It’s been a busy year.

Herself turned 13 on April 12. So far, the teenage years have been great, though I have been under pressure to get up a birthday post. 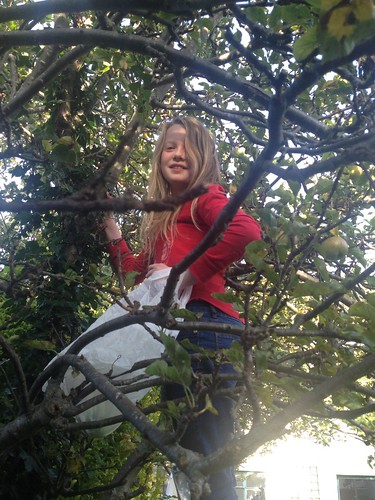 This was her first birthday in secondary school. It’s been a big transition. I think she quite likes the range of subjects although she is still appalled by the amount of homework. It’s a big step up from the primary school regime of half an hour a day and nothing on weekends.

The soulful look of a child whose parents have made her come out for a walk and lunch but who knows that she still has two essays to write: 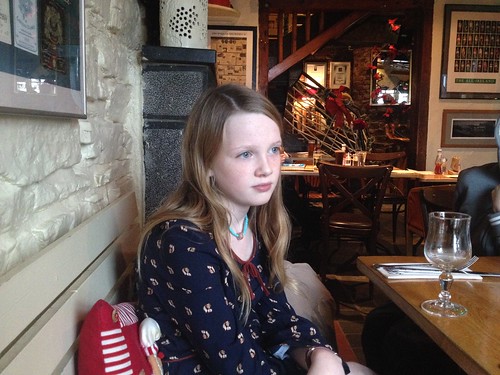 She is on the student council at school (hands up anyone who is surprised) and the teachers are all pretty impressed by her ability to speak to a crowd. She is student of choice to deliver messages to the student body either live in assembly or over the tannoy. She really is a great public speaker. She regularly reads at mass and is very good. I said to my father recently that her reading of a passage from Apocalypse at mass was outstanding; she read clearly and, by appropriate pausing, showed that she fully understood what she was reading. “It it was Apocalypse, that would be extraordinary,” he commented dryly.

Her school, like many others, is run by a trust and a couple of weeks ago, the trust brought all the school councils from the trust schools together for a meeting. A man from the trust came to talk to the students in advance. “I suppose,” said he, “you girls will want to do the buns and the tea.” Herself said, “I would be comfortable with a more active role”. “You can hold the microphone then,” he said kindly as he doled out speaking roles to all the boys in the room. She was outraged. I was outraged on her behalf. I said to Mr. Waffle, “This would never have happened, if we had sent her to an all-girls school”. “Mmm, but it’s not an all-girls world out there,” he replied. Still I feel it’s tough on her. That said, her school is fully using her talents so I suppose we have to just chalk it up to bitter experience.

Entirely as an aside, the event itself was a bit dull but a highlight was the students from English schools – English Catholics are just a very different breed from their Irish cousins – with their blazers with prefect badges and the like. When all the groups had to design a poster; the English schools did theirs in Latin. Ah yes.

She’s been singing a lot this year between school and church choirs and learning about music in an extra curricular class. This last has been a source of much bitterness and, at Easter, driven to distraction by her complaints, I said that she could give it up. But she hasn’t, she says she can’t face telling the teacher who has gone from a class of 30 to a class of 4 over the course of the year. I think it’s good for her because along with PE it’s the only class where everything isn’t easy for her. She remains to be convinced.

This is not our piano which remains untuned and unrepaired. A source of pretty much constant reproach from all of the children. 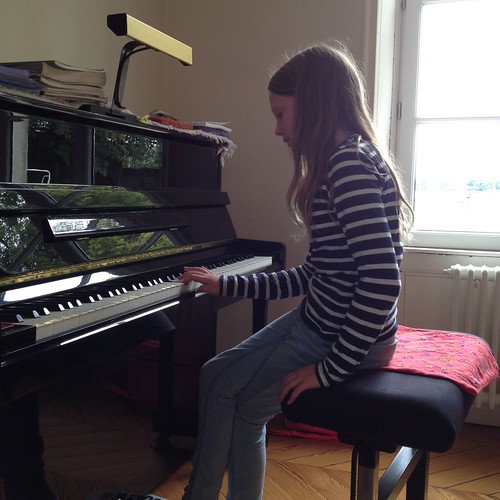 Her favourite subject is geography because her teacher is outstanding. She is also funny. When they were on their school tour in Italy, one of the children got sick on the bus. As the geography teacher cleaned up, she remarked to her charges, “Tell your parents that this is why teachers get long holidays.”

Based on the enthusiasm of the geography teacher, she made us go to Clare because she wanted to see the Burren. She was able to tell us a lot about the landscape but all in Irish. 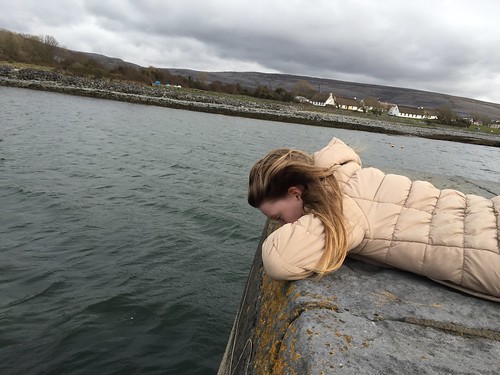 She seems to be warming to the Irish language. Her vocabulary is superb although she is a bit vague on the English terms for some geographical features/scientific terms. I daresay she will pick them up fast enough, if she needs to. She did ask me when I thought she would need the ability to describe coastal erosion in detail in Irish. I was thrown back on my mother’s advice which, as I told her, I have empirically found to be true: “Knowledge is never wasted.” 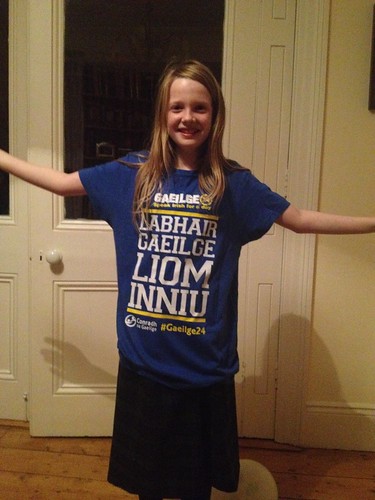 She is brilliant at dressing up herself and her brothers for Halloween and random dress-up days in school. The latter invariably come at about 12 hours notice and without her, our goose would be cooked.

Here is the Annie Moore outfit which she pulled together overnight. 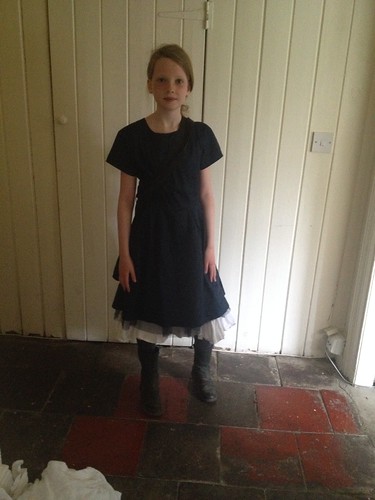 She is very funny and has a lot of interesting things to say. She is good company. She gets on well with the extended family and they always seem suitably pleased to see her.

She is very dutiful, responsible and reliable. Like all eldest children, I think we probably expect more from her than we do from her siblings. By the time the younger children reach that age, we’ve already been through it once and we are much more relaxed. She loves her brothers but the three of them drive each other crazy. Either brother on his own is fine but there is something about the combination of both that she finds very trying. It has to be said, in combination, they too can find her trying. Sarcasm is not unknown to her and she does like to have the last word. 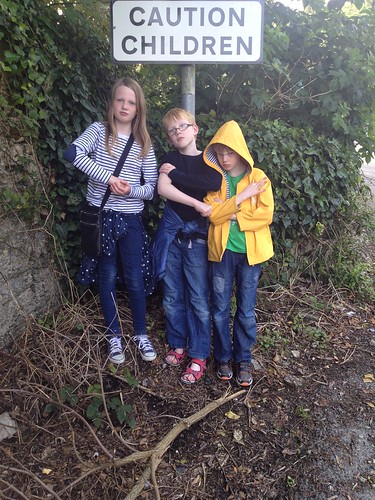 She cycles to and from school which is terrific. She likes the autonomy, although she hates the cycling. She is ludicrously punctual. School begins at 8.32 (I don’t know, ask the principal) but she likes to be there at 7.30 when the doors open. A couple of times when I have had early meetings, I have suggested we could cycle part of the way together but I am always too late for her and she is chomping at the bit anxious to be off. She did not get this from me. It’s great that we can cycle together into town to go for a cup of tea or visit a museum and I no longer spend part of the journey fearing that she is going to die due to unpredictable cycling habits; a sensation which is still, occasionally, available when cycling with her brothers.

She played a little badminton over the summer but she is basically unenthused by ball sports (ok, yes, in this case a shuttlecock but you know what I mean). 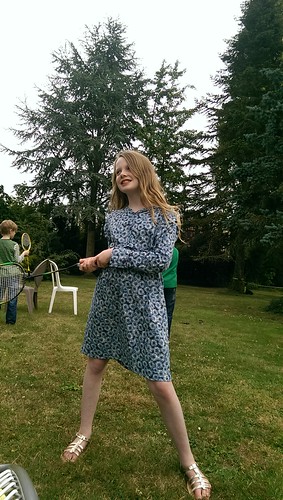 She loves the beach though. She can spend hours happily playing on her own beside the sea. Even on freezing Irish beaches. 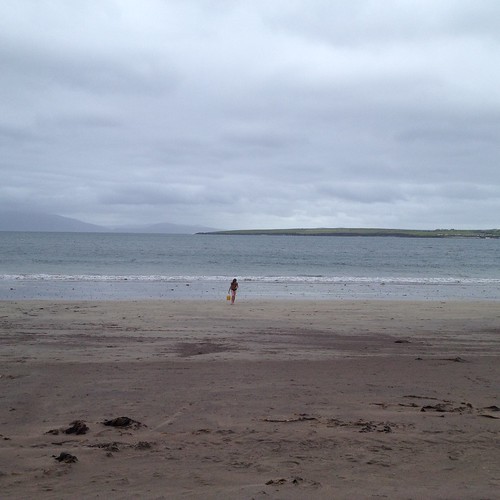 I am slightly in despair about the state of her room which is rarely tidy and where my presence is profoundly unwelcome (to be fair, all of us are unwelcome in her room but I am the only one likely to tidy it). But then she did an amazing job on her bookshelves and the other night she cleaned the kitchen within an inch of its life for reasons unknown, although this was a very welcome development.

She continues to be a far better cook than me and is now making dinner one night a week in exchange for pocket money. We had seafood risotto this evening. It was superb. I understand these things can skip a generation. She made lemonade the other day, just because (please admire food styling, she could pin that except that on pinterest her focus is on her grammar board, of course it is): 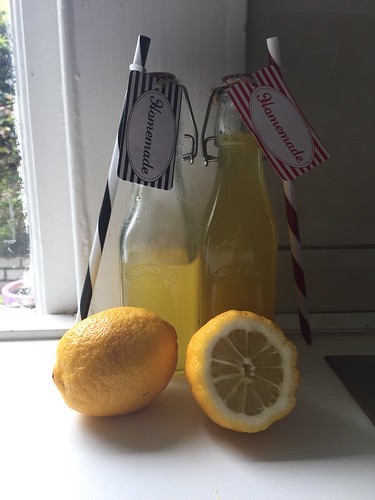 She has an excellent vocabulary to describe things that, at her age, I was blissfully unaware of. For example, the other day she played me a 2014 version of the song Cecilia. “That’s nice,” I said. “Meh,” said she, “you didn’t see the video with its appalling objectification of women.” She continues to read and re-read Shakespeare’s plays. Her English teacher had forbidden her from reading the only book on the prescribed reading list for Junior Cycle which she has not already read. She’s read it now; that’s proscription for you. She finished “Animal Farm” the other day. “So sad,” I said. “So many interesting ideas,” she said. She is tough; “I am David” is apparently the only book that has ever made her cry. I’m always sniffing over stuff myself. 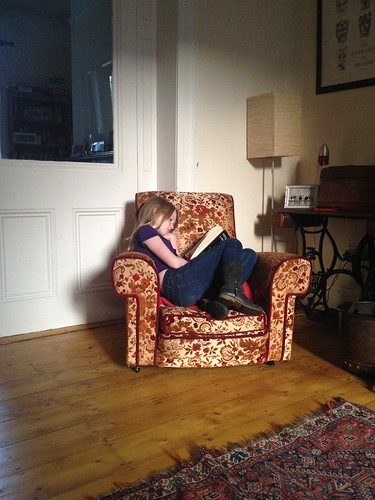 Below is the picture she describes as the “cultural appropriation” shot. Fine. 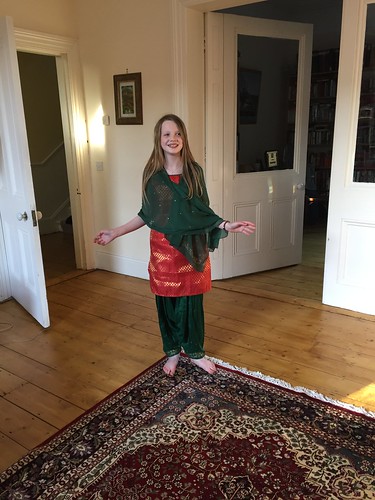 She has been urging me to take her to get her hair cut since February. Mr. Waffle finally took her today. It looks lovely. She looks very grown up all of a sudden although, as she often tells me, she is the smallest student in the school. I think she’s probably due a growth spurt. In any event, there will be new first years in September and, as I tell her, she’s bound to be taller than them. 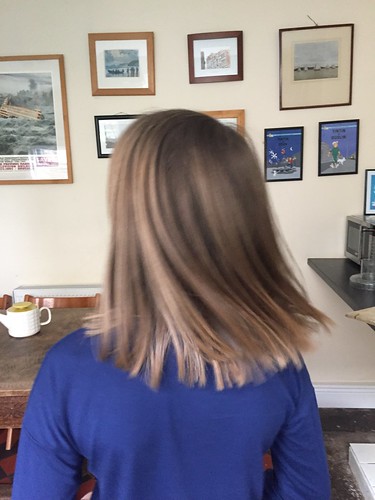 In short, she is delightful and we love her. 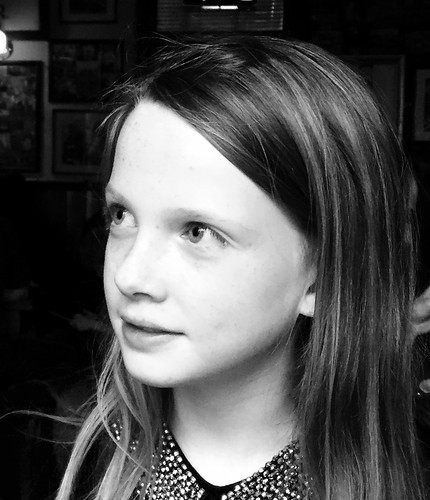