So Christmas day passed off peacefully enough. Herself was displeased with her offering from Santa “Why does Santa hate me?” but otherwise all was well. We went out to the cousins for drinks with extended family but it was just ourselves at home for dinner which I really liked. I am not the world’s greatest natural hostess and I find it pleasantly undemanding when it is only family for dinner. 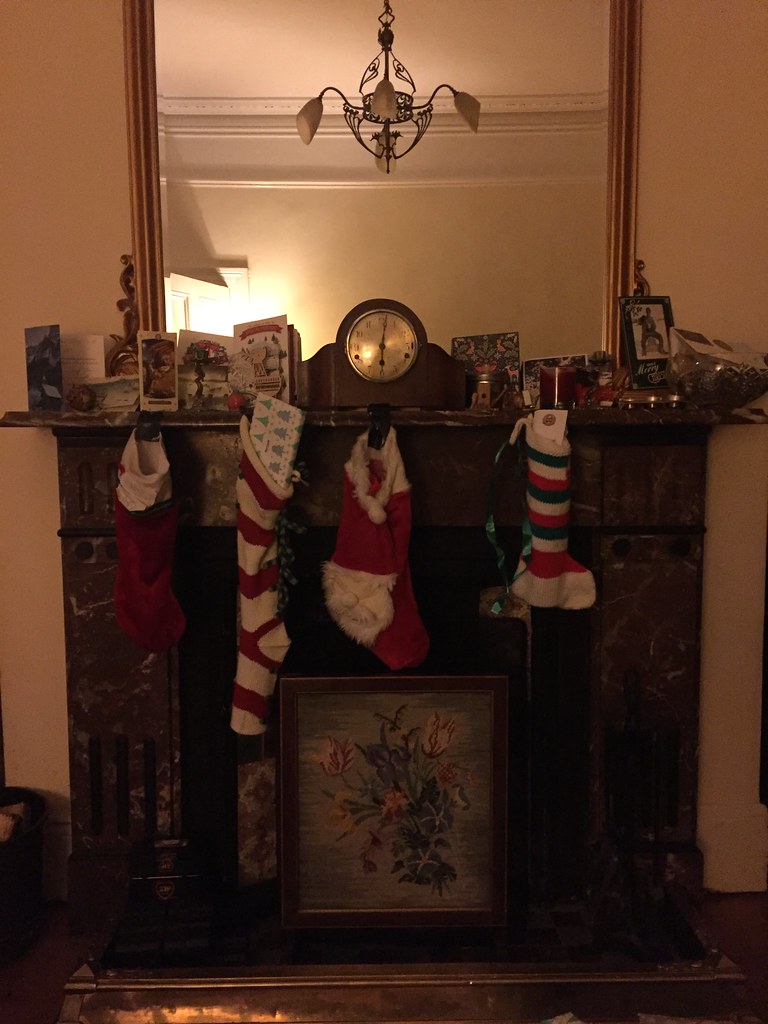 Our crib shepherd lost a head at a crucial moment and so missed most of the big day. He was taken out by a large book on Dr. Who which hit him inadvertently. It was suggested that he might be renamed St. Denis for this year only (his head is now safely superglued back on his shoulders). 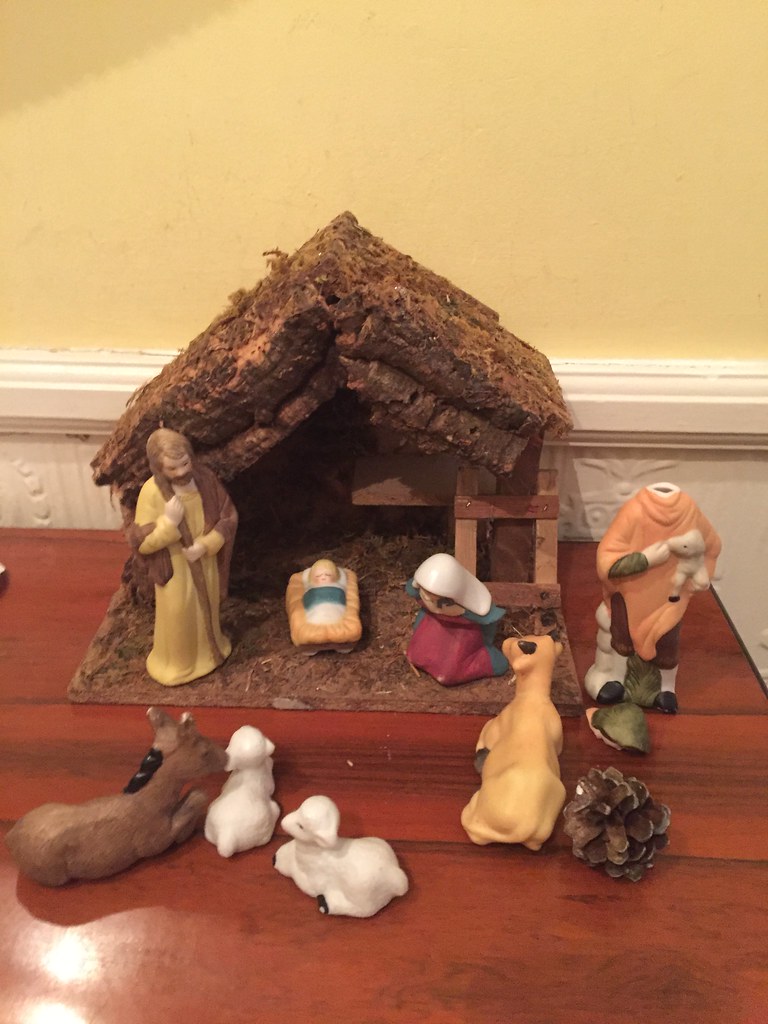 On the 26th we went on the traditional orienteering expedition in the Dublin mountains with the cousins. For the first time ever, as far as I can remember, it did not rain. 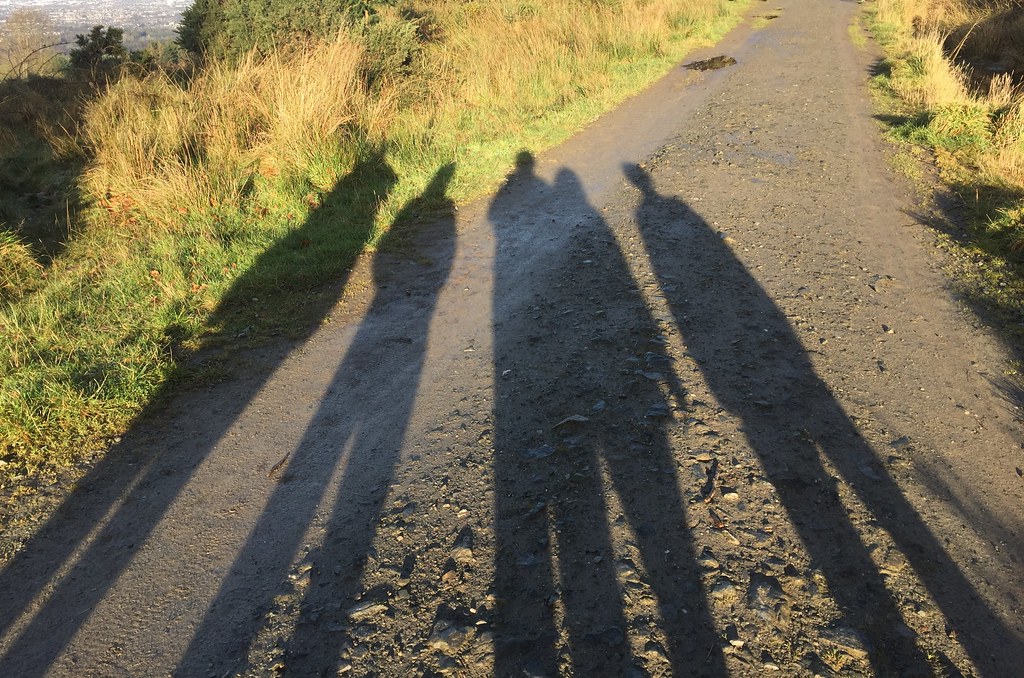 That evening, herself went as emergency babysitter to the three year old child of friends who live around the corner. It went very well and she sees a lucrative new income stream opening up.

On the 27th we went to Cork where a vast array of exciting presents awaited. We stayed in our friends’ place in East Cork and went up and down to Cork city for various excitements including ice skating. 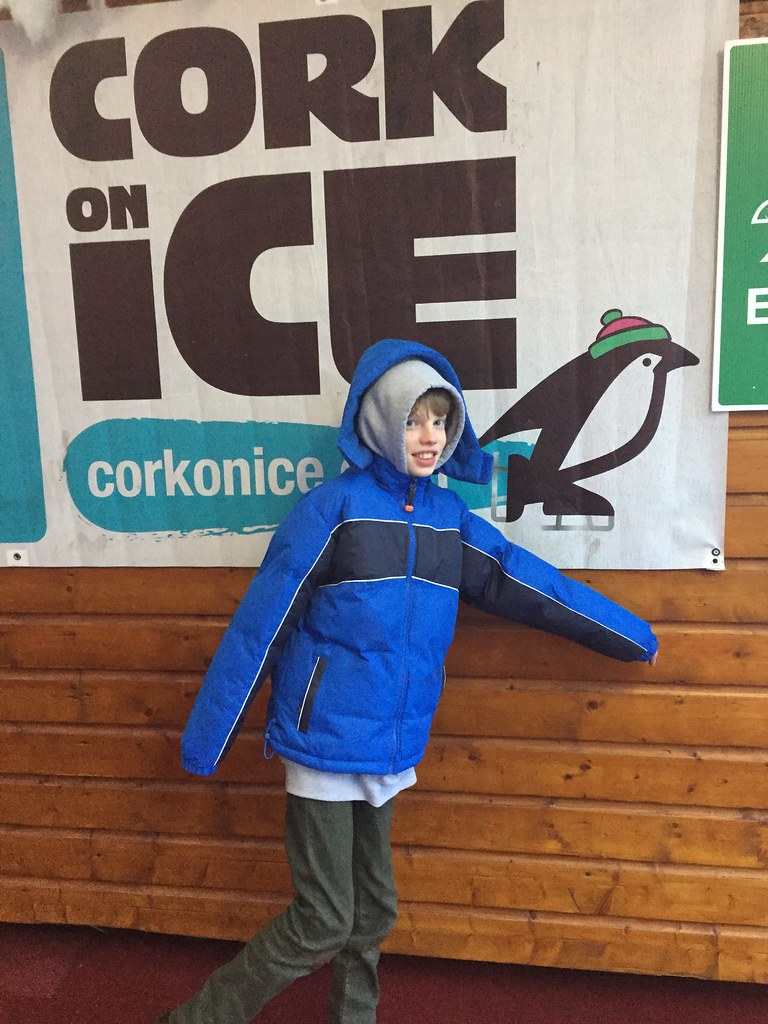 We did the Ballycotton cliff walk which was spectacularly muddy. We ran into another family; the mother was American and was walking along with a child in a sling and the father was Irish and admiring the view. They also had a two year old splashing through an enormous puddle. Her mother kept begging her not to run through the puddle; advice which the child ignored with unfortunate but not entirely unexpected consequences. I felt very sorry for the child and her mother. I did think her father was quite useless. Herself has urged me not to be so judgy but I said, “I bet your grandfather was better than that in the 1970s.” When we checked at her insistence, however, he indicated that he too would probably have looked at the view. I refuse to believe that. Like his granddaughter, he is not judgy (other than about politicians, oh my goodness, lots of judgements there) and I feel he just wanted to exonerate the father from blame. I digress. Thanks to our new boots and greater height and motor skills than the average two year old, we remained dry. 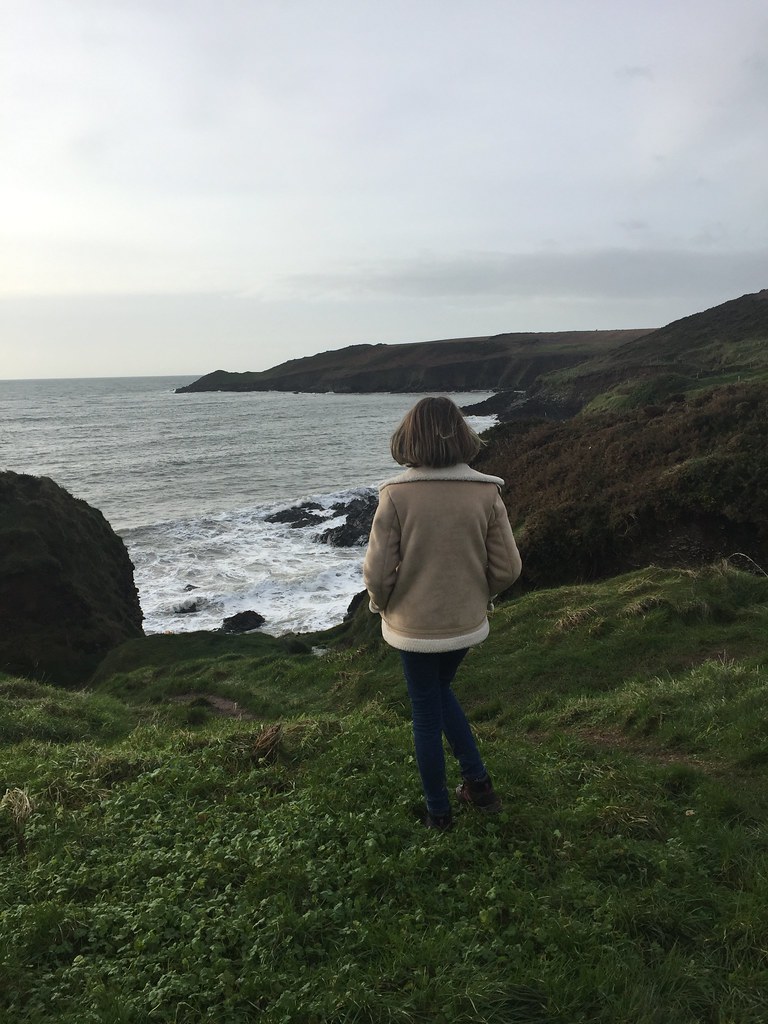 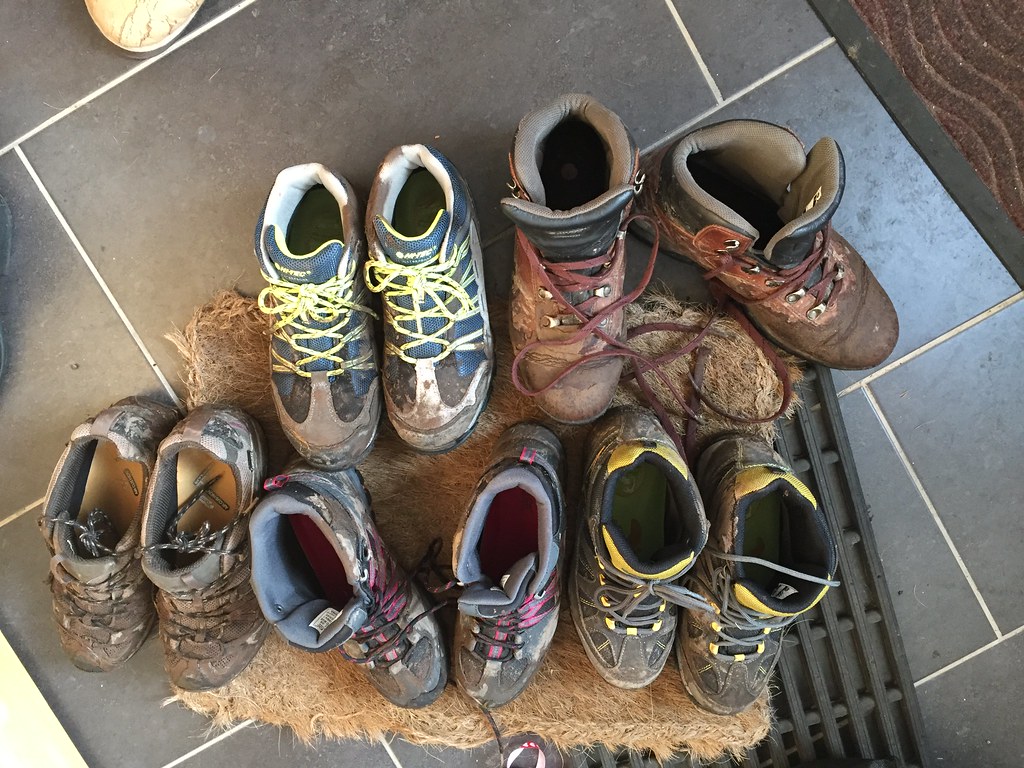 That evening, my sister and her partner took the boys to the new Star Wars film and dinner in Milano’s. Herself, Mr. Waffle and I went for a more sophisticated dinner option together which she quite enjoyed (she tires of Milano’s but her brothers never will).

We finished our Christmas holiday jigsaw. Almost unbearable excitement, I know. The house in East Cork has no television or wifi which I really enjoy. The children, slightly less so, though not as much less as you might imagine. 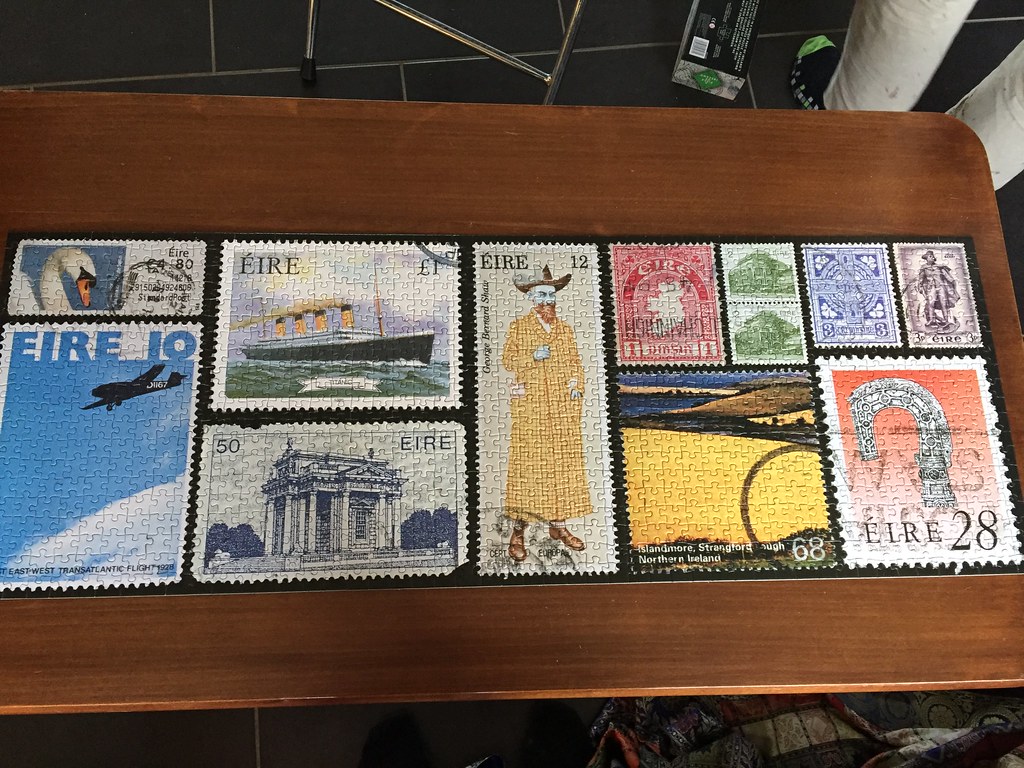 We were back up to Cork the next day where my brother and sister made a very elaborate family dinner for ten where the Yorkshire puddings were a highlight for Daniel and Michael. My brother bench pressed herself; this is the kind of quality entertainment that is available at family dinners. My father told us about his first meeting with my grandfather, his father-in-law to be. My mother went off somewhere with my grandmother and he and my grandfather were left to cope alone. My grandfather asked him whether he would like a drink. He would. At the time, my grandfather was going blind and after rooting around the cupboard, he emerged with a bottle of whiskey and poured out a measure for my father. He didn’t take any himself. My father who was a keen whiskey drinker was pretty sure that the contents weren’t whiskey but pretended to drink filled with fear that it might be some terrible poison – my grandfather was a farmer and farmers are or certainly were, inclined to fill random bottles with agricultural supplies. When my mother and my grandmother came home, investigation proved that the non-whiskey drink was actually Lourdes water. Also on herself asking him about living in American in the 1920s (long story, he did), he recollected turning off all the lights in the house commemorating some anniversary of the lightbulb. It must have been quite the shock coming back to Cork with its oil lamps in the 1930s. He also was quite adamant that it snowed while they were in America, given that they were living in Orange County, South Pasadena (apparently the South was important), that seems a little unlikely but he is adamant.

That night, we had games night – Michael got a number of games for Christmas and he was keen to try them out. It was actually quite good fun though slightly hideous in prospect.

On new year’s eve we went for our first walk on the beach since arriving. It started to lash rain/sleet and we ran to the hotel hoping that it might give us lunch but, sadly, no. Mr. Waffle and herself braved the rain and got the car and we went to the Kilkenny shop in Shanagarry instead. We met a good friend of mine from Dublin there with her family which was quite random and proves that Ireland is tiny etc. She and her family were reliving her husband’s childhood family holidays in Waterford and their exploring had taken them into East Cork.

Then back to Dublin. We bought a “Best of Queen” CD and a 5 set CD of hits from the 80s to listen to on the journey (mock, if you will). I can confirm that Queen had more lasting hits than all of the 80s put together. About half way back I started to feel unwell (unrelated to the hits of the 80s). By the time we got home, I was very unwell. I spent the remainder of the evening getting sick and could only lend half an ear to the various woes involving the cat (neighbours had wrong keys, had gone out and bought cat food and sent their teenager over the garden wall to put out cat food for the cat every day, frankly, above and beyond the call of duty). About 11.45 in a brief break from my time in the bathroom, I headed downstairs to wish Mr. Waffle a happy new year. He was just heading off to rescue herself from a new year’s eve party. All in all, we have had better starts to the new year. I finally stopped throwing up about 3 am. I firmly blame the grilled brie in the restaurant where we had lunch for my brief but violent illness. The next day, feeling delicate, I was sitting reading the paper while the boys played their new videogame (Overwatch, very popular), “I am a one-man apocalypse,” hissed the character on screen. Herself lent across the sofa and said to me, “It’s the brie speaking.” Oh yes indeed.

Mr. Waffle’s sister, husband and baby came to Dublin from London for a couple of days at the start of the month. We had them round for an extended family lunch before I trudged dismally back to work last Thursday. We had the tree yesterday for Women’s Christmas but it came down today and the children are back to school tomorrow. Alas alack. 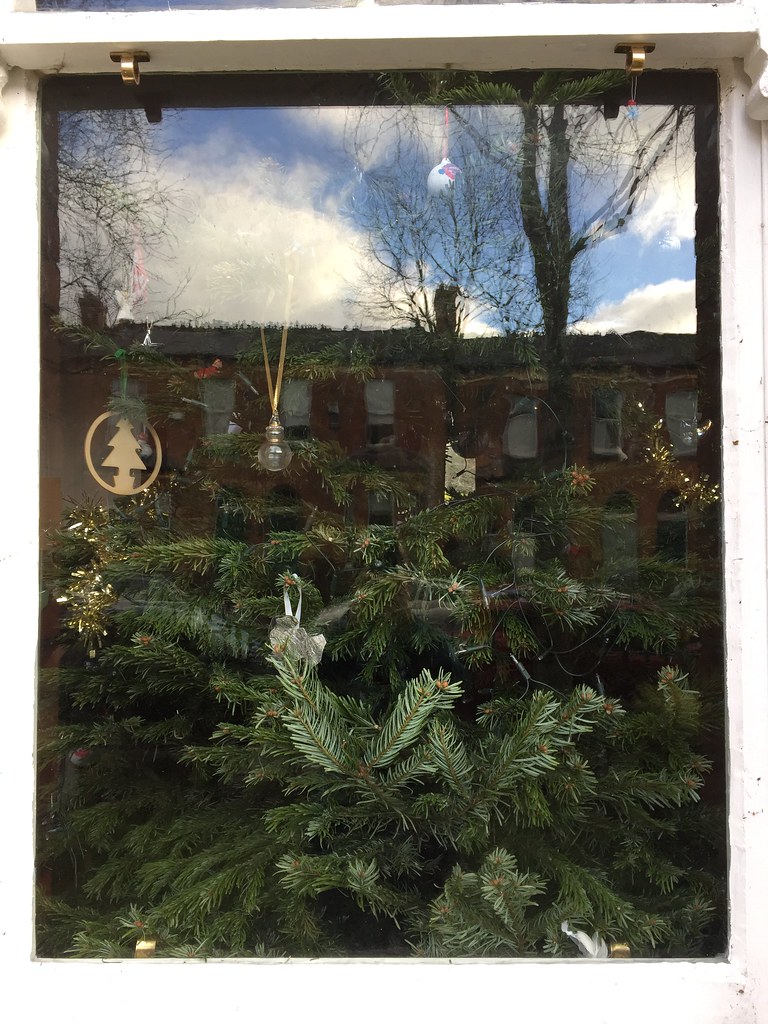 In other news, over the Christmas holidays, Daniel and Michael lost a tooth each. Seriously, when do children stop losing teeth? I think herself still has some to go and she’ll be 15 in April.

How was your own Christmas?