On the last Saturday of every month, everyone on the street goes out and cleans up all the litter, fallen leaves etc. Every time we do this, Mr. Waffle thinks, not without bitterness, “Here we are, doing the council’s job for them.”

Last weekend, Mr. Waffle was the man designated to pick up the special litter bags from the local council office. As he picked them up, the man behind the counter mused, “It would be great if you could do something over the Christmas holidays.” He added, generously, “We could throw in a couple of bars of chocolate.”

And, lads, this brings us to the end of November. It’s been a marathon; thanks for reading along.

Daniel got a negative PCR test. The relief!

Last night I had an anxiety dream where I was zip lining in the Swiss Alps. Despite the fact that I was sure that I was going in the wrong direction, I was assured that I was not and headed off. Half way along there was insufficient momentum (exactly as I had predicted) and I hovered over the middle of the valley completely stuck.

This could be about work or about Covid or about my inner certainty that I am always right, if only people would listen to me. Memorable though.

Mr. Waffle took Dan to the airport for a fresh Covid test in an abundance of caution (mine). Mr. Waffle got up at 5 in the morning yesterday to book it and then they had to wait two hours for him to take it. Alas. We await hearing.

In continued surprises from Sunday mass, the priest quoted from Emily Dickinson’s “Hope is the thing with feathers” in his sermon in a bid to cheer us all up as we contemplate the next Covid variant (how soon before we run out of letters of the Greek alphabet, depressingly soon by the looks of things?).

In England herself says she is feeling a bit better.

I went into town to do some Christmas shopping. No joy really but town was looking very nice with the Christmas lights up. 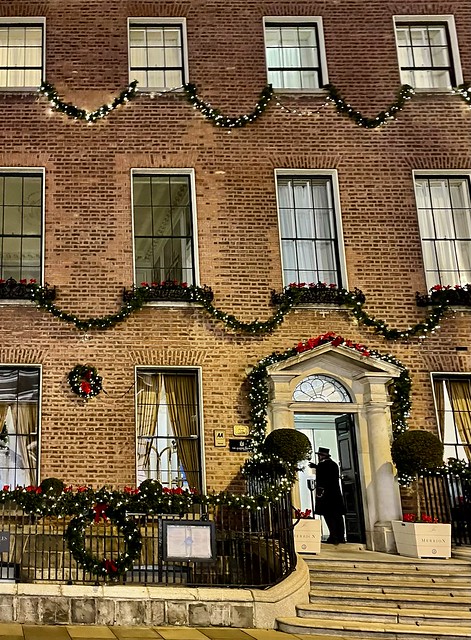 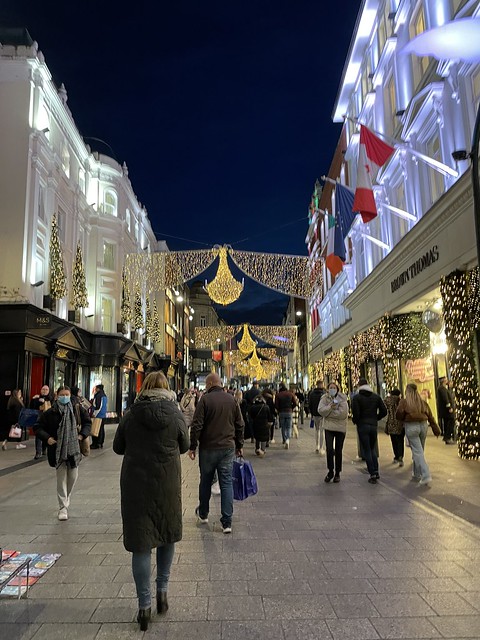 Inspired by Emily, I went into Bewley’s for a cup of tea. More accurately, I joined the queue for tea outside in the freezing cold. When I got to the door, I could not find my mask so I left. As I bitterly put my stuff into my bicycle carrier, didn’t the wretched mask fall from between the pages of the paper? I hummed and hawed but went back and joined the end of the queue and waited and waited. A waitress came out to the frozen pundits on the street and said it would be half an hour for a table. I was committed at this stage. 15 minutes later, her colleague came out and said it would be 20 minutes for a table (ok, I suppose) and as they closed in 20 minutes, there was no longer any point in waiting. I was incandescent with rage. I went to the Queen of Tarts, an old favourite of mine, closed, looked a bit permanently closed, I do hope not. I cycled homewards in the freezing cold and stopped off at a local old reliable cafe. Closing and unable to accommodate me. That’s right, a city of nearly a million people and not a cup of tea to be had. I got home having spent nearly two hours trying to get a cup of tea. Snort.

In other Advent news, my sister gave me an Advent calendar in the form of a box of skin and beauty care. As it was the first day of Advent I pulled it out from under the bed. “Beauty lies within” it announced. “Surprisingly frank,” I thought for a moment. Honestly, could they not have chosen a better slogan? I had to ring her up to find out how I was to use the first item I received, I think it may be a bit sophisticated for me and my beauty regime.

I went out to dinner with three friends this evening and then we went to a comedy gig afterwards. Great evening or super-spreader event? Perhaps a bit of both. I miss the old days when going out didn’t feel mildly criminal.

So, back to the dentist to get my tooth fixed. This afternoon he did prep work which involved a fair amount of drilling. At this moment, I have a numb mouth and a temporary crown. I’m back in on December 17 to get my permanent crown. The Friday before Christmas, I rejoice.

In other news, herself appears to be improving, I base this on the reduced communication levels. She has had one of her poems published in a college magazine and is pleased.

And, finally, something else in the good news side of the ledger. I am very, very slowly making my way through a fat volume on the history of Dublin. There was a passing reference to the Worth Library which I had never heard of before. I emailed to find out about visiting hours and I got a lovely telephone call from the librarian, thanking me for my interest and pointing me towards their online exhibitions. Alas, they are closed due to Covid but hope to open up to tours again in the Spring. I am quite excited. Middle-aged thrills.

So off she went for her PCR at 11.30 this morning and at 8.15 this evening she got her positive result. Alas alack though impressively speedy work by the British testing people, I must say. I spoke briefly to her this morning and she was pretty miserable – in a bad cold kind of way – but not at death’s door.

My sister is a big fan of moonpig which does personalised cards. She went online and got the Princess a card with a personalised message and my sister’s cartoon of a corona virus on the inside. Unfortunately the site kept crashing and my sister had a lot of difficulty with it. This is why the personalised greeting card has, “Get well soon, Caroline!” on the front. The Princess’s name is not Caroline. Funnily enough when I mentioned moonpig at home, both boys said, “Uh oh, data breach,” so perhaps not where you should go for your personalised greeting cards.

In other news, we had online parent-teacher meetings for the boys this evening. This was extremely stressful. I had to be in the office and called in from there and Mr. Waffle and each boy in turn were tuning in from home. The format was five minutes per appointment. It was like academic speed dating. I turned up in other people’s meetings, they turned up in ours, I couldn’t get in to some teachers, the home team couldn’t get in to others. I mean it was better than nothing but I wouldn’t call it a triumph for new technology. On the plus side the teachers love my children. They’re both doing fine, thanks v much. My favourite nugget from the evening was the following: Michael tends to finish his in class economics exercises ahead of the other students and when he’s finished, he pulls out his book from his bag and starts reading, an activity which is apparently tolerated by the economics teacher but he is keen that Michael would stop reading promptly when class recommences. I can imagine.