I went to see a revival of “Borstal Boy” by Brendan Behan in the Gaiety earlier this week. It is very long and contains more song and dance numbers than you might expect but it has its moments.

On Friday night it was culture night so, we had book doctor prescriptions from CBI in the Writers’ Museum [your children tell adults who are experts in children’s books what they are reading and they recommend what they might like]; we went to the Mendicity Institution which was really interesting and where we got soup made to the original 1818 recipe (very glutinous); and we had a stroll around Merrion Square which was mildly interesting. There was a very long queue to get into number 29 Fitzwilliam Square – a Georgian House Museum so we skipped that and I promised to take Herself another day. We went yesterday and had the place largely to ourselves – entrance fee €6 for both of us – so I feel that was money well spent. 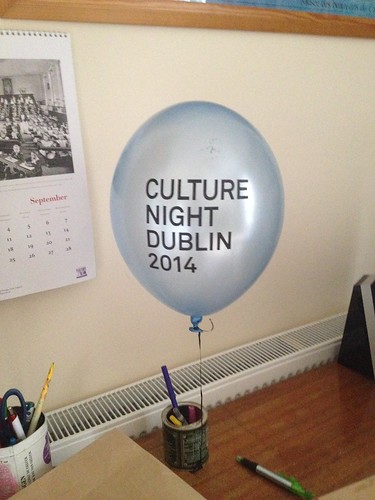 Last night, Mr. Waffle and I went to see “The Belle Bottoms” in the Fringe Theatre Festival – an hour of funny songs inspired by the 70s. It was written by Eoin Colfer who writes really terrific books for children. I had hopes. They were dashed. Mr. Colfer was in the audience. I nearly went up to him and cried, “How could you do this to us? Do you know that we paid for a babysitter to be here?” I didn’t. I did manage to lose my keys on the cycle home though. Alas.