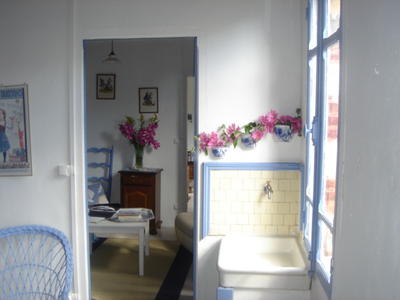 Very attractive
Beautiful garden
Very happy until Thursday when it started to rain and continued to do so largely non-stop for the remainder of our visit. Realised house was damp and small. Garden was wet.

The Place
Le Crotoy is a small resort on the north coast of France which enjoyed its heyday about a century ago. Lots of faded grandeur. There was a flying school. It had to close down in the early 1900s when a “careless pedestrian” was beheaded by a plane. Apparently the Caudron is a type of plane developped by the flying brothers and much used in World War I. Jules Verne liked the place and spent a number of years there. It is where he wrote “20,000 Leagues under the Sea”. This is a little ironic as to actually get deeper than a foot under water in the baie de la Somme you need to wade to England. This was my first ever beach holiday where I didn’t swim. Just too far away to walk.  Other little Le Crotoy factlet: the parfumier Pierre Guerlain was a local boy and he built a big hotel called Les Tourelles which he hoped that his patron the Empress Eugenie would visit for her Summer holidays but she went to Biarritz instead and poor old Le Crotoy’s doom
was sealed. Les Tourelles is now owned by lots of Belgians
(including, bizarrely, my gynaecologist) and impossible to book for dinner. The whole place is full of Belgians. To my intense delight I was taken for a Belgian in a local shop. On
emerging from our rented accommodation one day, the Princess pointed to the little boy from next door and said “Matteo”. His Da looked at Mr. Waffle a bit oddly and the latter explained “my little girl thinks your little boy is called Matteo”. “But he IS called Matteo”. It emerged that they knew each other from the creche. Being little Belgians the infants took this meeting in their stride, exchanged kisses and suggested to their fathers that it was time that they moved on.

Haircut for the Princess and myself. She sat entirely composed through her first haircut and pronounced herself pleased with the result. I, on the other hand, was crushed, apart from the usual haircut disaster, the woman asked whether we were staying in the local campsite. I went camping with my parents for years, I know what people staying in the local campsite look like. General chat confirmed the overwhelming impression that the place was chock full of
Belgians. Indeed Madam commented that she goes on her holidays in February and that she often coincides with the Belgian week on the slopes, so it’s a home from home really.

St. Valéry Sur Somme – neighbouring town visited extensively in the rain. Not good in the rain.

Steam train between Le Crotoy and St. Valéry Sur Somme (please see observations on the attractiveness of the latter in the rain).

Beach – immensely popular with the Princess in all weathers

Abbaye des Valloires – did we really pay 15 euros to see gardens? The rain can make you do funny things.

Undoubted highlight – the arrival of the royal grandparents for a week. Much rejoicing by the Princess and her parents.
Endless stories for her, nights out for us and a marriage saved. Grandma joined us on crutches with a broken hip – three cheers for Grandma. We were able to rent a wheelchair in the local pharmacy for 16 euros a week. The pharmacist explained apologetically, the charge was as we were not entitled to social security. Isn’t France a wonderful place?

If you have even the mildest interest in other people’s holiday snaps (and why should you, I ask myself?) you may inspect them here.

Gosh she’s growing up so fast!

Ha ha! I love the infantile socialising. Miles ahead of us.

Hjb – you personally or just Switzerland?
Norah – yes, weird eh? Thanks for the sweetie.
Sus – well, clearly…
JD – Ask Norah, she started it.
Pog – Pretty, but damp, I fear.

No, not really. I would have thought it would be hard for a landlocked mountainous country to flood, but climate change is exciting for everyone obviously.

Good to see you back. Next year?

Hiya BHM. There will be no holiday next year…