We went to dinner and the theatre on Friday night. I’d booked a Christmas show and instructed my menfolk some time ago that they were to pretend to be pleased on the night. They dutifully delivered.

The show was “All the Angels” about the first public performance of Handel’s Messiah. Coincidentally it took place around the corner from the Smock Alley theatre where we went to see the show. All the big hits from the Messiah were included in the show and it did feel reasonably Christmassy but, sadly, one of the actors was indisposed (Covid, I bet) and his part was covered by someone reading from the play. Sadly, his part was Handel. In fairness, the guy reading did a good job but it did take from it. Still, the singing was nice. Michael gave his customary standing ovation at the end despite Daniel saying that you can’t give a standing ovation when one of the actors was reading from the script. Fair.

Then last night we went to the cinema to see a live streaming of a new opera – Eurydice – from the Met. Friends invited us and, to be honest, I was absolutely dreading it. Three hours of a new opera. It actually wasn’t too bad. No one is more surprised by this than I am. The staging was amazing, the libretto was clever and the music wasn’t discordant and jangly (though as Mr. Waffle pointed out, not a single tune).

I did some preliminary Christmas decorating. I think we’ll wait for herself to come home before putting up the tree.

Then today, I had bookclub in a back garden. Our hostess provided rugs, mulled wine and hot water bottles and it worked pretty well even though it was freezing. I don’t think I will ever again take the joy of seeing people in person for granted.

I went out to dinner with three friends this evening and then we went to a comedy gig afterwards. Great evening or super-spreader event? Perhaps a bit of both. I miss the old days when going out didn’t feel mildly criminal.

Two of my colleagues have Covid this week. Both fine, thankfully but not loving the general prevalence levels.

Meanwhile my brother-in-law and his family were due to go skiing in Austria for a week at the start of December. Alas, that adventure has been cancelled as Austria is in lock down.

In unrelated news, my teeth having basically caused me no problems whatsoever for the first 51 years of my life have really pulled out all the stops this year. I was sitting at my desk minding my own business when I noticed that a bit of tooth had crumbled off. This was at the site of an enormous filling and it had already been earmarked as problematic but having spent most of October in the dentist’s chair, I was holding off doing anything about it until next year. Until, of course, it fell out of my head. I’m back in for treatment on Friday afternoon. Sigh.

I met a friend for lunch and he told me how his daughter had to do research on Muhammad Ali for school, so she dutifully prepped away, she was on top of the Rumble in the Jungle. She went into school the next day and the teacher asked her, “What were some of the key events leading to Indian independence?” Mahatma Gandhi was who she was supposed to research apparently.

He also offered me this story which he believes to be true. I really hope it is. The teacher asked a child to get a guillotine, off she skips out of the class. She is gone for ages but finally comes back with 15 other children. “Sorry miss, I thought you said the Gaelic team”.

And finally, in the good news category, Emily Bell’s book is in the bestseller list. Extremely pleased by association.

It was a beautiful day. On the way home from mass, Daniel looked at me warily and said, “Please don’t suggest a cycle”. I am afraid that that is exactly what I did.

We met friends in the park who invited us to go to see Eurydice in the Met in the cinema (live streamed from NY to your local picture house). I blithely said yes for me and Mr. Waffle, the boys politely but firmly refused the generous offer. I thought it was the “Orpheus and Eurydice” with tunes but it turns out that it is an original composition. I fear the worst. As Mr. Waffle said about these much loved friends of ours, “It’s not just that they love opera but they love hard opera.” A three hour treat for December.

We had a lovely cycle. Even the boys didn’t hate it. 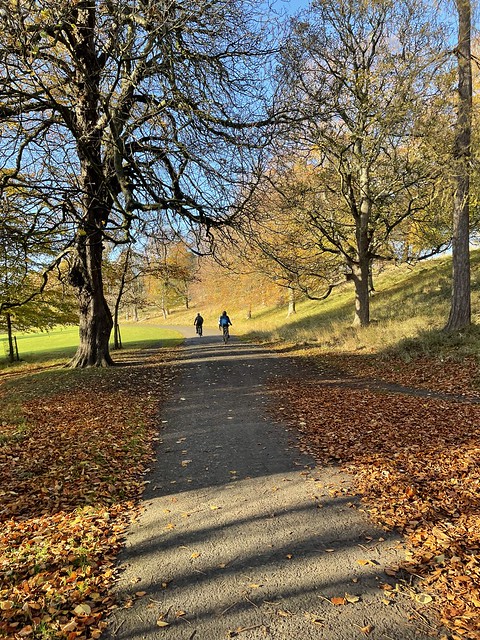 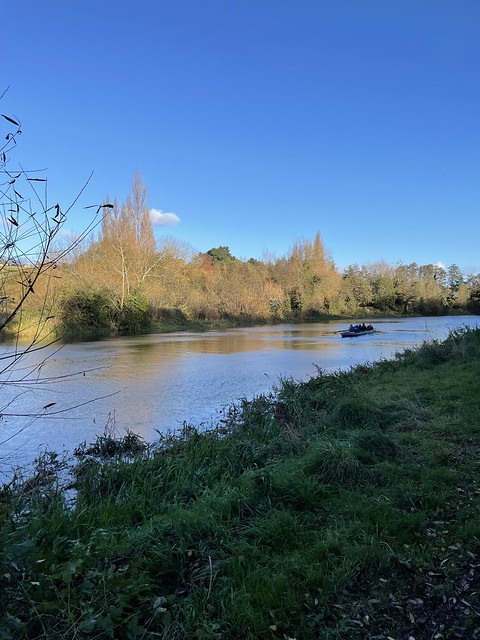 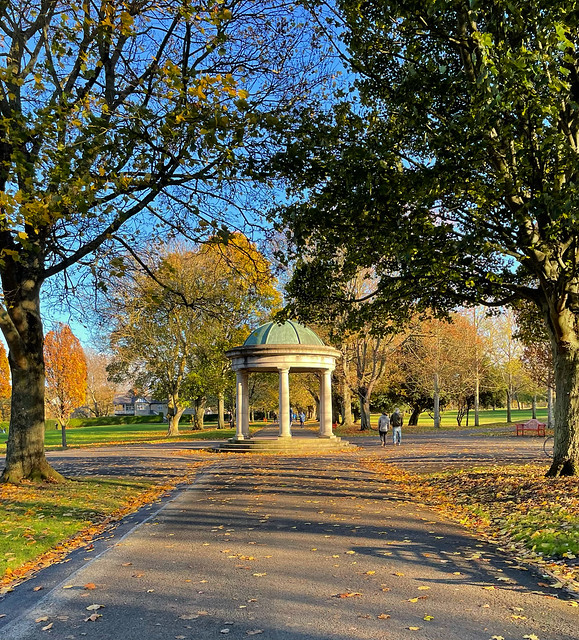 I peeled off and went to the museum to see the Eileen Gray exhibition, sending the boys on home on the basis that they had suffered enough. The exhibition was mildly interesting. I’m more of a good mahogany furniture kind of person than a modernist so not really for me but I could see it was good, if you see what I mean. Apparently she left Ireland in horror after they did up her family home. I mean, you can see where she was coming from. What an absolutely horrific thing to happen to a perfectly nice square Georgian house. 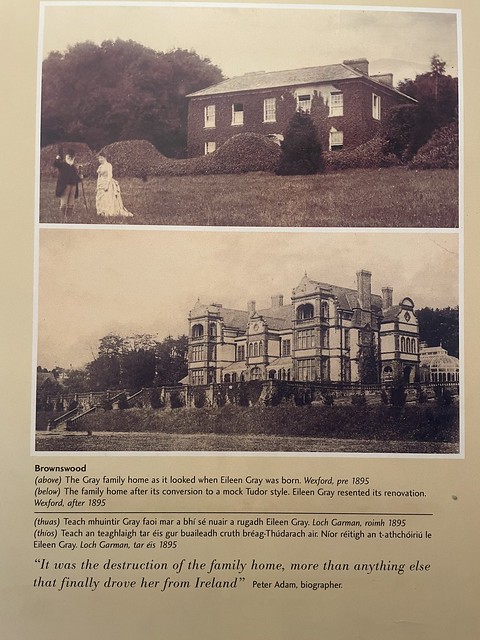 I was quite taken by the practicality of some of her more famous pieces. The chair that acknowledges that people sit to one side. 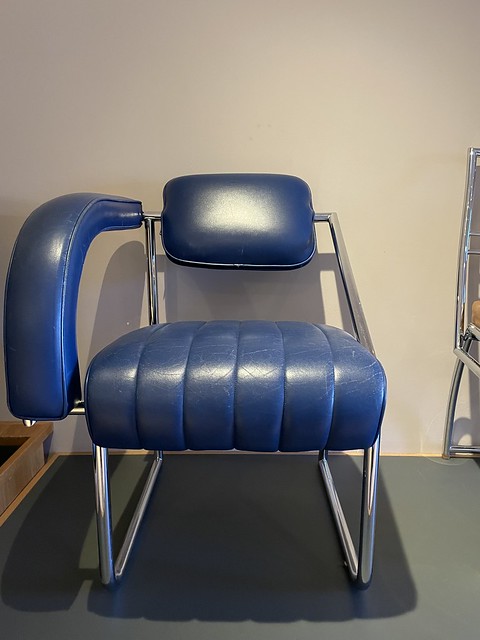 The “practical for breakfast in bed” table: 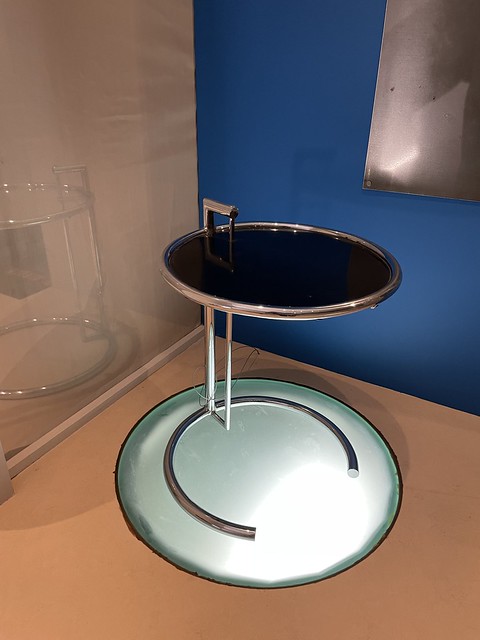 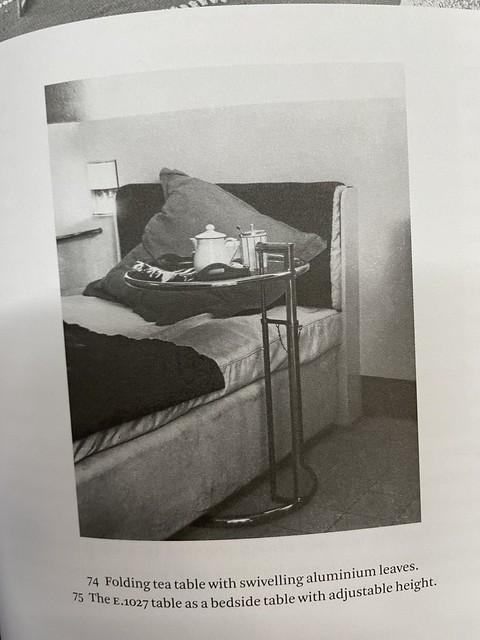 She had an extraordinary life and lived until 98 working away into the 70s. She lived long enough to see her furniture and ideas come back into fashion and in some ways, she’s the godmother of open plan living (though she seemed to have moved away from that in later life). Interesting.

My Monday night book club is more than 20 years old. People have dropped in and out over the years. I was off in Brussels myself for 5 years. Shortly before I went away, we got a new member. A friend of a friend. I didn’t really get to know her as I was off in Brussels for most of her tenure and by the time I came back, she’d married an Austrian and moved to Austria.

I remember visiting her once in her family home in the midlands accompanied by my friend. I remember it because they lived in an actual castle, a mock gothic 19th century castle. Freezing, naturally. And as well as being a very nice woman she was also very beautiful and she looked slightly otherworldly standing in the door of her castle welcoming us in (though wearing a warm woolly jumper rather than a diaphanous dress which would have been more in keeping as it was, as indicated above, freezing). She died at the weekend. She had cancer. She was only in her early 50s. I have been rejoicing recently in the many successes of my book club friends. That’s middle age for you. So is this, I suppose.

When my father died, one of his friends wrote to me; a lovely letter with a long description of his friendship with my father in their early university years, nearly 80 years ago. He is almost the last of my father’s circle of friends left alive. He’s in his mid-90s and is in reasonably good nick. His wife died at the weekend. She was in her 80s and had been ill. I feel very sad for him. He has two sons whom he adores and grandchildren too but I’m not sure how long he will last without his wife of more than 50 years.

I’m going to the funeral on Wednesday with my sister. More gloomy updates to follow, doubtless.

Today is the feast day of St. Laurence O’Toole, patron saint of Dublin. We heard a lot about him in mass this morning. This made me think that it might have been amusing to have named the boys Fionn and Barra in a Cork tribute. They were not amused by this hilarious suggestion. Sometimes I feel I am “wasting my sweetness on the desert air”.

I went off to visit the Museum of Literature in the afternoon. I’ve heard mixed reviews. I thought it was interesting enough – though a bit pricey at a tenner in. A bit too much Joyce and UCD for me notwithstanding the quote below which I enjoyed. 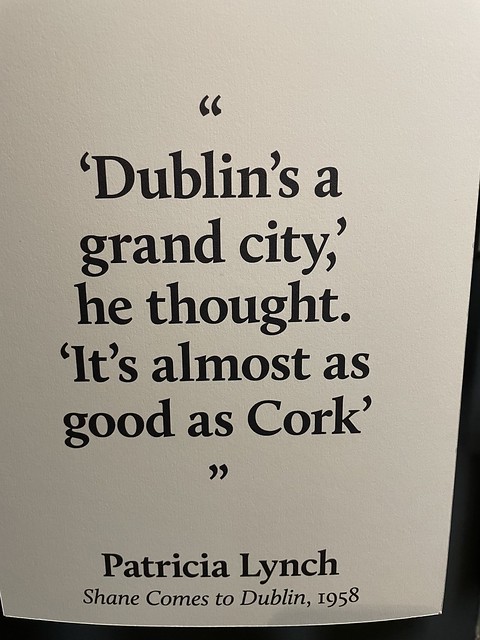 And a great Brendan Behan quote too (though I was confused by the 1997 date for the quote as he died in 1964 – I mean was this live reporting from the underworld? – but on googling this quote seems to have been from a collection of his columns published in 1997). 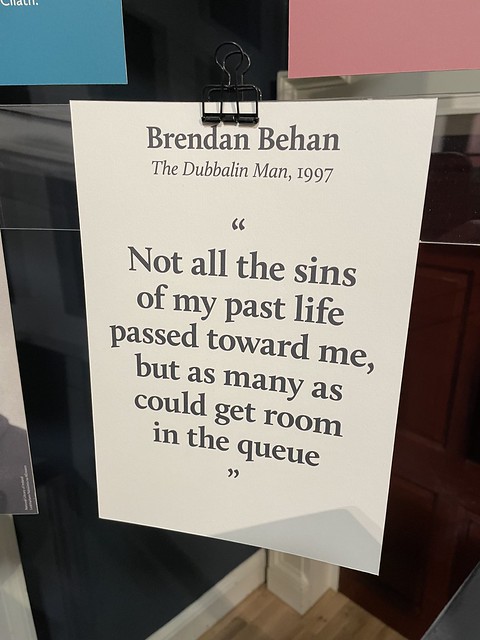 I’m glad that I’ve listened to the Ulysses audiobook in preparation for the hundredth anniversary of its publication next February because the city is going to go crazy. 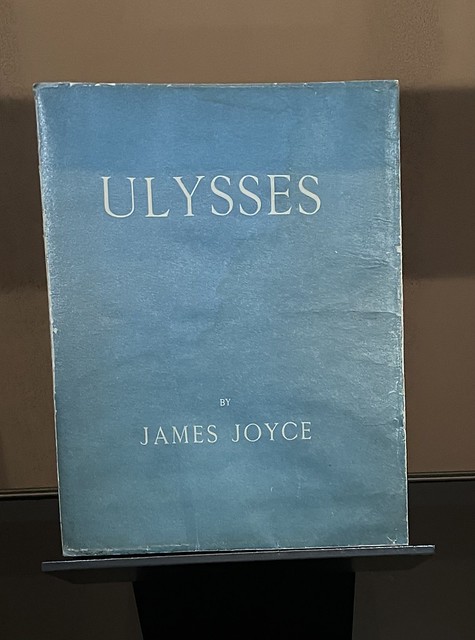 All the Christmas lights are up and town is full of people. Are we due another “meaningful Christmas”? I’m not sure I’m able for that.

The weather continues unseasonably mild. We tried to turn on the Aga yesterday but couldn’t get the wretched thing to light. As I fiddled with the pilot light, Mr. Waffle hovered in the background saying, “Swim, little polar bears, swim!” I sometimes feel he is not a fan. I see from the manual that it needs to be serviced regularly so perhaps a man can come and service it and get it lit as well. For the moment, it’s probably as well that we didn’t light it because we would bake.

In other news, herself continues to have the time of her life in England where all her vegan food needs are met. She is off to Paris for the weekend with a friend in a couple of weeks. And then skiing in December although she may sell her skiing tickets and go to a friend’s house instead with a group from college. “In December, what will her parents say?” I said, moved to sympathy by the thought of a bunch of college students descending upon them in the run up to Christmas. “I think if we stay in the east wing, we won’t bother them,” she said. Impossible to know whether she is joking or not. It is a far cry from my own college experience where the odd weekend in Kerry was the height of excitement available. Is she doing any work? I think so. Excitingly, the last trip she has booked is home to us on December 15. Very thrilling.