My father was 91 on Friday, March 25. Unfortunately, he celebrated his birthday in a hospital bed as he has broken his hip and then picked up the winter vomiting bug in both the hospital where he got the new hip and in the hospital he went to for rehabilitation (apparently you can get it multiple times, who knew?).

I went down to Cork on the Friday to see him – it was Good Friday as well which is, despite its name, a bit of a gloomy day for a birthday for a Catholic. He was pretty well, happily, and they may let him out on April 2 if all continues well; he is a pretty robust 91 year old (not, however, as robust as a neighbour’s 91 year old mother who we regularly see at mass although not on Easter Sunday as she was off in Lanzarote with the extended family). Keep your fingers crossed for my father’s safe escape and a more cheerful birthday lunch at home.

In other Cork news, my brother has used the opportunity of my father’s illness to tidy the parents’ house. This is a bit alarming as it consists of removing the accumulated debris of ages and stacking it on the floor. I have claimed for my own 1970s Monopoly, a dusty and ancient Othello set, many children’s books and a mysterious jigsaw map showing the “New County Boundaries in the United Kingdom and Ireland”. I say mysterious because on the cover there is a handwritten price label, clearly affixed at a jumble sale, saying €2. Who on earth would have bought this after 2002 and why? And most mysteriously of all, we made it over Easter and all of the pieces were there: 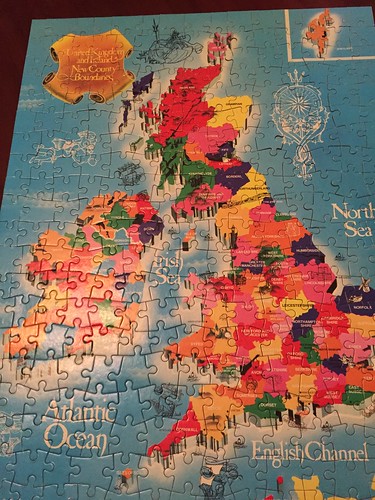