Herself has decided that she might like to go to college in the UK. I am a bit ambivalent but there we are. The process which she undertook and organised on her own was arduous and lengthy: a personal statement; predicted grades from her school; a reference from a teacher; a piece of corrected work from a teacher; an entrance exam; and two interviews. Anyway, after all that, she got offered a place on her preferred course, subject to getting excellent results in her Leaving. I told my sister. She said, “So, basically, she’s just done the equivalent of filling in her CAO form?” Sadly, yes. She’s going to apply through the CAO as well and, in the end, may stay at home, but she might go too.

Related: Herself tells me that the New York Times predicts that by 2030 two thirds of identity theft victims will be people whose parents posted too much about them on the internet. Alas.

In other exciting local news, the Council has decided after much local debate that bollards at the end of the road are to be made permanent. I cannot believe how delighted I am. My middle-aged soul rejoices.

The return to home-schooling has been a bit fraught as there were some teething problems but definitely better than last time.

Due to my extended period of leave and with Mr. Waffle at work and the children at school, I am fully up to speed on domestic admin. In what I can only call, a triumph, I managed to open new bank accounts for the boys online (their old ones are in a Cork branch and don’t come with a bank card and, at this stage, they need one and a Dublin branch). Another middle aged thrill, I can tell you.

This was my final day of leave before returning to the salt mines. It felt like the ultimate Sunday night.

I bought an antique mahogany coffee table online using my father’s Christmas cheque. I bought it online even though I know that I have to see things in the flesh before I buy them or things go very wrong. It turned up. I was not delighted. It reminds me of one of those low tables in a pub. I can see in my mind’s eye, people struggling across to it clutching pints and packets of crisps. It’s handier than what went before and it’s growing on me slightly. It looks much better in the picture than it does in real life which is why I bought it in the first place, I suppose. Mr. Waffle bought the tulips which fill my aged, wizened heart with joy. 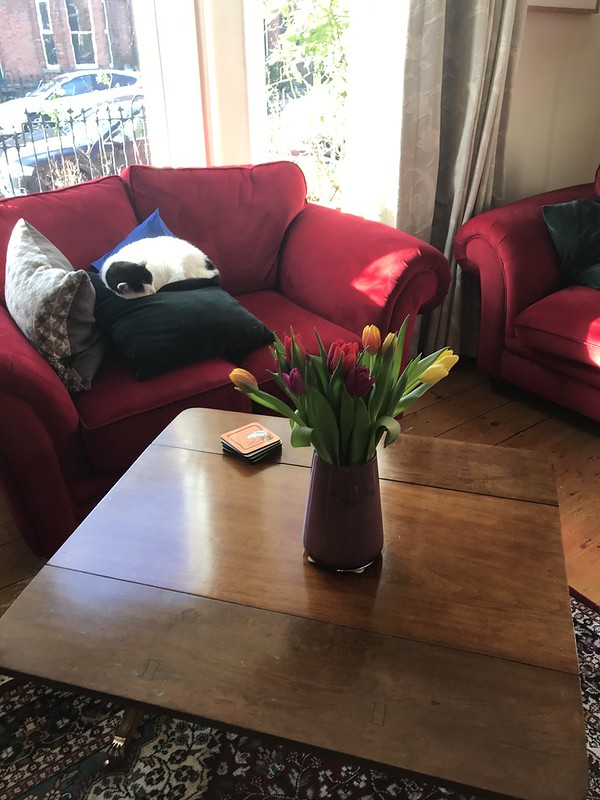 Home schooling went much better. The new app the children are using lets them see the day’s schedule for online classes and homework assigned and due dates. “We are on top of this,” I think joyfully. Like, I have to ask, why does the universe always slap you in the face when you think this?

The return to work was absolutely exhausting. I returned home drooping with fatigue. Happily, Daniel made dinner.

There appears to have been an “incident” with online schooling. Someone gave out a link and someone unpleasant turned up and shouted at a teacher. All quite nasty. The principal sent out an email saying that online classes would be suspended while they looked in to upgrading security. Sigh.

Delighted with myself that I decided to make my first week at work a short one. We had a fancy assemble at home Mexican take away for dinner. It was alright but, to be honest, not as nice as the burrito which my first born makes from time to time.

A Saturday after working part of the week is infinitely better than a Saturday on holidays. I bounded out of bed full of limitless enthusiasm and slightly exhausted everybody with my tidying and planning. And here we are, half way through January already lads.