I knew this was going to be a hellish day at work. It did not disappoint. Meanwhile despite earlier rumours that travel with the UK would reopen as early as next month it was today announced that it is hoped that the Common Travel Area between Ireland and the UK will be restored “very soon” which the Tánaiste (deputy PM) clarified means at some point this summer or autumn. This is not quite what was said earlier and again my holiday plans are… unsure.

Highlight of the day was this podcast which made me laugh out loud.

The boys had their book launch. Michael read one of his own stories and Daniel read a friend’s story. I really thought that they were both terrific. It was virtual so I was able to watch from the office over lunch. Roddy Doyle and Sheila O’Flanagan dutifully turned up for the virtual launch and I could see them smiling away as the children read out the stories. I’ve said it (several times) before but the people at Fighting Words do an amazing job.

Daniel had his TEG Irish exam and he said it was good and hard as well as slightly beset by technical difficulties.

Michael had his TEG exam – he thought it was pretty hard too. Herself continued to have a cold and I wondered should she get a Covid test especially as she had developed a slight cough. I hummed and hawed but in the end, we sent her off. She couldn’t be referred by the GP due to the ransomware attack on the health service systems so she just went to one of the walk in centres. It was speedy and efficient and she was in and out in 20 minutes. She said it wasn’t even too painful. The boys had to come home from school and I had to work from home to be on the safe side in case she did have it. Michael spent the evening wrapped in a blanket which he held up over his face (a bit like the Count in Sesame Street) any time any of us went near him in case we infected him. He wasn’t taking any chances.

Three friend from book club were scheduled to get the jab at the same time in the Aviva Stadium. Delighted buzzing of book club whatsapp group and they even arranged to meet for a (socially distanced) cup of coffee afterwards. V. thrilling or, as herself said, “You’re so old and all your friends are too.”

Herself has grown again and is now a good inch taller than me. I made Mr. Waffle stand back to back with the boys to see whether they are taller than him. They are not. “For a static data point (tallest family member), you get a lot of interest out of it,” said herself.

The Covid test came in negative within 24 hours. A pretty impressive service, I have to say. It was brilliant for herself as she was able to go into school and finish off her Leaving Cert art project which has to be done in the classroom. I let the boys stay home for the day even though we knew the result was negative by lunch time. It was lashing and I felt merciful. I worked at home for the day as well. It was alright but I’m surprised how little it suits me. Maybe in different circumstances it might work for me, I guess.

Another day of driving rain. I often say May is the nicest month of the year in Ireland. This year is proving me wrong. The children had their school sports day. Of course they did. They watched films in the classroom instead of running around in the rain and getting drenched. Unsatisfactory.

Michael and Daniel did well in annual school awards and were quite pleased with themselves. Hilariously, Michael picked up a special award for attendance. I think they were trying to acknowledge effort over zoom and online school but it was pretty ironic.

For the first time since November 2019, I got my hair cut. I am pleased. 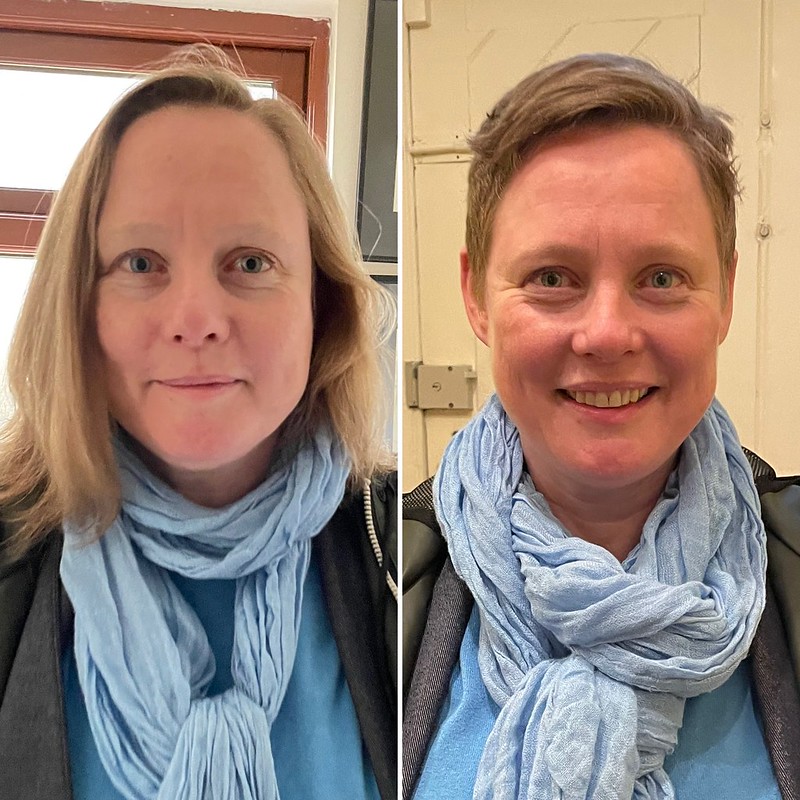 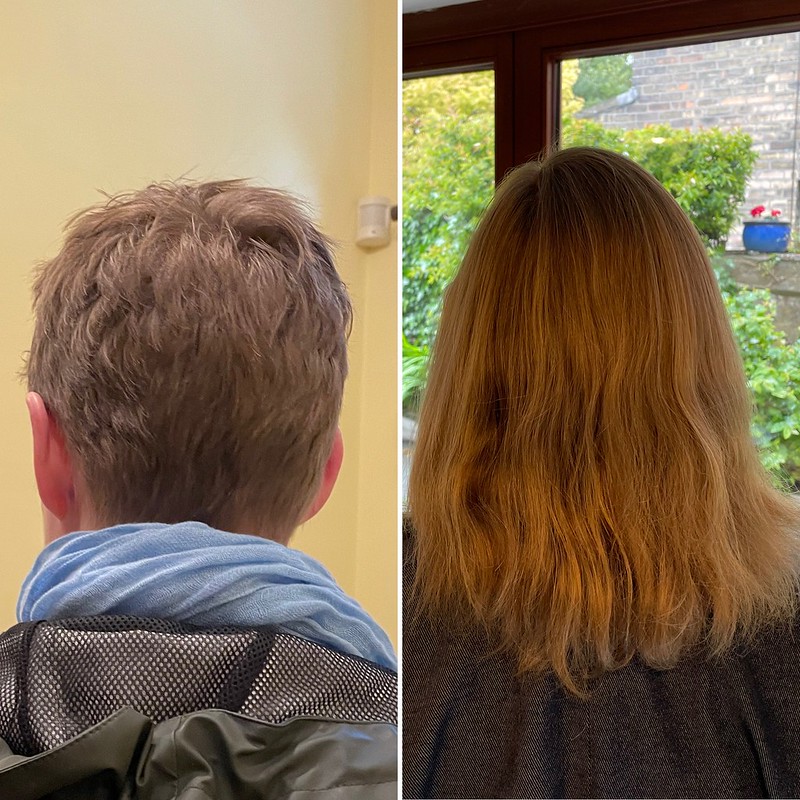 There was a certain amount of appealing bird life in evidence as we cycled along. 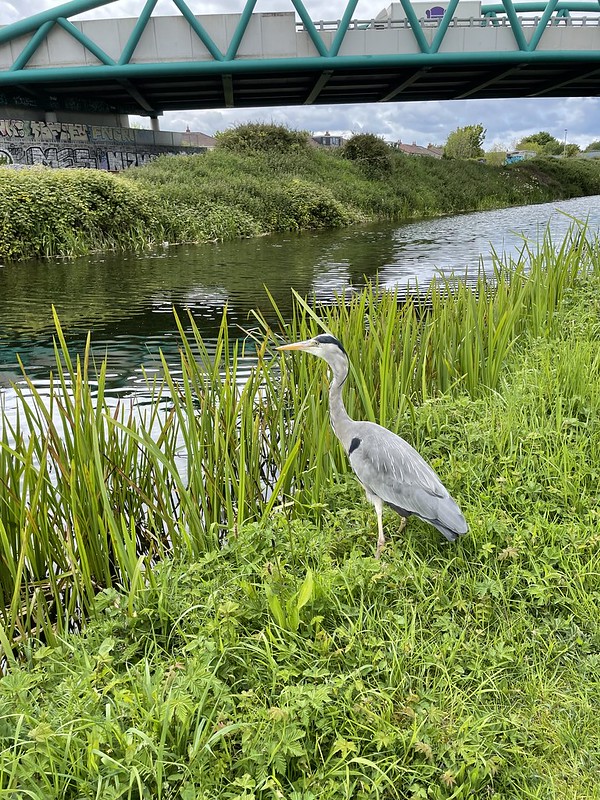 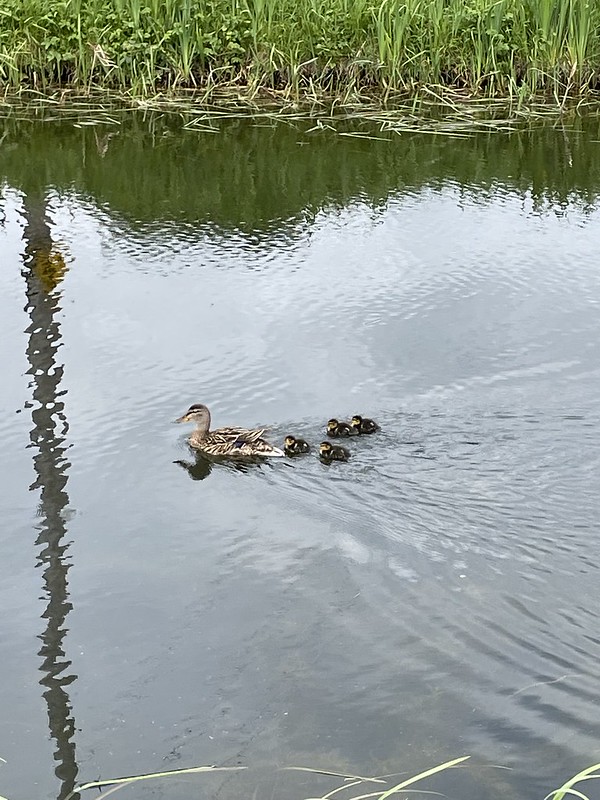 We cycled out beyond the Dublin ringroad (the inexplicably named M50, I mean, why 50?) and our route along the canal took us over the road alongside an aquaduct built to carry the canal water across the motorway.

It was quite weird because as you crossed the motorway, it looked like this. 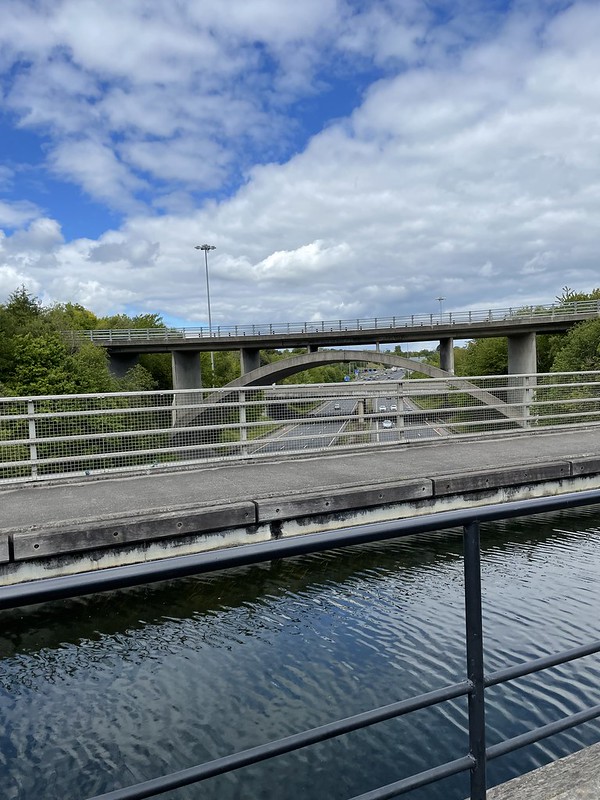 Then, beyond you went straight back to the old early 19th century stone bridges. 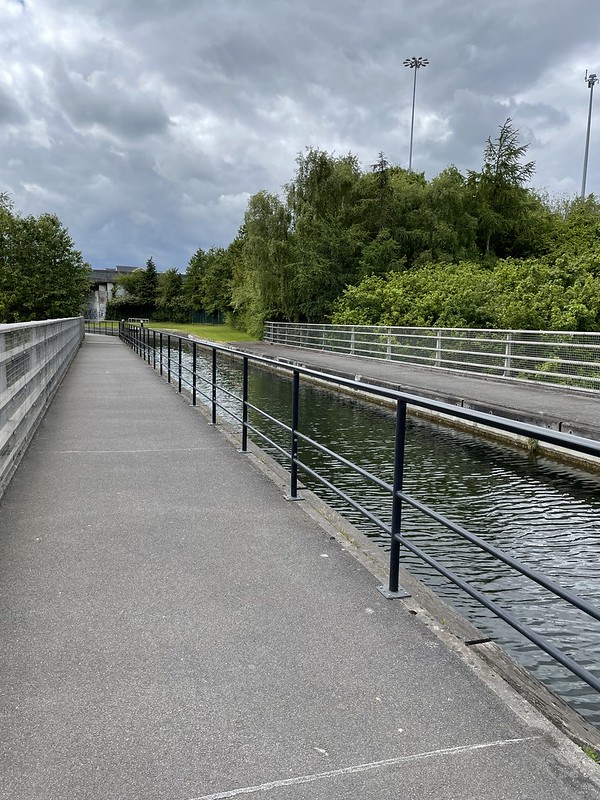 A little further on, it was like being in the middle of the countryside. 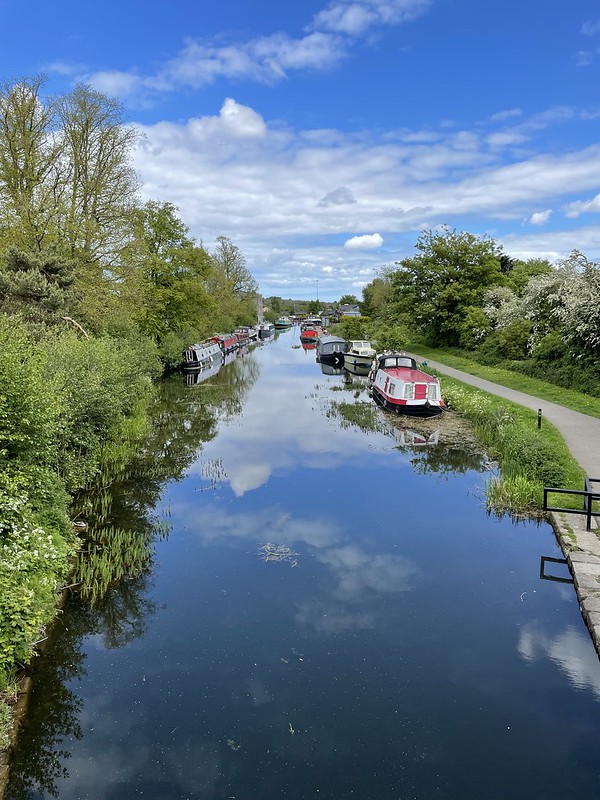 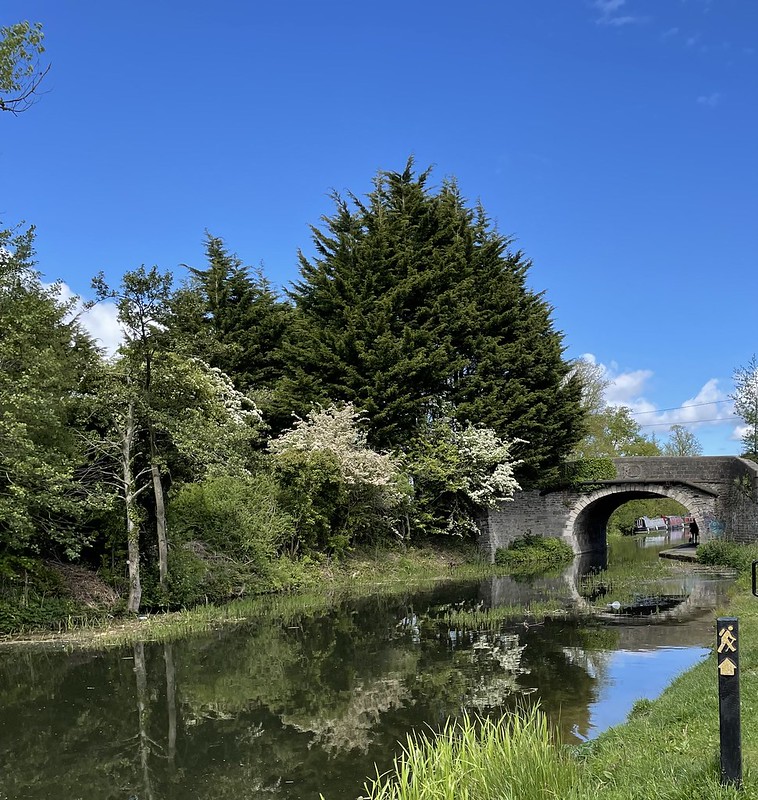 Beyond Castleknock station, is not really suitable for bikes, so we tied them up and walked along what is known as the deep sinking. It’s absolutely lovely there and feels quite wild and remote (although it is not). We went as far as Coolmine and then hopped on the commuter train (the train line runs alongside the canal which is handy) back to Castleknock (journey time, 2 minutes, not perhaps the longest walk ever). 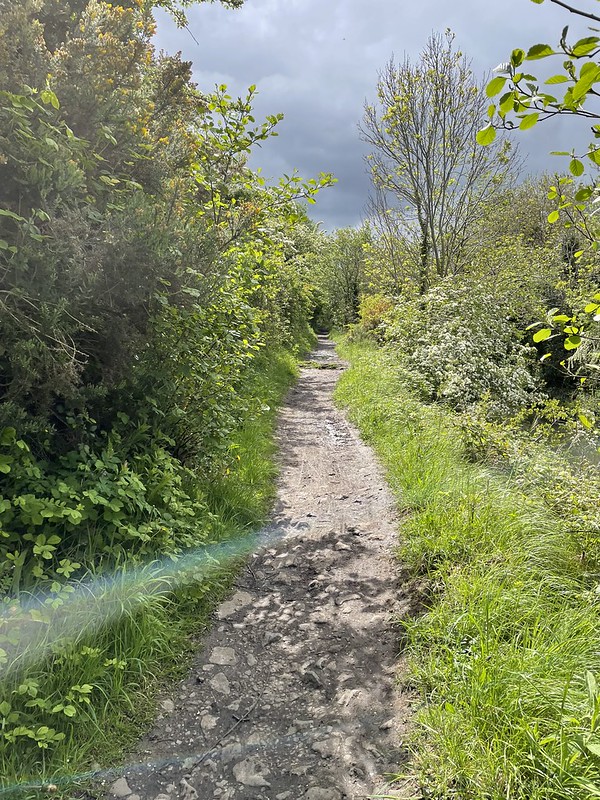 In the evening we went out to the cousins for a barbecue. We were delighted. It didn’t even rain. The children were thrilled to see their cousins and we had a lovely, lovely time. I have mentioned before that my sister-in-law is a great cook and she goes the extra mile on vegetarian options for herself which is challenging for a barbecue, frankly. Herself was delighted.

I stayed up late to watch the Eurovision voting. Even though Ireland was eliminated and also Denmark (my draw in the work sweepstakes), it was pretty entertaining.

A morning of lashing rain. Again. It cleared up in the afternoon and Mr. Waffle, the boys and I cycled to the Botanic Gardens. The laburnum was looking good and I said to the boys, “Do you think we should get laburnum for the back garden?” “Yes,” said Daniel, “I look like the kind of person with views on laburnum alright.” Sometimes I forget that gardening is a very middle aged hobby. On the other hand, look at my husband with his canal daffodil; clearly not an interest of all middle-aged people. As we wandered around, I remembered that there is this Victorian pergola covered in wisteria and I wondered whether we were too late to see at its best (spoiler alert, we were). Aloud, I said, “Let’s go and look at the wisteria pergola.” All of my menfolk looked at me and after a pause, Mr. Waffle said to the boys, “Is it perhaps a Dr. Who villain?” Oh how we laughed. Daniel and I fed the squirrels with some nuts we found nesting in the hand of the statue of Socrates (can’t say why they were deposited there or, indeed, why the only statue in the Botanic Gardens is of Socrates). Small thrills. 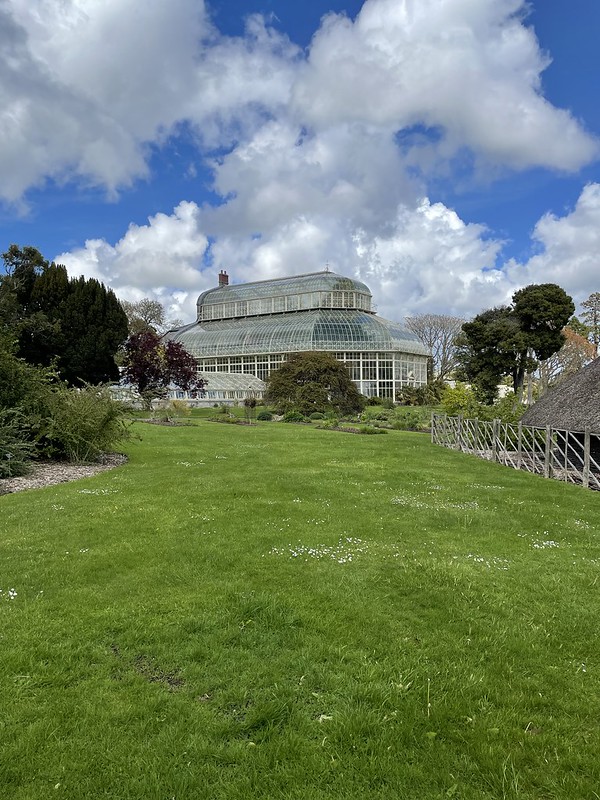 The rhododendrons in the Botanic Gardens are taunting me. Do you know how many blooms my pink rhododendron produced? Two, that’s how many. Do you know it’s an invasive species here and the parks and wildlife people are desperately trying to get rid of it in our national parks? I feel I could help. Often, I only have to look at a plant for it to wither. 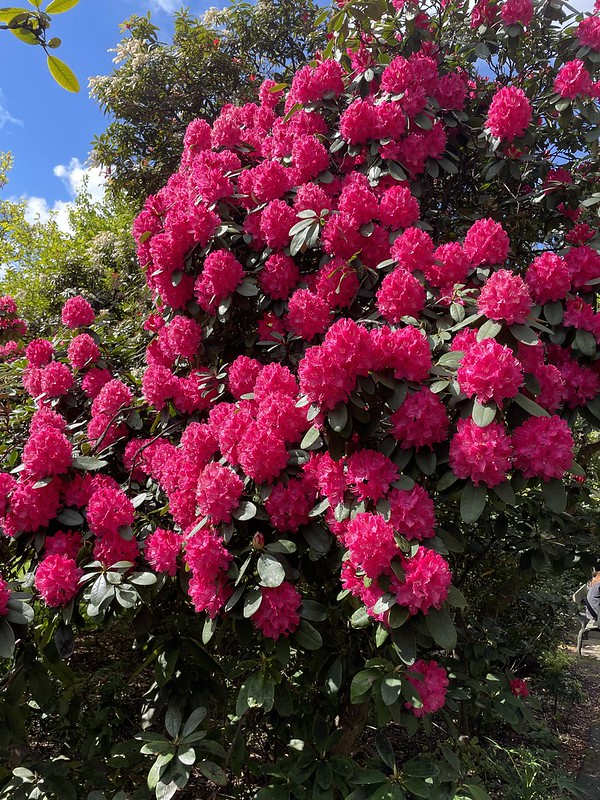 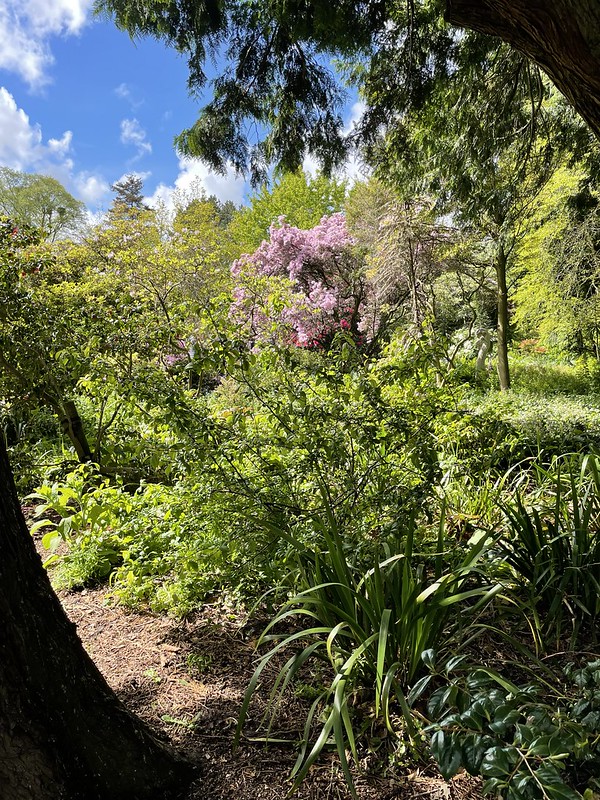 Still no vaccine appointment. Tell me, have you any news?