Herself expressed an interest in playing tennis and the three children trotted out together. They seem to have had a reasonable time. I was delighted as an ongoing source of guilt this summer is how little I have organised for them, particularly the boys.

Herself was able to register for her vaccine. It seems to be moving along very speedily now.

Michael and I dined alone as Daniel and his father were at a GAA match and herself was out cycling.

Herself went for a cycle in the park with her (male) friend and she was exhausted when she got home having cycled at speed for hours. Her friend was trying to slow down but compared to her female friends and her mother, he was pretty speedy. Good for her, doubtless.

The boys headed off to their aunt and uncle in Cork again and I was thrilled as I felt that it would give them a change of scene and the weather was terrific. 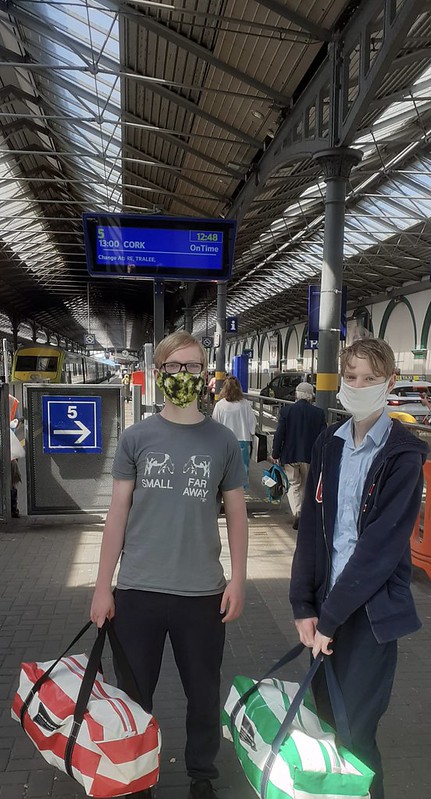 We moved the kitchen table outside. Satisfactory. The tablecloth is one I brought up from Cork. I remember buying it with my mother in Venice in the 1980s. It hasn’t seen much action since then as it’s a bit small for larger groups. It could do with an iron as well but it was too hot to contemplate approaching an iron. 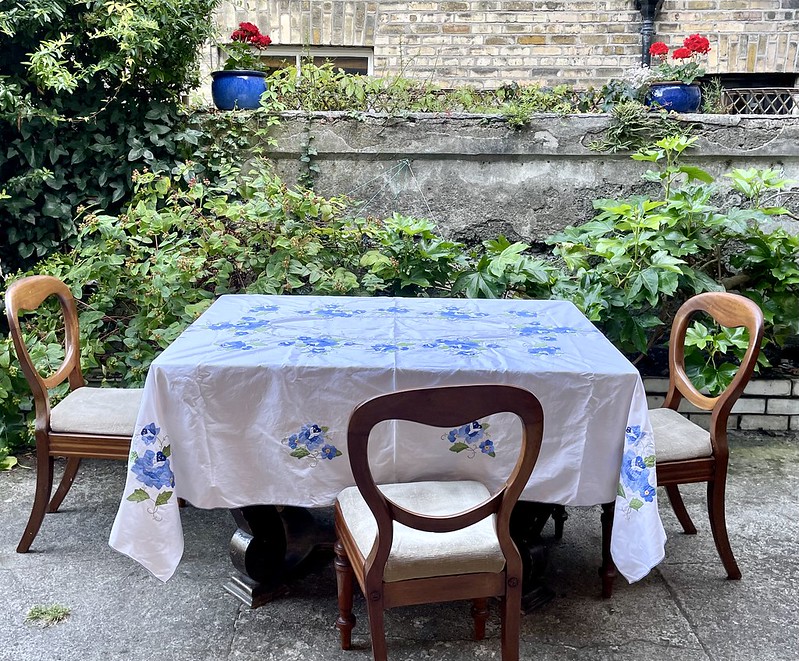 The boys made it to Cork safely.

The boys went to west Cork with their aunt and tried out the Dursey island cable car. The consensus was that it was not as exciting as it looks. They had glorious weather for it though.

Meanwhile, in Dublin, we baked in the heat. Jam season continued. From farm (i.e. front garden): 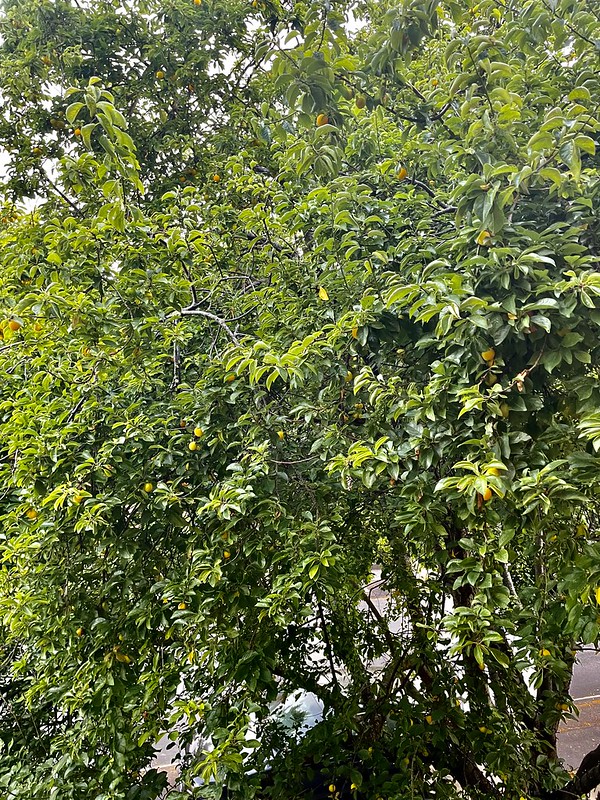 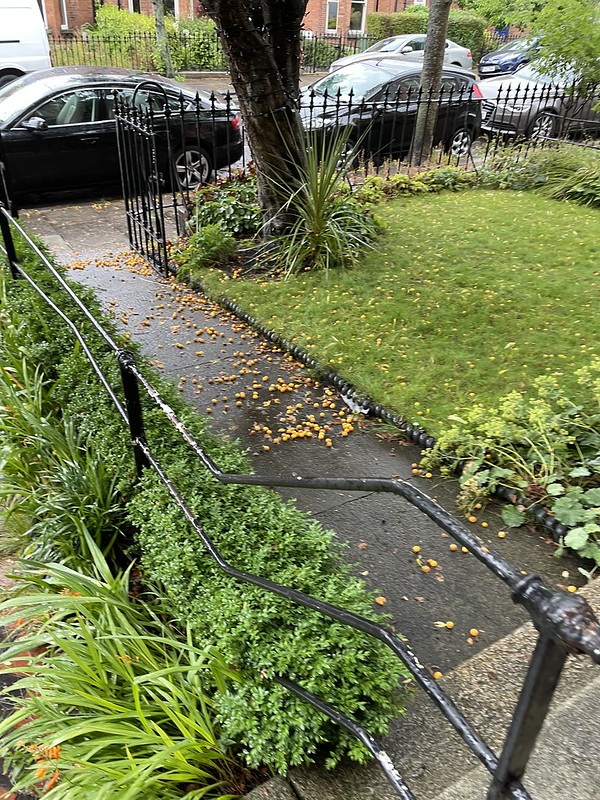 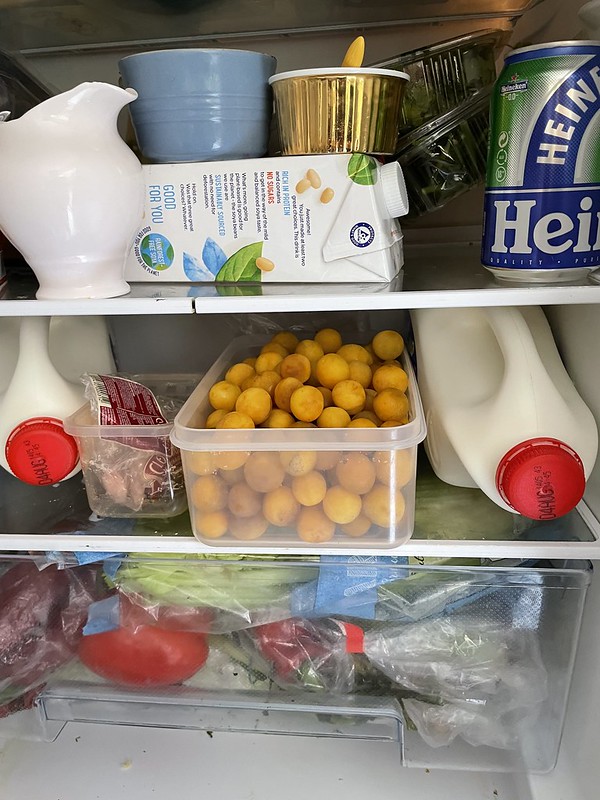 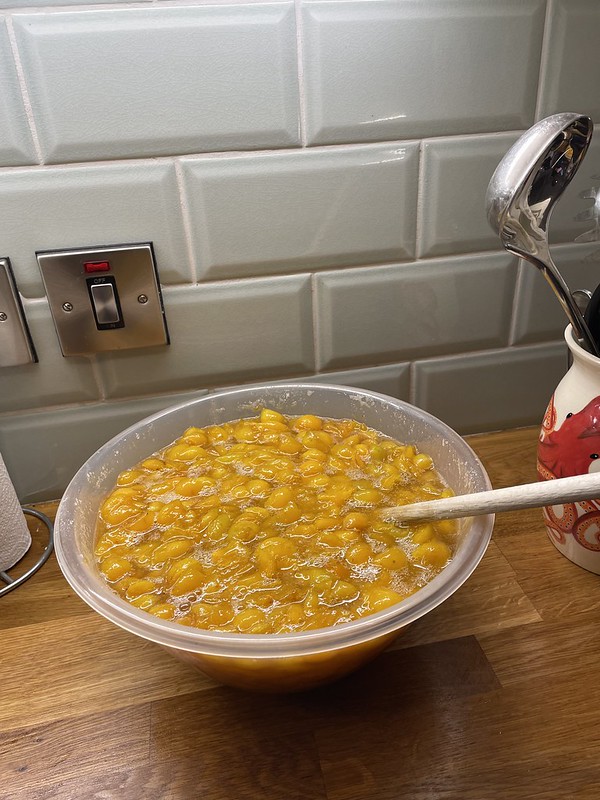 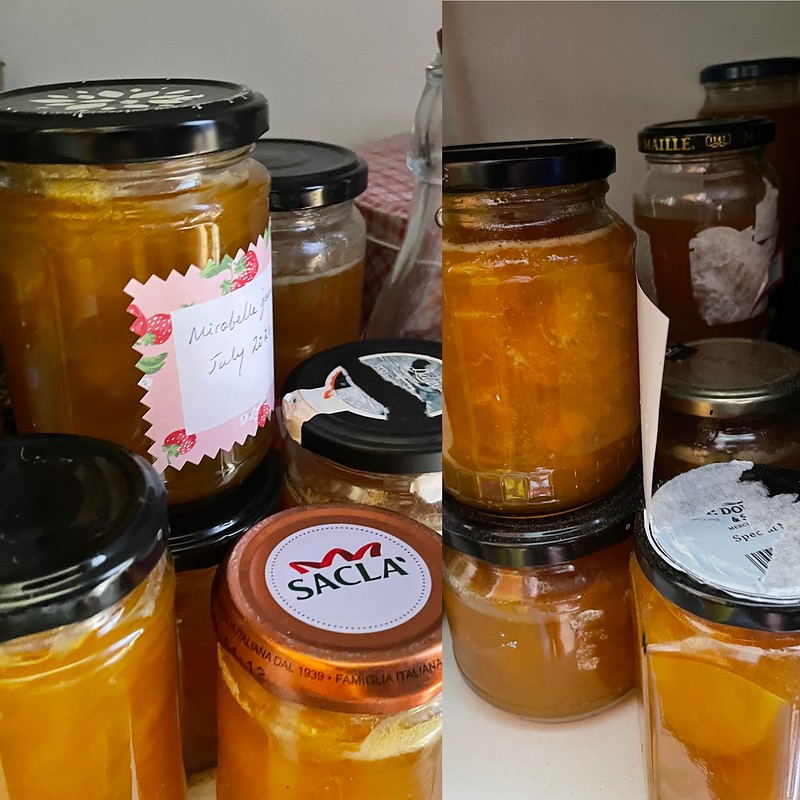 In anticipation of the (much deferred) arrival of the plumbers on Monday, Mr. Waffle decamped from the utility room where he has been based since March of last year and took the last of his stuff back to the office. The end of an era.

Herself got her vaccine appointment for the next week (imagine) and we went out for an outdoor lunch together. Still very warm.

The boys were off in a hotel in Bantry with their aunt enjoying the luxury of indoor dining.

My lily has outdone itself this year. It needed a bit of extra support so I took a length of bamboo from the forest at the end of the neighbours’ garden adjoining ours. Theft or thinning of bamboo that’s probably good for it? My family have one view, I have another. Your thoughts would be welcome provided they chime with mine. 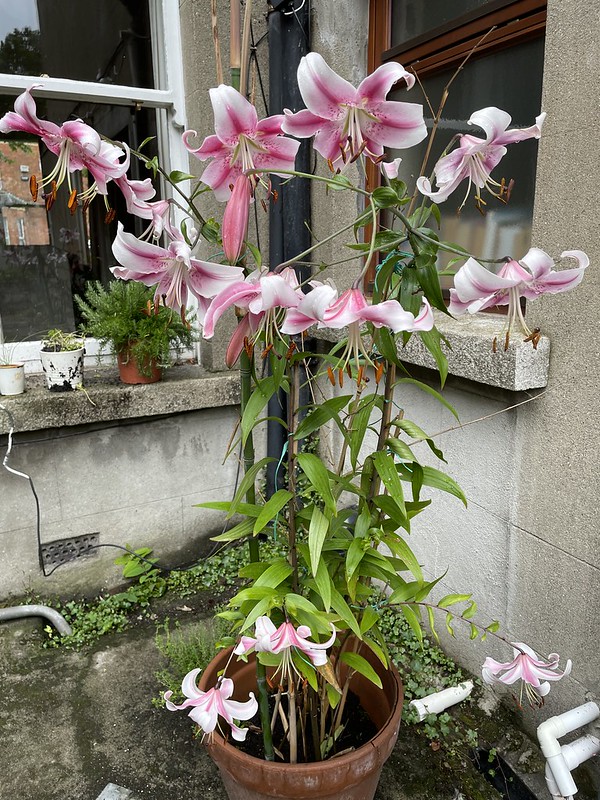 Mr. Waffle and I went out for breakfast to a local cafe for the first time in ages. We got more fun from this bag than you might expect. What order are the languages listed in? The only clue I will give you is that a bureaucratic mind was involved in this process. Answer below.* 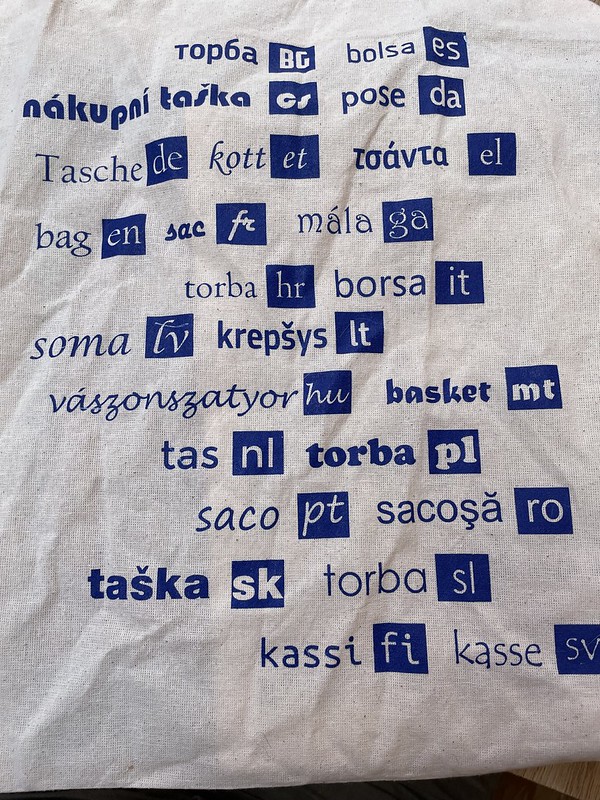 We got a call from herself who had declined to come with us. “There’s someone in the house,” she whispered into the phone. “There isn’t, I’m sure,” said Mr. Waffle, “if there were, the cat would be going crazy.” “She is going crazy,” hissed herself. I zoomed home. There was not, in fact someone in the house. We’d left the back door open and the noise of the window cleaner working next door had floated upstairs and unnerved her (he came and did our windows next which was handy). The cat was indeed going crazy because she had managed to get herself in through a tiny hole in the cupboard under the stairs and couldn’t get back out again. What attracted her there? More mice or worse? Or just general perverseness? Mr. Waffle had to unscrew a wooden panel to let her out again. Idiot cat.

I went into town and bought a variety of exciting homewares. Even though I really shouldn’t. I mean, where is all the stuff from my parents’ house going to go?

Mr Waffle and I took the Dart out to Booterstown. A young man on the platform was telling all his friends how he had recovered from Covid. He ate a raw onion the other night and couldn’t taste anything. It seems, at best, unfortunate but he was delighted with himself. 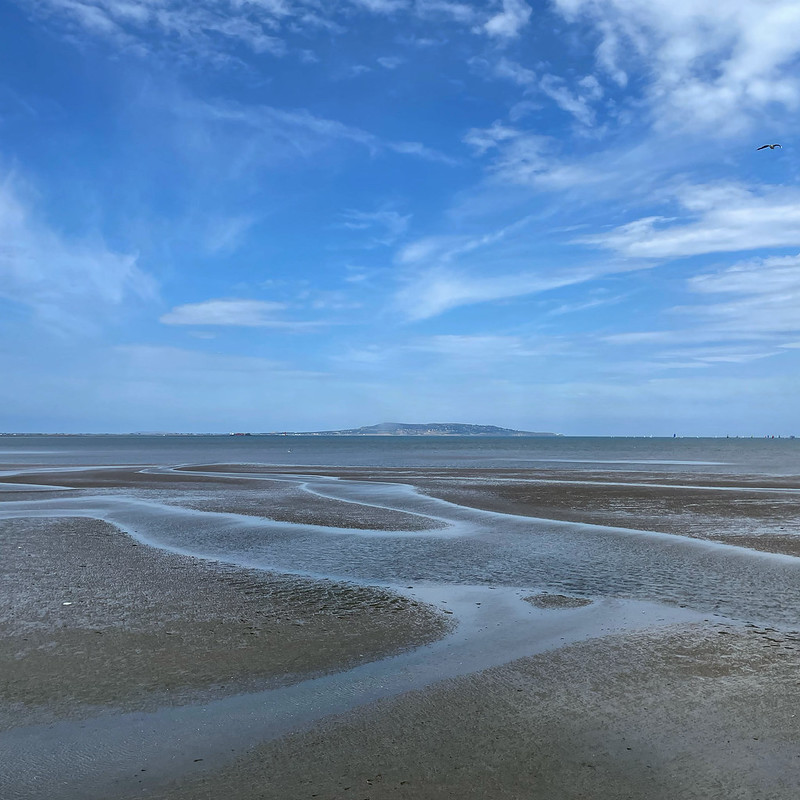 We visited Mr. Waffle’s mother and then cycled on to Dalkey which was short of tea shops but we managed (middle aged problems if ever I saw them). I thought Bullock Harbour might work for a swim but it was more for jumping in and I wasn’t in a jumping in kind of mood so we went to Sandycove. The water was lovely but it was crowded. A young man was on a paddle board with a very small baby who was howling the place down. I offered to assist but he said her mother was coming. She was. Tense times in that relationship though as the baby howled the place down and the mother picked her way out among the sharp stones. Lads, I do not miss the challenges of minding small children. 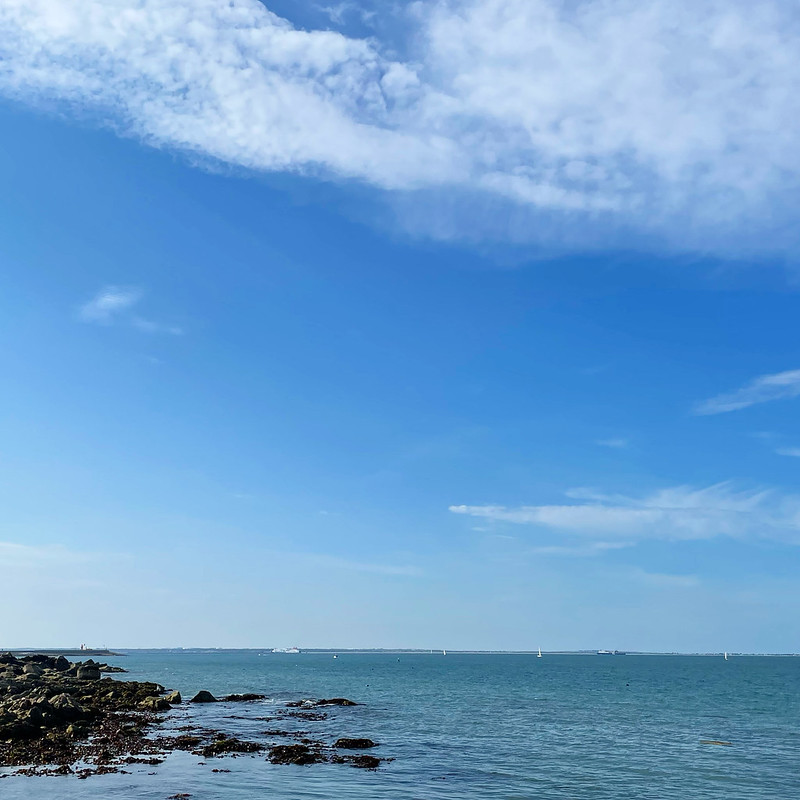 While Mr. Waffle and I were out disporting ourselves, herself continued to work on her summer translation job – she’s translating something for a friend of Mr. Waffle’s and is near the end and the payout of filthy lucre – and the boys were off on Bere Island. My sister’s partner’s parents have a house there and they kindly invited the boys. It was so warm even Michael swam.

This is the anniversary of my lovely Nana’s death. At mass the priest told us it was grandparents’ day. Who knew? I said a prayer for her although I doubt she needed it having been very saintly. I often think how strange it was that she would have worn long Edwardian skirts (she was born in 1897). I mean I know this seems an odd thing to obsess about but I just wonder what it was like to wear those clothes, they seem so remote from us now. She died in 1984 when I was 15 and I never really asked her about when she was young or the characters from the War of Independence (about whom she had views I understand from my mother – my grandmother got a medal and an army pension but I think she was always a bit ambivalent about some of the activities, she took the pension but applied it to charitable causes). I was an age, when she died, when she was a beloved character in my story but, for me, without any back story of her own. I tried to avoid something similar happening with my children and their Cork grandfather but this led to baffling sessions where I forced my unwilling children to ask my father questions about his youth and he said, “I don’t remember” and returned promptly to his newspaper. Perhaps these interests only come with age.

In the afternoon I took myself off alone to go for a swim as herself was still translating and Mr. Waffle didn’t fancy it. I left my phone behind in case it was nicked. Things I use my phone for as well as, obviously, phoning and texting: taking photos; listening to podcasts; internet browsing including checking the Dart timetable; telling the time (my watch is in for rather expensive repairs); navigating (google maps); paying for stuff (Apple pay, everyone has digital payments now, even the man selling ice cream from a van at the beach). I was surprised at how unnerved I was heading out without it. I mean I only got a smart phone for the first time in 2011, I have lived 80% of my life without one. I felt a bit of an idiot for being so dependent. You will be delighted to hear that I managed to get myself out for the afternoon without my phone and inspected the newly pedestrianised streets of Dun Laoghaire (grand, good even) and have a swim in Seapoint (heaving) and cycle without getting lost. No photos though.

Poor Mr. Waffle had a work call at 9 in the evening. But otherwise the evening was uneventful as we prepared ourselves mentally for our last week at work before the holidays and the arrival of the plumber and his accolytes at 7.30 in the morning. They were to begin the much deferred bathroom revamp (deferred from last October but in a very real way deferred from 2013 when we moved in and couldn’t afford to do it up – we’ve been living with the previous owners tiles for a long time). I feel a whole new post will be required to cover the bathroom excitement. Hold on to your hats out there.

*It’s alphabetical by language in the language. So Spanish is ES – looks out of order right? ES is the ISO code for Spanish but, obviously, Castellano is the Spanish for Spanish so it appears not after Danish as you would expect but after Bulgarian. The same is true for Finnish which reflects in its position the fact that Suomi is the Finnish for Finnish. Hours of harmless entertainment for all the family. I’m not sure I can stop at any time any more which is its own concern to be honest.