We have just had a sofa delivered. The best dressed diplomat and her husband are leaving Brussels and we bought their sofa (though we took most of their other stuff – the beanbag, the mobile phone, the wine, the champagne etc.). It arrived today. We had asked for an outside lift. The movers when they arrived had no lift. They said they would carry it up the stairs. They did. They got grease from the lift on the arms and back. Which is exactly what happened to our last sofa when our movers brought it up the stairs. Which is why it was rejected by the Salvation Army and now sits alone and dejected in our garage. The movers say that this was my fault because I didn’t tell them about the lift (and ok I feel a bit stupid) but I was upstairs when they brought it up and I assumed that because they are professionals (unlike the chancers who moved our stuff) they would have wrapped the sofa. I should have checked. Bitter, bitter, bitter. The best dressed diplomat and husband are gutted (because they are very nice souls) and arrived round this evening with flowers, strawberries and promises to claim on their insurance.Is this not very annoying? 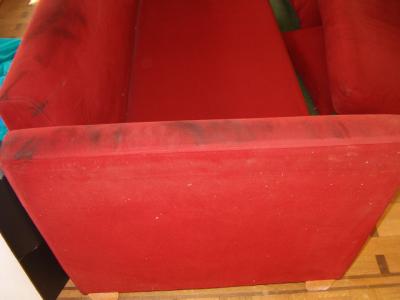 And here, for good measure, is our last sofa:

Have you seen my pics? They only reinforce the ghastliness of matters…

Nice lamp. Are throws fashionable in Belgium at all?

I think they’re certainly going to be, silver.

Hmm. Thanks people. I already have a throw but I wanted to give it to the Salvation Army but it looks like I may need to hang on to it a little longer..

Bad luck – I witnessed our movers bodging a rectangular wardrobe through a doorway – widthways! Took three of them but they managed it in the end.