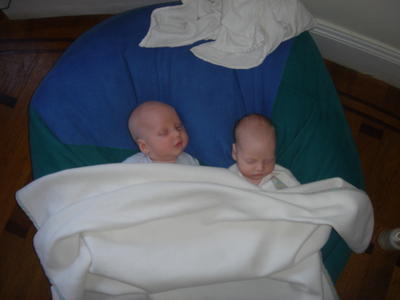 Got an email from my father-in-law beginning as follows:

“[A]s I sipped my espresso macchiato this morning (as an aside, this was the place in Smithfield where I asked a new member of staff for an espresso, to be told “Sorry-don’t understand English)….”

It’s far from espresso macchiatos he was reared; this celtic tiger stuff is getting out of control.

I rather like the juxtaposition of the standard signature and the content of this email from a friend and fellow Georgette Heyer fan:

GH [Georgette Heyer I’m reading] is Sylvester – lots of fun, although I think I could write them myself at this stage – the
signposts are pretty clear!

Got an email from my sister as follows:

“I know one shouldn’t laugh at names, but Kermit!!!

I am pleased to announce that Kermit S has accepted the position of Productivity Operations Leader, and will assume his new role effective Monday, November 21, 2005.

Kermit, has an extensive 25 year manufacturing/production background and a proven record of creating and maintaining high performance work teams. Kermit will be responsible for leading the overall process improvement efforts. X will report directly to Kermit, as will Y.

Please join me, in welcoming Kermit, his wife and his 2 children to the [insert company name here] Family.”

Showed this to Mr. Waffle but he refused to be amused. “It must have been a name before it was assigned to a frog.”   “Oh yeah, there are so many famous Kermits in history, Kermit of Arc, Pope Kermit, Kermit Roosevelt…” But he remains adamant and unamused, think it’s kind of a funny name myself.

Ventured out yesterday and today.

Yesterday my path out was barred by a pigeon sitting in the hall looking at me nastily. It was quite scary. I shouted shoo at it in an entirely ineffectual way and it looked at me in distinct scorn.  I edged past it to the door and when I got there found it was bucketing rain and I had no umbrella so went back upstairs with Daniel attached to me in the sling and
left Michael in the hall in the buggy.  On the way up I began to worry that the pigeon might attack Michael (stop sniggering, it was very malignant) so ran all the way back down to find him safe although the pigeon looked like he was reckoning whether Michael might be edible.  When I finally secured my umbrella, I pointed it at the pigeon and opened and closed it
vigourously.  If pigeons could laugh, I think that he would have. Malevolently. He certainly didn’t move and the three of us edged past very cautiously.

All of this going out is good preparation for next week
when we will be home alone as Mr. Waffle is off on a work trip.  The boys and I will have to drive the Princess to the creche and pick her up (the alternative is worse).  I am nervous, people.

I’m with you on the Kermit – can you imagine having to go on a date with someone called Kermit? I mean, you wouldn’t would you? How could you possibly be romantic with Kermit? No. Mr Waffle speaks false – tell him from me.

Poor Kermit. But silly Kermit – you’d have to change your name, wouldn’t you?

I met a guy named Kermit once, years ago. I couldn’t keep a straight face. He gave me the eyeball of death and walked away. Poor guy. I bet he’s changed his name by now.

Mmm I worked with some wonderfully named people at a German investment bank. Thermos Kartalis was delightful.

because i’m all about research:
Kermit
Gender: Boy
Origin: Irish, Gaelic
Meaning: “Without envy.”
Notes: Variant of Dermot, made famous by the popular green Muppet Kermit the Frog.
Keywords: gaelic, irish, famous, popular, green
Popularity: The name Kermit ranked 588 out of 1219 (Top 48%) as a first name for males of all ages in the 1990 U.S. Census. The name Kermit was not ranked among 88799 surnames for males and females of all ages in the 1990 U.S. Census.
“Without envy,” indeed. *snort*

I’m assuming you KNOW there really was a Kermit Roosevelt (he was Theodore’s (eldest, I think) son), and you slipped that in there to be tricky right? Good one! (p.s. I only know this random fact because I heard a review on National Public Radio (in the US) about a book written about the journey through the Amazon rainforest Kermit and his father took after TR’s second run for presidential office.)

Or this guy: http://www.law.csuohio.edu/faculty/lind/
Would that be Carluccios? ON the pavement?

SSC, alas, it would appear that the pigeon is boss.
Norah, ta.
Heather, Pog, Bobble, yes, yes, interesting.
The rest of you: you know far, far too much about Kermits. I am, however, delighted to discover that it means ” without envy”.

What lovely boys. At the moment our own little darling has been complaining about life, the universe and everything for the last three hours and to me they look like peaceful, silent little angels in comparison.