Did you know that twins suck each other’s thumbs? Or noses, or shoulders, or whatever happens to be in range.  They weigh nearly12 kilos between them now. That’s a lot of baby to be hefting round.

They are developing personalities. Daniel is a big baby with an amiable grin and relaxed manner who reminds me forcibly of his uncle (my feckless brother – I foresee a lifetime of getting extra keys cut). He looks very like his big sister and moves like she did at his age (why should I hold my head up? No, really, why?  I don’t intend to crawl until I reach 11 months).

Michael is a very different child. Unlike the Princess and Daniel,he is not a bald baby (how extraordinary). He loves having his legs bicycled and already puts weight on his legs,an ominous sign that he may walk early. Where did we get an athletic baby from? Unlike his older and bigger brother he believes that sleep is for wimps but he is a lot more amiable on his four hours a night than I suspect Margaret Thatcher ever was.   I, however, am finding the regime challenging and, of course, the Princess likes to add her mite. I am sure you can imagine the joy in the Waffle household when after a night awake with the boys, the Princess knocked on our bedroom door at 6.02 this morning. 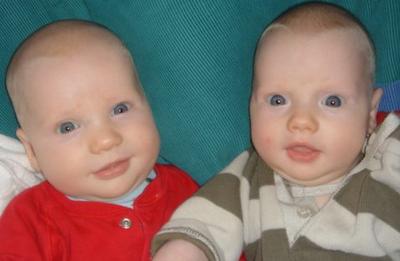 look at those contented visages! what happy boys they seem.

Sez, Jojo is right as ever. Kristin, Berry, thank you.