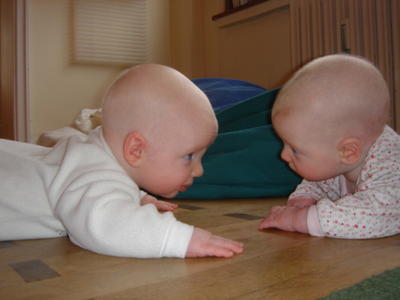 Minkleberry
on 06 February 2006 at 18:44
ooooh lovely!
kristin
Homepage)
on 07 February 2006 at 00:08
look at those strong necks! tummy time does its job!! what lovely boys.
cha0tic
on 08 February 2006 at 01:13
ERK! They look like they’re communicating using psychic powers. Are you sure you remember the conception? It wasn’t in a place called Midwich was it 🙂

daddyslittledemon
on 08 February 2006 at 13:12
Madame la Gaufre
any tips or advice on persuading my baby daughter to sleep? My own inclination is towards chloroform, but my wife has expressed misgivings.
thanks in advance

belgianwaffle
on 15 February 2006 at 12:50
Ahh thank you all very much. Except for the Midwich cuckoos. Humph. DLD, not a hope, Princess didn’t sleep till she was two. Roll with the chloroform.