We left Kerry behind us and drove to Cork. Mr. Waffle, alas, had to return to Dublin so it was just the four of us. We were in Cork by lunchtime where, for consistency, it was lashing. My brother took the children into the library for the afternoon. New books, new rain; it was all excitement.

At mass, we had my favourite priest. He is now Michael’s favourite priest too. He is reverent, he doesn’t rush matters, he gives a good sermon and that Sunday, notwithstanding the fact that there was a choir, mass was finished 28 minutes after it started.

I remain convinced that the health of the Catholic church in an area is inversely proportionate to the length of Sunday mass. This explains why, for example, in Godless Dublin our mass is always nearly an hour.

In the afternoon we went to Fitzgerald’s park to go to the playground. For their own inscrutable reasons the city fathers have chosen to do up the playground in July. So, it was closed. 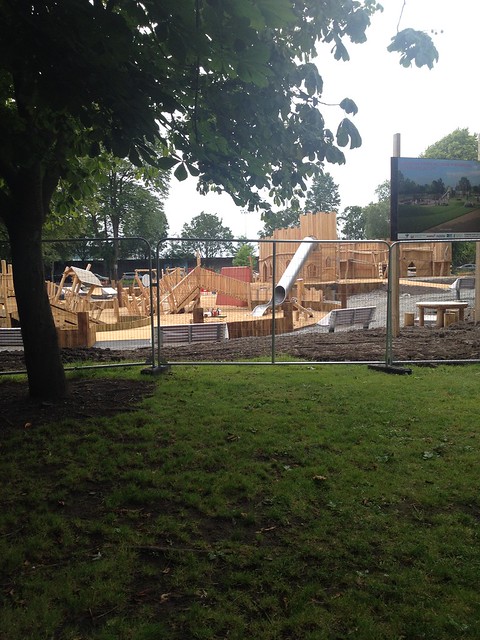 I am sure it will be terrific when it re-opens but, you know, sub-optimal for the moment. In the absence of the playground we went to the city museum. A poor substitute. It’s a good little museum with lots of interesting (if occasionally slightly random) exhibits but the troops were not in the mood for it. 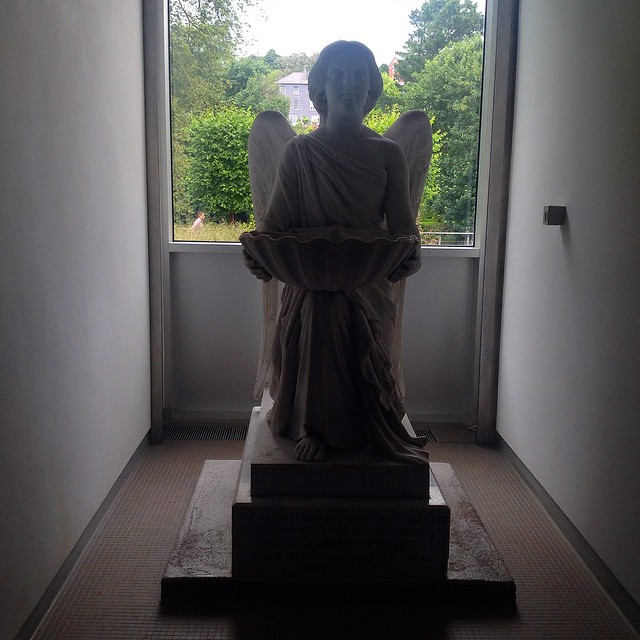 Even the recreation of the WW1 trenches failed to spark their interest.

So we went to find the ice cream van and bounce on what is known as the Shaky Bridge (officially Daly’s bridge). Even this failed to cheer the troops. Daniel who doesn’t like ice cream (I know!) was particularly uncheered. 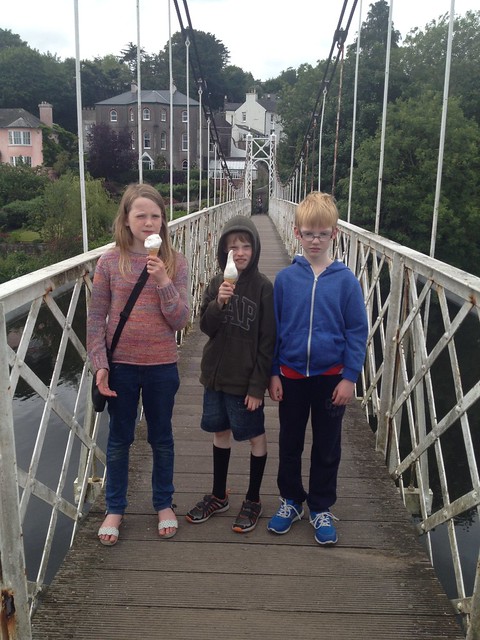 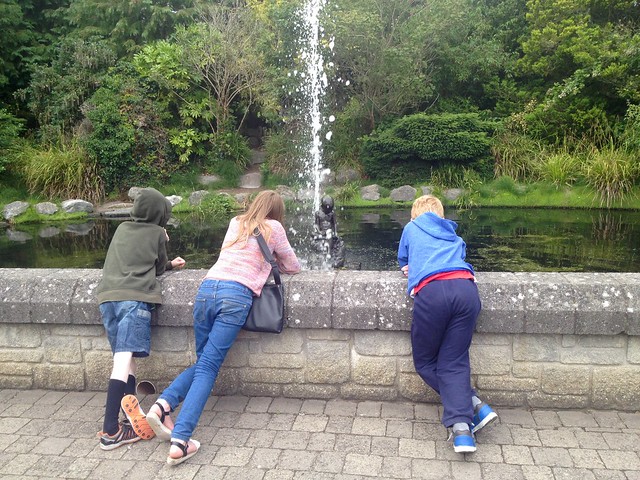 All that was left for us to do was return to my parents’ house and play with electronic devices with a vengeance.

Determined to make up for the previous day’s lack of success, I took the children to Milano’s for lunch. Joy was unconfined. As ever, I decided to push my luck afterwards and take them on the UCC George Boole tour. It’s mostly a UCC tour. And though the guide was knowledgeable and friendly, and there were a couple of costumed characters, it was pitched just wrong for us. For me, with an intimate knowledge of UCC, there was very little I didn’t know already and quite a lot I could have added; for the children, it was too much and too boring and too long. I could see that the tourists were entranced but it just didn’t work for us. For me the highlight was getting into the observatory where I had never been before; for the children, it was the costumed characters but, by the end, I think that all of the goodwill generated by the pizza was exhausted. 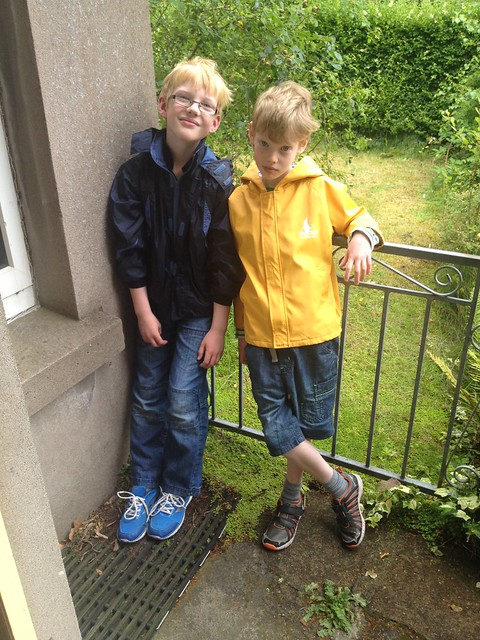 Michael did not feel well so, leaving him to the tender mercies of his grandfather, his brother and sister and I walked into the market to buy materials for lunch and ingredients for a cake for my aunt. My aunt, who lives next door to my parents, turned 86 on June 21 and after much logistical discussion we were having a birthday dinner for her that night. Herself had undertaken to make a marble cake for the event.

On the way back, I pointed out to the children a historical plaque on one of the houses (my poor children, how they suffer). It said “Professor Simpson who first synthesised succinic acid lived here”. “I wonder,” said herself, “did he have a lisp.” Perhaps you had to be there, but it was the funniest thing I heard all week.

In the afternoon, herself went next door to visit my aunt and came back with an emergency change of plan. Apparently, my aunt doesn’t like marble cake; resourceful child, she made lemon cake instead. Dinner itself passed off very well with only some slight difficulties as follows: 1. My brother, sister and I having concocted this between us, forgot to tell the birthday girl until the last moment, she was able to come all the same; 2. Having accidentally omitted to tell my father, he was convinced that it was a Bastille day celebration (he always celebrates July 14 being a Francophile and a republican – non-violent branch) and, as he is a little hard of hearing, it needed several stage whispers before he understood that it was a belated birthday dinner for his sister and he returned wistfully to the Bastille theme several times over dinner.

I seized the day. The weather forecast said it was to be sunny and by mid-morning we were in Kinsale on our usual forced march to Charles Fort. It was really lovely, even the children seemed to enjoy it. It made a great change from the rain. 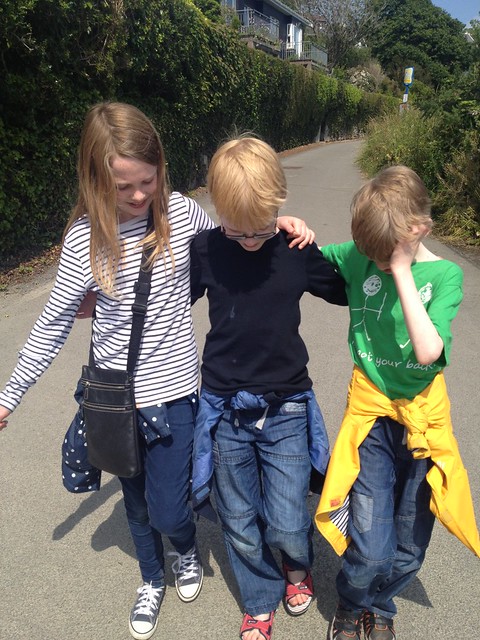 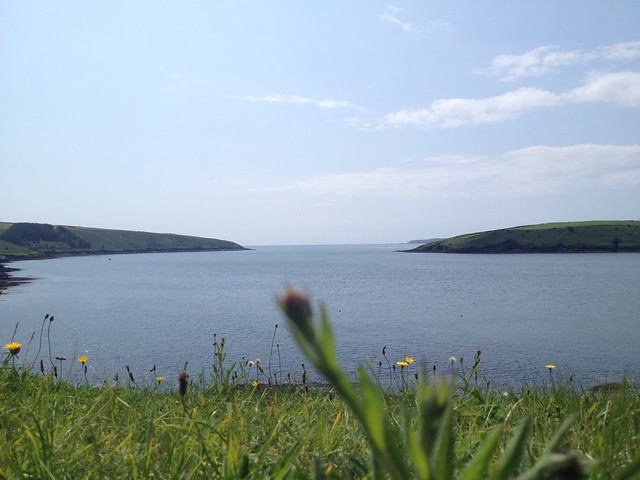 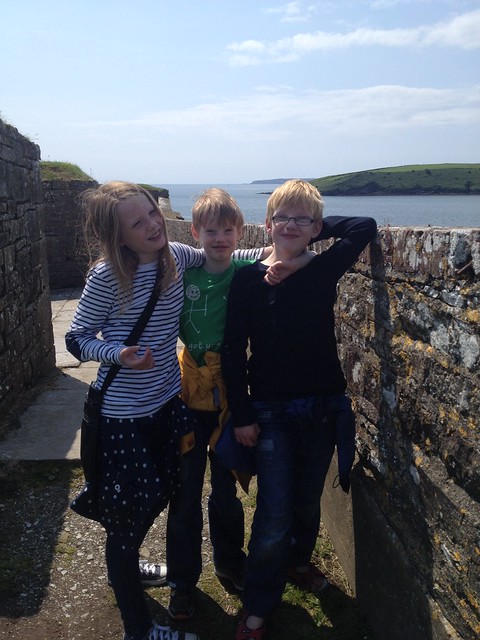 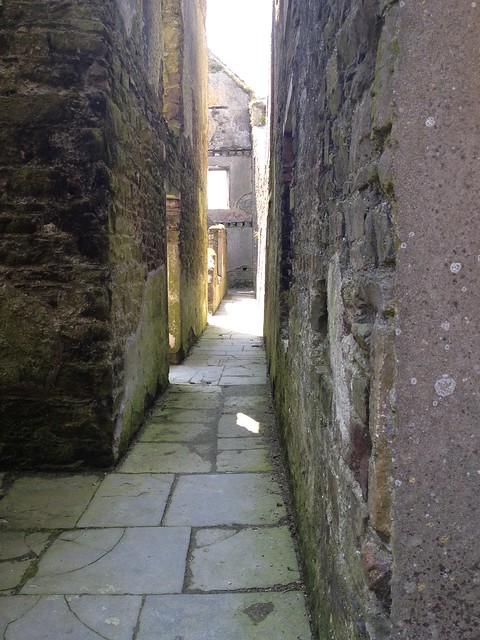 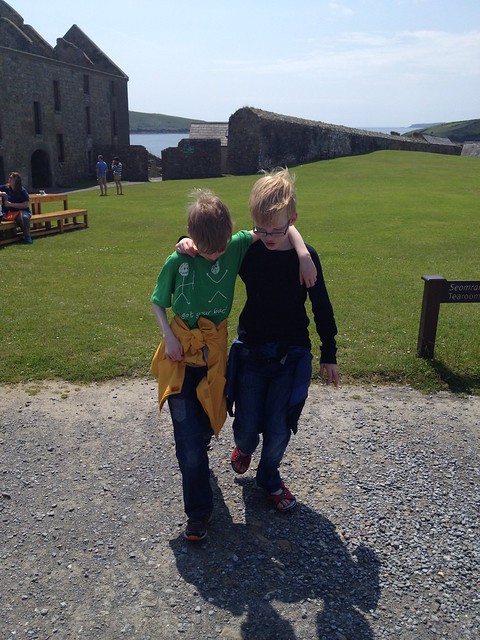 As we walked back to Summercove to have lunch in the Bulman, I got to make the standard remark which is nonetheless true, “Ireland is the best country in the world for holidays when the weather is fine.” 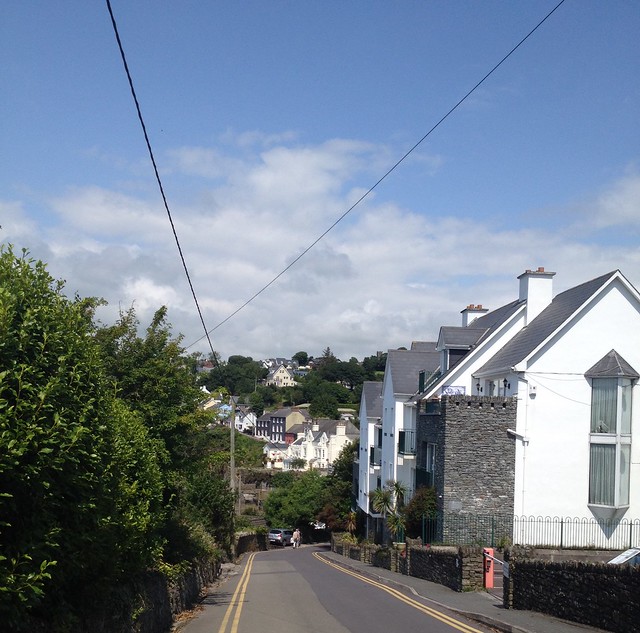 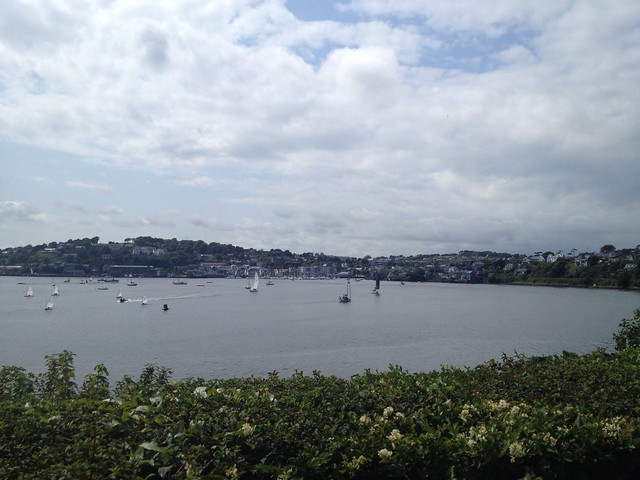 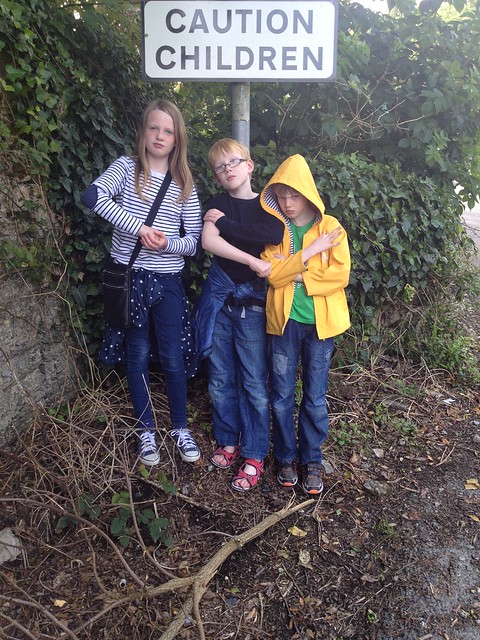 When, we got back to the car, it was still sunny. On the spur of the moment, I decided to go to Garretstown beach. If there is a problem with Cork (which is, of course, denied) it’s that you have to drive out of the city for a good hour to get to a nice beach. It was sunny, we were already in Kinsale, the beach was nearby, we were fed and the beach gear, by happy coincidence, was in the car, so off we went. It was magic. The sun shone, the sea was warm (compared to Kerry, not compared to the Mediterranean), there were waves but not too high. We all loved it and came back to Cork sandy and happy. 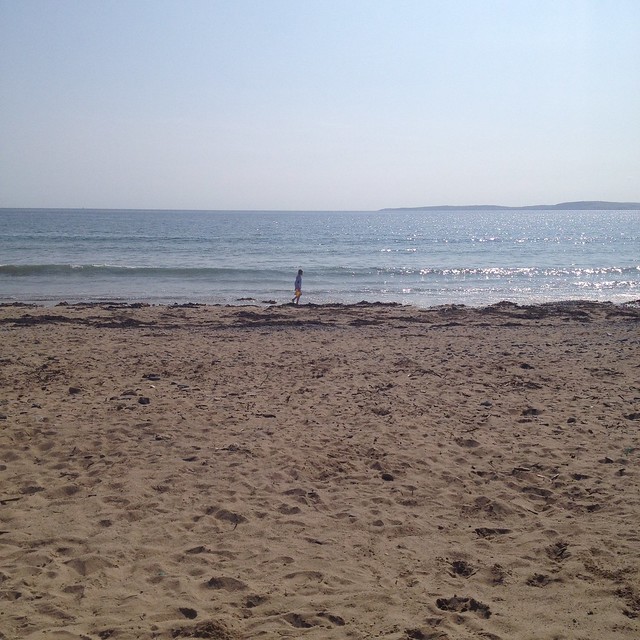 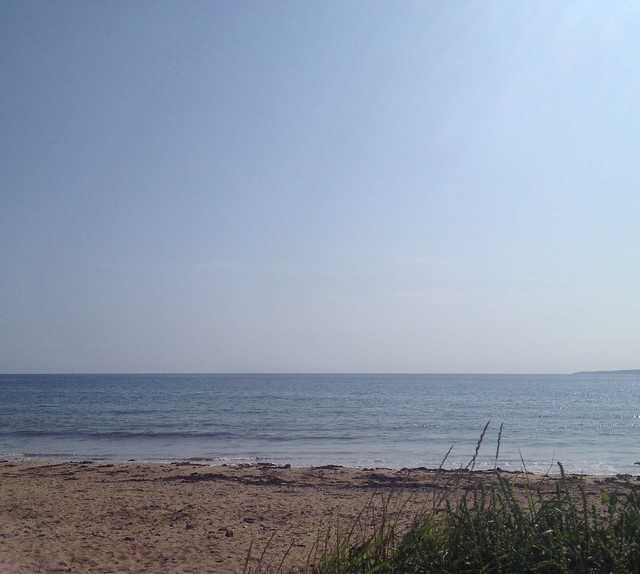 Join us for our next installment, when our heros return to Dublin.