I had my leaving drinks at work last Friday. I was scarred by a leaving drinks I once had in Brussels where nobody came for the first hour and I hung around with a couple of colleagues until some more arrived and took the bare look off the thing. When there was a reasonable crowd, my Finnish boss came up to me and said, “Yes, I can leave now as there are finally some other people here.” I love the Finns but their frankness can be alarming.

My colleagues assured me that there would be a good crowd and I need not fear. They were right. I left event management in the hands of a colleague who is also a member of the social club and due to an unfortunate misunderstanding which was no one’s fault etc., I ended up having my leaving drinks in a sports bar. It was loud. As someone said to me, sarcastically “When I think of you, I think dozens of large screens, cricket and rap music; it’s perfect.” Another observed that it was the first time in many years that most of us had been to a venue where they were carding people coming in. But, you know what, it was absolutely fine, if a bit loud – some of the speeches may not have been heard. But that’s not necessarily all bad. People came, and they stayed and they presented me with cards and a fountain pen and a bank draft even though I explained that I was not retiring. After a while the music in the sports bar started getting louder and the strobe lights started up and the middle aged group in the corner began to look a tiny bit out of place. So we went on to the pub and I wasn’t even the last to leave.

Friday wasn’t actually my last day. I came in for three days this week as well and only finally finished today. There’s nothing like running into people in the lift on Monday when they have said an effusive goodbye to you on Friday night. It was a busy couple of days and today, in particular, was frantic but I have done my best and now that in-tray is someone else’s problem. The personal contents of my office, however, which I finally managed to decant to my car at 8.30 this evening are my problem. I am slightly appalled that I seem to have been carrying around so much paper for years including several large, heavy dictionaries.

I am sad to leave but, it was probably time for a change. I did feel sadder and sadder over the course of this afternoon as people came up to my office to say goodbye.

I have had a wonderful boss who has been very, very good to me and hugely supportive; I will particularly miss working with her and she is really sad to see me go, as well, I think. But since she told me to go for the new job; rejigged my CV for it and practice interviewed me for it, it isn’t really a massive surprise to her that I got it (she is like a juggernaut and rarely baulked; though I had my doubts I would get the job, she never did). I have a lot of friends in the organisation I’m leaving and I hope I will manage to stay in touch with some of them at least, I suppose that is the best you can hope for. Last time, I left a job, I changed country as well, this is definitely easier.

On Monday, I start the new job where, doubtless, even now, someone is happily reflecting that his or her overflowing in-tray will shortly be the new woman’s problem.

In the interim, I am feeling popular: 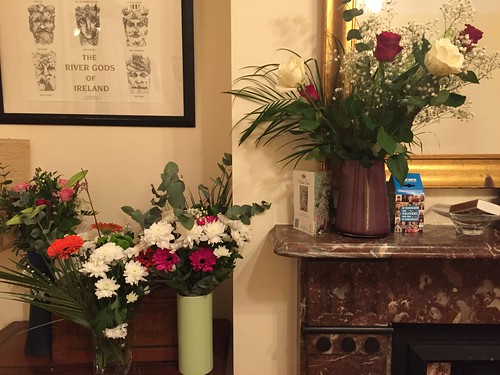 One of these bunches of flowers is, admittedly, from Mr. Waffle for Valentine’s day but still, it’s a pretty good haul.

Upadated to add that despite thinking my office was minimalist and nearly empty, it was not. Alas. 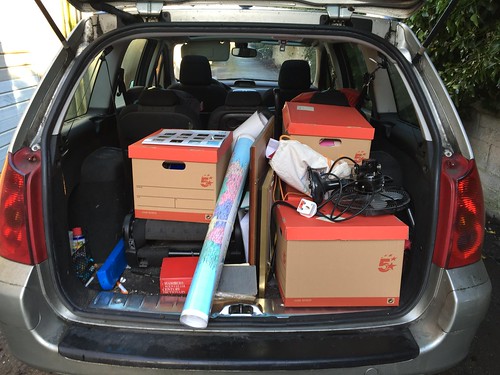