Mr. Waffle and I are tidy. I am the queen of filing and he is the king. People gasp in amazement when they see my tidy office. All of our domestic administration is carefully filed away and (somewhat) regularly sorted through to throw out papers that we no longer need to keep (although, to my knowledge, Mr. Waffle’s bank statements from when we lived in Belgium are still filed in the attic, a fact of which I deeply disapprove – you may recall that we last lived in Belgium in 2008). All this to say that, you know, we are not the kind of people who can’t find guarantees or passports or papers when we need to. You know how this is going to end, I assume. Stay with me anyhow, why don’t you?

Herself is going to Rome horribly early tomorrow morning for a mid-term school trip. She has been counting the days since September when she first heard about it. The programme is daunting. They are going for five days and will visit Rome (Vatican museums, the Forum, Pantheon, Spanish Steps, Trevi Fountain and anything else they feel up to – one of the teachers seriously suggested to me that they might go bowling one evening, insert your own sardonic comment here), Pompeii, Naples, Sorrento and the Amalfi coast.

She spent the weekend packing. After dinner this evening I went to get her passport out of the drawer and it was there. Of course it was there. I went to get her European health card from the shoebox where we keep these things. Daniel’s was there. Michael’s was there. I emptied out all of the non-EU currency, the Belgian bus tickets, the Paris metro tickets and the foreign stamps which also live in the shoebox but there was no sign of the Princess’s health insurance card. We searched in all the likely places: the desk drawers, the health insurance folder, the folder for herself, all the other folders just in case. It was unfindable. She had had to bring it into school twice so that they could verify that she had it. In light of this I felt that the authorities were likely to check in the cold, pre-dawn Dublin airport whether she had brought it with her. We kept searching. It turned up sticking out of the Lonely Planet guide to Paris on the book shelf. I am not the better of it.

It was also Valentine’s day and my husband got me lovely flowers and a card. I got him some stroopwafels and only because yesterday morning, herself said to me, “I hope you know that Daddy is getting you something for Valentine’s Day.” He took the boys to a reading in the National Library while I scuttled around hoping to find something he might like. I am not sure that he was absolutely thrilled with the packet of biscuits, now. Sometimes I feel that Mr. Waffle gets a poor deal. Guess who is getting up at 4 in the morning to drive our precious first-born to the airport? Not me, I fear.

Have a photo of the boys checking out the National Library reading room: 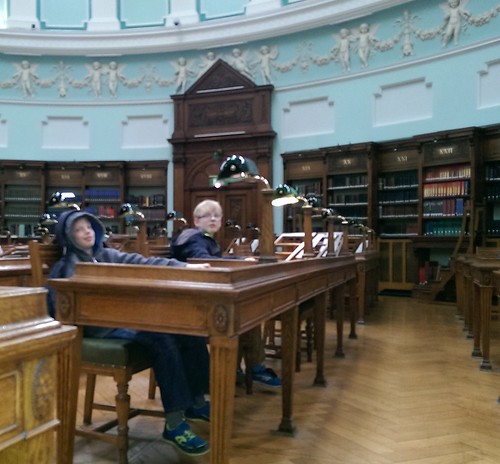 Earlier today we climbed Bray Head. This was inspired by Michael who needed to do it for some scouting badge. He was pleased to be going. The others, possibly less so. However, we met the cousins and they were all happy to see each other and ran up cheerfully despite the biting wind. A further aim of the trip was to ensure that herself and Mr. Waffle were tired enough to go to sleep early. Any benefits in this regard were entirely offset by the health insurance card trauma.

Still, nice views from the top: 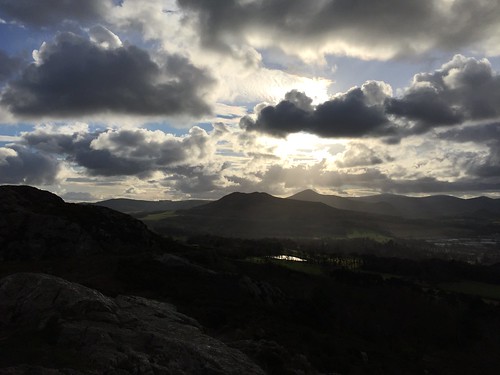