So, this is the centenary of the 1916 uprising. Sadly, we haven’t got an additional bank holiday as the rebels chose Easter Monday for their revolution and it was already a holiday. What, what’s your point here?

In fact April 24th is the actual day of the rising but it is always celebrated at Easter so we have had much excitement in the run up to the big day.

Shortly before the Easter holidays started, the boys announced that on the following day (it was ever thus) they had to dress up in historical costume for school.   Daniel was pretty sure that it was a figure from the Rising. Michael felt it was anyone from Irish history. So Daniel went as Michael Collins and Michael went as a druid. Their sister used all her genius to put together costumes for them at short notice. For added authenticity Daniel actually had coins from 1916 in his pocket. He knew they were there which I suppose helped him put in a solid performance as Michael Collins but he didn’t actually show them to anyone. 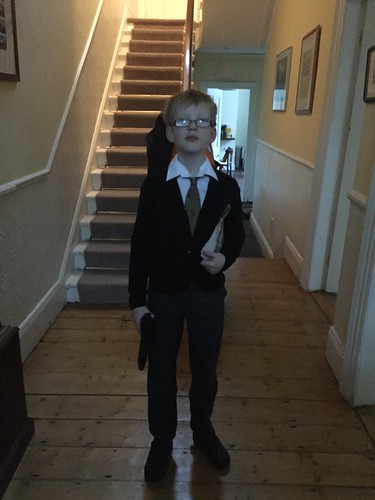 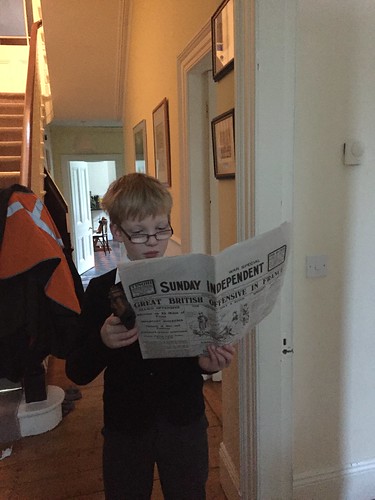 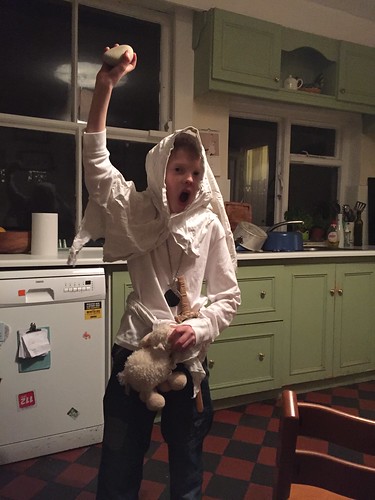 They had the flag raising ceremony on proclamation day in both the primary and the secondary school. Michael was home sick and missed it but Daniel had a starring role – he got to read the Aisling poem aloud in front of the school. The short ceremony seems to have passed off pretty well.

Meanwhile in the secondary school, they had a very long ceremony involving much singing and speech making. Herself got to read her prize-winning 1916 poem out in front of the school. “Did they think it was good?” I asked proudly. “Well,” she said” I think that they were glad it was short.” They had had to listen to Douglas Hyde’s speech on “The Necessity for De-Anglicising Ireland“. Originally delivered in 1892, I think it may have lacked the zing of the modern TED talk and tried the largely teenage audience quite high. Though, as I pointed out to her, if they really believed in de-anglicising Ireland, the speech should have been delivered through Irish. That got a cool enough response.

This morning we went to inspect the various organised Rising related fun in the city centre on our bikes. The Princess who had, quite nobly, dragged herself from her sick bed to come along, greeted with horror the news that we were to travel by bike but it did work well, particularly when much of the city centre was car free. O’Connell Street, heart of the Rising, site of the GPO etc. was a little dull. Michael looked scornfully at the children singing beautifully on the makeshift stage and said, “I pity them, all the practising they had to do and now they have to wear these stupid clothes [sailor suits] and sing here on their day off school.”

We had better luck in the playground near the fruit market where children were in their 1916 gear and playing authentic games from the era. Michael joined in with enthusiasm and fitted in better than many with his slender frame and slightly pinched features (he’s like a supermodel, never eats enough). Daniel sat by the monument to deceased Irish patriots, site of former Bridewell, and looked appropriately gloomy. The children in the playground had obviously been given a bit of background about 1916 and told to go out and talk about it. I particularly enjoyed the young one who said, “The Volunteers, they think they’re amazing with their guns.” She then proceeded to sashay round the playground with her imaginary gun in a contemptuous manner. I heard another girl call out, “Hey guys, what do we think of the Volunteers?” So, you know, some anachronisms but actually quite endearing. 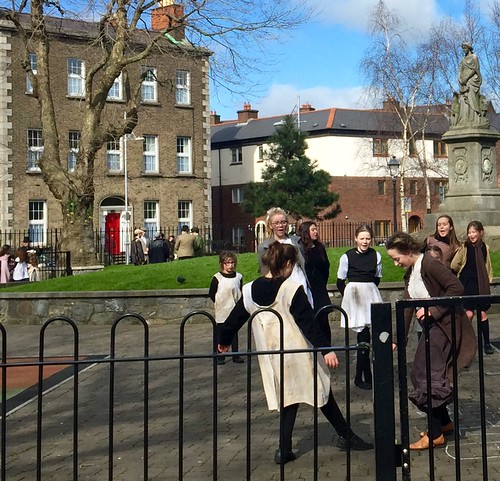 Michael picked up a sword balloon outside the fruit market which was probably the highlight of the day for him. You see him here posing with two members of Cumann na mBan. 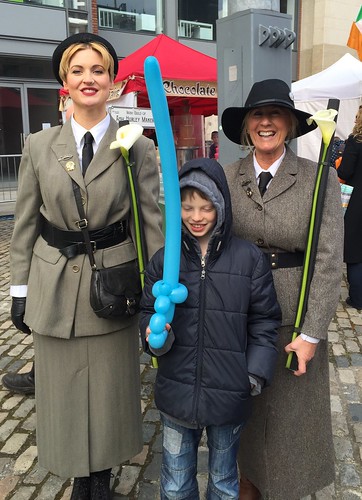 “You know, my granny was in Cumann na mBan,” I told him. Level of interest: zero, alas.

For reasons unknown, there were a number of tanks and soldiers stationed on Smithfield Square also and we had an interesting chat with a soldier who had been in Chad and the Lebannon. Probably a highlight for me. The children ran into some classmates who had dressed up in 1916 gear which was exciting for them. We bought them food from the extensive range of food stands. It was, dare I say it, reasonably successful.