Mr. Waffle and I celebrated our 15th wedding anniversary on Thursday, July 28. As we got married before having children and when Mr. Waffle was in a different line of work, that was, then, a relatively quiet time of year. Now the children are on holidays; it is one of Mr. Waffle’s busiest times of the year and we go on our family holiday immediately after.

This year has been particularly difficult as for the last number of years, I have been able to take unpaid leave over the summer but it wasn’t possible this year. We kept our childminder on for the afternoons and signed the children up to a couple of courses and Mr. Waffle took up the slack. It was all a bit stressful. Unfortunately, herself was ill for almost all her course and the week before the boys were due to go on their course I got this plaintive email from my husband.

To: Me
From: Mr. Waffle
Subject: Re: All well at home?

To my horror got a call from the sports camp I thought the boys were doing a course next week but apparently it’s this week. Will have to see if they’re willing to go for the last three days and if [childminder] can do afternoons. Also means we have no course for anybody next week…

In other words, it’s a busy time and we almost, but not quite, forget our anniversary every year. We tend to remember a day or two before when it is too late to do anything but scramble for a not entirely adequate present. For example, the internet tells me that crystal is the appropriate offering for a 15th wedding anniversary; I got Mr. Waffle a book and he got me flowers [very welcome flowers, I hasten to add].

Happily, this year, our firstborn surprised us and when we came home from work, the table looked like this: 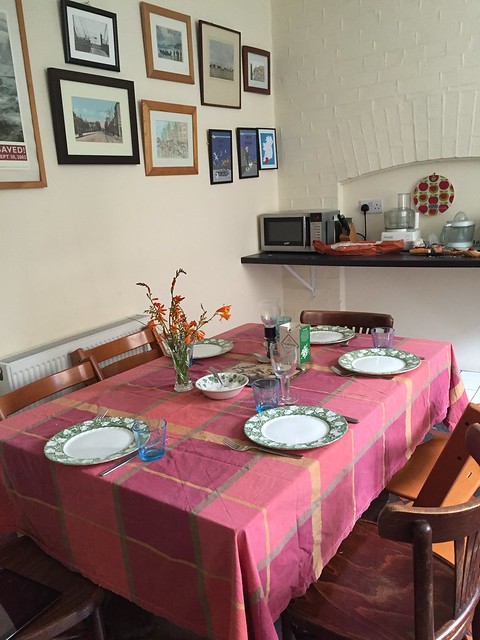 She made us risotto for dinner with help from Daniel and Victoria sponge for desert and it was amazing.

Also, I still love my husband, which is great. He sends me funny emails. Samples below:

From: Mr. Waffle
To: Me
Subject: Signs and portents

My laptop is being weird and currently refuses to open any files or programs.

Also five slugs in utility room / by back door.

I think I’ll call it a day.

From: Mr. Waffle
To: Me
Subject: What is the best Irish term for Brexit?

I understand someone else came up with these terms but I am always glad to be consulted on matters of national importance.

A couple of weeks ago, the cat brought another pigeon into the house. This time it was not dead. Mr. Waffle grabbed the pigeon from the cat; trapped the cat in the utility room and chased the pigeon around the kitchen (I asked Herself about it – “It was terrible, the pigeon fell in my soup”. Terrible on so many levels). Eventually he was able to usher the pigeon out of the kitchen into the hall while the cat continued to scream blue murder in the utility room. Mr. Waffle said that the pigeon was somewhat dazed but it picked itself up and waddled along the hall and out the front door, somewhat to the bemusement of passers by.

On Saturday evening he rescued the cat from up a tree where she was chased by three small yappy dogs who have moved in across the road. We are not loving them. Mr. Waffle, however, is fantastic.

The other evening I was trying to print off the childminder’s payslip and the printer wouldn’t work. Michael sidled up to me; “Sorry,” he said, “but I think I broke the printer.” “How do you think you broke the printer?” I asked. “I dropped 10 cents down the paper feeder,” he said. I shook it and I turned it up and down but to no avail. “I’m not cross,” I said, “but how did you drop 10 cents into the printer?” Apparently he had been practising coin flips and it had just escaped away from him. After the last unfortunate demise of a printer, my clever husband had taken out a guarantee. €12 well spent. We now have another new printer. I think love is in the details.

Think of us having another delightful anniversary dinner in France. After all, 15 years is definitely worth celebrating.