I got a message from my sister about an incident in west Paris to which I forgot to reply. By the end of the day she was worried we were all dead and buried.

We were not. We were wet and, to varying degrees, bored. It lashed again. We went to the Musée des Arts et Metiers which I dimly remembered visiting years ago. I remembered that I liked Foucault’s pendulum. Our guidebook (treacherous Routard) recommended it for children.

Things began positively enough. The reception staff were charming (all of the people left in Paris in August seem to be delightful, I cannot imagine why, as working when almost everyone else is on holidays is, surely, very distressing). The lady who gave us our tickets asked where we were from and when we said Ireland she said that of course we must be as we were wearing green. Coincidentally, we were, and I couldn’t be bothered disabusing her from the notion that all Irish people wear green abroad for identifying purposes. “What’s your favourite episode of Father Ted?” she asked. After some consideration, Michael suggested that it was the one where Mrs. Doyle fell in love with the milkman. “I love Fr. Ted, “ she said and, pointing at her fellow ticket desk operative, she added, “I’ve got him into it too.”

We started off by visiting the pendulum. It’s housed in an old church and there are also various interesting old airplanes and cars. That’s the most exciting bit. Don’t start there. The museum is really a hymn to the cog and, if engineering is not your thing, possibly best avoided. I was mildly impressed by the recreation of Lavoisier’s laboratory but the children were not. Many of the interactive displays which, in and of themselves were not exactly fascinating, were broken which didn’t help.

Here are some of my children enjoying their visit. 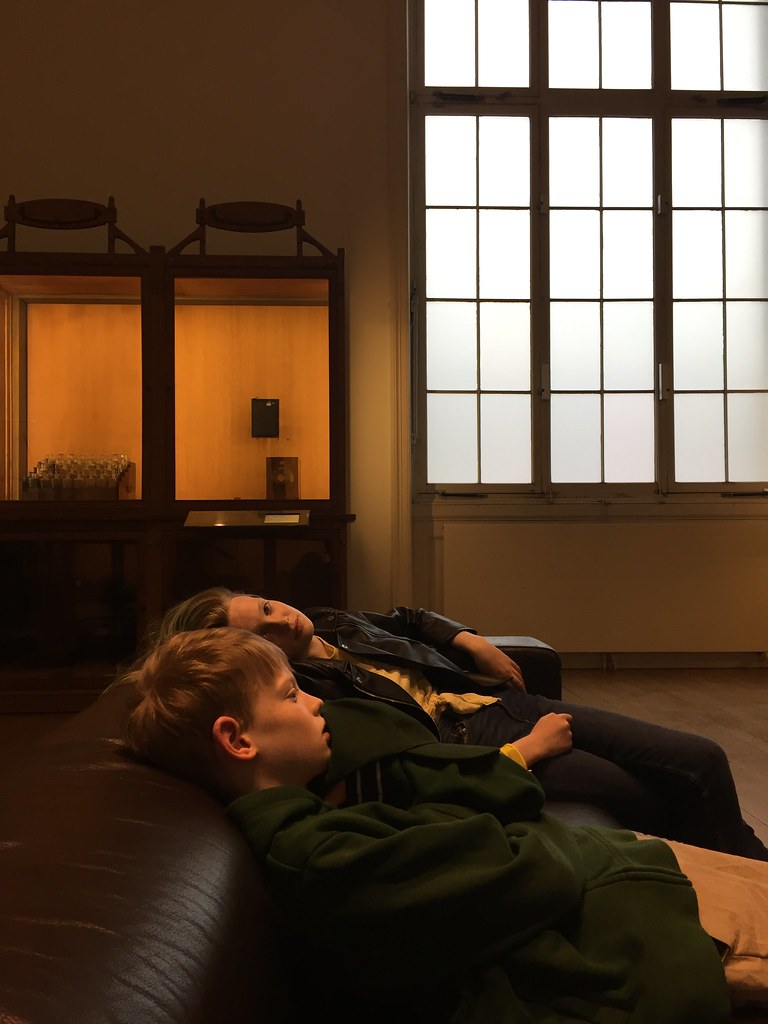 The highpoint was meeting a charming French toddler whose parents were also looking for something to do in rainy Paris in August. Frankly, not a success. The Metro station was pretty cool though. 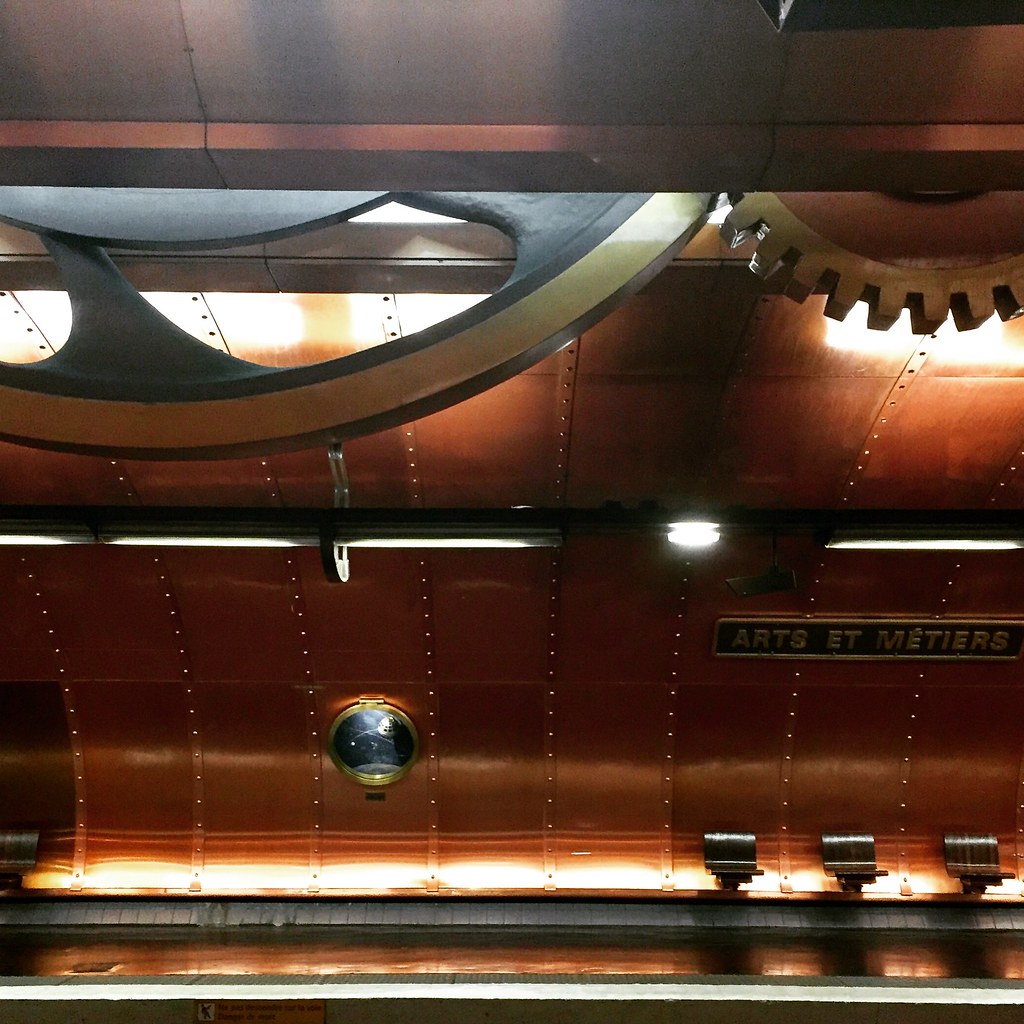 We awoke to further torrential rain and, leaks everywhere. We were veterans at managing the various buckets required at this point and worked like a well oiled machine to catch drips. It reminded me of primary school when the pre-fabs leaked.

We decided to go to the Louvre. To avoid queuing, Mr. Waffle booked tickets online. Sadly, we couldn’t find a printer in the French people’s house and he had to comb the mean streets of Paris in August to find someone willing to print out the tickets.

The pre-booked tickets did the job. Although there were millions of people and we did have to queue for ages for the toilets we sailed into the gallery itself. We did a highlights only tour: 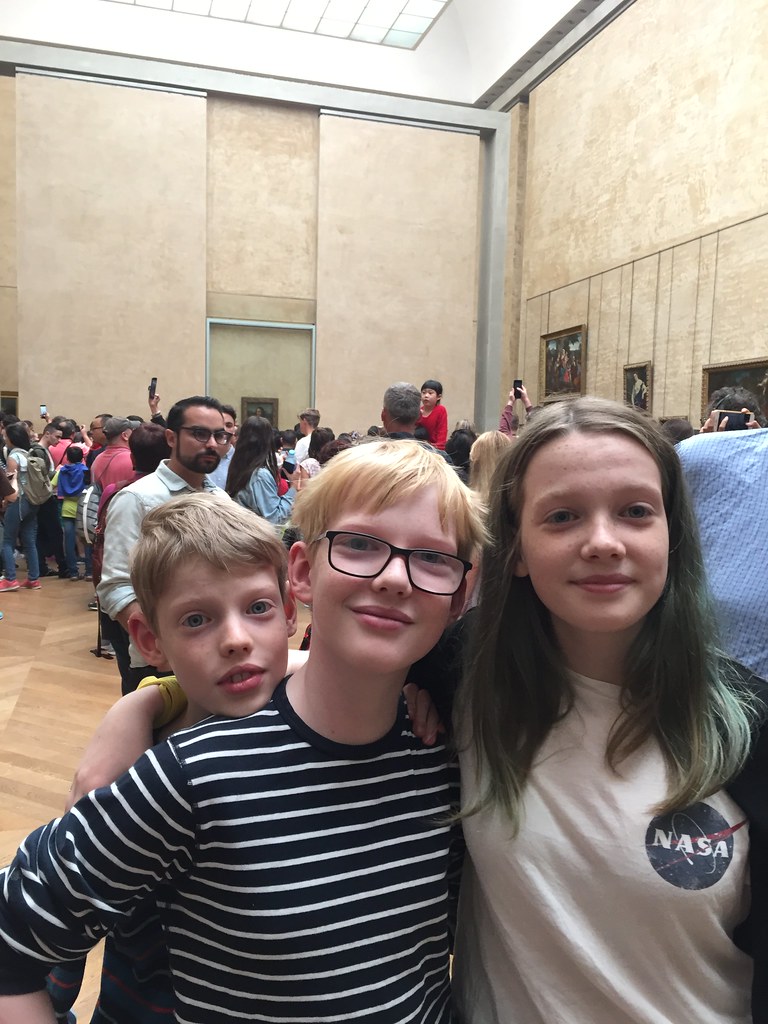 -the winged victory of Samothrace (for some reason, no picture, maybe she was submerged beneath the hordes) 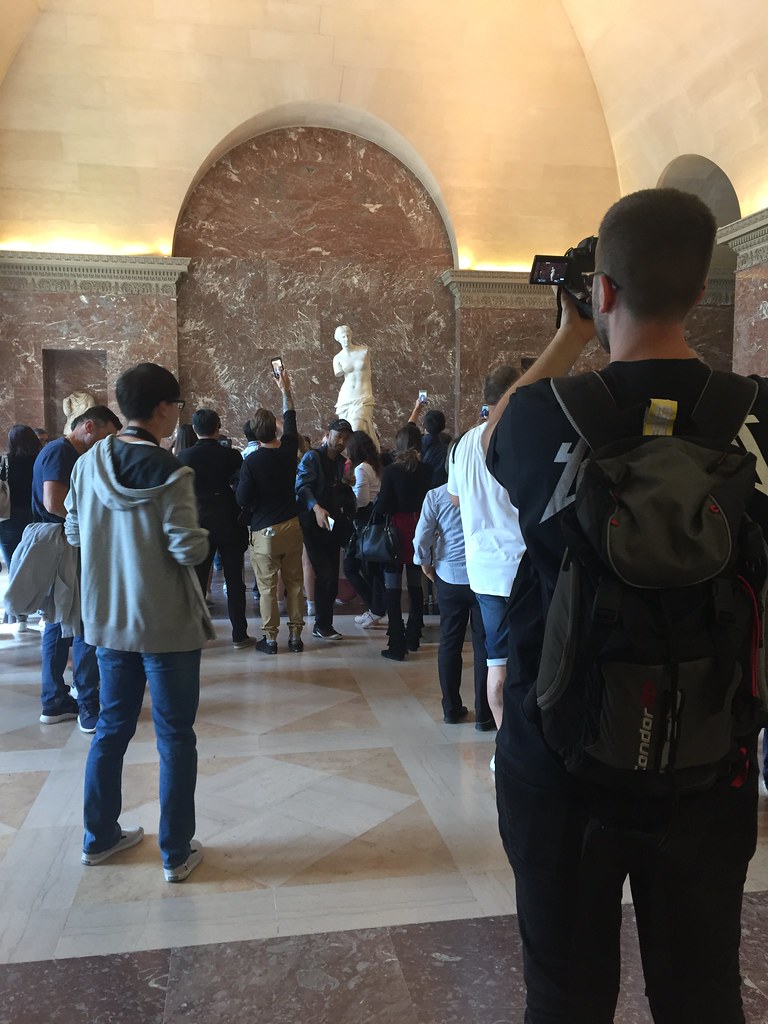 I always feel that art is wasted a bit on galleries like the Louvre. If the National Gallery in Dublin had David’s “The Oath of the Horatii”, Vigée-Lebrun’s self-portrait with her daughter or Ingre’s “Grande Odalisque” all of which we noted in passing, you can bet they would get a lot more avid attention from the visitors than they do in the Louvre.

There was active interest in looking at the ancient Greek, Roman and Egyptian stuff and these rooms were a bit quieter. 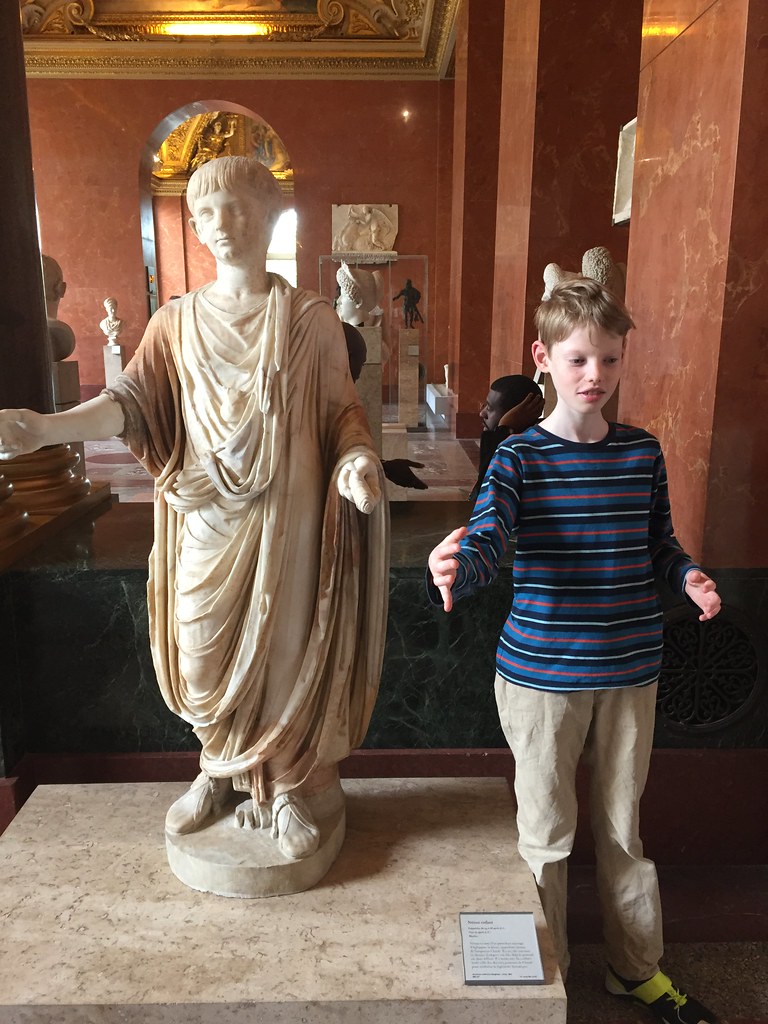 We were exhausted at this stage and found ourselves near an exit so I suggested we might go out and come back in for our coats. Mr. Waffle was dubious but he was right. Once out, they weren’t letting people back in whether it was a suspicious parcel or overcrowding, we weren’t getting in for a while. Happily the rain had stopped.

I said that I would take them all to Café Marly, my treat. It’s a lovely café with a view over the pyramid of the Louvre and quite eye-wateringly expensive. I have been there before only in circumstances where all parties paid for their own fun. It enjoys a special place in our relationship also as it is there that I discovered from Mr. Waffle and the French waiter that I had been pronouncing mille feuille wrongly for years (ah, happy memories, it is particularly hard to pronounce, Cork people have got around this by saying milly filly, my variant on this was entirely unintelligible to the waiter and Mr. Waffle had to leap in and help me out with his smooth knowledge of the pronunciation of French vowels – particularly challenging).

Here are some of my children enjoying the exquisite setting of the Café Mary. 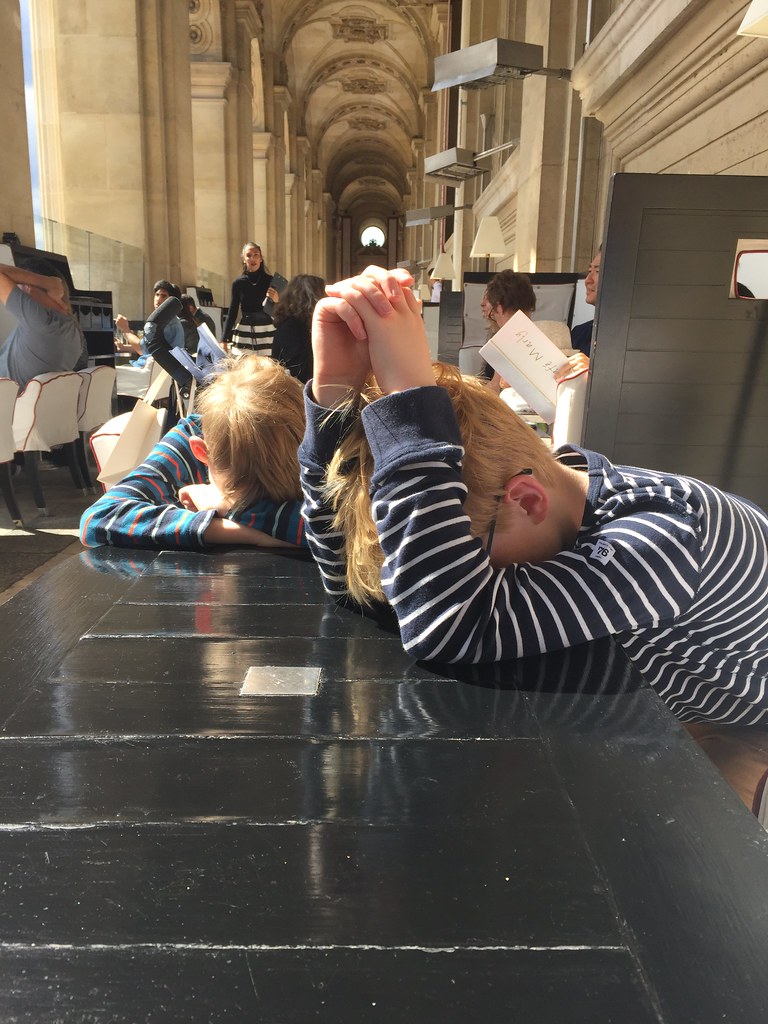 Our bill for three slices of cake and a drink for everyone in the audience was €76. Even the waiter was slightly appalled. Frankly, for €7.50 for a pot of tea I would have hoped for more than one cup in the pot. I hoped in vain.

Herself and myself went back into the Louvre for the coats. “Let’s look at one thing before we go,” I said, “whatever we see will be amazing.” We found ourselves wandering among priceless Gobelin tapestries but, it takes a certain kind of person to be amazed at tapestries and we were not that kind of person. We did some damage in the gift shop though. 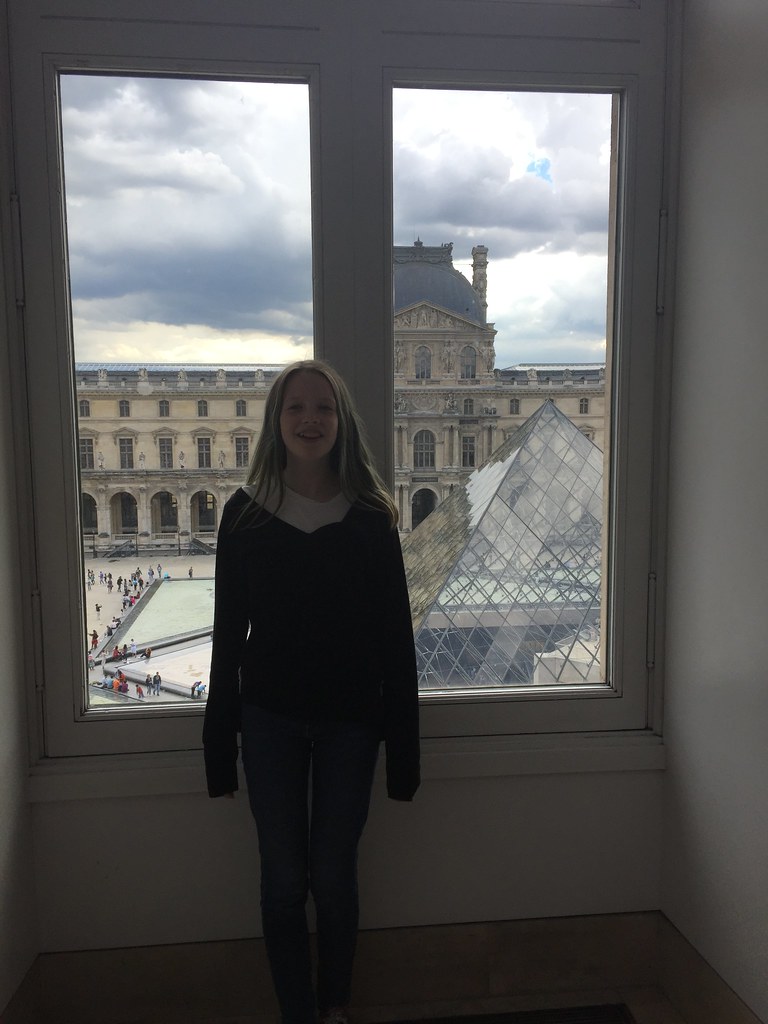 We then went to join Mr. Waffle and the boys in the Tuileries funfair which was a great success and not shockingly expensive given its location. Mr. Waffle tells me that the Canard (French satirical magazine) is much preoccupied by the tendering process and how one person has a stranglehold but, to be honest, it’s not really much dearer than any other of these things.

We enjoyed it. The view from the Ferris wheel was great and there was no queue for anything. A big plus for any attraction in Paris in August we were rapidly discovering. 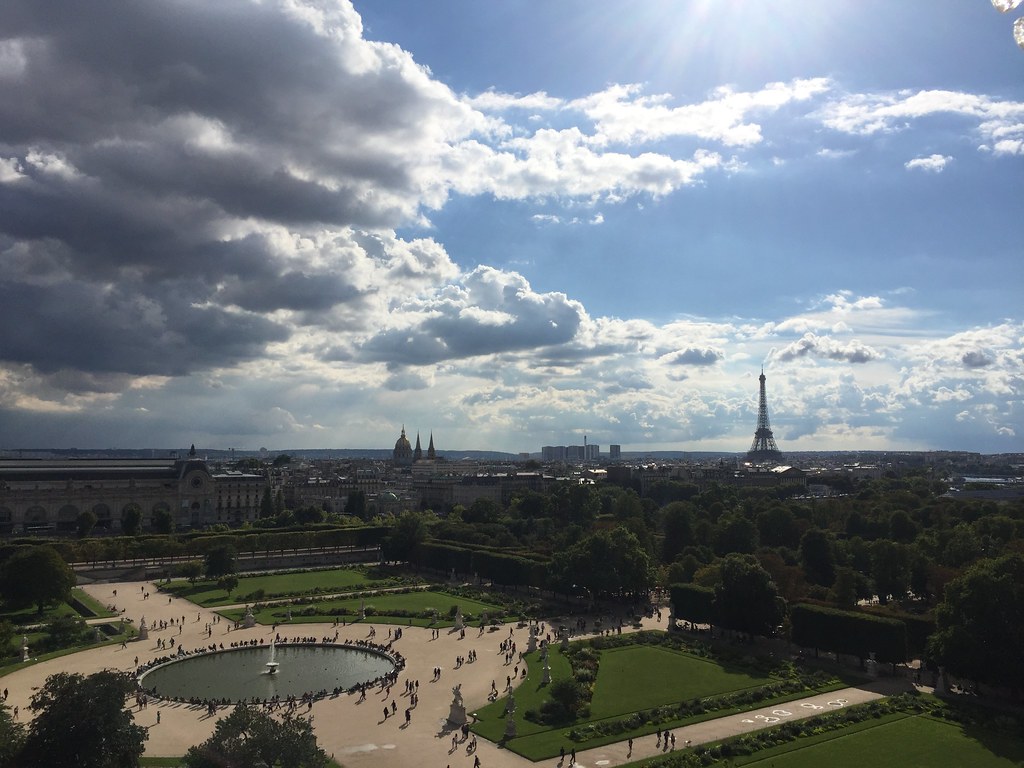 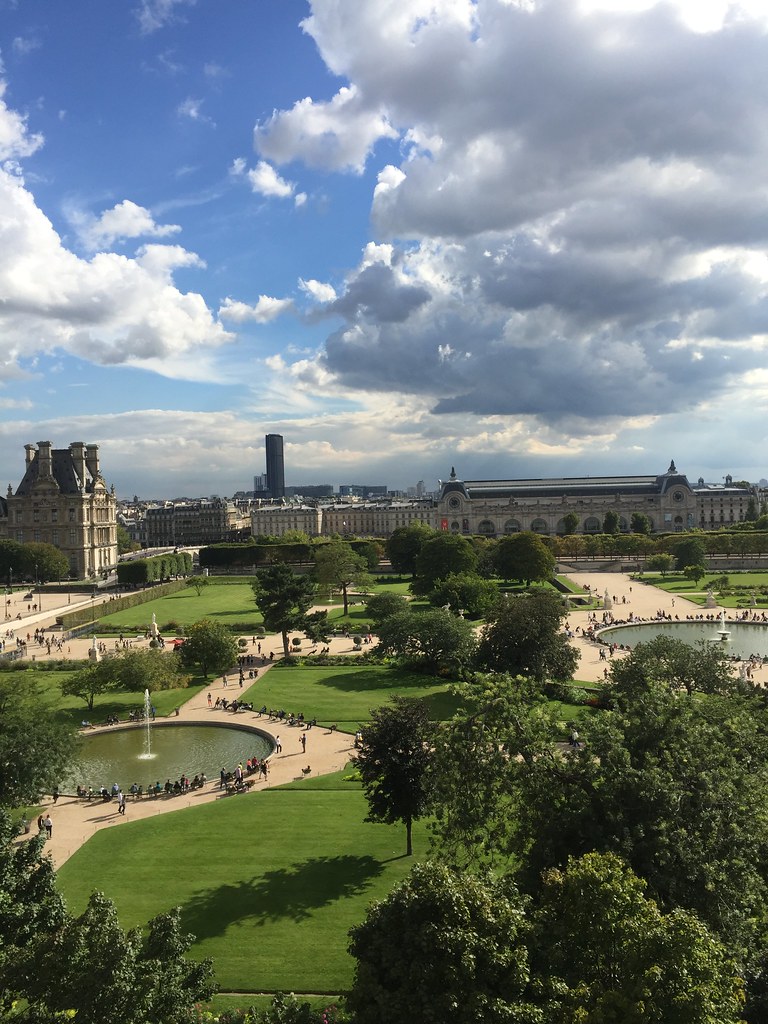 The sun was out for most of our trip to the fairground and once it started to rain, we decided to pack up and head home. As we were tramping along the Rue de Rivoli we passed the English language bookshop and picked up a copy of a book that day published by a family member. The glamour, the excitement.

Having consulted with the children, they said they would like to go to the aquarium. We went. It was grand as aquariums go. 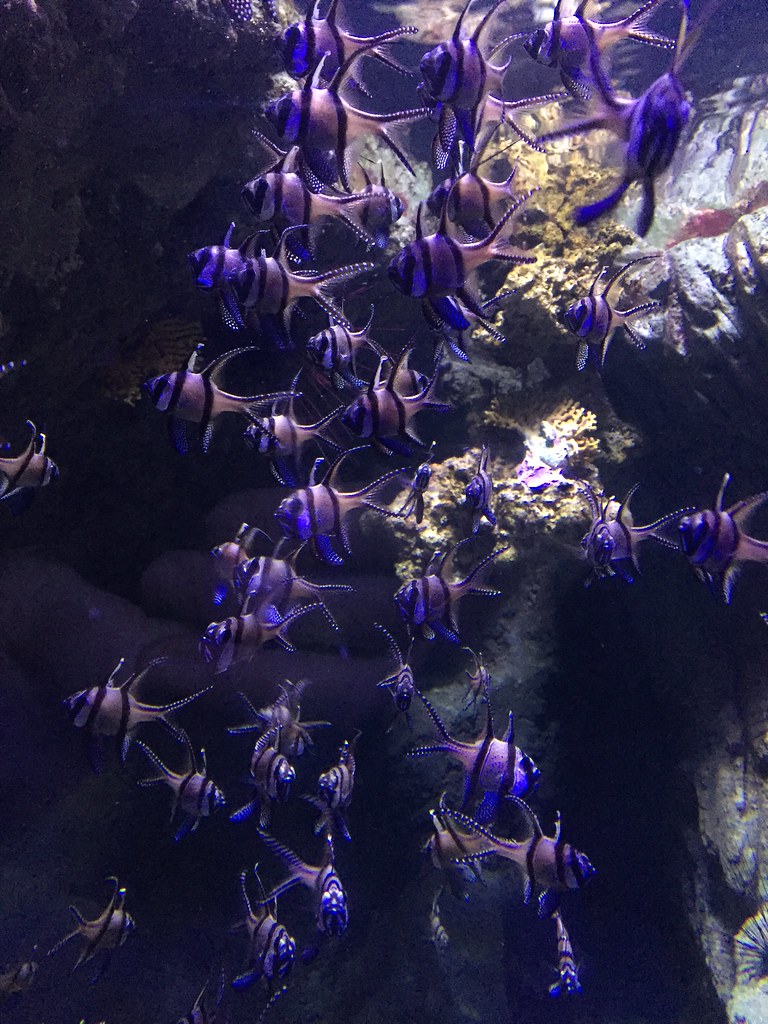 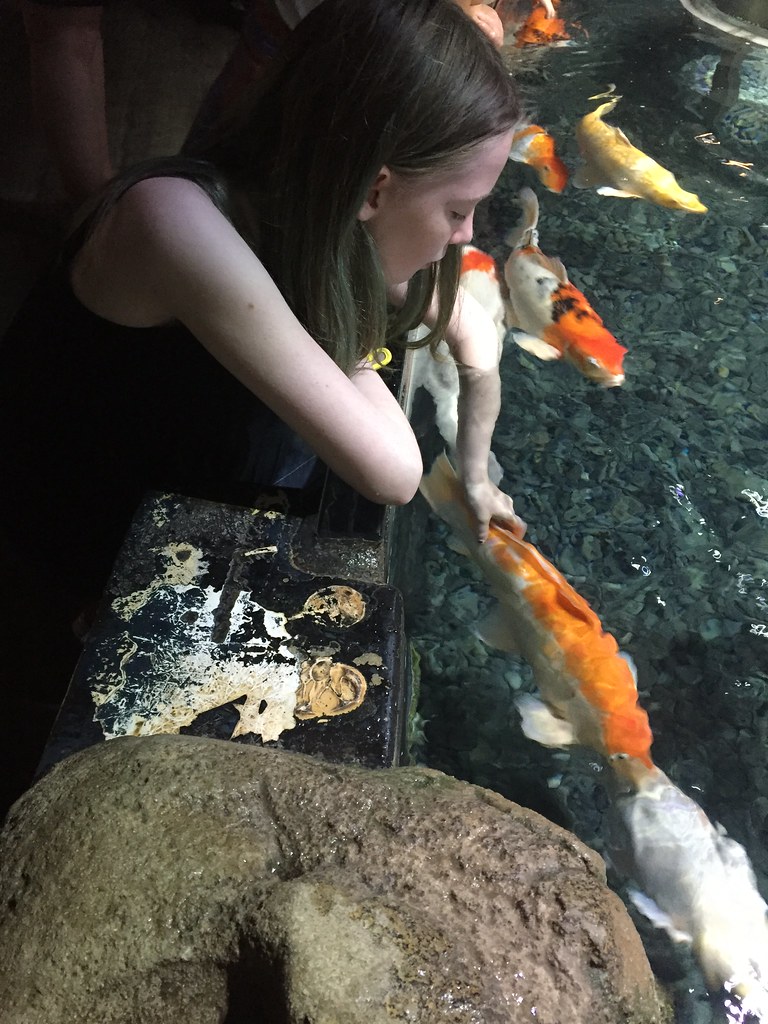 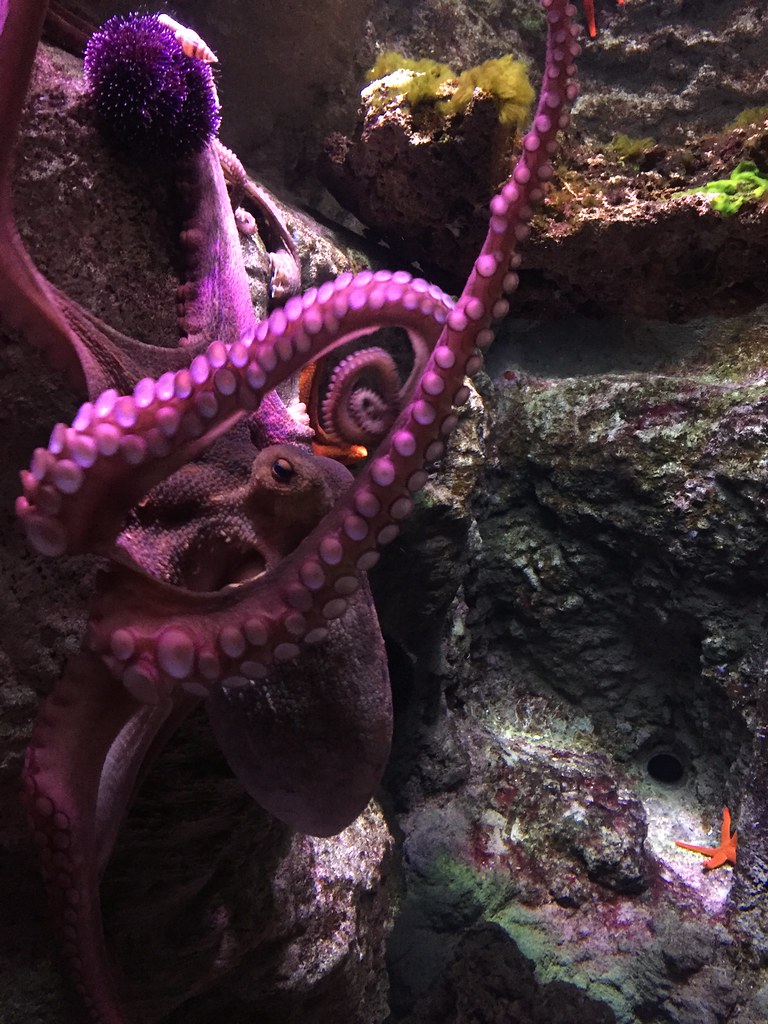 We were adjacent to the Eiffel Tower so we decided to go up without booking tickets in advance. Can I emphasise how unutterably stupid this was? At least it wasn’t raining or too warm. We waited 2 hours to get through security. We waited a further good hour at the foot of the Eiffel Tower to get the lift up as we decided that we couldn’t face walking up. We had ample opportunity to regret this decision. We eventually got up to the second floor but the top was closed, due to numbers, I think. Although it re-opened while we were on the second floor there was zero appetite from my queue weary family to queue further for tickets to the top. We went back down by the stairs and Mr. Waffle bought me an overpriced cup of tea and we sat and looked at the view on the first floor while the children explored which was mildly pleasant but, overall, frankly, not a success. 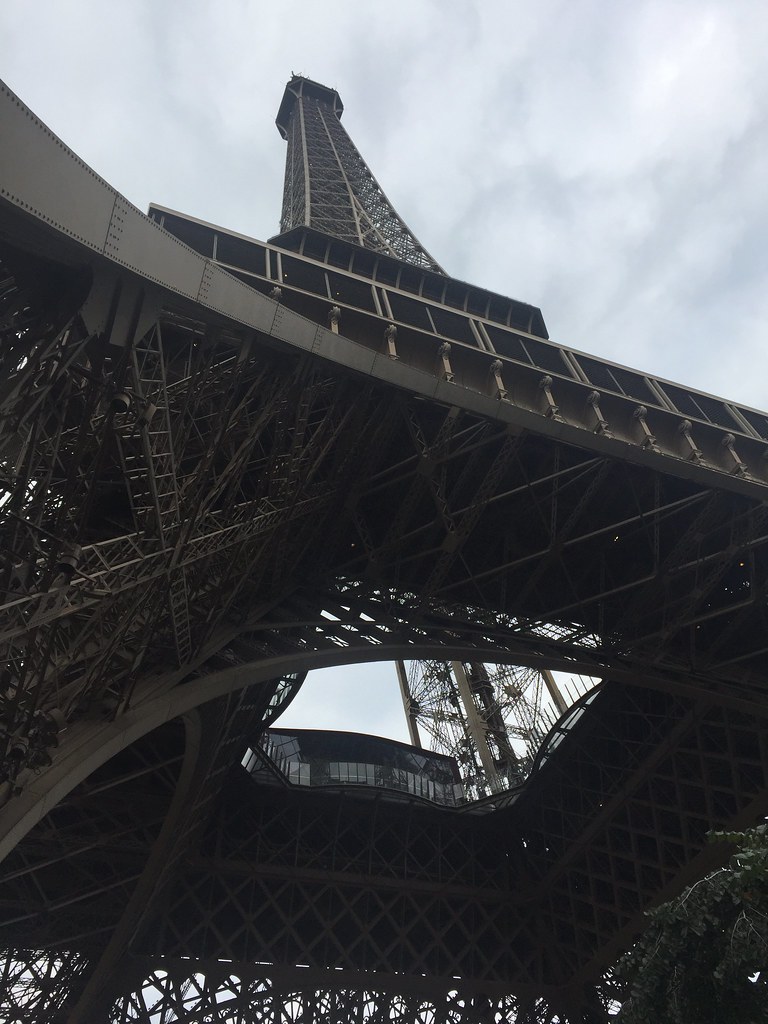 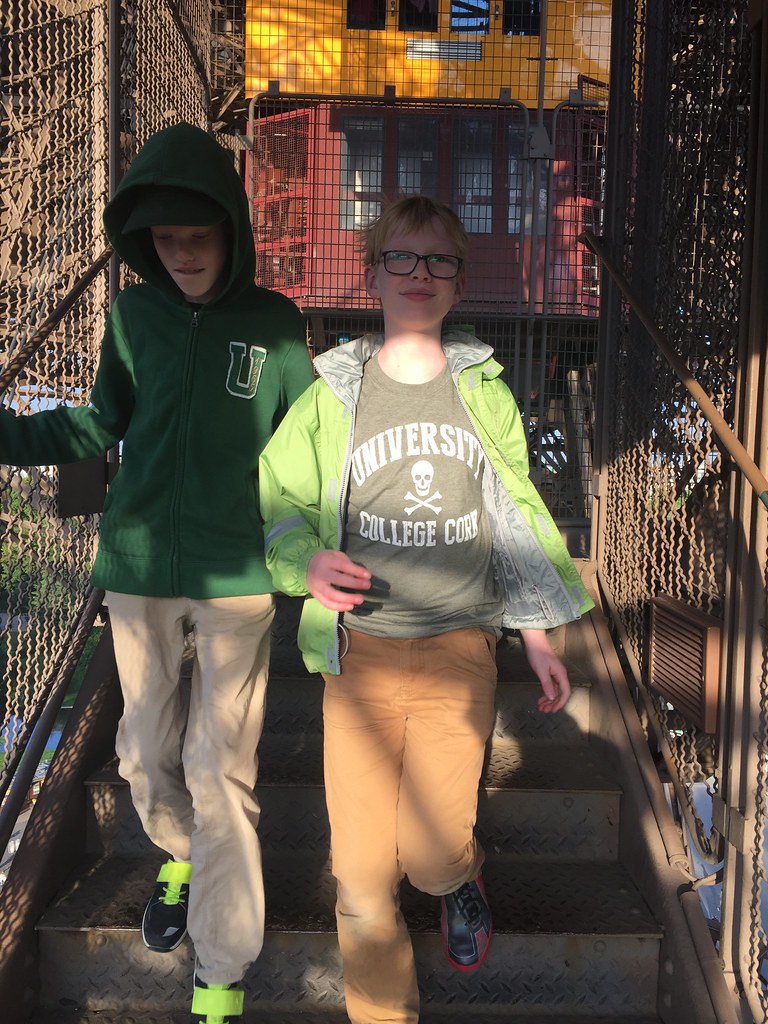 By this time it was late and we were all starving. We decided to go to Leon which is a Belgian chain specialising in mussels and chips. Using the amazing free roaming (heartfelt thanks, European Commission, heartfelt thanks) we looked up the handiest branch and I rang them to book a table. “No need,” they said cheerily, “there are always tables available”.

We marched to Pont d’Alma, which is further than you might think from the Eiffel Tower (everywhere looks close when you are up high), only to discover that the RER was closed and a replacement bus service was laid on. We gloomily took the replacement bus service and eventually arrived at our mussels and chips destination after 9 to find a queue out the door. We were down hearted. No need to book, indeed. Mr. Waffle went off to inspect some neighbouring brasseries and the children and I dolefully joined the queue. It moved fast and in 5 minutes we were sitting at a table with menus in our hands. When we needed Belgium to feed us, it did not let us down. Quite honestly, it was, I think, the most successful dining out experience of the holiday.