Herself was 15 last Thursday.

She continues to become ever more independent. She is completely on top of all Dublin public transport options. Her leap card (automatically topped up via her father’s account) is her most treasured possession. She is a city girl and knows the city centre inside out.

She dyed her hair blue last summer but it mostly disappeared when we cut it short in the autumn but you can still see the occasional green streak. 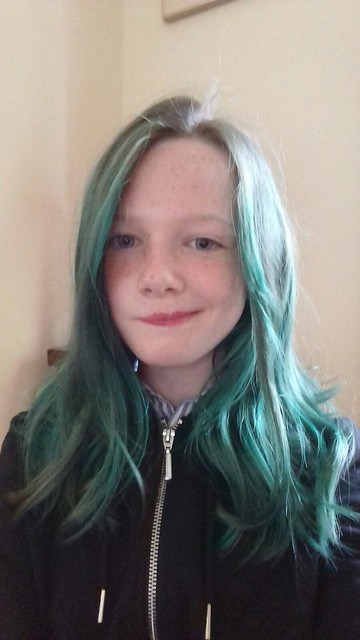 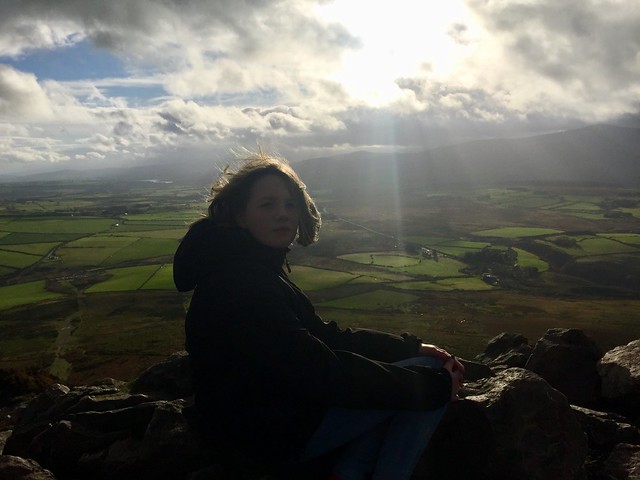 She still reads a great deal. Lots of poetry these days. She seems to be doing fine with her school work although, as she approaches the year end examinations, she seems to be studying rather less than she did, say, last year. My message that examinations don’t matter may have landed a little too well. We will see.

She is doing a fair amount of singing as well. She’s doing a solo at a concert at the start of May and she has some role in doing something pre-recorded for the world meeting of families (the Pope is coming in the summer – we will be on holidays, Pope or no Pope).

She and her brothers are getting on a bit better, though there is still some bitter rivalry with her brother Daniel. Herself and Michael run on parallel grooves so it seems to be less of an issue. 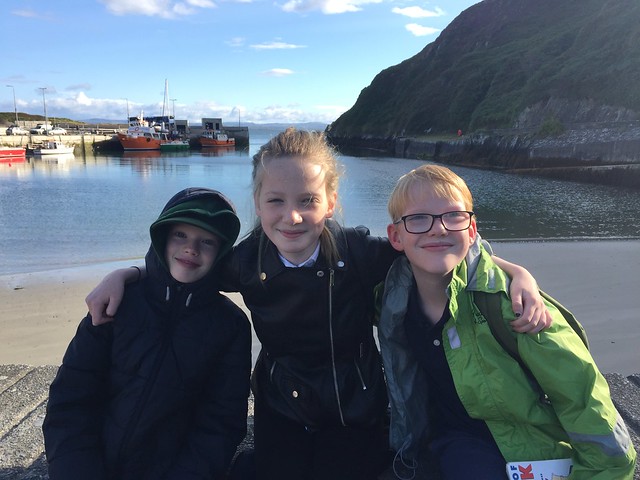 Her spoken French continues to be pretty good and she quite likes French. She’s a much sharper (in the sense of making more pointed remarks) and somewhat more sophisticated person when she speaks French rather than English. Why should this be? Does French lend itself to this? Is it merely my own perception? 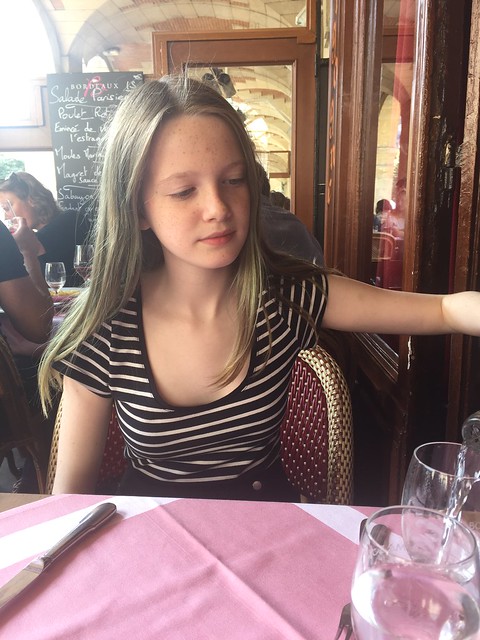 I knew, if I persisted, she would grow to love Irish. I was not wrong. Despite herself, she does like Irish and she has got very, very good at it. 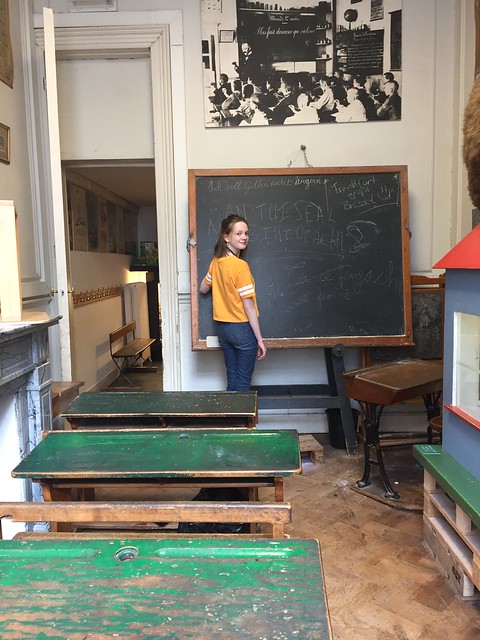 Her room is less of a fastness than it used to be and I am reasonably regularly allowed in, it’s not as exciting as it was when I used to be barred from it, of course. 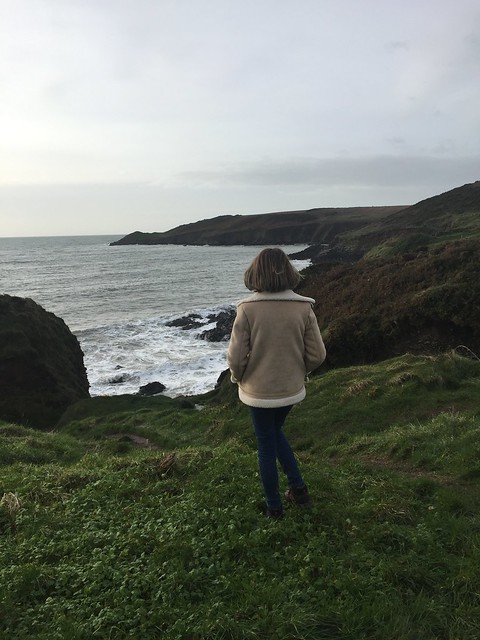 She is on every committee going. She knows about event organising, agendas, ice breakers, digital marketing, policy papers, consultations, campaigns, you name it. She is always agitating to go on protest marches about an extensive range of issues. I mentioned that something at work was discussed under “AOB” and she knew exactly what that meant, whether that’s a good thing for a 15 year old to know or not is a moot point. She is an excellent public speaker (these facts may not be unrelated). By way of example on her birthday, in the morning she was sent off as a school rep to a disability rights conference (where a disability rights activist sang happy birthday to her from the podium and she got to take home lots of balloons) and in the afternoon she was part of a group giving young people’s input into a “Creative Ireland” festival. There’s a lot of this kind of thing.

She seems to have lots of friends and is in regular contact with everyone via her phone. I sometimes think that the “always on” nature of this is a bit demanding and she could do with a bit of a break. 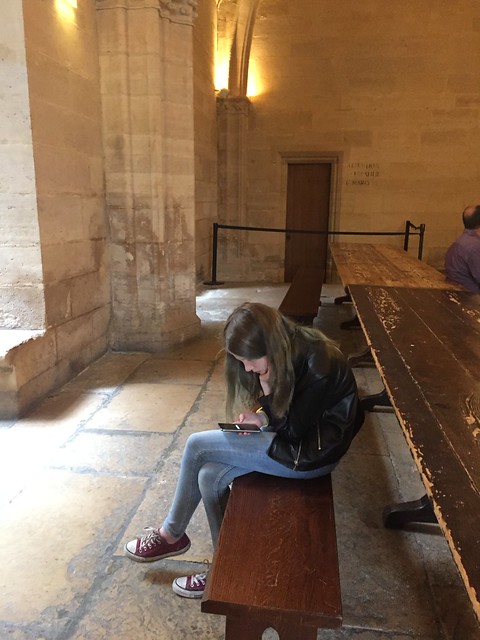 I was pleased (and surprised) when she and some friends, of their own volition, went to the Gallery when they were in town. I am not sure that this is a regular occurrence but, you know, it is warm, dry and free so, definitely not to be sniffed at. 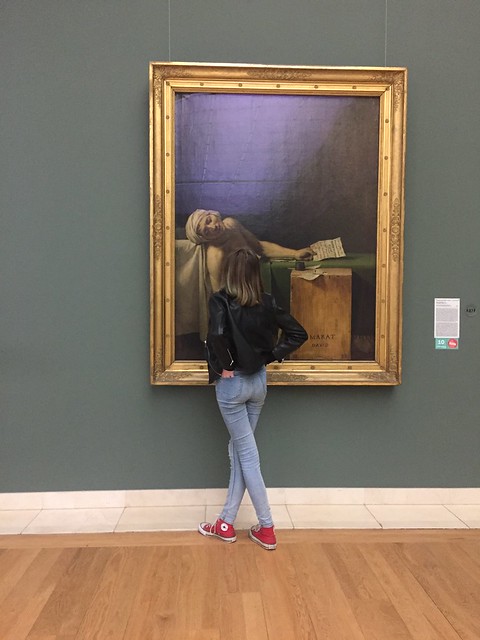 I find her considerate and obliging, although it is a little unnerving that she can very often read my mind. This makes her extremely sensitive to my tea needs which I like but also inclined to say, “I know you are judging.” The teenagers are all into gender fluidity now and it’s far from gender fluidity I was reared so I am inclined to say the wrong thing when I meet her friends who are they/them. But I am trying and they acknowledge this although herself has considerably higher standards for me than they/them. Standards which, sadly, I am failing to meet but only because she can read my mind and she knows that I am thinking they/them can’t be used in the singular. I am trying to change because she has made me understand belatedly that people are more important than grammar.

She is a vegatarian now. As my sister said, “I am surprised that you got away with her not being a vegetarian for as long as you did.” We’re having tofu for dinner tonight. How much do I love my first-born child? Very much indeed is the answer. Favourite vegetarian dinners in the comments please. On the plus side, she does now eat vegetables which is a definite bonus.

She is champing at the bit, dying to be an adult. I wish we could persuade her to wait a little bit longer but, I suppose, that’s not the way that it works. 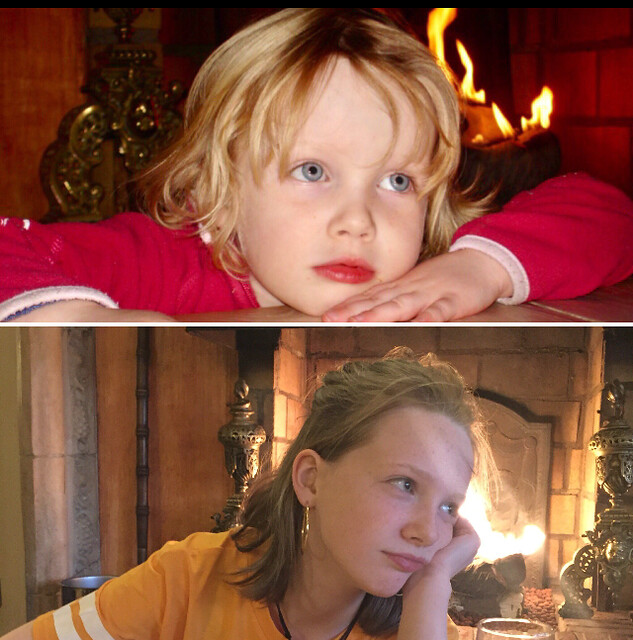