Daniel was 14 on 27 September. As ever, his birthday post is a little late.

He still enjoys listening to music a lot and he is by far the best dancer in the family (not as impressive an achievement as it might be). He still sings in the church choir. I thought he might want to give it up but he really likes it. There are a couple of them who are about the same age as him and quite a lot of younger children. He towers over them all like a young Viking (he is still very fair) but it doesn’t seem to bother him.

He is far taller than me now and, I imagine, it’s only a question of time before he’s taller than his father. I think he is quite pleased to be second tallest member of the family.

He is still my sportiest child. He supports Arsenal and my sister took him to London earlier in the year and he had a stadium tour which he very much enjoyed. 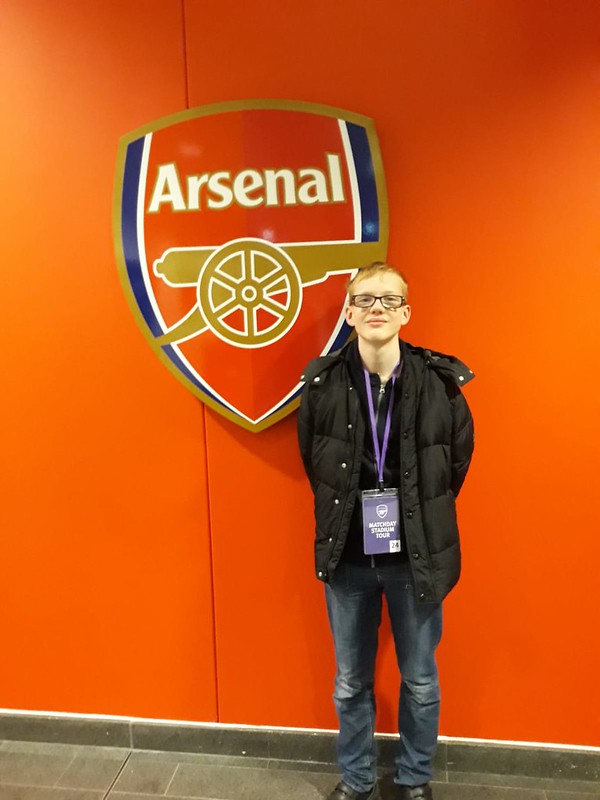 On a more personal level, this year he had an absolute triumph when he moved from the B team to the A team in Gaelic football (an unusual trajectory) and he seems to be solidly in with them now. He is extremely pleased. He is very serious about Gaelic and so are they, something which he feels was lacking in the B team. As he said himself, “Let me put it this way, the A team have 3 players in the Dublin development squad and the B team lost almost every game this season.” Harsh but true. If he ends up dropping back to the Bs he will be devastated but, so far so good. His never-give-up nature has come to the attention of the coaches and they like it. He didn’t wear his gum shield for one kick around and, inevitably, managed to get a kick in the mouth, so it seems probable that he will sacrifice a front tooth for his love of GAA. This is a price he is more than willing to pay but his parents are less sure. His team were very close to winning their league but lost their final match and he was devastated.

He’s also playing a bit of tennis on and off and some basketball with the school. He still cycles in and out to school every day. Frankly, I have no concerns about his exercise levels. 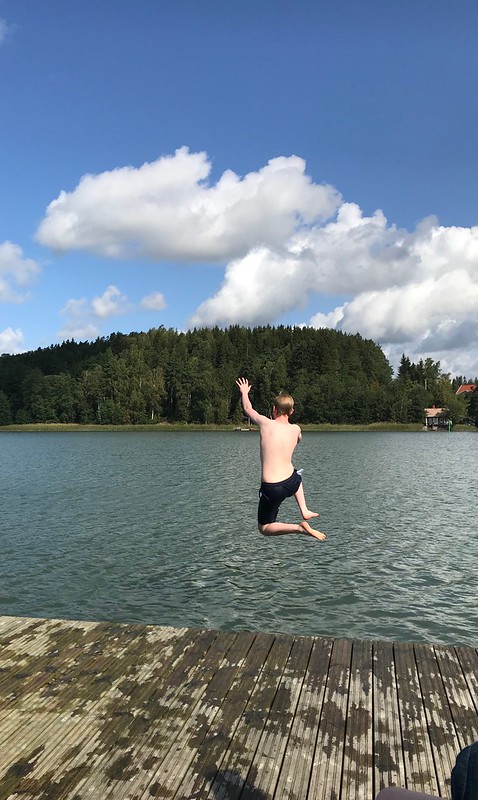 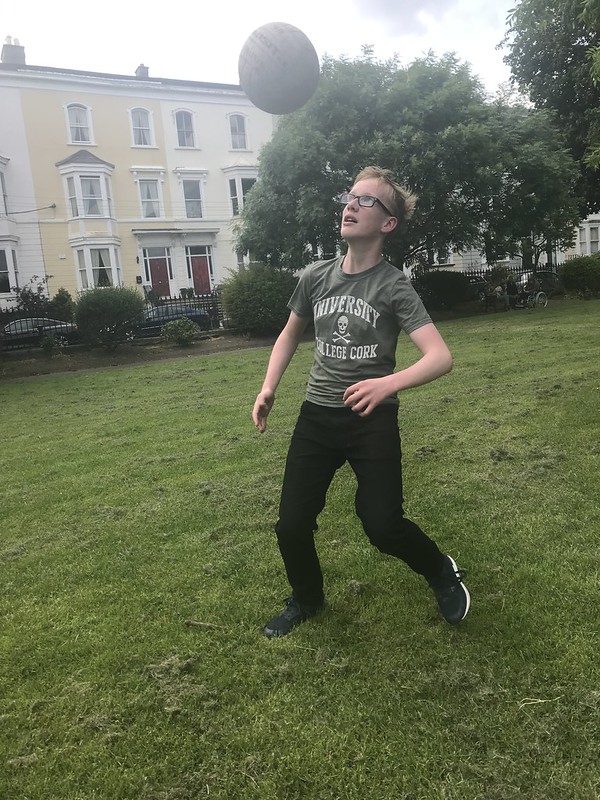 He likes playing board games and over the past year, he and his brother have had some friends (all male) back to the house on Friday afternoons to play long elaborate Dungeons and Dragons type things. 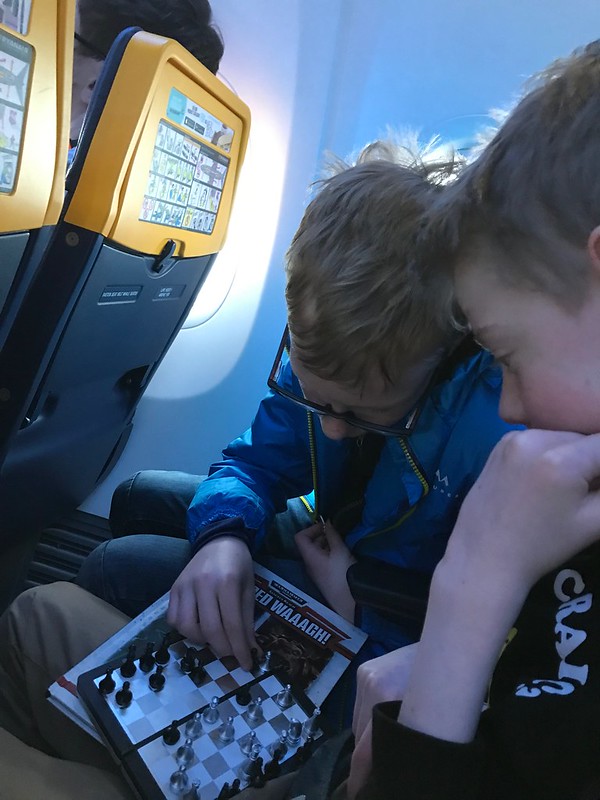 Sadly, he’s gone off reading – he reads the odd book and quite likes manga cartoons but I haven’t seen him really absorbed in a book all year despite my best efforts to find things that will catch his interest.

He loves his x-box. He is allowed to play on Saturday and Sunday mornings only to which he is resigned. He loves watching videos on youtube as well; in fairness, many of them quite worthy Ted talks but plenty of gamers as well. 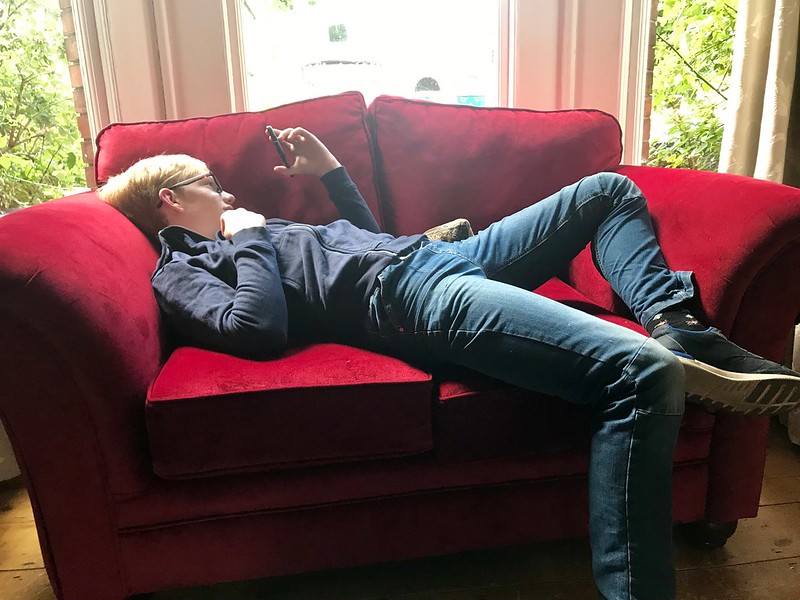 At school, he is doing pretty well and is popular with the teachers. He seems to have plenty of friends and does seem to be reasonably well settled in. This is quite a relief to me as he is the second youngest child in the year [his brother being the youngest] and he is quite a young 14 in some ways.

He’s a good public speaker with a lovely clear, deep reading voice. He never sounds at all nervous or breathless, even with big crowds, although he assures me he sometimes feels nervous. This will doubtless stand him in good stead in life. Mostly I hear him at mass on Sundays where he does the occasional reading and a regular prayer of the faithful. He is still in the church choir and though not quite the oldest, is definitely the tallest.

His French comprehension is still pretty good but his spoken French is only alright and his written French is not great. We have a French woman who comes once a week and talks to the three of them but this may not be sufficient to save his French. I have suggested that he might spend a couple of months in France in the next academic year, like his sister did last year but this has not been received by him with any degree of enthusiasm. In fairness, he did go to Paris and stay with my French friend’s family for a week and we had her son, N, back here. Both boys are pretty sporty and it worked well and was good for Dan’s French but it needs to be pretty constant. I might send him back to Paris for a bit next year anyhow, even if he can’t quite face a longer stay.

During the summer he did an academic course for children. His sister has done the same course for a number of years. We never heard anything about it from her but he gave us a blow by blow account. She had always studied things like “Law and Politics” and I was a bit surprised when Dan decided, very firmly, to go for engineering. The first couple of days, he found it a bit hard going but then he took to it like a duck to water and had a wonderful time and made some good friends.

Obviously spending three weeks studying engineering over the summer has been useful to his school work this year. He brought home a maths test the other day where he had got 96%. The test itself wasn’t particularly hard but I was struck by the neatness and economy of his answers. Every question was answered with the minimum number of steps and the responses were clearly and succinctly set out. He lost the 4% for failing to tot 16 and 9 correctly – what, you think I didn’t ask?

Notwithstanding his academic genius, he can be a bit disorganised. He has to bring home economics ingredients to school every second Wednesday and this always comes as a surprise to him, and to us, on Wednesday morning. I was awoken at 7.30 the other week by a nervous Daniel who said, “Mum, Mum, wake up, I’m too scared to tell Dad but I need to bring, lardons, butter and Pecorino to school for home ec.” I pulled some bacon out of the freezer and told him that Parmesan would have to do as cheese. “But E [his cookery partner] is bringing the Parmesan, I was supposed to bring another cheese,” he protested. I sent him off with Parmesan and cheddar and said that that would have to do. That evening, I asked him how it went, “Fine,” he said, “except we couldn’t thaw the bacon.” Terrifying. It’s far from Pecorino we were reared etc.

He gets on really well with his brother. He is regularly slightly mortified by his brother’s blithe disregard for convention but he has learnt to live with it. He often gives Michael a hug, if he is feeling sad. He and his sister continue to have a more difficult relationship; they drive each other crazy. She told me though, that she put up on her instagram a question, “Who do you admire most?” and he said her. She was quite touched. And he does admire her but he also finds her very annoying. 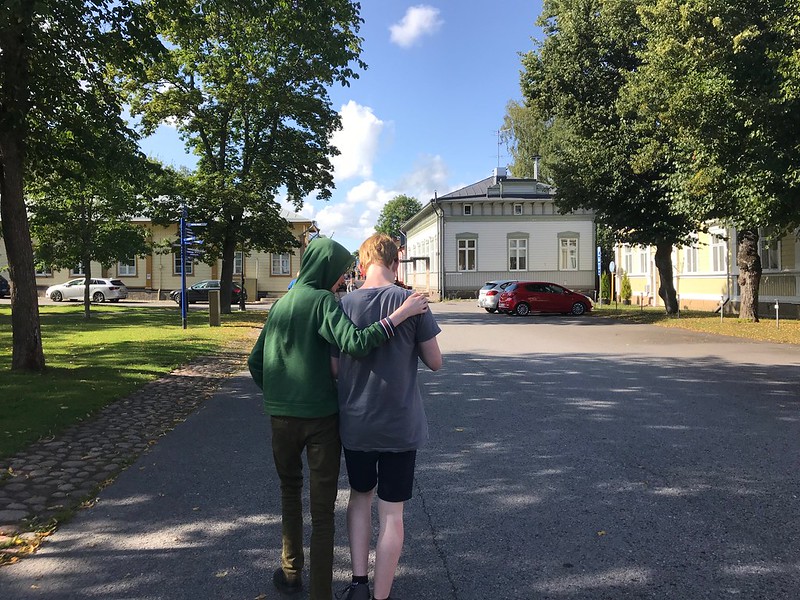 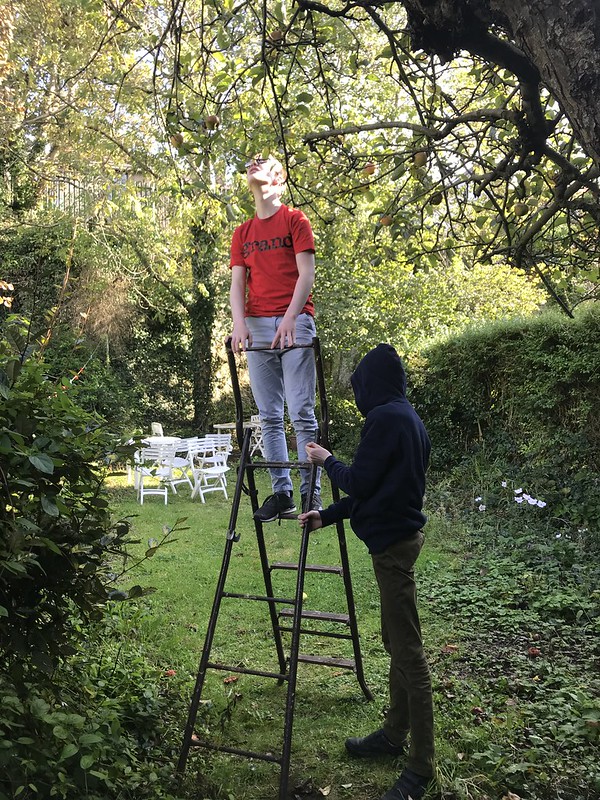 He is very fond of his little cousin S – 2 – and pretty patient with her. He is also fond of his cousins who are about the same age as him – 13 and 11 – and I do like to see them all together. When we went skiing earlier this year, one of the big things that made it a success for us is that we were there with the cousins. 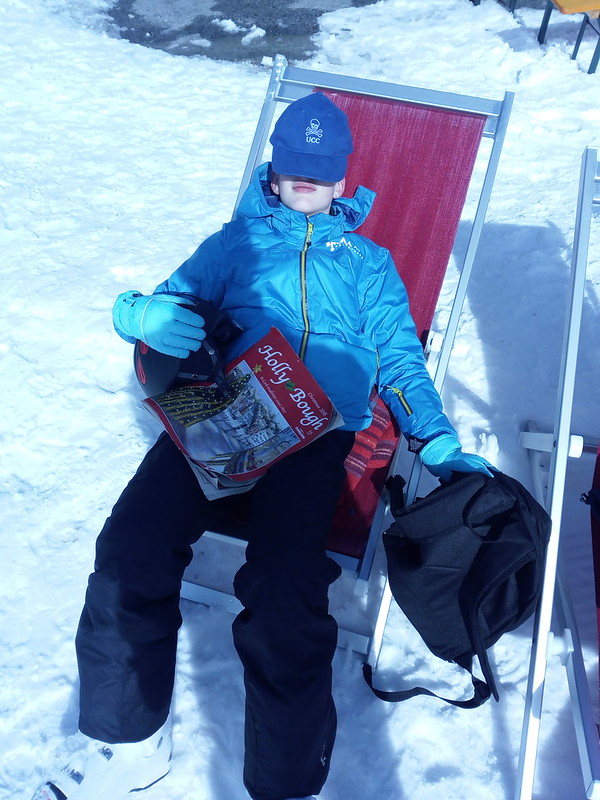 He has also grown very fond of the cat this year. He used to regard her with, at best, indifference but they seem to have bonded this year. 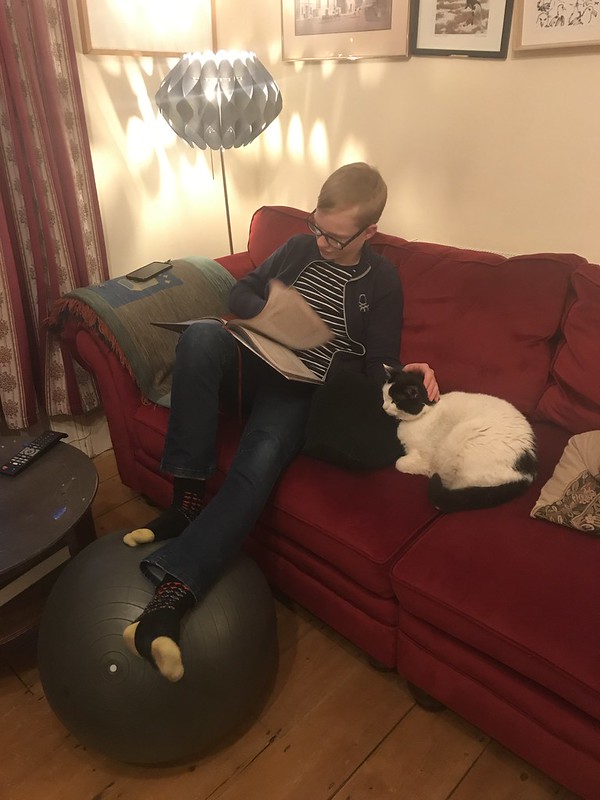 He has put a lot of effort into trying new foods over the past 12 months. I wouldn’t say that he eats a lot of different things, but he is trying and he has added some elements to his groups of permitted foods.

He used to get really annoyed and not be able to control his temper but he has got much, much better at this and now, he is pretty exemplary. He does get annoyed very occasionally and storm off to his room but really rarely. I have to say, I admire how hard he’s worked on this and how much he has improved.

Although, in general, he is not keen on my outings, he does like the theatre and although we only go a couple of times a year as a family, he seems to really enjoy those trips. Art galleries, not so much.

He’s good at doing things around the house and, if asked, will set to, if not with enthusiasm, at least with efficiency. 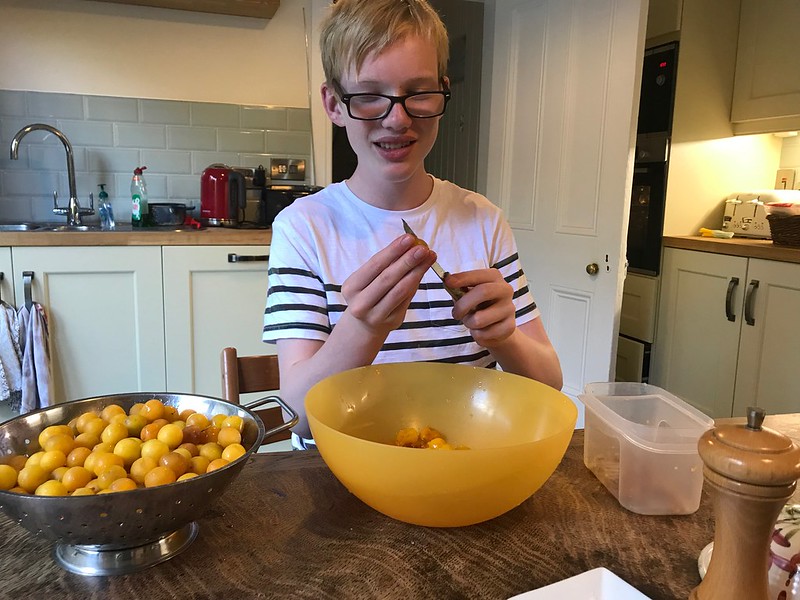 He can be very kind and obliging. On Friday night, I had to walk down to the supermarket to pick up some things and I wanted company. He volunteered to accompany me for what, let’s face it, was not the most exciting expedition, his siblings having quickly turned down the opportunity. We had a lovely chat and he carried the shopping home to boot. 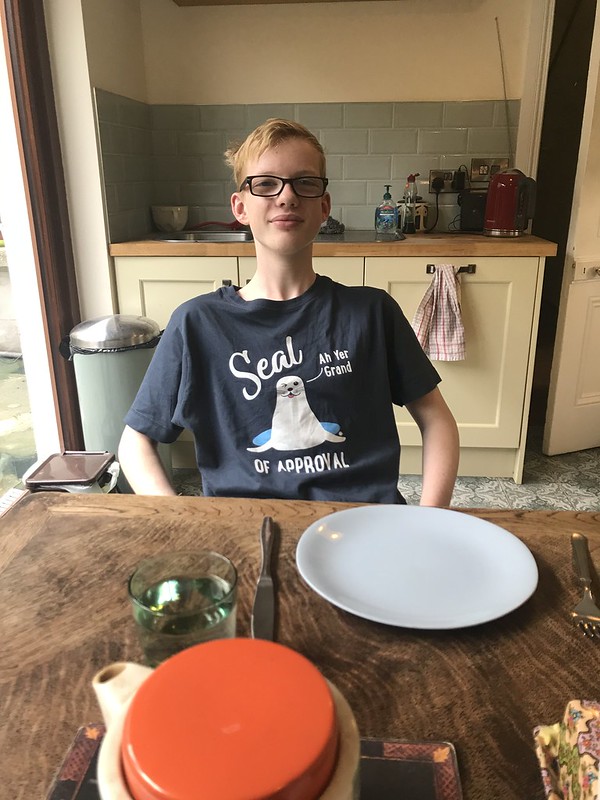