The cat somehow managed to hurt her nose. She may have got into a fight. Unclear. Mr. Waffle took her to the vet (which she did not enjoy) and the vet pronounced her to be basically fine and we should just wait and let her get better. €60 we will never see again. Sigh. Anyhow to skip to the finish, she did recover, but in the intervening fortnight she was unable to lick herself clean. Who knew a cat could become so revoltingly smelly. That licking behind the ears regime is startlingly effective.

Meanwhile, herself had another appointment with the medieval torturer who is passing himself off as an orthodontist. Honestly, if I had known at the start how much prolonged misery it would involve, I would never have started. I mean all she had was one little snaggle tooth (as our American cousins say) and it was actually quite cute and characterful. The orthodontist has now applied those dreadful elastic bands which are attached by hooks on the inside of her mouth. The pain, the poor child. She told me that the dental nurse said to her that she couldn’t go until she had put on the bands herself. It took her about 2 attempts. The dental nurse sighed and said, “It’s always the same, girls can do it straight away but boys take about 14 tries.” She speculated that it might be because girls look at themselves in the mirror more. It’s possible, I suppose. When she returned home, bloody, battered and elasticated, her brothers’ words of comfort were uncomforting. Daniel offered, “Now there is no food that you can’t readily turn into a catapult.” Michael said, “Isn’t it a good thing that I have perfect teeth?”

And in final tooth news, Daniel’s front tooth was declared dead by the dentist and he had his root canal treatment (€450 but cheap compared to the braces). Daniel said the procedure wasn’t too bad and he was quite cheerful during and after even though he had to lie there for a good hour with his mouth open. I took him for a bun afterwards and he ate it up with every appearance of enthusiasm. 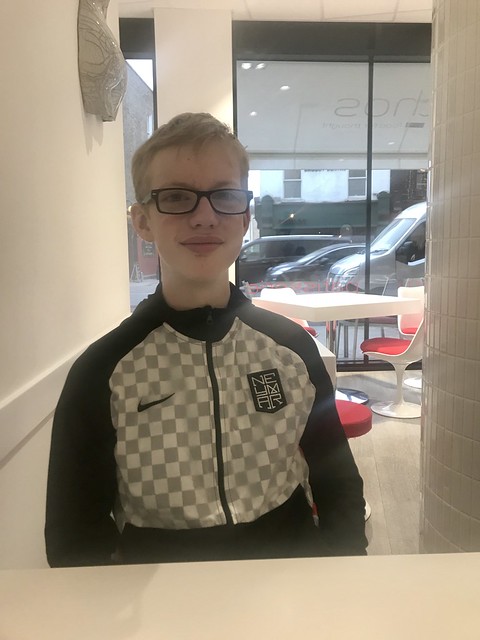 He then took himself off to GAA training that evening without a bother. All in all it appears to have been far less painful than his sister’s brace tightening which is something, I suppose. I have to go to the dentist for my regular check up next month. I’m not sure I can face any more mouth related trauma, so let’s hope it passes off peacefully.