I took myself off to mass for the first time in many months. I was greeted by this sign. Punctual worshipers only, it appears. 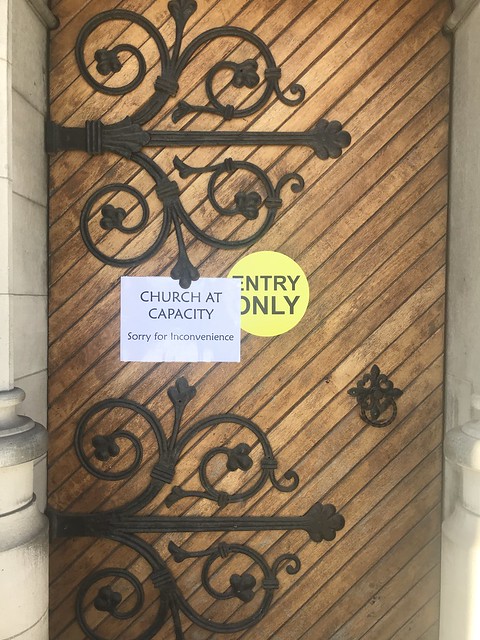 Daniel had his first GAA match since March. They were flattened, alas, but he was still delighted with himself.

Mr. Waffle and I cycled to the Bull Wall for a walk. A longer cycle than I anticipated. And it lashed rain on us. But I was sustained by a sense of inner smugness. Until I had to cycle home against the wind and into the rain. A low point was when I was cycling at maximum speed into the wind and Mr. Waffle hopped off and started walking beside me. 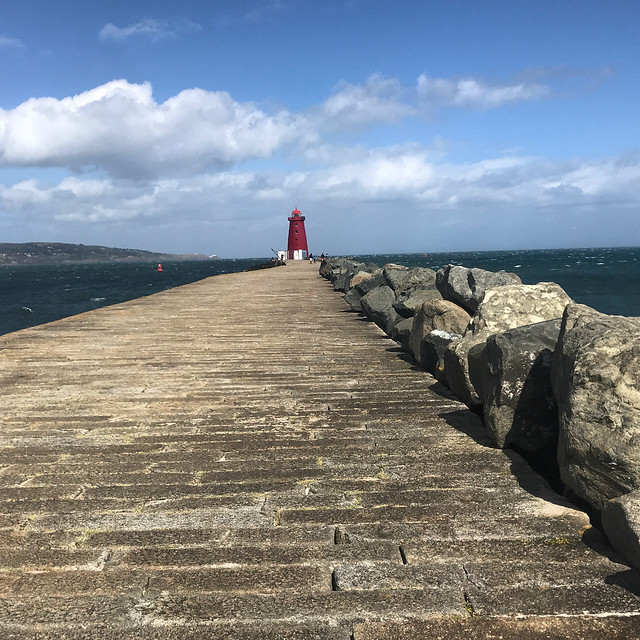 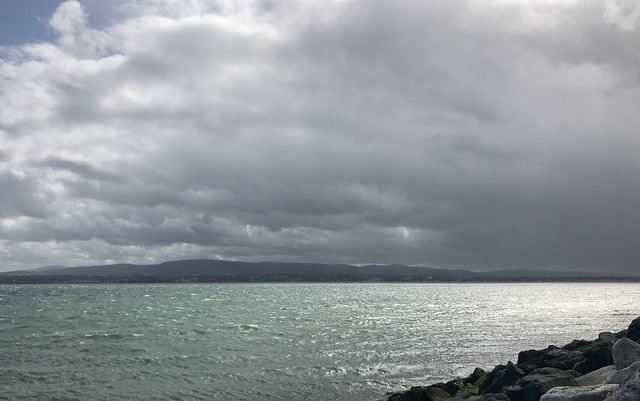 The beginning of a quite hideous week at work – now definitively full time back on site. On the plus side, I had lunch with a colleague in the park.

I was late home but as a treat, the council had laid on bollards at the end of the road. The excitement, I was absolutely delighted. Filtered permeability is the way of the future. I made my utterly uninterested children walk to the end of the road and inspect the temporary bollards (more like wands really). There was a bunch of men standing there looking bitterly at the bollards and as I re-screwed in one that had been taken out and thrown on an adjacent planter, I engaged them in conversation about the merits of filtered permeability. It would be fair to say that neither side was convinced by the arguments of the other but, in fairness, it was all reasonably good humoured (to clarify, I do not think they were the authors of the outrage that was the unscrewing of the bollard). Hilariously, they said it was no wonder that this kind of thing was happening as the CEO of Dublin city council was himself a cyclist. In my view, the cycling provision in Dublin wouldn’t exactly be a testament to that. In my mind’s eye, I see the roads division as stacked with engineers who live in the suburbs and want to turn the city centre into a motoring paradise as they don’t have to live there but that may be unfair.

Another trying day in the salt mines and it became clear that I wouldn’t be able to go on holidays on Friday morning and, worse, would have to travel back to Dublin on Monday for a meeting. I thought we might stay on a bit longer the following week to make up for it. I rang herself to see whether this created any difficulty for her social plans. I described my travel plans. “Fine by me,” she said, “but it sounds like the diary of a super-spreader.”

Speaking of super spreaders, I had lunch, in a cafe, with a friend. So gratifying. Herself went on the bus for the first time since March. Pretty empty she said.

She told me about her friend who said that he was contemplating reading the Bible as it’s such a best-seller.

Him: My parents have an old edition, about 20 years old in the house, do you think I could read that?

Him: Well, I was thinking that it might be quite offensive from today’s viewpoint and maybe a more modern updated version would be more appropriate.

It is an ongoing mystery to me how in a country where some 95% of primary schools are denominational, children and young people seem to have no idea whatsoever about religion. Even in general knowledge terms. Insert your own curmudgeonly joke here.

I was at my desk from 9 to 7.45 with a short break to buy a sandwich which I consumed at my desk. I was not delighted but on the plus side, the prospect of having to return on Monday for a meeting receded. There was much rejoicing on this latter front.

And then when I got home, Daniel had made pizza for dinner. Pleasing.

Herself got her braces tightened. Miserable.

The neighbourhood whatsapp group went crazy over the bollards. Entertaining.

Another delightful 12 hour work day. Note to file, never, ever, go on holidays in July again. It is not quiet, it is busy. Herself has developed a principle she’s tentatively calling the Polly principle (an homage to the Peter principle): “Responsibility devolves to the person available.” It’s definitely feeling true at the moment.

I got herself to order take away for dinner. When I got home I went out to join Mr. Waffle and our residents’ association chair to canvas people and encourage them to love the bollards. I was no use as they had seen everyone already by the time I caught up with them. Feeling on the doorsteps was broadly positive, I understand. All to play for, we have a four week trial to convince people.

When we thought we would be going to Cork on Friday, we moved film night to Thursday and it was too much mental effort to change back. We saw “Hot Fuzz” which wasn’t bad although, unbeknownst to Mr. Waffle, who chose it, the boys and I had seen it relatively recently.

When I finally left the office, late in the evening, the place was deserted and the bike access was locked. Who knew they would do that on a Friday? Not the person who normally takes a half day on Fridays. I was a bit reluctant to take public transport home as I had no face mask and Mr. Waffle was off with Dan at a GAA match and couldn’t give me a lift. I eventually managed to raise someone from security and got home about 9.30, tired but triumphant.

I got an email from the local Irish company (name not included to protect the guilty) from whom I ordered my face masks at great expense in mid–May that they would finally be delivered in the next 2 days, i.e. when no one would be in the house for the first time since March. However, I could not work up any significant levels of indignation as I was finally on holidays (even if, alas, my laptop was travelling with me).

Daniel arrived home from GAA with a sore wrist but we sent him to bed and hoped for the best.

Soon there will be a post on our week in Cork. There’s something to look forward to.