Although the plague feels much abated, I am still noting things every day. I’m not sure why but we’ll keep going and see when I run out of steam.

I am back to work in the office pretty much full time for July at least. The traffic was light on the cycle in which surprised me. There was hardly anyone in the office but one of my colleagues offered the frank appraisal that I looked pretty miserable. I suppose I was a bit. It was all strange and disorienting and it’s a different feeling to be going in to your office than downstairs to your desk.

I forgot my swipe card and spent some time trapped at reception but was rescued by a kindly security guard.

The creches have gone back today and, I have to say, I noticed the productivity boost immediately as colleagues are not limping along trying to mind children and work at the same time.

Last day working from home for a while. It felt a bit strange. Mr. Waffle got his hair cut to celebrate the barbers reopening. It was time.

Poor Daniel was very glum suffering from the boredom and inactivity which has been a huge part of his summer 2020 experience.

I cycled into the office in lashing rain and continue to adapt myself to this brave new world.

Mr. Waffle took Daniel out to visit his cousins and pick up a spare keyboard belonging to his uncle (immensely sophisticated yoke, Dan is delighted with it). Then he went back to real physical GAA training that evening in the lashing rain (both he and Mr. Waffle have done the return to GAA training post-covid course, no more spitting apparently, a delightful thought). He came back from training jubilant. Apparently between the daily runs and reps he’s actually never been fitter.

Herself meanwhile partook of more intellectual pleasures and went to visit Marsh’s Library with a friend. She sent us a picture of Queen Elizabeth I’s Irish primer. 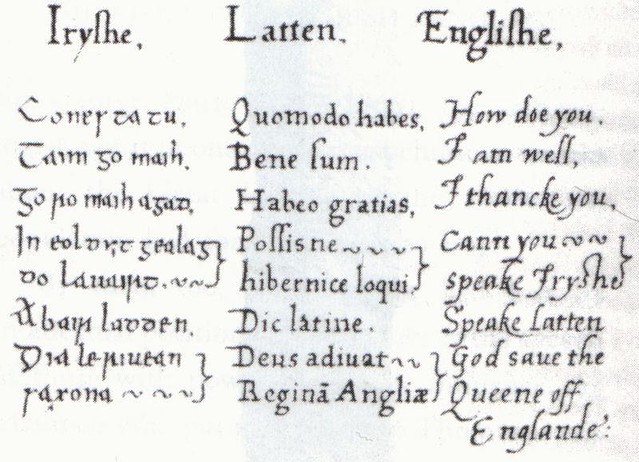 Michael remained at home all day rubbing his hands in delight at having the house to himself.

The boys got their hair cut. My menfolk are now all shorn which is, frankly, a welcome development. 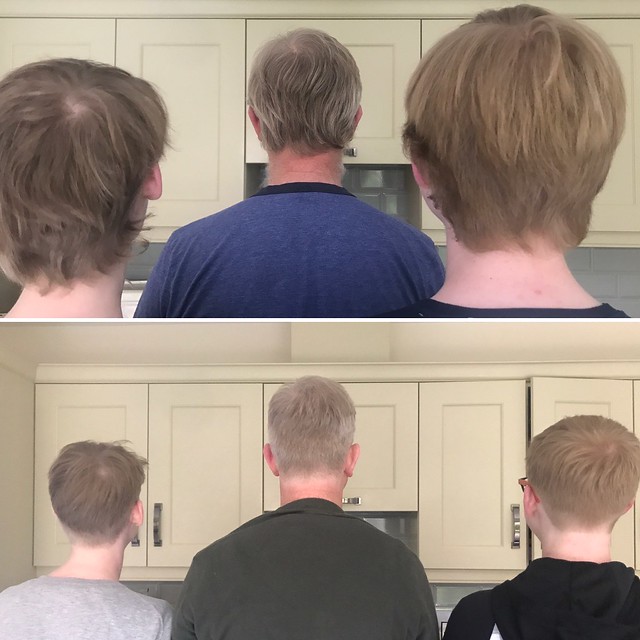 I’m getting used to being back at the office full time. It’s still pretty empty though. On the way home, there were loads of people outside the pubs drinking. I feel a bit nervous.

Herself went to the GP alone for the first time – she hurt her foot a couple of weeks ago and it was getting worse. Mr. Waffle was in an endless conference call and I was in my office so neither of us could go with her. She was quite pleased. They made an appointment for her to go for an x-ray.

I finally finished book 7 of the Harry Potter audiobooks. Go on, judge away. Listening to them all via Borrowbox (excellent library app which allows you to download audiobooks and e-books for borrowing purposes) has been my pandemic soundtrack. A bit of a marathon.

Everyone else in the family has become obsessed with flags. I know it’s anti-intellectual but this is not an area of learning in which I can muster any interest. I know I’m always saying to the children that anything can be interesting if you learn about it but, personally, I seem to be hitting a brick wall on this one. Here’s what the family whatsapp group looks like these days. 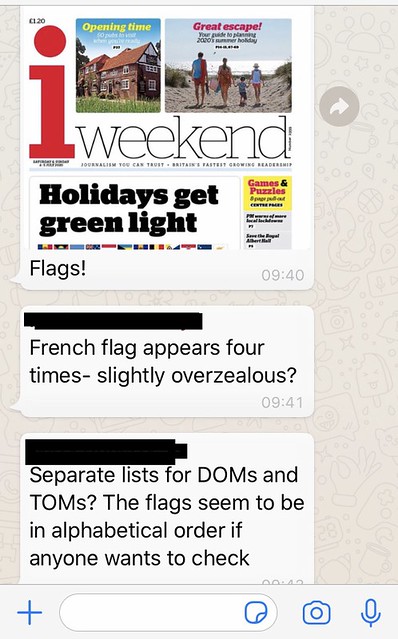 This is the end of civility: we got an email from facilities management asking us not to hold the door open for each other. Understandable, I suppose. I managed to tear myself away from the office by 3. This half day on Friday is so often observed in the breach that I wonder whether I should give it up altogether and go back to full time working.

Herself went for her x-ray and they diagnosed a torn ligament and gave her a compression sock thing. She had to cycle to and from the appointment as her parents have really taken to this new regime where she deals with her own medical appointments.

Dr. Tony Holohan, the CMO who has been guiding the nation through the corona virus thing has stepped back. Never has a nation loved a public servant more. His wife has cancer and is going into palliative care and he is going to look after her and their two teenagers. How grim. In early March, someone from Limerick (background – Dr. Holohan is from Limerick) said to me that she thought his wife had terminal cancer. I never heard anything further about it in the media or anywhere else and I thought that my Limerick source was wrong but in fact she was right. Loads of people must have known and I find it reassuring that in a tiny country like this, people respected his privacy and, as far as I know, not a word got out publicly until he decided to tell people himself.

For cinema night we had “Red”. A comedy action movie about a former CIA agent – Bruce Willis – who is being hunted by the CIA. The plot is complex – I suspect more than one screen writer had a hand in it. It was enjoyable in places but I was pleased that all of my children were well able to identify the misogynistic tropes which it included – for example, good guy kidnaps the girl and she falls in love with him. I think we can all acknowledge that kidnap is not the path to a loving relationship founded on mutual respect.

One of the neighbours has opened up a fancy coffee van. We went to buy pastries. On the way we inspected the new road layout to facilitate temporary bollards at the end of the road. Saturday morning thrills. Am I turning into Mr. Pooter here? Please, no replies.

Michael and I went into town and went to an art gallery (for me) and various game shops (for him) and had pizza. It was the most normal set of Saturday activities in ages. I also made him have a go on an electric bicycle. He didn’t love it. 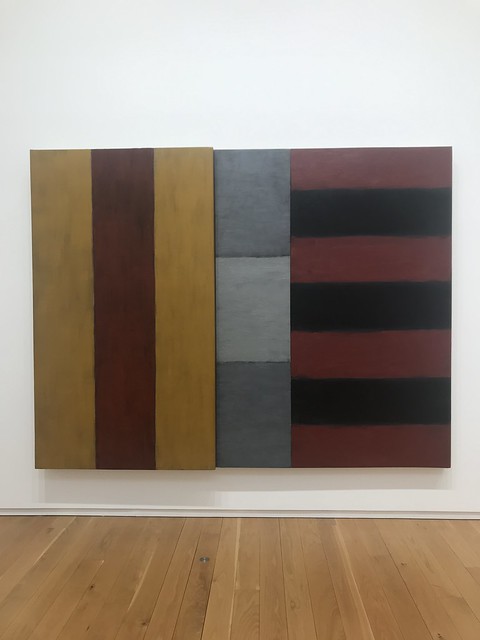 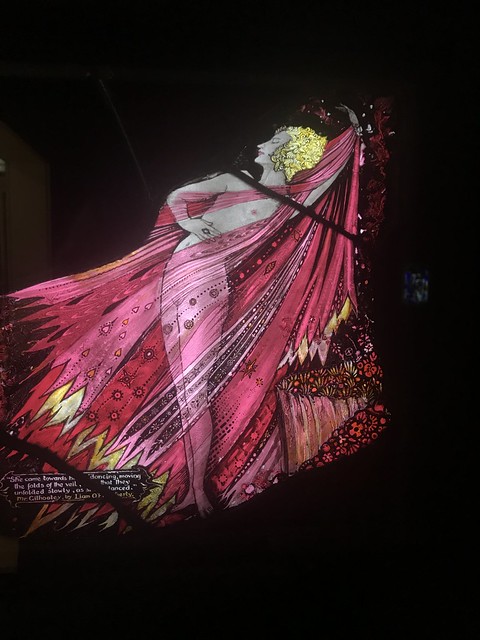 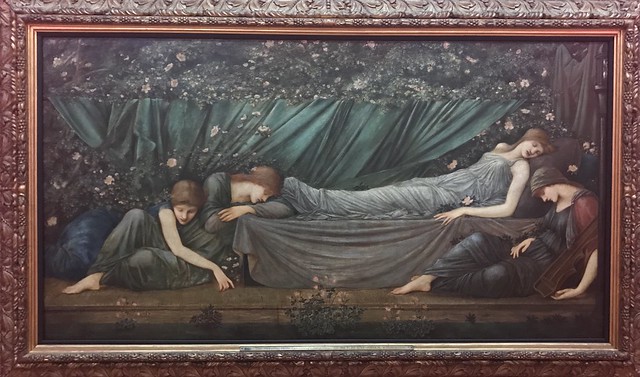 We booked the rest of our summer holiday in Ireland. Hallelujah.

Daniel’s friend called to see if he would like to go on a basketball course. He would. When is it? One of the weeks we are away. Of course.