Herself was 17 on April 12 so this is, even by my standards, a particularly belated birthday post. Look, there’s a pandemic on. I understand from a friend of my father’s now, unhappily, deceased that during the second world war when Ireland was neutral but in a state of emergency, known as “the emergency”, it was used an excuse for all sorts of unrelated delays and problems: “Don’t you know there’s an emergency?” I cannot imagine why that might have sprung to mind. 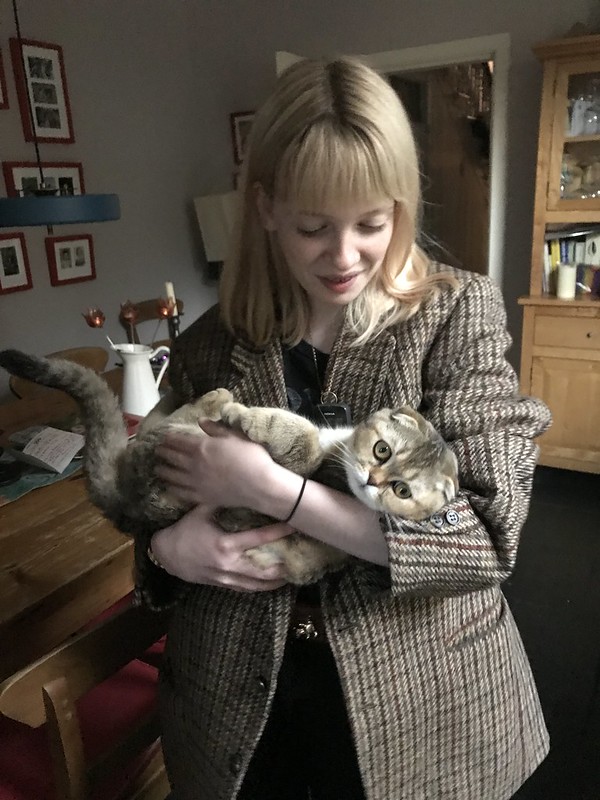 So she still has her braces. The pandemic may put back their removal. She is, understandably, very bitter. She still has a gap between her front teeth but otherwise they look perfectly straight and even underneath their metal shield. Of course, she didn’t have a gap between her front teeth when she started the treatment so we will all be pretty annoyed if the orthodontist cannot make it go away. 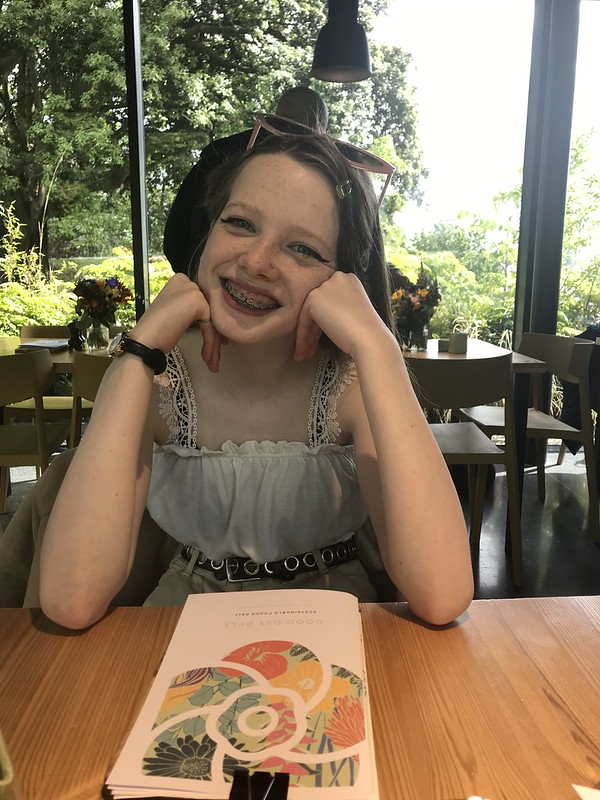 She had a good fourth year in school with a starring role in the transition year musical and then her school summer trip to Zambia. Fifth year in school was going fine too until the pandemic cut her academic year short. She has a full social life and lots of friends. While she is still on a lot of committees, some of the committee attendance has been replaced by going to concerts. I feel a little ambivalent about that. The committees seemed much safer.

She is still a vegetarian and recently confided to me that she is a vegan outside the home but is not vegan at home as she knows it would tip me over the edge. This is an entirely correct assessment. I am not the world’s best cook and nor am I much good at remembering to make a vegetarian option. I often end up heating up something frozen at the last minute. Hence her regularly repeated mournful refrain: “The vegetarian always eats last”. As she is now (finally) taller than me, my oft repeated concern that being a vegetarian might stunt her growth is ever less convincing.

This last year, she dipped a toe in enterprise setting up a little online shop to sell her clothes second hand. She found it all a lot of work and the returns poor. That’s a valuable lesson right there, I suppose. Babysitting for her little cousin was, I think, more lucrative until, sadly, her cousin, uncle and aunt all moved back to London. 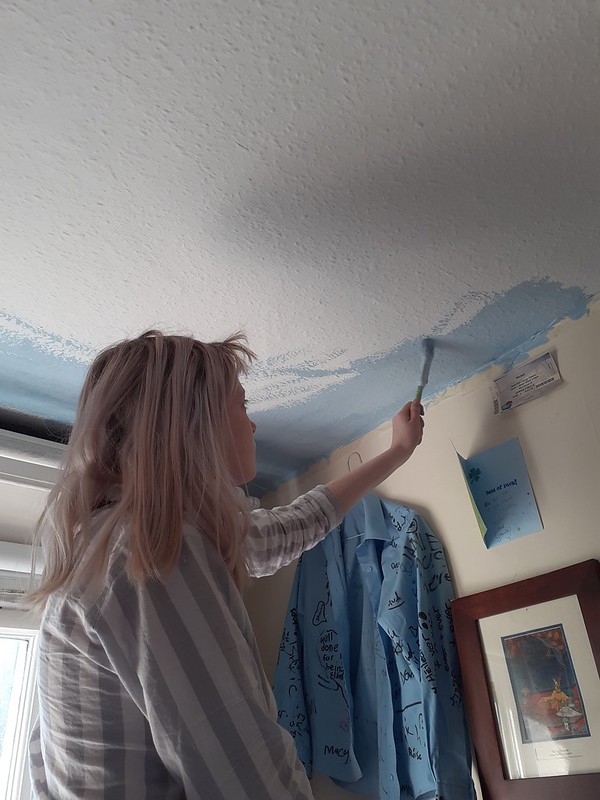 We haven’t seen her natural hair colour in some years. Much of 16 she spent as a white blonde but she’s grown much of it out in the pandemic. Exciting. 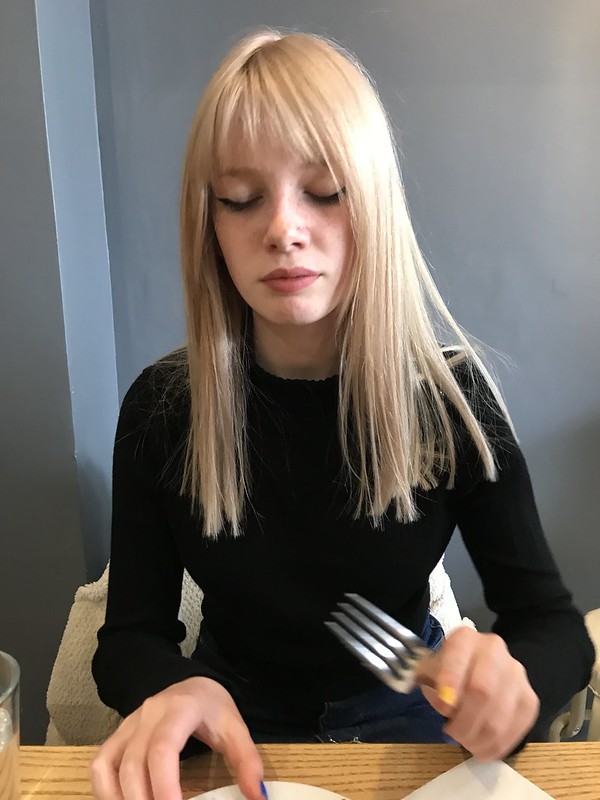 In the past year, I notice she’s more inclined to take her bike when she’s going in to town to meet people. While at one level, I rejoice, I always worry that she will be run over. 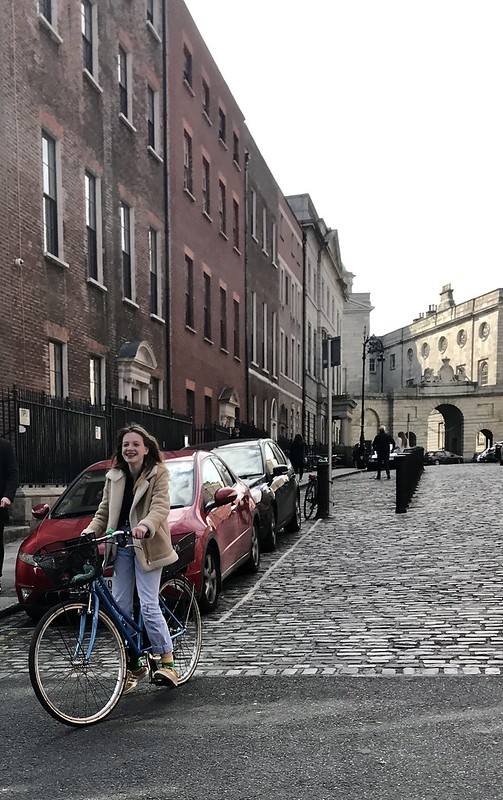 She is still not sporty and, I suppose that this is unlikely to change very much at this stage. She does love swimming in the sea though. 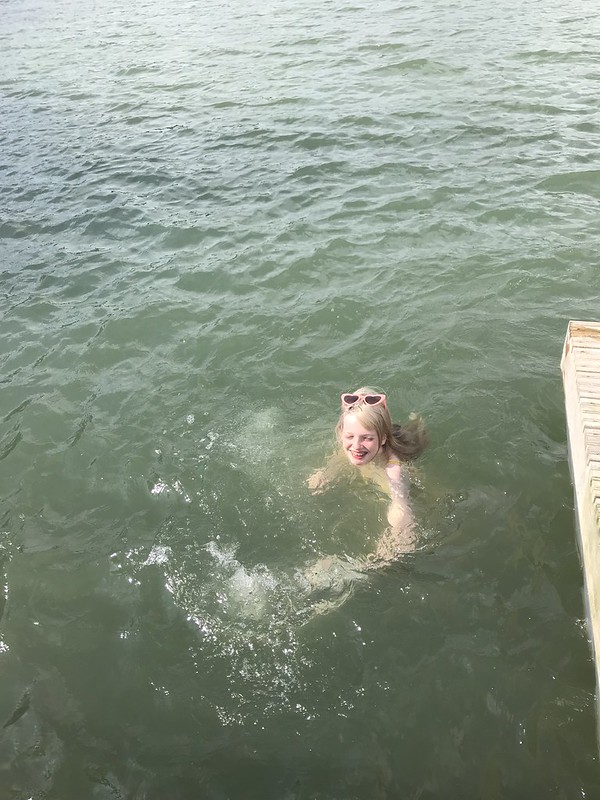 She is only two and a half years older than her brothers but sometimes she feels a lot older. She’s a bit old for her age, they’re a bit young. They view all her utterances as gospel and if she is a bit snarky to them, they are very cast down. She doesn’t realise her own power and sometimes they drive her crazy but mostly she regards them with mild fondness. 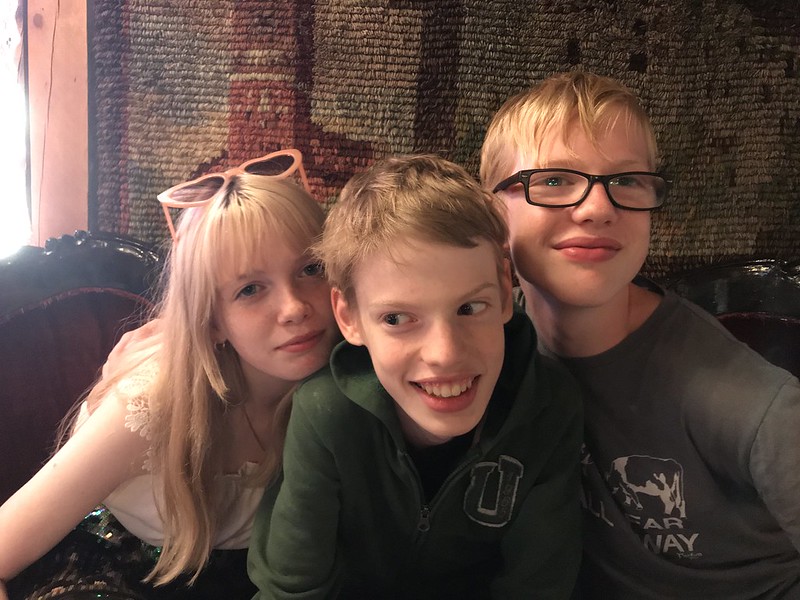 It sometimes feels that they don’t have a lot in common other than school. While she has always been very resistant to revealing any information, the boys tell us things about school and she regards them as fifth columnists. 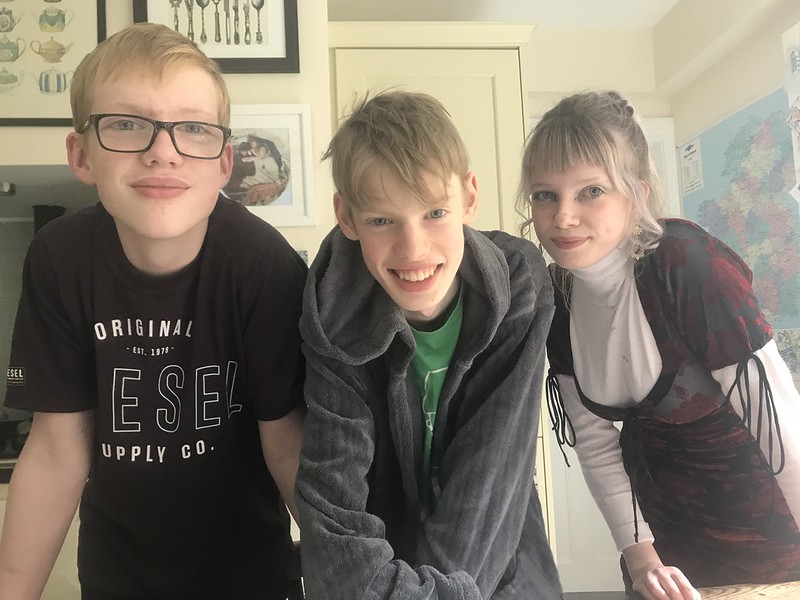 Academically, she continues to do well. She’s hardworking, bright and genuinely naturally interested in the kind of things that might lead to you doing well in exams. For example at this moment she is reading a biography of the poet Louis MacNeice which she picked up for herself in a second hand bookshop. Is he on her course? Nope, just interested.

While she was in Zambia, my mother died. I think it was probably worse for me than for her that she was away, but it was no picnic for either of us. 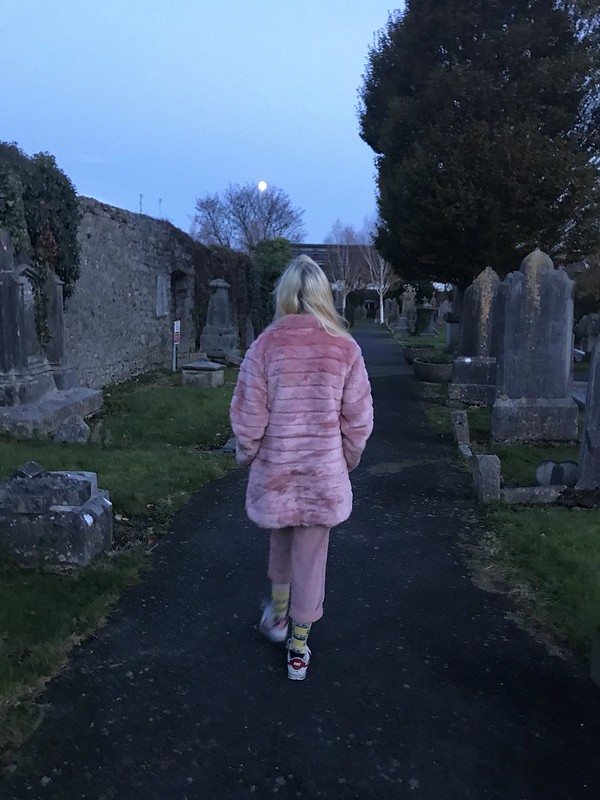 She was in a short film for the Dublin film festival and her face was on the (virtual) poster. I was extremely excited; much more so than my ultra cool child. We saw the film just before lockdown – it was fine, possibly a bit arty for me but, you know, featuring my first born.

She is quite cool. She is always wearing exciting and unusual outfits which are generally successful. She’s really interested in fashion. I have no idea where this came from. The greatest compliment which you can pay her is to ask whether she is a student at the National College of Art and Design. 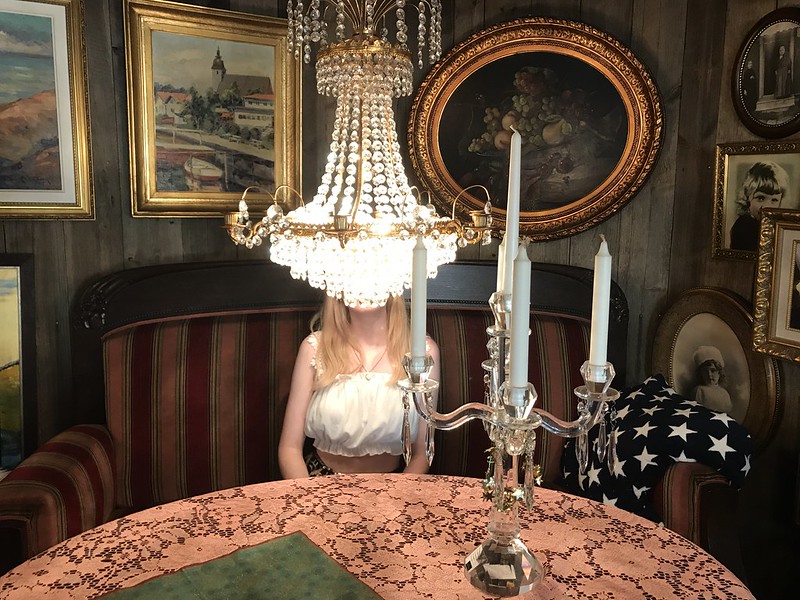 She took some of my mother’s old clothes after she died and re-purposed them. I love seeing her wearing them. Firstly, because they remind me of my mother and secondly because my mother was a big believer in hand-me-downs and would be delighted to see clothes she paid good money for getting another lease of life. 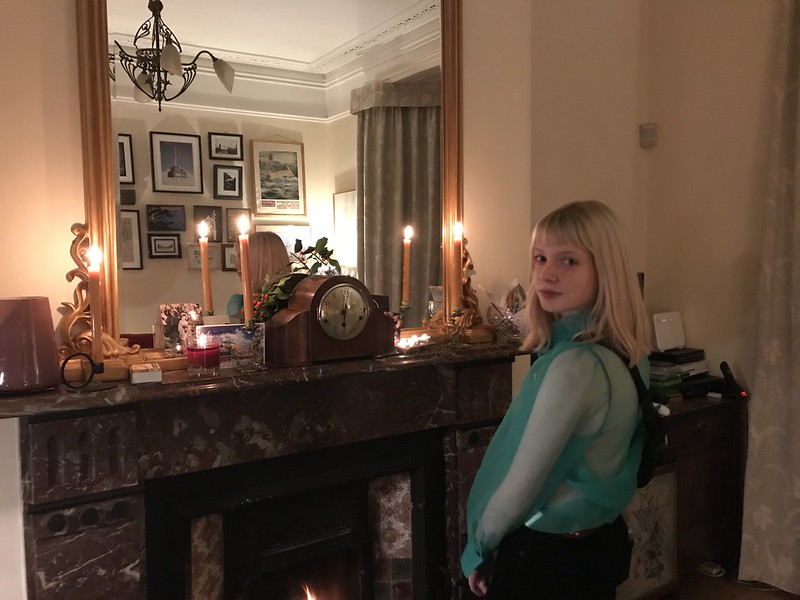 She is very interested in politics and social movements. On her Friday half day she used to go off and march for climate change; in fact she is an inveterate marcher for all kinds of causes. She follows all our local politicians on twitter and knows their views. She had a long old chat with one of the general election candidates on the door step earlier this year about his views on penal reform.

Last summer (2019) she went, for the last time, to this three week residential summer course she has been doing for years. She always loved it and made loads of good friends and I was keen that she should do it again this year but she said that no, she was ready to conclude that chapter of her life. That proved a pretty prescient choice. 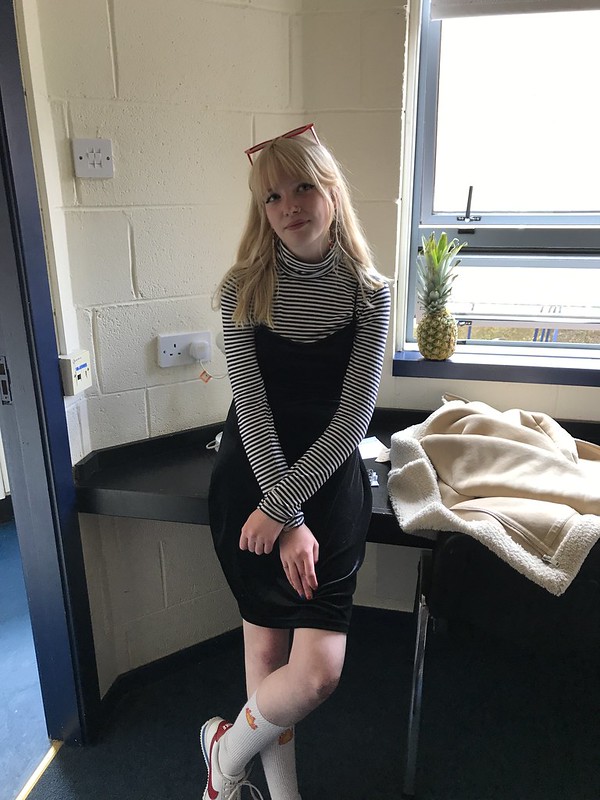 Increasingly, living with her feels like living with an adult. I find her endlessly charming and entertaining. While I wouldn’t say we never argue, these occasions are becoming rarer and rarer. Her independence and self-sufficiency which were a worry when she was younger and constantly pushing boundaries are now great as she is very smart and street savvy and has a good sense of what is safe and what might not be. As she stands on the threshold of adulthood, I am very proud of her. Honestly, she’s a delight.