It was the last day of my holidays. Mr. Waffle and I went out for breakfast. Our regular handyman came to the house to do various small jobs (he has finally accepted that our DIY capacities are rock bottom). I discovered the hard way that our local library now closes at 4. Herself is a bit gloomy about teenage parties she has dutifully not gone to but pictures of which fill her social media feeds.

Back to work for a half day. The advantage of working while on holidays is, I suppose, that the inbox isn’t too overwhelming on return. Scant comfort really. Mr. Waffle and I went out to a local cafe for a cup of tea and the waitress said, “Didn’t you used to go to the Pain Quotidien in town? I remember you because of the Earl Grey.” Sadly, it appears that the Dublin PQ has closed permanently. I have to tell you this is not the first time I have been recognised by someone in a cafe in these circumstances. I think I am known as “Earl Grey” lady all over Dublin.

We had our first cinema night in a while and Daniel chose “Coach Carter” which I would never have watched otherwise but we all found quite enjoyable. I think cinema night might survive even when Covid ends.

Much of the day was spent in a vain hunt for grey school trousers for a child who is both tall and very skinny. Then we were going to a friend’s house for dinner but she got a cold and on the better safe than sorry principle she suggested that we put it back a week in case it was the dreaded Covid. Alas.

I had an almost normal afternoon in town. I went to the shops, I had a wander round the art gallery. It was quite lovely.

The full immersive return to work experience. Could have been worse, I suppose.

The applied maths teacher has got a job in Galway. Herself was doing it outside school so it’s a bit hard to see how we are going to find someone else to deliver the course to her in Irish. The teacher called the students and said that he doesn’t want to leave them in the lurch so promised to drive up from Galway every weekend so that he can cover the course with her and the three other students who are doing it outside school. Which is pretty decent but I wonder will it be feasible?

We got news from the school that one of the children’s teachers had died. We were all a bit shocked. She hadn’t been unwell as far as we knew. She was about 60 I’d say and a big smoker so I do wonder whether it might have been Covid. No one can go to the funeral, of course.

There was a picture in the paper of first years in school with masks with the school crest on them. It felt a bit dystopian and I was pretty gloomy. Herself was concerned that her own school might follow them on the uniform/mask front as she has some pretty exciting masks that she is keen to try out in school which she believes that, based on current policy, the uniform police will be powerless to resist. 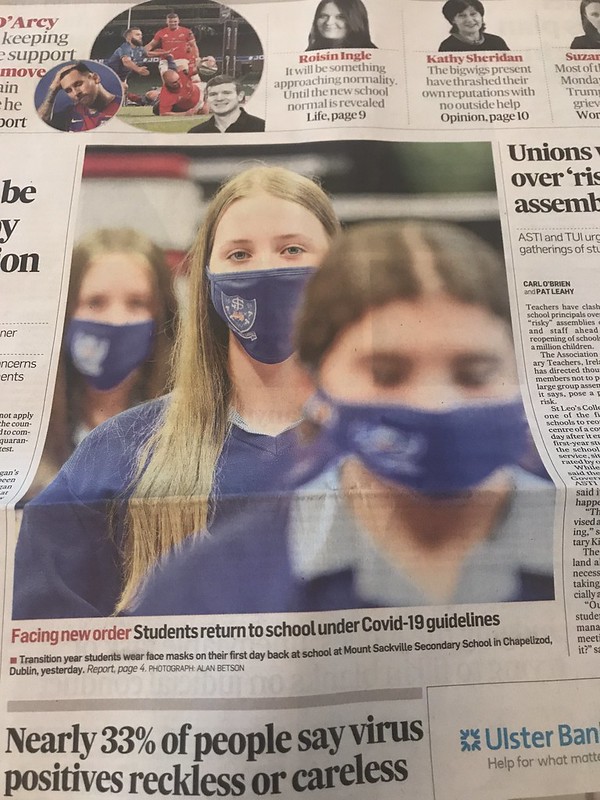 And this back to school kit in the window of the chemist’s is a bit miserable as well. 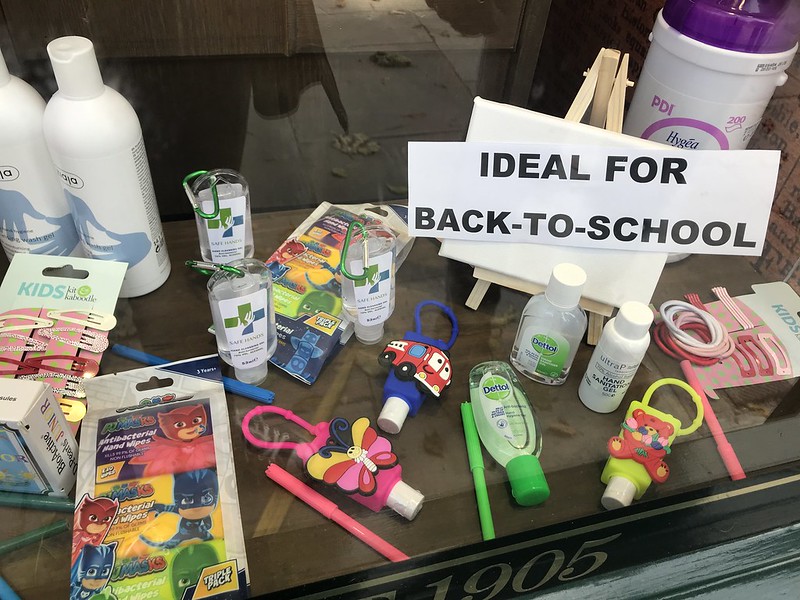 And then the latest road map is a bit off-putting. 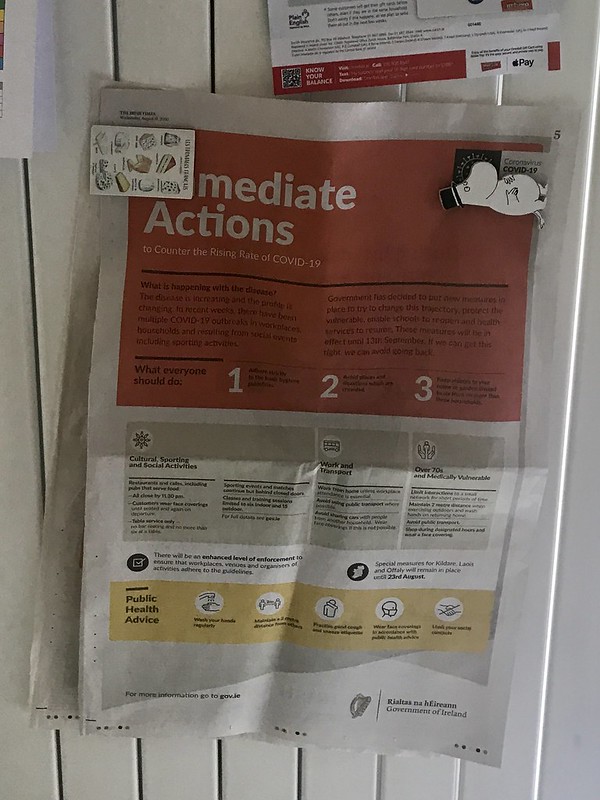 Still on the plus side, I visited the Asia Market (enormous place on Drury Street cunningly concealed by falsely tiny looking shop front) which I found full of interesting if baffling produce and herself made dinner again.

The children were all going back to the primary school at the end of the road. It was lovely to see them heading in on their flotilla of bikes and scooters.

Mr. Waffle mentioned to our butcher that he had seen a Northern Irish van with his name on it and was it any relation? It was his first cousin who has a butcher’s shop in Portrush. Our own butcher’s father was from Derry and his mother from the Glens of Antrim. He was born in Derry but they moved down south when he was three. Fancy that.

Michael’s school trousers which I had ordered online arrived. A perfect fit but black instead of regulation gray. Weeping and gnashing of teeth.

God, I was soaked on the cycle into work. I squelched around the building with wet feet all morning. I was on the phone to a colleague and we spent about 2 minutes dealing with a work issue and a further 20 moaning about how grim it all is. He won because he lives in Kildare and is still in lock down with his two primary age children.

I’ve been re-reading a great diary anthology this year. A lot of the diaries are from World War II and as you read them you can see how heavily it weighs on people that they have no idea how or when it will end. As a modern reader you’re thinking, June 1943, only two years to go but they have no idea. It’s strange to me writing this to find myself in a slightly similar situation with Covid – not knowing when or if it will end and finding that pretty wearing.

I returned Michael’s trousers to Marks and Spencer but none in his size available in the shop or online or in Dunnes. The school authorities will kill us if we can’t unearth a pair. Finally got trousers in a specialist uniform shop. They should be made from raw silk at the cost of them. They are not.

The school has made changes to the uniform this year and herself has complained about this quite a bit. She tried it on for us to inspect. Her complaints are warranted. It’s awful. Only one more year, I suppose.

Michael chose the remake of “Total Recall” for cinema night. Poor Michael, it was our first total dud. Quite dreadful.

I spent most of the afternoon taming the garden as a kind of displacement activity. I did not complete the work task I had set myself. Alas. The garden looks amazing though.

Mr. Waffle and I went out to dinner to a friend’s house. Very thrilling and most enjoyable.

We had the cousins over. We were able to sit in my newly hacked back garden. Time well spent.