It lashed rain. Except for Mr. Waffle, we were all back at school and work – not virtually but really. It was not the weather for a real commute but we were all pretty glad to be back except Michael who is not one bit glad, not even slightly glad and pines for lockdown.

There were some teething problems with the boys’ new bikes. They could not keep their school bags on their new carriers. I went and attached them using my superior skills but they informed me bitterly that evening that they came off and fell into the puddles, if anything, even faster than when they had attached them by themselves. Further work required.

There was heady excitement about the filtered permeability (or bollards) at the end of the road which local councillors were to vote on. I honestly don’t know when there has been more interest in a traffic calming measure. You will be delighted to hear that councillors voted to extend the trial to end January. Yes, I know, you’re fascinated.

My sister sent the children presents to celebrate their return to school. Great excitement. 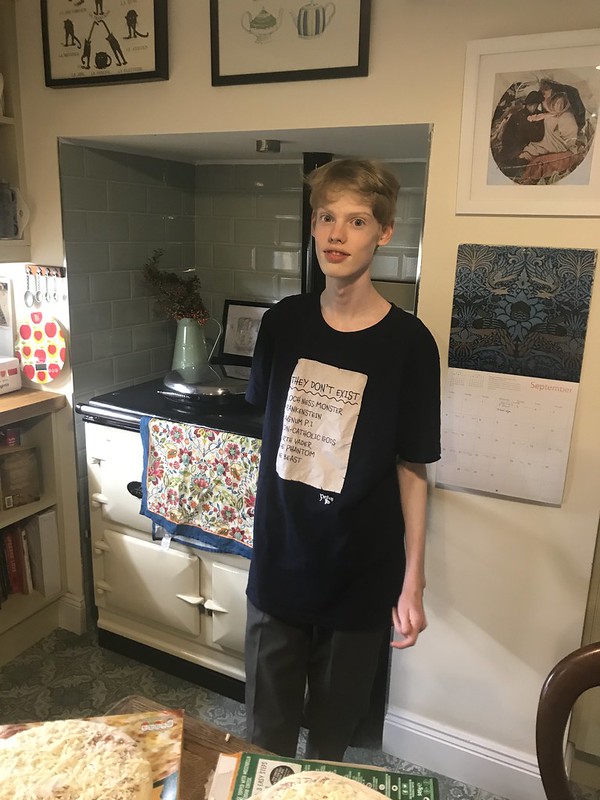 I made apple chutney. Less excitement. Mr. Waffle seriously endangered our marriage by going out and buying four apples. I nearly had a fit. He now knows, that if he wants an apple he should get up a ladder and pick one, I’m not even making him eat windfalls.

We discovered that Michael had no runners. I could wish that he had told us this before 8 in the morning on the day he was going to an adventure centre. He took mine. I’m not bitter.

I met a friend for lunch in town – v thrilling indeed. Slowly things are returning to normal. Rejoice.

I picked some more apples – literally the low-hanging fruit. When will the apple harvest end? The boys did a thing that sounded like some kind of away day management exercise at school. They absolutely loved it; its the most enthusiastic I’ve ever seen them both after a day at school. When Transition Year works, it’s really good.

Yet again, I arrived at the library doors 3 minutes before closing and, yet again, I was denied entry to paradise. Yes, there’s a message there. I dropped an enormous jar of very hot apple jelly on the kitchen floor and spent the next hour mopping and picking up broken glass and it was still sticky underfoot for days. Sigh. For cinema night, we watched “Fire Saga” which wasn’t bad but would have been better if the children had ever seen the Eurovision Song Contest.

I got an early train to Cork. It was a beautiful morning when I arrived. It’s hard to think of anywhere nicer than Cork in sunshine. I stopped off at the Crawford gallery on the way to my parents’ house. Not one but two friends sent me this link while I was actually in the gallery. Hard to know what to say. We intellectuals are often got at.

I see that the gallery has a new acquisition, a picture which appears in another picture – one of my favourite things. I saw everyone in the family, my 95 year old father, my 91 year old aunt, my brother and my sister and prayed that I was not infecting them with stray germs from Covid-ridden Dublin. In my further family history explorations, I discovered that growing up my father and aunt had a terrier called Sandy whom my father cordially loathed, apparently Sandy was very nippy and it was a rush to close the gate so that the postman could get out with his ankles intact. This may explain why he was never open to getting a family dog. His father died when he was very young and he didn’t seem much of his father’s family afterwards but he asked me to check the census to see whether he had had an aunt Nan. He had. He said that he remembered her crying as she sewed black diamonds on to the men’s sleeves when his grandfather (his father’s father) died. He also said that Uncle Jack his father’s brother was very good at maths and used to give grinds. Those good at maths genes passed down to my father but skipped neatly over me and on to herself who also really enjoys maths.

A mad dash for the train which I just about made. It turns out you can cycle from my parents’ house to the station in 20 minutes but I wouldn’t recommend it.

I got home and found that the apple jelly had failed to set. Typical.

I had another lunch out. Let joy be unconfined.

Lunch out again. I’m on a roll here. We discover that Michael does not in fact love working in a charity shop on Wednesday afternoons for Transition Year. Daniel continues keen though, so there’s that.

Apple stocks are at crisis levels and there are still three trees full of apples out the back. When I was growing up, my parents had 11 or 12 apple trees in the back gardens which were a magnet for local children who would come in and steal them much to my father’s chagrin – I remember him running out to the garden in fury and children scattering at speed. On one memorable occasion, a classmate was telling me about a great place for “slogging apples”. The expression was new to me but the meaning was clear. On investigation it turned out to be my garden which left me feeling a little awkward but she was charmed by the discovery. Frankly, at this stage I would welcome an apple slogger.

Dublin is on Level 2+ of the new national Covid plan and I reflect guiltily on my lunches out.

Daniel is doing this course on Thursdays during Transition Year – it’s a university level taster thing. Did he know anyone on the course? Yes, Ben who he met on a summer science course a couple of years ago. They are like debutantes, these middle class children – they keep meeting the same people on the circuit.

A friend I met for lunch posted me some masks made by her 15 year old daughter. They are amazing – v. impressively constructed. Herself instantly nicked them both. I’ve ordered a couple of more as I think masks are going to be with us for the long haul.

We get an email from the principal saying that there is a confirmed Covid case in the school. Not a surprise but not exactly welcome news either.

With the greatest difficulty I acquire an Irish textbook for Michael from the Irish language bookshop in town which was closed but opened its doors to me when I tapped on the window. I was justifiably proud.

Mr. Waffle and I go out for a last lunch before lockdown. We also picked up a couple of pictures of herself I had dropped in for framing – dear but worth it. I make more jelly. It sets. What will I do with it all? I had been going to visit a friend of my mother’s over the weekend but she says perhaps better not. To nobody’s surprise, Dublin moves to level 3 – cafes and pubs closed with only outside eating, no travelling outside the county. We probably need a bigger radiator. This was culture night and we normally go out but not this year, alas. We watched “Being John Malkovich” for film night and it remains one of the oddest films I’ve ever seen in my life.

Mr. Waffle and I were due to go on a weekend away for the weekend in April (in Northern Ireland) and we had to cancel and replaced it with a trip in October. I very much fear we won’t be able to go in October either. Oh well. Worse things happen at sea.

I had to take herself into town to a course so had a wander around. It wasn’t as quiet as I expected now that we are in Level 3 but it wasn’t buzzing either.

We all worked on tidying up the garden (except herself who was swotting for a physics exam on Monday) – it was effective but a bit dull. As was a trip to the tile shop to talk about the bathroom renovation. Welcome to middle age, I suppose.

In a potential game changer development, my sister tells me that apple jelly is the base for mint jelly – just add mint.

Mr. Waffle, the boys and I played a bit of tennis.

I feel in general much was achieved this weekend, but I have had more fun weekends.

You may or may not have noticed that I have been diarying every day since the start of Covid. I just want to have some idea what on earth I am doing in this weird period when everything seems slightly the same. Feel free to look away at any stage.