Mr. Waffle and I are both facing into slightly grisly weeks at work on the basis that we are going on holidays on Friday never to return. Alas, that is not true but I am off for 3 and a bit weeks and Mr. Waffle is off until September. Rejoice. Just the week of doom to get through first.

The plumber arrives with his son to do up the bathroom. This was originally scheduled for last October but Covid did not permit. The plumber is keen as mustard. He arrives at 7.30 and says that he will be finished by Friday. He proceeds to cut off the water for the day. Herself is not delighted but at least the boys are safely in Cork.

Indoor dining can resume for the lucky vaccinated.

Herself enjoys another day at home with the plumber and his son and no water.

When we returned home that evening she told us that she had overheard the plumber on the phone with a client: “Look,” said he, “I’ve tried to explain to you and I’ve explained to your husband; to put it in terms you can understand, your heating system is fucked.” On seeing my precious firstborn, he said, “Sorry, I forgot you were there.” Indeed.

I had my first indoor dining experience with my Covid cert at lunch time. It was grand. Worked fine.

Daniel and Michael returned to the fold. They were not delighted by the upstairs bathroom situation but who would be? They had an excellent time in Cork with absolutely beautiful weather.

This was our 20th wedding anniversary. “What is it for 20th?” Mr. Waffle asked. “Porcelain,” I said sapiently. Yes, indeed, the plumbers were still in situ. Plumber père announced to us at 7.30 in the morning that they would not be finishing until the following week. Unsurprising but unwelcome intelligence. Mr. Waffle and myself went down the road for an early restorative breakfast to recover.

Meanwhile, as you will recall, it is jam season. There is a bumper crop of plums from the tree this year and I constantly have some kind of jam process on the go. Daniel and herself helped me stone plums on separate nights. “It’s like that Seamus Heaney poem,” I said. Michael, however, remained unwilling to assist even when I made him read out the poem aloud. Alas.

I didn’t get home from work until 9, sadly, and no sooner was I in the door than poor Mr. Waffle was called to a work emergency. We’ve had better anniversaries. We can celebrate on holidays.

I rounded off the evening by driving out to a distant suburb to pick up herself from a friend’s house.

The plumbers have installed a temporary shower in the utility room (it’s bad but not quite as bad as it sounds). The space is tiny, like a shower on the ferry. Better than nothing.

Herself had some friends around to the back garden. I sent them all home with a jar of jam.

Mr. Waffle and Daniel went to the Aviva: more live sports, where will it all end. The home team triumphed against, I want to say, a team from Luxembourg?

As we contemplated the ongoing works in the house, herself asked, “When we are looking after the house, do you think we are working with it or against it?” I said I thought not, remembering my father who always said, “Entropy is against you.” Perhaps it was just a low moment.

The plumbers said they would not be coming the following day but the tilers were coming on Saturday. As the plumber said, “They don’t have great English but they’re good tilers.” “Where are they from?” we asked. “Romania maybe,” he offered.

A plumber free day. And my last day in the office before 3 and a bit weeks of holidays. Rejoice. I got a work call in the afternoon (when I was off) which was not a great sign but never mind. I took herself off to get her first vaccination. Rejoice, rejoice.

We had a very normal morning in pre-Covid terms. Herself joined her parents for breakfast out. Mr. Waffle and I cycled into town to pick up a light fitting for the bathroom. He went home then and I went on to see the Martin Parr exhibition in Temple Bar which is excellent. So good that I bought the exhibition book even though it has an introduction by Fintan O’Toole (Ireland’s foremost public intellectual) whom I find very trying. I took in the National Library photography exhibition as well. I went to the Temple Bar market and bought some bread for lunch. I went to the shops and bought more jam jars (planned) and a dress (more spontaneous). It was the most normal morning I have had in ages and I am so grateful to the vaccine for giving us our lives back.

It was a longer morning than usual though as the tilers arrived at 7.30 and I was keen enough to get out from under their feet. They’re from Transylvania actually, thanks for asking.

Mr. Waffle discovered as he was going about the monthly neighbourhood clean up that our misfortunate next door neighbours have got Covid. Only their 18 year old was not fully vaccinated but they all got positive tests and are dutifully self-isolating at home. It was particularly grim as they were supposed to be in Schull on their holidays this week.

I had been notified that a book I wanted had arrived at the library. Myself and Dan cycled up at speed, anxious to get there before it closed at 4. We had, however, forgotten that on bank holiday weekends, the library is closed on Saturday. I love my library and it provides an amazing service but this drives me crazy and it catches me every time.

I took the boys up the road for a haircut. As we were crossing the road, I met the waitress from the cafe at the top of the road whose daughter is in the boys’ school. She said how big the boys were and that she hadn’t seen us in ages. I pointed out that the cafe was closed and wondered were they re-opening now. Apparently not, after seeing the 96 pages of regulations, the owner has decided that they will remain closed to indoor dining for now. Understandable – particularly when they have a well-established bakery. It seems pretty difficult for cafes and restaurants – I do feel for them.

At mass, the leaflet said that one of the saints whose feast occurs this week was Saint Eusebuis of Vercelli. It was such an odd name that I looked him up. Quite dull but his wikipedia entry refers to St. Lucifer of Cagliari. I kid you not. He’s worth a look even on the basis that wikipedia feels no need to comment on his unusual name.

I went into the Hugh Lane gallery on my own in the afternoon (my family having declined this offered treat) and had a sustaining tea and a bun in Bewley’s afterwards. How much am I enjoying having my life back? Very much indeed, thank you. 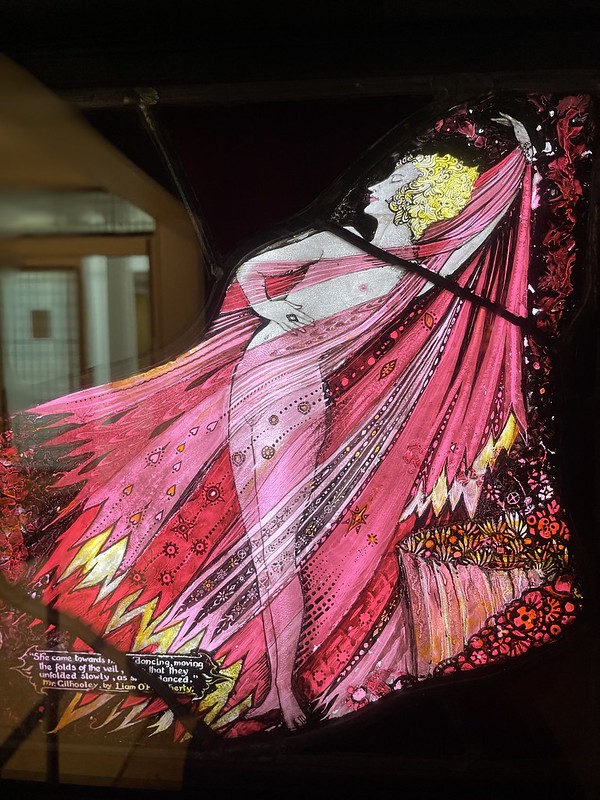