It’s been a busy month. It would have been my mother’s 86th birthday on the 1st of February; the feast of St. Brigid (and from next year we’re going to get an extra bank holiday to celebrate it as well – a Covid dividend apparently). She was very fond of this poem and often quoted from it. Apparently we do all turn into our mothers.

At mass a small child was running around the church. I recognised her mother and realised that she was the last baby baptised before the pandemic started (I mean I think that the church was still baptising away, but the pre-baptism meeting with the outreach team was halted for the duration of the pandemic). It has been a long haul. Particularly for the parents of young children I would imagine.

Life is gradually getting back to normal. From tomorrow, we can stop wearing masks in most places. The other night Mr. Waffle went out for a drink with his friends; “just like a real boy,” said Daniel who in his sister’s absence is bidding fair to become our most sarcastic resident. It is not, however, that he never met his friends in the pub before but that it has been a couple of years since he has done so and the boys have just forgotten what it was like before.

Mr. Waffle and I went to the cinema for the first time since the pandemic started (if you don’t count the time we went to see the Met live streamed and I really don’t). We saw Belfast. It got rave reviews and I did quite enjoy it but it wasn’t as fantastic as everyone said. I asked my friend from Belfast (who grew up six minutes walk away from Kenneth Branagh’s street) what he thought and he said he felt that broadly it was quite realistic – though no one is buying that after a Presbyterian funeral the mourners were invited to do a bit of singing and dancing. My friend did comment that he felt Branagh really wanted it to be a musical but lacked the nerve to follow through on that ambition – you can see how a musical about the start of the Troubles might be.. challenging. Once you’ve heard that it’s hard to shake that insight. I was surprised how much a working-class Protestant childhood in Belfast in the 60s was like a middle-class Catholic childhood in Cork in the 70s. They even had the same Christmas tree as us. And also, a favourite song of my father’s – from some film I think – “Do not forsake me oh my darling” was featured on the soundtrack. I don’t think I’ve heard it since he died.

February is rugby season and Dan has been to see see the Irish team lose to France with his uncle a couple of weeks ago (did you see anyone you knew at the match? yes another uncle from the other side of the family – Ireland is tiny) and win against Italy today. Neither entirely satisfactory – the first for obvious reasons and the second because it was a massacre. Oh well. I remember two years ago when lock down started during the six nations – I am not a massive rugby fan but I am so glad to see it back. Poor Daniel has been injured again in GAA (no matches or training for a week says the physio), at least it isn’t rugby, I suppose, where his never give up attitude could be quite terrifying.

We had friends round to dinner. We went to an exhibition (on the Treaty in Dublin Castle – a bit dull but worthy and, you know, an exhibition).

My sister and I went on a food tasting tour in Cork. Not bad but it started at 10.30 and the first bite of food did not pass our lips until 11.45. Can I tell you how much I regretted skipping breakfast so that I would have room for all the food I was going to taste? Anyway, the best tip was always book a food tour when you go to a new city as, by definition, it will be run by people who love food and will be able to give you great restaurant tips for your stay. I give you this for free.

The tour guide described how he met Prince Albert of Monaco when he (the tour guide) was doing some yacht racing and Prince Albert asked him where he was from. Our guide said Ireland and Prince Albert said, “My mother was Irish.” “I know,” said the guide. I quite liked the modest assumption of Albert that we might not know who his mother was. She was American, of course, but we can be flexible when it suits us. She stayed in the Imperial Hotel when she came to Cork, if you’re interested. It’s also where I got my first morsel of food when on the food tour and where my granny and Aunt Cecilia used to meet for afternoon tea on a Saturday. A historic spot.

In other, it’s all over bar the shouting, news herself had some school friends visit her in England and then we came across to see her. God, it lashed rain. Due to a booking mishap we had to move accommodation during the two days we were there and we traipsed miserably about with our sodden bag rolling behind us.

However, notwithstanding the appalling climactic conditions, we had a lovely time overall. The Princess showed us around, found good places for us to eat and introduced us to her English friends (lovely, articulate, polite young people who were nice to her brothers – gold star). We went to a museum. I went to evensong where two of her friends sang (one of them is -gasp – Tiktok famous) and it was absolutely beautiful.

I said to her, “I see everyone’s wearing those pearls on their eyes now that you had a couple of years ago. ” Very fashion forward though I still think a bit daft looking. “Where did you get them?” I asked because they were definitely not available in the make up shops then. “From the wedding stationery bit of Eason’s,” she said. Maybe she’ll make a fortune yet as some kind of futurologist.

After our visit to herself in college, we went to London for a couple of days. Did you know that you can pay for transport in London with your contactless bank card? Hands down the most impressive transport innovation of my lifetime. Delighted.

We travelled by boat, 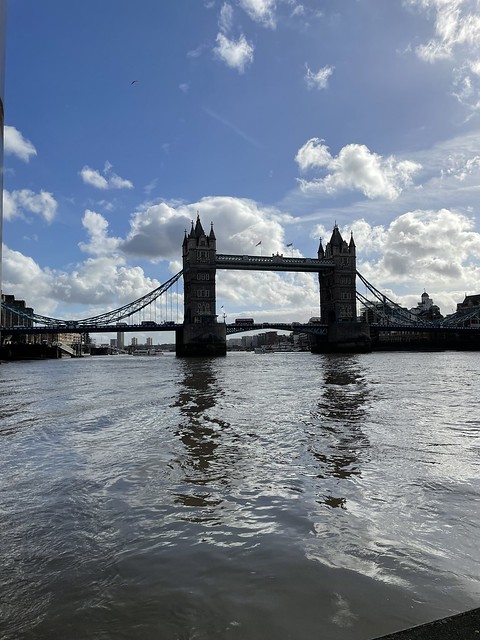 we went to the London Eye, 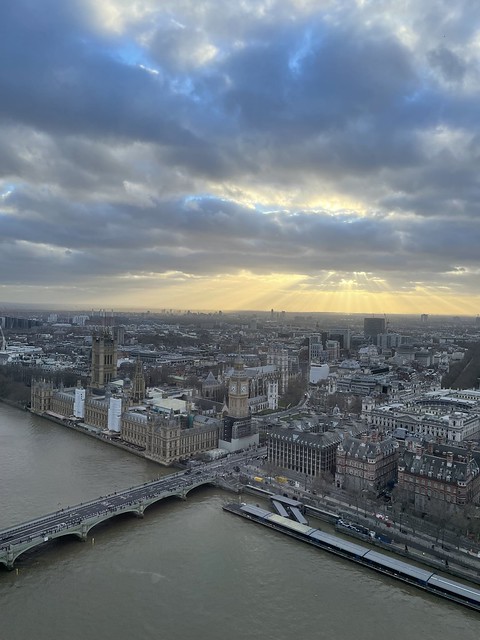 the Tower of London, Covent Garden, the British Museum (briefly to check out a complaint written in cuneiform which Daniel had seen on the internet), Hodge’s statue, 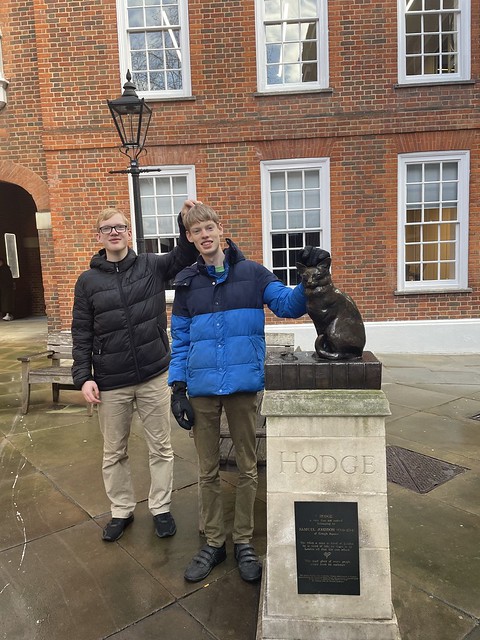 Leadenhall market (adjacent to Gracechurch street where, enthusiasts will remember Mr. and Mrs. Gardiner lived, Michael who spent the week reading Pride and Prejudice was resolutely unimpressed but I, a true fan, was charmed), 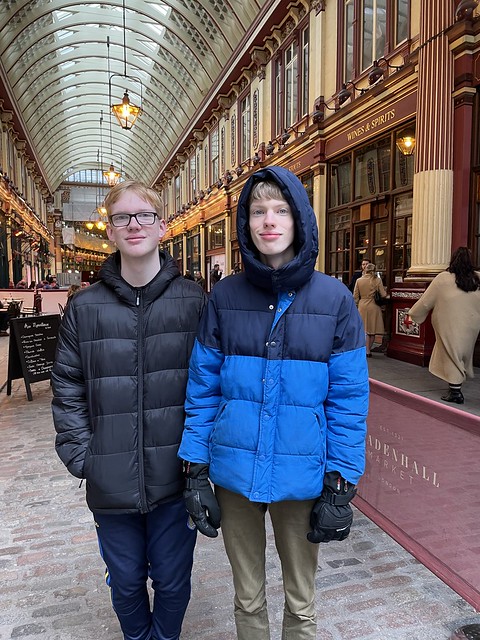 and Mr. Waffle’s sister’s family for dinner and an exciting chance to inspect their new house purchased last year.

It was all excellent though slightly exhausting. I was never happier to splurge on a taxi than when I had walked from Bloomsbury to the Tower of London. What was truly wonderful was having the London relatives on tap for advice on what to do and – possibly more importantly – where to eat near the various attractions. It was like having an expert guide with full knowledge of you and your family’s needs. In fact, actually, that was exactly what it was. It was the best trip I’ve had in a very long time (even pre-Covid). Still, I was possibly influenced by the fact that it was very, very nice to be abroad for the first time since summer 2019*. 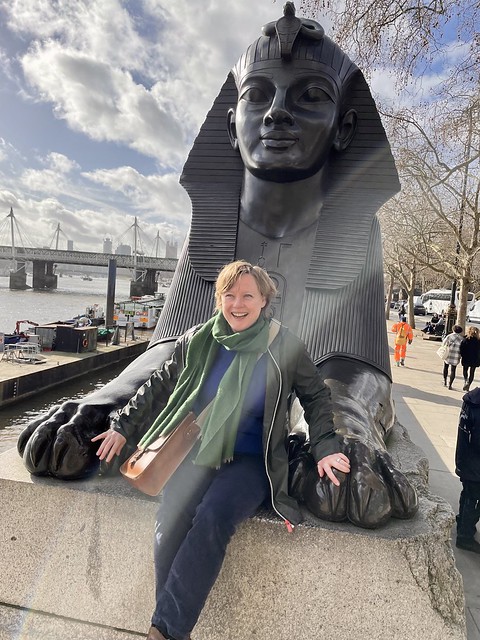 I was a little unnerved when we got home and Michael said that it was good to be back somewhere the Russians were less likely to think of as a target. Does he not realise his sister is living in England? Oh the poor Ukrainians.

And in final it is over, surely it’s over, news, I’ve decided to take a bit of time off work. I am flattened. My mother died in June 2019, my father died in December 2020, work has been tough in the pandemic, herself has left home and her brothers will be finishing school next year and moving on to a new part of their lives. I feel a bit like it’s now or never. So I will be removing myself from the labour market from June 2022 until October 2023. I have no major plans, I will not be travelling the world or writing my novel. I might rejoin the tennis club; that’s about the height of it. Funnily enough one of my bookclub friends is also taking some time out. I am very conscious that I am lucky to be able to do this.