I spent a good part of the morning doing logistics with herself for her trip to Paris in September. She was in Berlin, I was in Armagh. It seems extraordinary how much one can do online now (old crone speaks). Anyhow, eventually we finished up and Michael and I went out for a look around Armagh. We went to the county museum on the Mall which was small and contained the charming, slightly random, exhibits I associate with local museums. 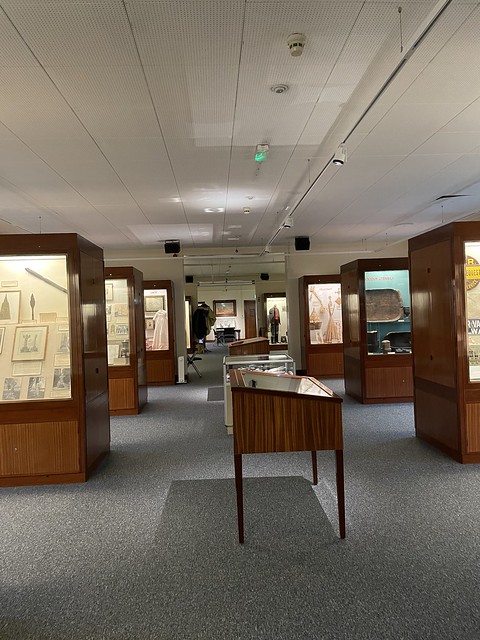 We found a cannon from the Crimea. Mr. Waffle says that they must have brought home a boatload when they were coming; apparently the one on Dun Laoghaire pier is very similar. 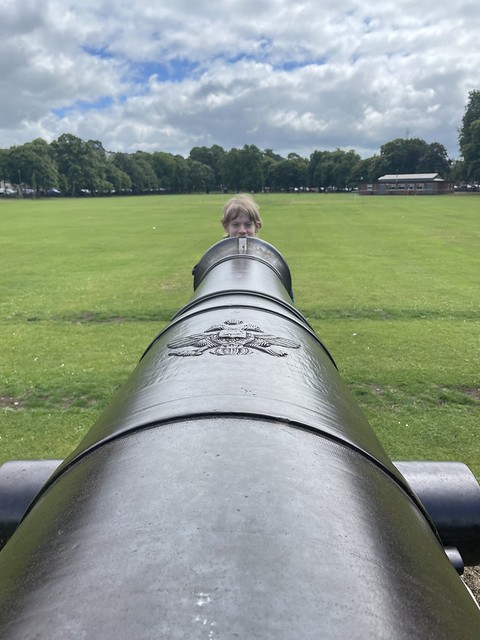 We went to the Robinson Library which both of us really liked. Coincidentally, I think the Piranesi books we saw in Dublin were actually on loan from the Robinson Library. Archbishop Robinson was the big cheese locally and established both the library and the observatory and was determined to make Armagh a university city to rival Dublin. This did not happen but it was not for the want of trying on his part. 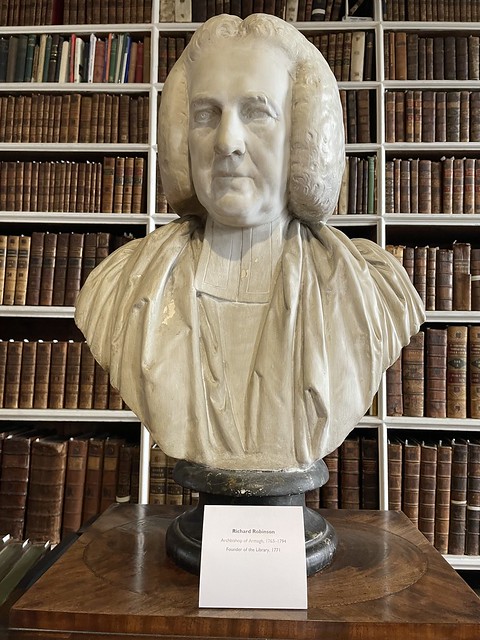 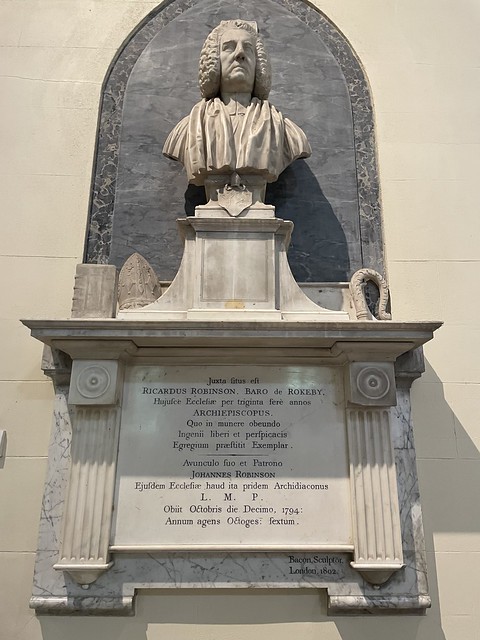 The librarian was lovely and very helpful. And then she left us alone with all the books without so much as a velvet rope to impede access. She also left a pair of magnifying glasses. 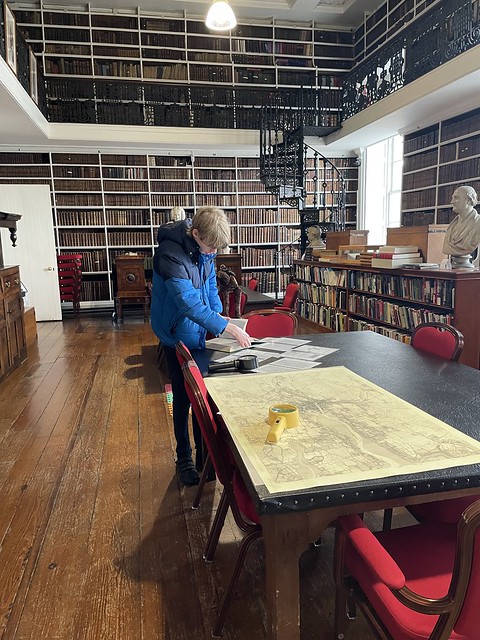 There was Swift’s own first edition of Gulliver’s Travels where he had made slightly irate amendments to the text which the publisher had changed without Swift’s permission; I think because the publisher didn’t want to go to gaol. Archbishop Ussher was also a big name locally and a first edition of one of his works was displayed. He’s the man who worked out that the date of creation was 22 October 4004 BC. 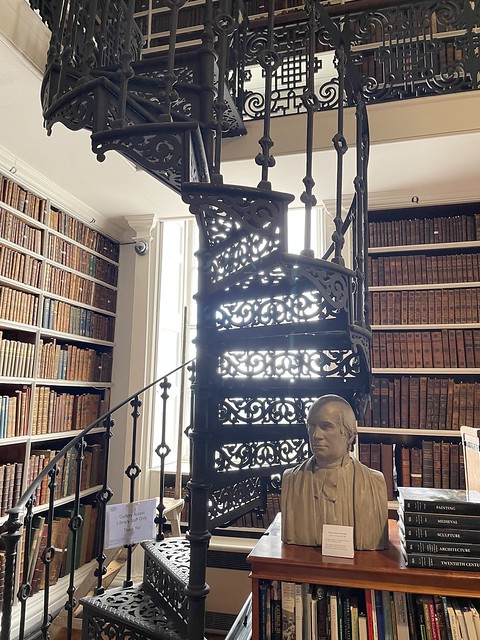 Michael retired to the house after our cultural odyssey but I went into town to see whether I could find a paper (yes) and a cup of tea (definitely not). It was 4 in the afternoon and the only suggestion the woman in the newsagent’s could make was that I could get a takeaway tea from the Spar. I mean, really. I took myself back to the house with the paper and made my own cup of tea. An economy, I suppose.

We were up with the lark (9 o’clock) to see Andy Pollak talk about whether the South is ready for re-unification. He thinks not, if I may summarise. It was funny because, aside from the obligatory man from the Department of Foreign Affairs, Michael and I were the only two Southerners there and it’s always interesting to hear what your neighbours are saying behind your back.

We found a nice cafe beside the cathedral and had breakfast and then went to have a look around the cathedral which had been closed the day before. 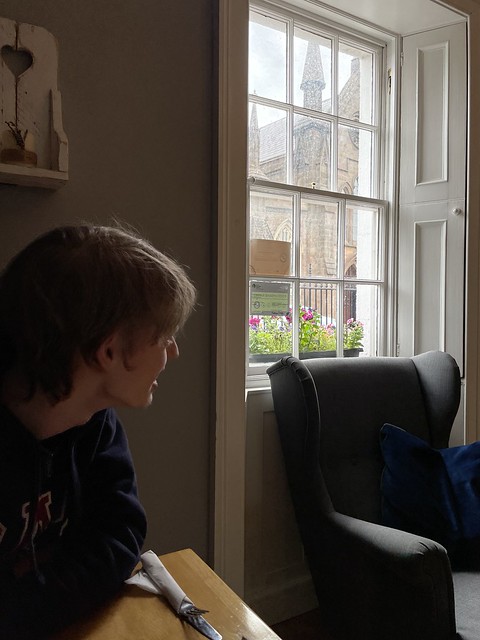 Mildly interesting and we had it to ourselves which I always enjoy. 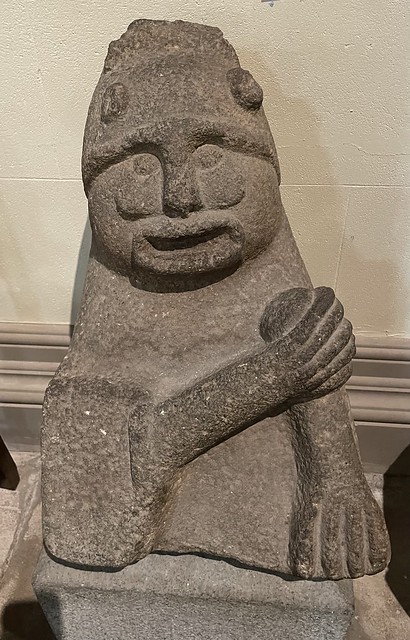 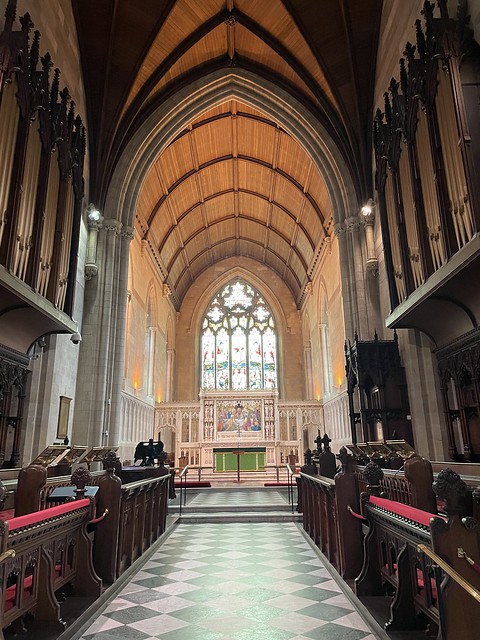 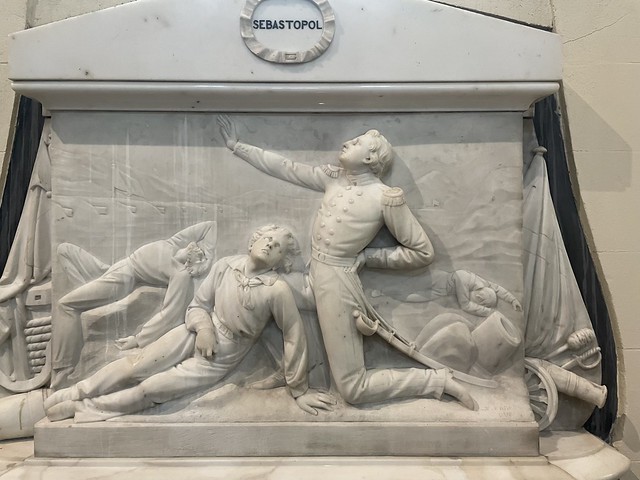 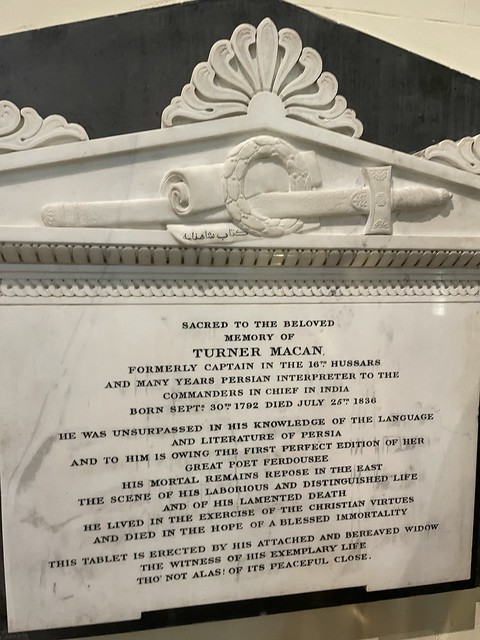 And then onwards to the Jan Carson talk which was the reason we went on the trip in the first place. 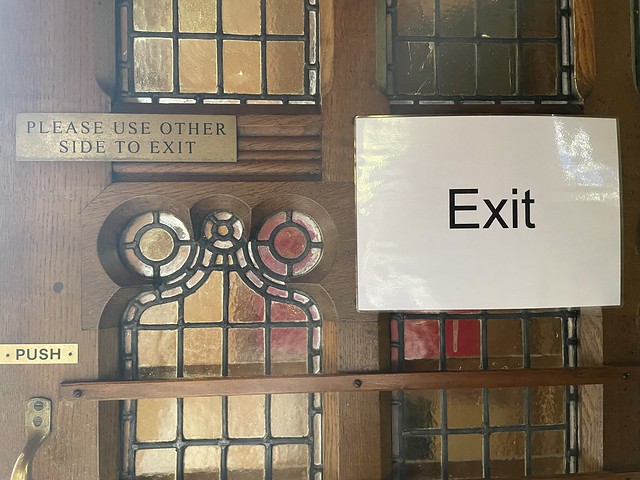 “I’ll just double check the tickets,” I said to Michael. “1.30 is an odd time, maybe I have it wrong.” It was 1.30 but on the day before. I was furious with myself. Alas. We went to the Planetarium instead. It was fine in its way but aimed at a younger audience. It included an impressive exhibition of large lego dinosaurs (if that’s your thing) but our hearts weren’t in it when we should have been at the the talk. 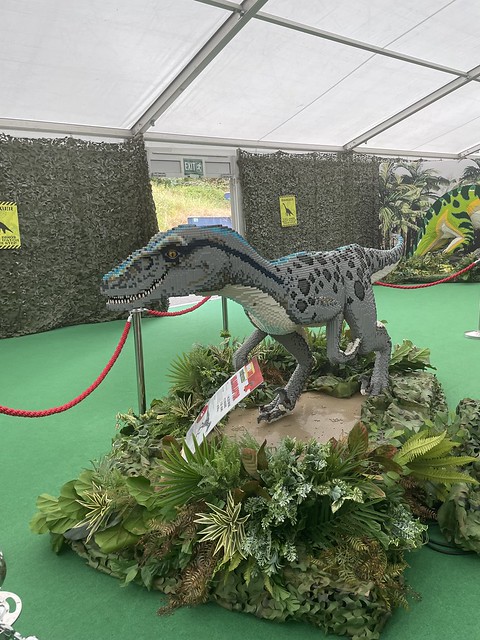 We dutifully went to Archbishop Robinson’s observatory but you can’t get inside so we had to imagine what the Archbishop provided. Very impressive, I’m sure. 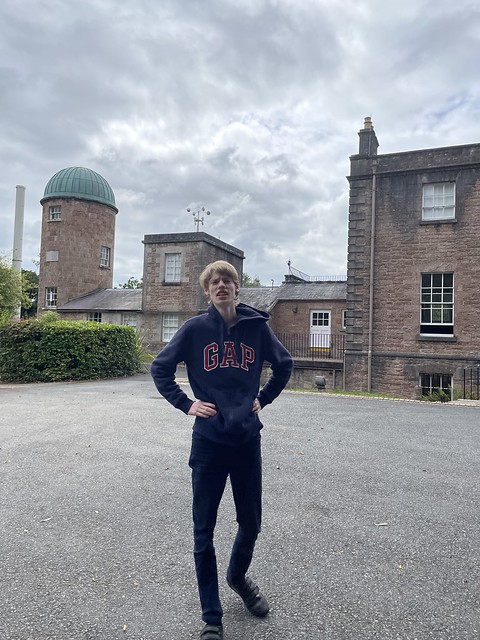 We cut our losses and drove home. It’s only an hour and a half away so we were home by late afternoon which was very pleasant too.

Mr. Waffle took me out to to breakfast to celebrate our 21st wedding anniversary which actually falls on the 28th but, look, we cut our cloth according to our measure.

Herself moved on to London on her European tour – her kind aunt and uncle let her stay in their place and she is pleased to be luxuriating in their empty house rather than sharing a dormitory in a Berlin hostel. 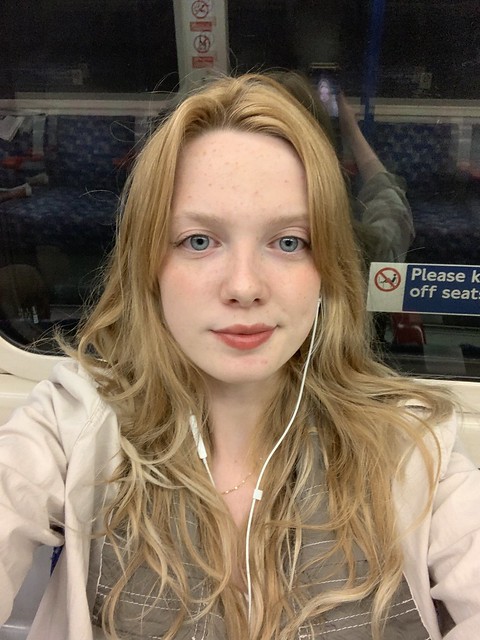 Our Ukranian cleaner came to our house with her sister who is visiting her. I decided to try out my fledgling Ukranian (one completed duolingo course, thanks for asking). It turns out I can only say certain set phrases. My comprehension is alright, actually, but my production is almost non-existant. I found myself listing the months of the year which, you know, isn’t a fantastic conversational gambit but the months of the year are weird in Ukranian, they’re named after plants and natural things and completely different from all the other Slavic languages. Also, to me, March (березень) and September (вересень) are almost identical (birch and gorse, I understand, in case you’re wondering). They were quite sympathetic but obviously baffled by my idiocy. To add to my difficulties, my cleaner’s sister has lived in Italy for many years. She speaks no English but good Italian. I also speak Italian and it’s much better than my Ukrainian, I can tell you. So we slipped and slid around English, Italian and Ukrainian for quite a while until I had to leave much to everyone’s relief.

Leaving Michael at home to recover from his exertions, I drove over to my friend’s house in a distant suburb to return the key to her Armagh house; give her a small present; and tell her about our doings. Then I drove to another friend’s new house in a different distant suburb; admired her new house and had a late lunch. I felt a bit guilty about not cycling but I have to recognise my not inconsiderable limitations. I could possibly have done with slightly fewer appointments but enjoyable all the same (world’s tiniest violin screeches). I actually still have my Covid wheeze although it is improving but I wonder am I absolutely 100%.

Michael and I went to Cork. In retrospect, the timing might have been better. We were barely unpacked from Armagh. But we took our bikes on the train which is a restful way to travel. We were staying in what I will have to get used to calling my sister’s house. I went in to the solicitor and signed the transfer in the afternoon. To be clear I am absolutely delighted that we are selling the house to my sister and not to a stranger; I know I can still stay there; and I have no need for a family home in Cork but it still felt a bit sad to be signing the papers. The end of an era, I guess. I feel that my links to Cork grow more and more tenuous and it is still very much where I am from and I miss it. To paraphrase James Joyce (whose father was from Cork, I might add) “When I die, Cork will be written in my heart.”

This is my 21st wedding anniversary and I am still pleased with my choice of husband. I am a genius. Yes it is all about me, thanks for asking.

The people organising Daniel’s course emailed that there was a chance to talk to the tutors on Friday. This is always a feature of the last day of this course – which herself did before Daniel – and I have never been able to go before because of work. And this was my last opportunity but, I had forgotten and Mr. Waffle was going to go again because I was in Cork. Such a waste because I am really interested in my children’s academic performance and he’s very much a “so long as they enjoyed it” man so our questions rarely overlap.

Michael and I had a look around the Crawford Gallery and the market. We visited my 93 year old aunt who was pleased to see us. My sister’s partner took Michael to spend an evening playing Magic The Gathering (if you don’t know, you’re better off) with a bunch of fellow enthusiasts and my sister and I went for a walk in the park. Tame pleasures but enjoyable. 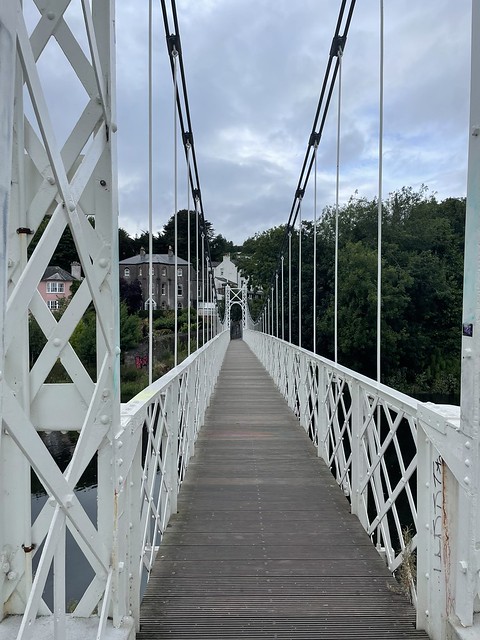 In Dublin, Daniel had his last day on his course. It was great for him and he really enjoyed it. They have lots of quirky traditions one of which is formal Friday (worse when the weather was hotter but still odd, Dan says that many of the boys wear three piece suits, I mean how many boys have three piece suits?). Anyone else think that he looks like a Mormon missionary? You might like to note that his hair has been growing for two and a half months. 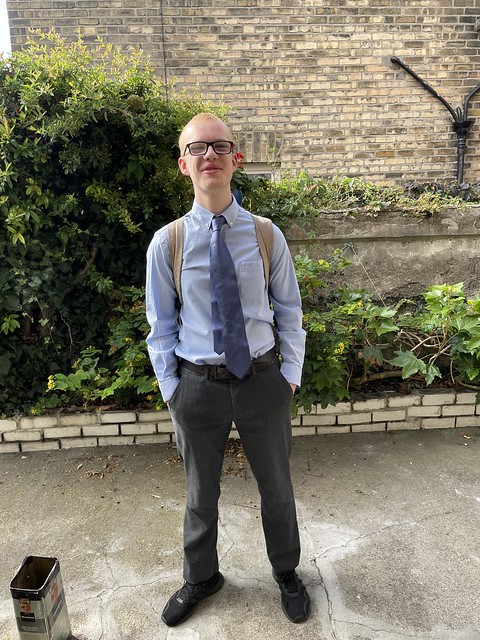 Michael and I arrived back in Dublin in the late afternoon a bit exhausted from our excursions but, as I said to him, two full days with nothing planned before our trip to Stockholm. He was strangely uncomforted.

We are off to Stockholm on Tuesday and then onwards to Berlin. There will be no updates until the end of August when we get back from our holidays unless something really exciting happens. While we are away, my brother is staying in our house in Dublin along with herself (she is coming to Stockholm but leaving us when we fly to Berlin as she has had enough of Berlin for one summer) so the really exciting updates are likely to be Dublin ones.