A couple of weeks ago, Mr. Waffle and I took the children to see “Trauma” in the science gallery. It was, well, traumatic. Not unexpected you might argue. After the strain of the exhibition, I felt we ought to do something further of a cultural nature. It would be hard to overstate Michael’s bitterness on hearing this news.

Since we were in Trinity anyway and, one of the major advantages of a degree from Trinity is that it gets you in free to the Book of Kells, I suggested that we might go there and get some use out of Mr. Waffle’s degree. We passed the playing pitches on the way and I found myself, somewhat to my surprise, standing beside a man yelling “Come on Trinity” at a rugby game. How little we know our spouses. Happily Michael’s weary insistence that we might as well get it over with propelled us onwards.

The library is lovely, actually. I note that we went there this time last year so it seems to occur to me as a good outing in January. As ever, I sold it to the boys as being the model for the Jedi library which may be true. They were cynical and bitter, “You say that every time.” 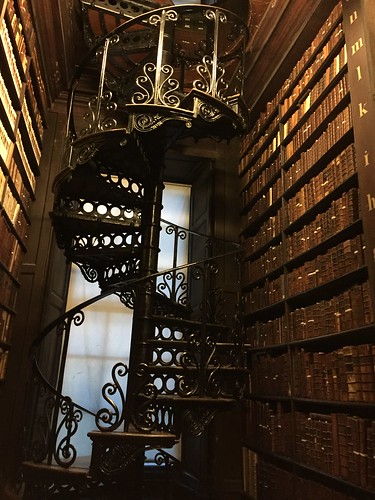 We didn’t stay long and it is genuinely interesting. Afterwards, as we emerged into the drizzle, having contemplated one of Ireland’s great treasures Michael said grudgingly, “I suppose it wasn’t too bad.” I think I will take that as a win.