The Alliance Française had a games night and, even though it was a school night, I insisted on bringing the boys and Mr. Waffle. I felt that the boys might enjoy it and that it would be good for their French. In my mind’s eye, I saw them sitting down and bonding with another group of board game-loving teenagers, ideally Francophone board game-loving teenagers, and having a great time while myself and Mr. Waffle went off Bewley’s and had a nice cup of tea. This did not happen. They did not enjoy it, it was not good for their French. It was all grown-ups who came with their own gangs of friends. There were no other teenagers. What was agonising for Michael, in particular, was that these were his people playing his kind of games but with no room for him. We sat in a corner, the four of us and tried to muster enthusiasm for playing in French games which we could equally readily have played at home and despite the enthusiasm and helpfulness of the librarian doling out games, it could not really be called anything but an abysmal failure. Alas.

We went to see Knives Out in the cinema and, unlike everyone else in Ireland, I thought it was only alright. The others enjoyed it though. We also went to see JoJo Rabbit which I enjoyed in a mild way but found myself distracted by the woman in the row in front who kept her phone on throughout: messaging, whatsapping, posting to instagram. It was spectacularly annoying but I was too craven to tap her on the shoulder and say something in case she was cross with me and I had to sit behind her for the rest of the film which would ruin it for me. So I sat there stewing in bitterness.

Herself bought us theatre tickets for Christmas which was a bit over-generous given her very limited budget, poor mite, but anyway they were for Drama at Inish at the Abbey which I found surprisingly enjoyable. I had thought it was going to be something like The Playboy of the Western World or the Beauty Queen of Leenane – all a bit West of Ireland gloom – but it’s not. It’s by Lennox Robinson (who was from Douglas in Cork, I mean, who knew?). It was written in the 30s and it’s about a group of actors who go to a seaside resort in East Cork (clearly Youghal) and put on works by Chekhov, Ibsen and Strindberg. The residents take the plays to heart and start acting like characters in the plays. I feel I would have got more out of it had I been a bit more familiar with the source material but still not bad at all. Annoyingly, the man in the row behind me seemed to find it knee-slappingly funny and I felt a bit short-changed when I considered his hilarity compared to my mild amusement but there you go. Inevitably, at the end there was a standing ovation. I can’t remember the last time I went to a play in Dublin when there hasn’t been a standing ovation. I feel it’s a slightly devalued currency at this stage.

Mr. Waffle and I were invited to a Burns night supper by friends. His mother was Scottish so I suppose this was why they got into this in the first place. It was in the Royal Saint George yacht club in Dun Laoghaire organised by the Dublin Scottish Benevolent Society of St. Andrew. In advance we regarded it with some trepidation as we both had head colds but we were sufficiently recovered on the night to have a good time. The Burns night supper was completely unknown to me as a thing in advance and I had never tasted haggis in my life. My friend helpfully described it as being a bit like a wedding with speeches after dinner and some singing. An early highlight was the “Ode to a Haggis” which was delivered with great verve. Also, I found that I really like haggis – it’s delicious. The speeches, I understand, follow an unwavering pattern with a speech on Robert Burns “The Immortal Memory”; “A Toast to the Lassies” and “A Toast to the Laddies”. I found myself sitting right in front of the speakers which was fine until the singer sang one of Burns’s numbers (A Man’s a Man for A’That) unaccompanied and very loudly, eyes closed, face puce and about two feet from me. It was a little overwhelming. He sang a couple of later numbers accompanying himself on the guitar and I found these less stressful. We toasted the President and the Queen of England. I don’t remember doing the latter before in this jurisdiction. Since the yacht club still has the Union Jack engraved in the top of its gilt edged mirror it all felt a little odd. But Dun Laoghaire is a bit odd that way.

The speech on Burns was fine – continuing the Abbey Theatre theme it was delivered by one of co-directors of the Abbey, a Scot, Graham McLaren. I wonder how much he is enjoying that role as the Abbey always seems to have a couple of controversies on the boil. Anyway, to Burns, I have to say, I knew he was an important Scottish poet but hadn’t quite realised his role in the Scottish national psyche (I should have guessed from earlier when Mr. Waffle showed me a picture from a Scottish friend of his who is married to an Austrian – it showed her slightly grumpy, Austrian teenage son, decked out in his kilt for Burns night in Vienna). The “Immortal Toast” man gave lots of Robert Burns and his influence on me and Scotland stories.

The highlight of the toast to the lassies was a rather drunken heckler sitting at the table behind me who roared at the speaker that it was “RAbbie Burns, not RObbie Burns!” There was some communal singing which I enjoyed very much and which felt oddly like mass. And we sang “Auld Lang Syne”.

Our friends who invited us are members of the organising society and they were allowed to bring up to four people. In advance they explained that we would be joined by four other people at our table of ten. Our friends said that last year they had worried about what old fogies they might be put beside only to find themselves beside four people in their 20s and realising that they were the old fogies.

There were quite a few people there whom I knew from other contexts including a good friend of mine (who is also, coincidentally a colleague of our host, yes, Ireland is tiny and we all know each other) who was there with her Scottish husband (appropriately attired in kilt) and who was actually put at our table but tragically between our group of 6 and her and her husband there was a couple (lovely people I am sure etc.) unknown to any of us so that was a little unfortunate.

Overall though, a rather thrilling and exciting new experience to have at my vast age. Recommended. 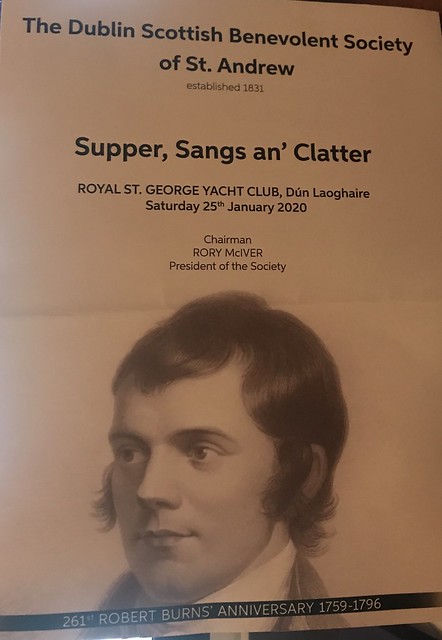