When Mr.
Waffle was 7, his parents moved to Venezuela for six months.  I was looking at the pictures from Venezuela with him and his mother one day and
there was one of him in a rather twee t-shirt featuring a little boy and girl
fishing together.  Â“Oh yesÂ” he said
bitterly Â“my Â‘gone wishingÂ’ t-shirtÂ”. On closer inspection, the words Â“gone wishingÂ”
did indeed feature in faded letters over the picture on the t-shirt.  It appeared that because they were only in Venezuela for 6 months, his mother had not
considered it necessary to get all the kit required by the school and instead
of the regulation gym t-shirt, she had issued Mr. Waffle with the Â“gone
wishingÂ” number.  This had obviously
scarred his sensitive soul.

Me:  It says on her school list that we
have to get her a Â“tablierÂ”, what the hell is that?

Me:  But it gives the name of the shop where we
can buy themÂ…

Him:  But thereÂ’s no need, one of my old shirts
will be fine.

Me: But she
wonÂ’t have a smock like the other children.

Him: But,
for heavenÂ’s sake, it doesnÂ’t matter, itÂ’s only to keep her clothes clean when
sheÂ’s painting. 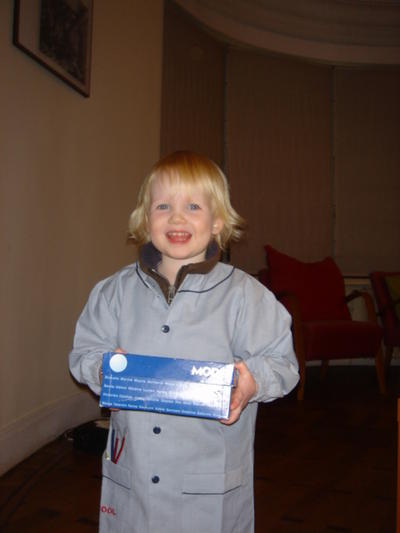 The other morning I found that Mr. Waffle had drawn a map of the supermarket and indicated
on it where all the items we needed were to be found.Â  I scoffed. I chucked it out.

Then on Saturday morning as I traipsed around the supermarket with Little Ms. Cranky and found that I had forgotten to get garlic in the vegetable section and wipes in the baby bit, I began to wish that I had the supermarket map. What on earth is this happening to me?