Some time ago we acquired the Pevsner guide to Dublin. It has, obviously, come into its own since our return to the empire’s second city. The author, Christine Casey, is a fantastic writer. She deftly, accurately and sometimes wittily describes the buildings between Dublin’s canals.

Recently we noticed a large mansion in a very run down part of Dublin. 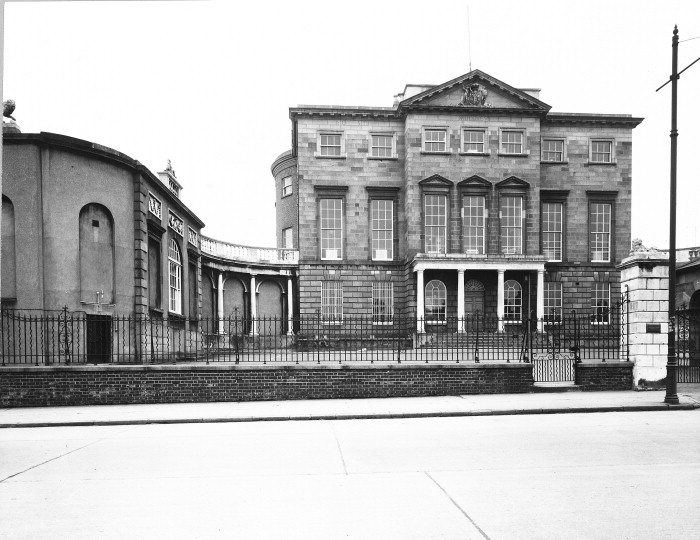 Pevsner told us it was Aldborough House and Dr. Casey introduced it thus: “Above the portico the thoroughly misleading motto Otium cum Dignitate (Leisure with Dignity). This grandiose and yet remarkably dull house is a testament to the inveterate vanity of Edward Augustus Stratford, 2nd Earl of Aldborough.” In describing the house, she says witheringly “The main facade is a traditional Palladian composition in all but proportion.” She includes an “oft quoted but indispensable [contemporary] account by Lady Hardwicke”: “The staircase is richly adorned with paintings. Let one be in your idea a model for the rest. Imagine a large panel occupied by the “Triumph of Amphitrite”personified by Lady Aldborough in a riding habit with Minervas’s helmet, sitting on the knee of Lord Aldborough [then aged 57] in a complete suit of regimentals, Neptune having politely resingned his seat in the car to his Lordship, and contenting himself with the office of coachman to the six well fed tritons. The whole corps of sea-nymphs attend the car in the dress of Nereids! But each, instead of a vocal shell bears in hand a medallion with picture (the head and shoulders as large as life) of and admiral’s wigs, bald heads, crops etc. Think of a whole mansion decorated in theis way.”

See what I mean? Within 20 years of its completion, it was being used as a school (by a Luxemburger – extraordinary no?) and now it is, apparently, very delapidated offices having put in some considerable time as a store house. Which, for all its lack of merit, does seem rather sad.