Actually we have been back some time but my evenings have been filled with brasso and stair rods (more of this anon). So three weeks of holidays and you are desperate to know how it went. I know, I know. A full account begins here. There could be days of this, so pace yourself.

Our heroes leave home. The house is immaculate for the French family with whom we are swapping houses. We turn on the dishwasher one last time. The Princess asks innocently, “Why is there water coming out from under the cooker?” Why indeed? The dishwasher had leaked behind the presses and litres of water were slowly seeping out from underneath. When we pulled out the dishwasher there was a flood. We mopped it up as best we could. We had a ferry to catch and all we could do was leave a note to the French people apologising for the smell and asking them not to use the dishwasher. A poor start. It also made us a bit later than expected so instead of pulling off the main road to have a nice picnic on the grass, we ate our sandwiches in the car in a small lay-by with juggernauts hurtling alongside us. In addition, Mr. Waffle had to field a number of work calls. Still we made the ferry. All in all, not a triumph though.

We arrive in La Belle France. Happily we are staying relatively near the ferry port. Mr. Waffle reaches for his immensely detailed map of Finistère (scale 1:1) to find that he has forgotten it. All we have is a tourist map of Brittany. Alas. A text comes in from our next door neighbours: “Do the French people have a chubb key for the door? You have only given us the latch key and you have double locked the door. Don’t worry, the cat came into us to be fed.” There followed much anguish as a) Mr. Waffle tried to remember whether he had posted both keys to the French people and b) we realised that the only spare chubb key in Ireland was inside the house.

Things began to look up when we arrived at the house. It was in Douarnenez which is a very red town. It is twinned with somewhere in Palestine and it’s history is one of industrial unrest. 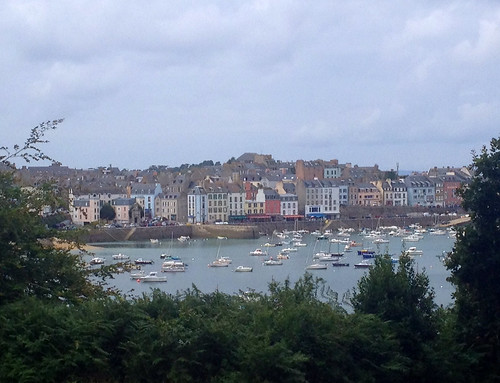 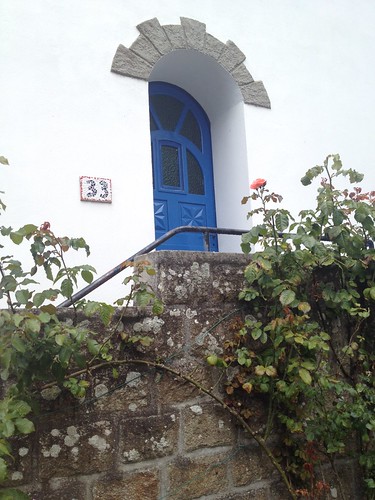 It was great. It had a laptop in every room (except Daniel’s – source of great grief), table tennis in the basement, bikes, scooters, surf boards, snorkeling gear and all the accoutrements of family life.

The children instantly sat up on the swivel chairs at the breakfast bar and began to swivel. 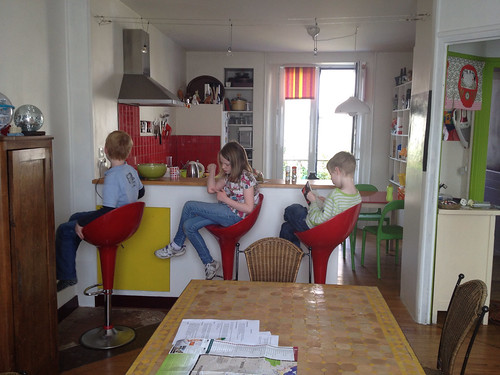 They stopped but not before one of them fell off and broke a chair. Then another child broke a mirror in the basement while playing table tennis. Attempts to remedy both of these were unavailing. The only glass maker in the greater Finistère area was on holidays until the end of August and he wasn’t about to come back for us. This led to great anguish until we gave up and phoned the French people and confessed our sins. They were very kind and not at all put out – apparently.

Daniel and Herself went out together to the boulangerie in the morning to get bread and croissants and were pleased with the success of the venture. They got us breakfast every morning for the remainder of the holiday. Later we walked into the indoor market, in the centre of town. In the afternoon we went to the beach and then went to Pont Croix for a cup of tea and a tour of the oldest house in town. The top floor was kitted out as an old fashioned school room and the children acted as you might expect. 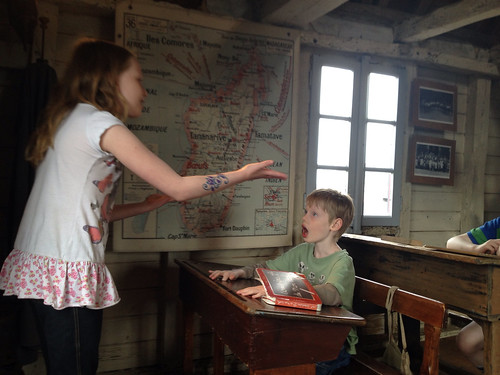 We went to the Pointe du Van which is pretty and not filled with tourists. While I was waiting for the children and Mr. Waffle to catch up, I overheard a French grandfather filling in his grandson on the actions of his grandparents in the second world war (one killed in the fighting). Then a group of German tourists went by chatting away. It’s still a little strange, isn’t it; although I assume that the French are used to it.

And then on to Pointe du Raz which is beautiful but has far more tourists per square inch than Pointe du Van. Arty shots below taken to give the impression we were alone when, in fact, we were practically surrounded on all sides. 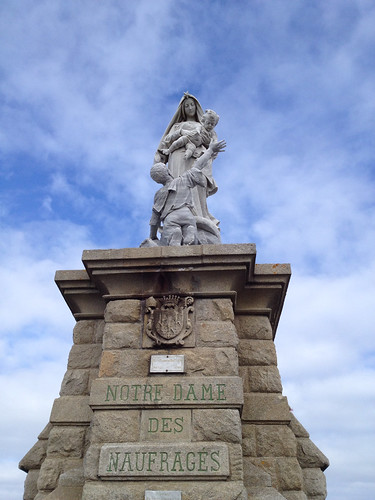 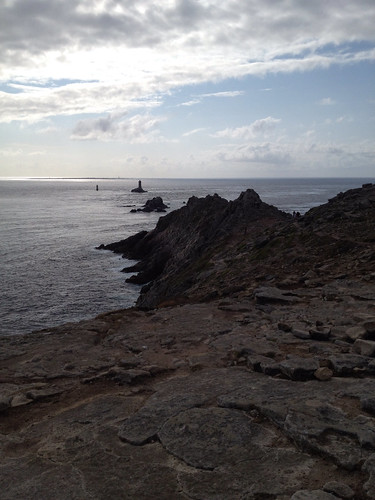 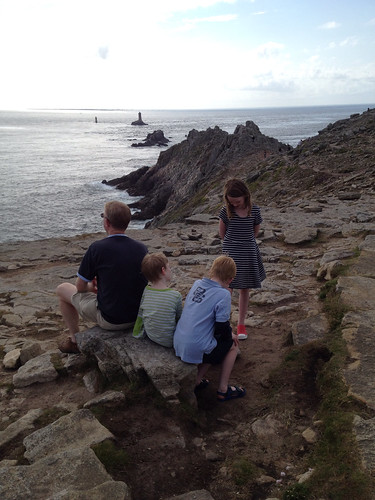 As the afternoon wore on, it got a little less busy and it was more possible to take in the beautiful view without jostling other tourists.

We went to mass. Mass in French. Long mass in French. The children were appalled. In the row in front of us there was a French family with many children. I hissed to mine that they were to admire the behaviour of the French children and emulate (what I assumed would be) their general air of resigned saintliness. My children were quite saintly actually but the children in front were dreadful. I have never seen such poorly behaved French children. Two of the boys who were about the same age as mine began to have a vicious sotto voce argument and then one smacked the other sharply (and loudly). We were amazed; especially when the father started to laugh. As Michael observed sagely, there was no way his father would have laughed if he and his siblings had been smacking each other. At the end of mass, the mother turned around and started chatting to us and asking us where we were from and whether we were Catholics. Really, you need to ask? 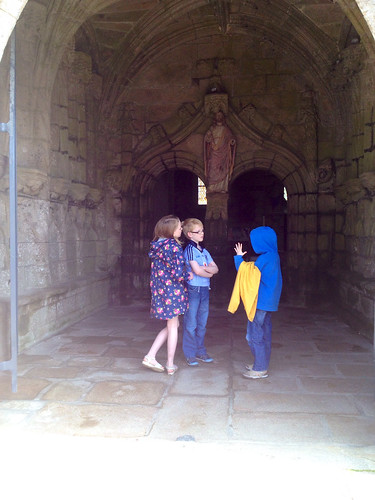 Across the road was a graveyard where the man who invented the stethoscope was buried; in the interests of family harmony we decided not to investigate.

I had not really thought through the implications of the Princess having a laptop in her bedroom. Inter alia we heard about: the extent of the British empire at its height; the patron saints for everything; the time it takes to fly to Scotland and six historical events that never happened.

We went out to the brocante in desperation. She bought herself a t-shirt from a man from Harold’s Cross in Dublin (relocated to Brittany) who turned out to be a cousin of a colleague of mine. Then we saw a friend’s sister and her family in the supermarket. Small world and all that.

We also had the obligatory summer Breton experience of Jeux Bretons [inevitably disappointing games played with things hewn from wood – a low light here was throwing the stone in the clog].

We went for a cycle in the park at the top of the road and had a look at the Roman fish factory. Your point? 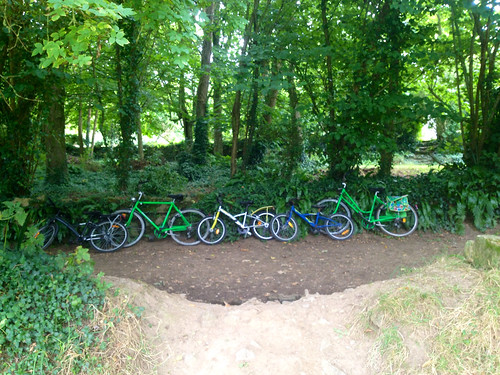 The bicycles which the French people had left for us were a little tired and as we cycled into the park, a very tattoed French man emerged from his house near the entrance and tut tutted about our state of readiness. He turned around Mr. Waffle’s wheel which apparently was back to front and pumped up my bike and Mr. Waffle’s. We were a bit taken aback by all the French friendliness. Our previous experience of French people had not led us to the conclusion that they were a warm, friendly, welcoming bunch. They have other strengths. Possibly being a communist town makes you friendly – maybe tourists are a novelty? We remained baffled.

I nipped into town later in the afternoon and to my intense astonishment there browsing in the shops was my friend the Glam Potter. The Glam Potter and I had been very friendly in Brussels as the Princess and her daughter were born within six weeks of each other. We saw an awful lot of each other but then I moved back to Dublin and she moved to England and we lost touch a bit – it was such a shock to see her. It was even more of a shock to see her daughters who were six years older than when I had seen them last. They were on holidays for a couple of days and I invited them all round to dinner the following evening.

We went out to visit the island – Ile Tristan – from which the town gets its name. Apparently Douarnenez means land belonging to the island. It was pretty and mildly interesting but an hour and a half is a long time to spend learning about the flora and fauna on a small island. Our only saving grace was that the GP and family turned up also and the children were able to inspect each other with mild interest. 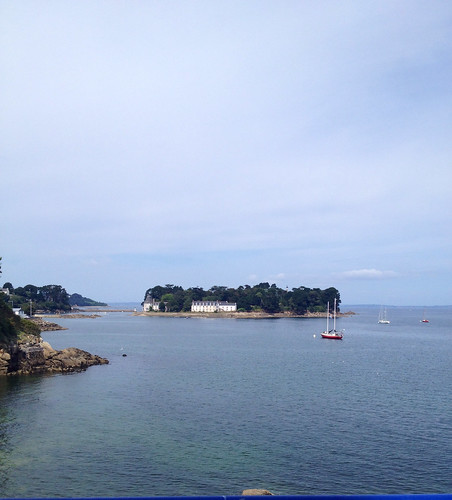 That evening we had our friends for dinner. It was so nice, we were all very nostalgic about Brussels and got to canvas the Scottish independence question. She is as Scottish as someone who grew up in Antigua can be. They pointed out that the house was just like millions of bohemian houses in Saint Gilles (slightly arty Brussels suburb) and it really was. More nostalgia.

We were recovering from our dinner the previous evening and we had a mild trip to the beach and I went for a cycle round the town but that was largely it.

It rained and rained. We went into Quimper and got rained on all day. 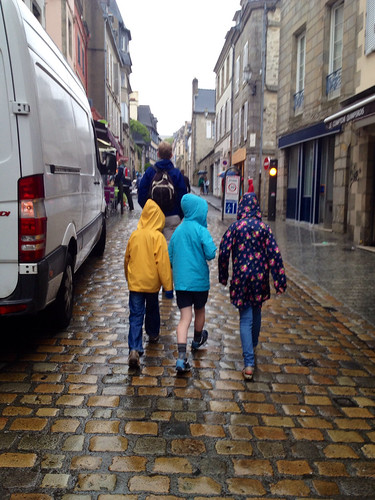 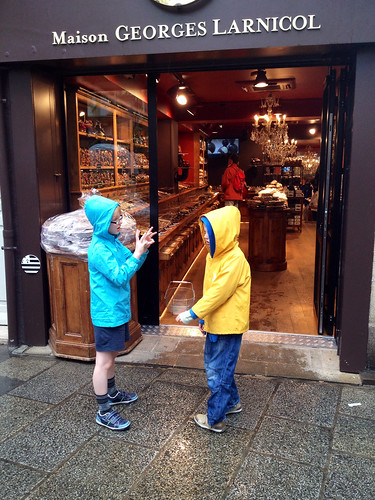 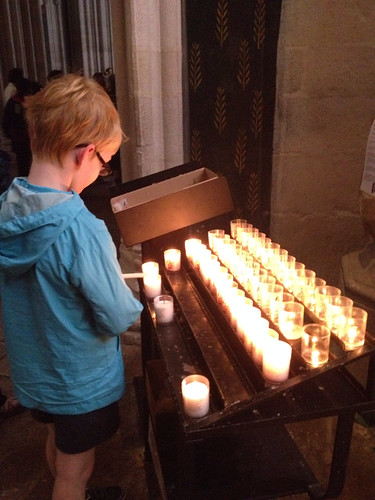 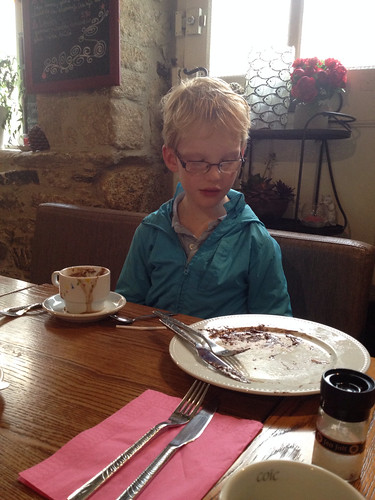 Mr. Waffle heroically volunteered to take the children on the tourist train that drove around the town while I went to see a very beautiful exhibition on Japanese art and its impact on French painting. He had his reward, however. We have been to Brittany loads of times and while we are there we read Ouest France every day. It is the most local of local newspapers. It is tailored for each town and, you know, “library gets 6 new books” could easily be a half page feature. We have attended innumerable fest-nozs and we have never featured. Our wait, however, was over. The next day, Mr. Waffle and the children were on the front page of Ouest France, true, the picture was small but, if you knew what you were looking for, you could see them, sitting patiently in the train in the rain waiting for it to depart.

That’s probably enough excitement for today. More in a bit, if you’re good.