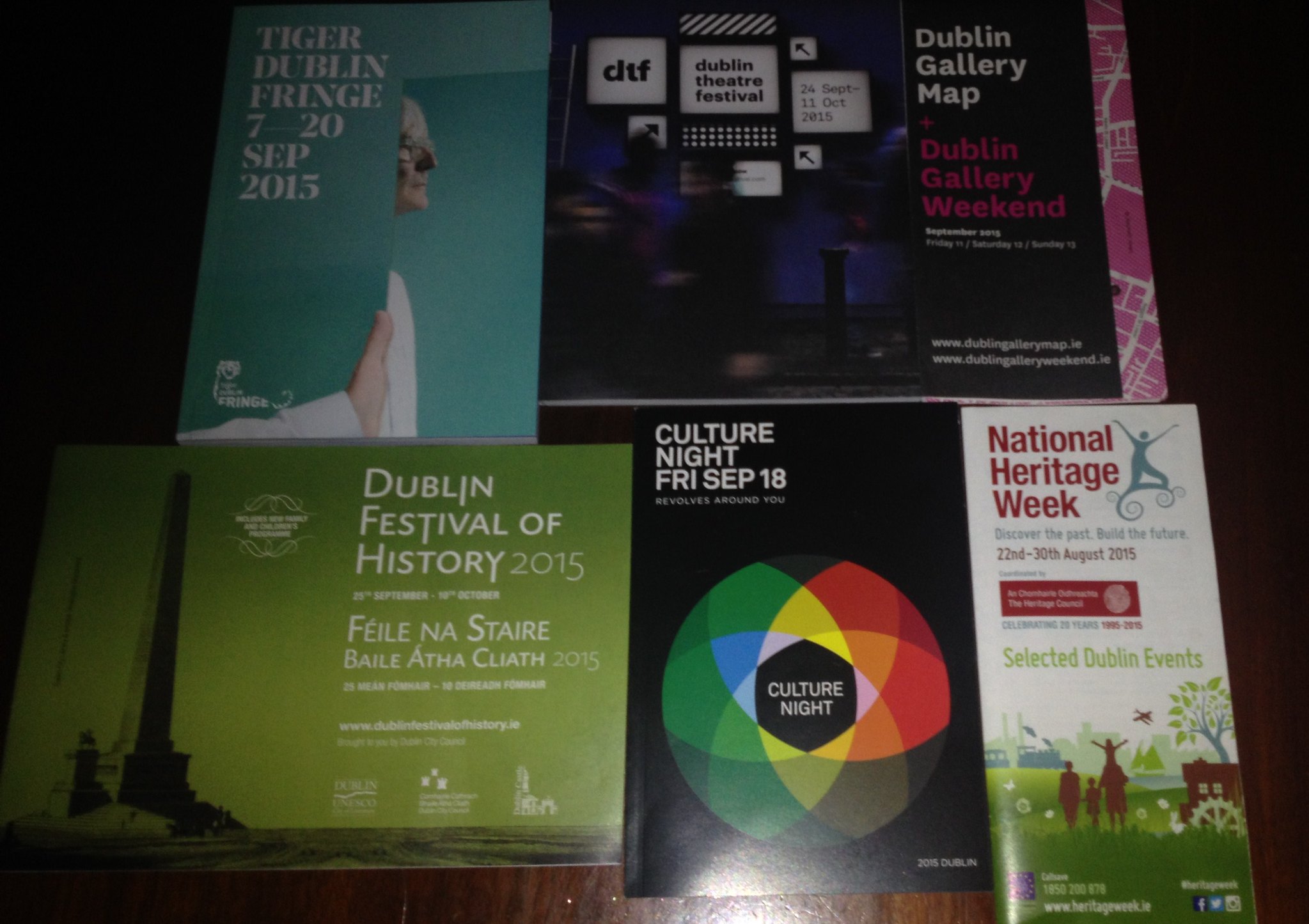 I got all the brochures from the Dublin tourist office. They handed me out the brochure for culture night surreptitiously from under the counter. Apparently, if they were out, they would all be gone. Baffling.

So we took part in a limited selection of events. Foolishly, I had already booked myself and the Princess into “The Importance of Being Earnest” at the start of the season; our stamina was compromised early. It was long – I had completely forgotten, but she enjoyed it, notwithstanding the extremely uncomfortable seats and the slightly mediocre production.

Then, I sent her to a music workshop in the Chester Beatty library because I wanted to use up her cultural stamina and her friend was going. She did not like it.

The children and I went to the “Secret” exhibition in the Science Gallery which was really excellent. Michael learnt to pick a lock. What’s not to love? 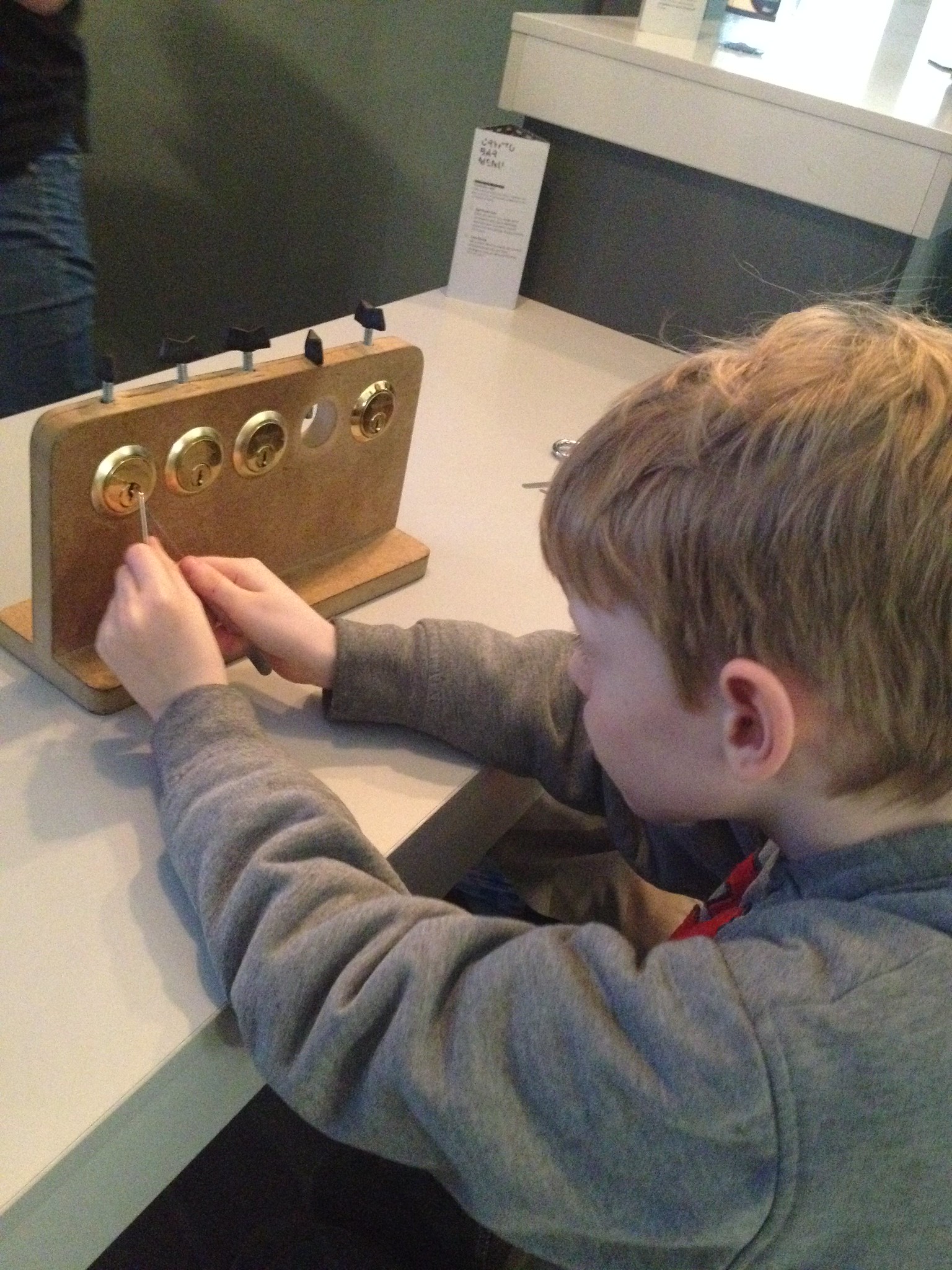 Unrelated. But, we saw people swimming in the Liffey. The horror. 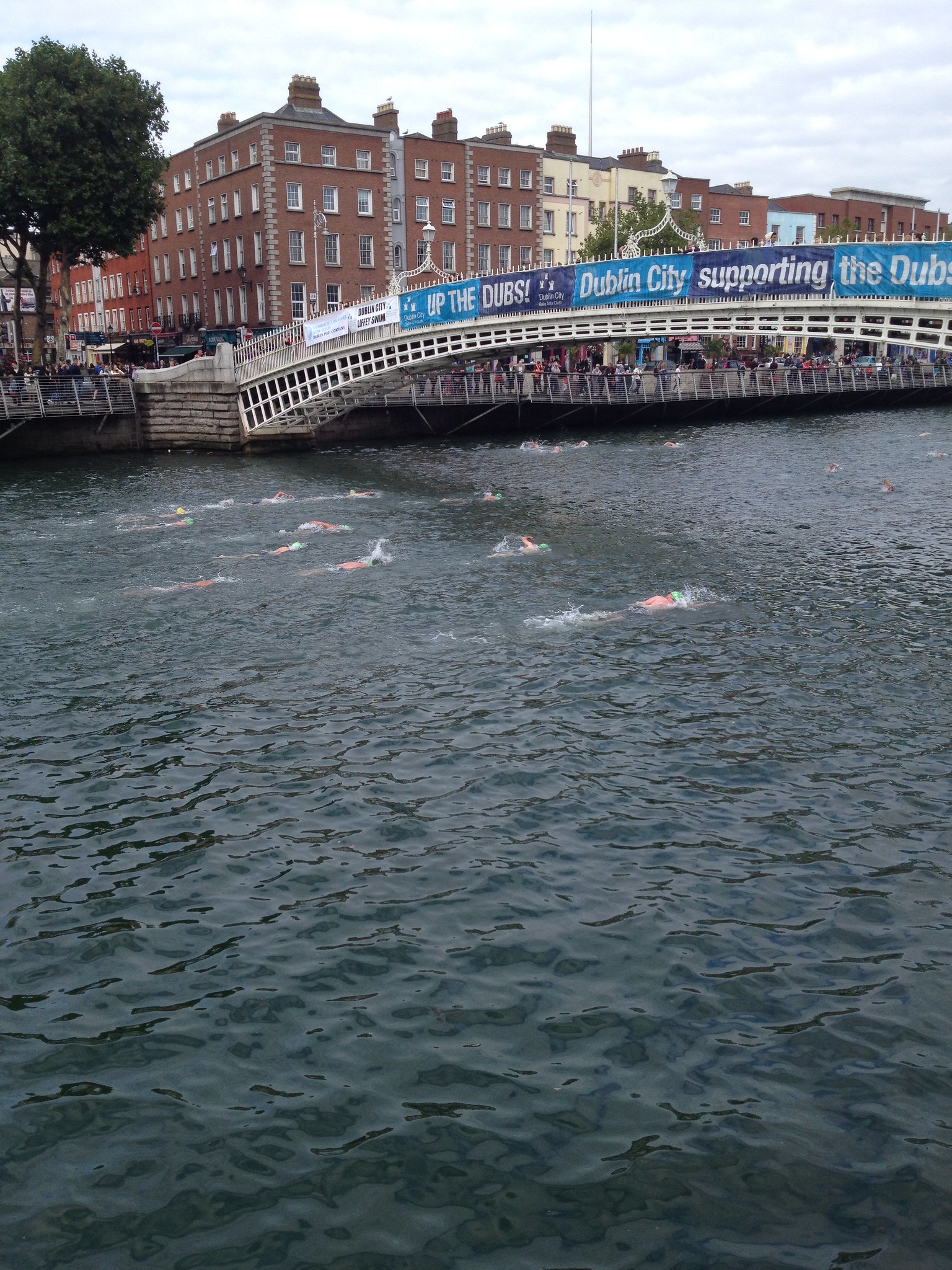 Culture night began well. We had booked an acting session which the children found mildly enjoyable. They were taught by a talented, enthusiastic and energetic young woman. There was a group of about ten children of various ages. Among other things she had them freeze as various professions. “Doctors and nurses!” she said. Then to each of the girls, she asked “What are you doing nurse?” to some she would add “Or are you a doctor?” and to all of the boys in turn, she said “What are you doing doctor?” It was obviously unconscious. I agonised, should I say something or not. I went up at the end and thanked her for a terrific session then I said about the unconscious gender bias. I felt like a heel. The Princess was utterly mortified.

By the end of the evening, the boys were beginning to wilt. The visit to the Quaker meeting house was, frankly, a mistake. Herself was really interested but the boys most emphatically were not. She listened in fascination to the nice Quaker lady telling her how they wouldn’t dream of imposing their beliefs on others or judging others for their beliefs. So different from the religion she knows best. If she converts is that a win or a lose? Look, it’s not Catholicism but, you know, it’s religion.

Mr. Waffle and I went to “The Man and Le Mans” at the Irish Film Institute’s documentary film festival. If you like motor racing, boy, was this the film for you. I do not like motor racing. As a bonus, there was an interview with the director. He explained that they had set the sound to extra loud before playing the film that evening. That was obvious to the meanest intelligence

In the fringe theatre festival we copped out and went to see two comedians. They were mildly amusing. Moment of the night was banter with the audience as follows:
Comedian: I hate audience interaction, see you [pointing to man in front row] what do you do?
Man: I work in retail.
Comedian: See, that’s not funny, how can you make that funny? [He continues with this theme and then turns back to man in the front row]. So Mr. “I work in retail, where do you work?”
Man: In Knobs and Knockers on Nassau Street.

Got the biggest laugh of the night.

We went to a thing called “By Heart” in the theatre festival. It was recommended to us. A Portuguese man teaches 10 people in the audience one of Shakespeare’s sonnets. It was a lot more entertaining than you might think. I forced Mr. Waffle to be a volunteer and I was too. It was sonnet 30 which goes as follows:

When to the sessions of sweet silent thought
I summon up remembrance of things past,
I sigh the lack of many a thing I sought,
And with old woes new wail my dear time’s waste:
Then can I drown an eye, unused to flow,
For precious friends hid in death’s dateless night,
And weep afresh love’s long since cancelled woe,
And moan the expense of many a vanished sight:
Then can I grieve at grievances foregone,
And heavily from woe to woe tell o’er
The sad account of fore-bemoanèd moan,
Which I new pay as if not paid before.
But if the while I think on thee, dear friend,
All losses are restored and sorrows end.

It doesn’t look too bad but it is quite hard when a) you can’t see the poem, b) the actor/director/writer/main man is Portuguese and although he speaks excellent English is a little hard to understand at times, just like Shakespeare c) the woman sitting beside you on stage is from Belgium and speaks little English and is getting you to translate the sonnet that you barely understand yourself, on the hoof, into French for her d) the audience is shouting out your line at you which you have forgotten in the stress of trying to translate into French the line “And weep afresh love’s long since cancelled woe,” while the Portuguese man assures you that there is no need to worry as the audience always loves failure [this appears to be true] and e) you are trying to follow the action [talk of Fahrenheit 451 and Mandelstam and the author’s grandmother] rather than repeat your line constantly in your head.

When I described it to my sister, she said that it sounded exactly like the kind of thing that happens in a nightmare and I see where she’s coming from but I did quite enjoy it. The next night’s volunteers were featured in a photo in the review of the play for the paper and it sums up the difference between Mr. Waffle and me that I was quite sorry we weren’t in the paper and he felt, strongly, that we had dodged a bullet. It was unfortunate, then, that shortly after the performance, it transpired that a colleague of Mr. Waffle’s had been in the audience. This man glided up to him at work and said, without preamble, “When to the sessions of sweet silent thought…”

I didn’t book anything for the children in the theatre festival, but happily, the boys got taken to something they really enjoyed with school and herself had been to “The Importance of Being Earnest” so honour was saved.

Between this cultural onslaught and the boys’ birthday and the return to work and school this is always an exciting time of year but you may look forward to more regular posting now that this year’s cultural work is done.