The cat is constantly starving. I do feel for her. As my sister pointed out, just because she is fat, doesn’t mean she isn’t hungry. But the vet says she has to have a waist and we have to limit her food intake. We are conscious that she is already supplementing her diet with random rodent snacks so are trying to feed her relatively limited amounts. She does not find that pleasing and she prowls around the kitchen whenever we are eating or preparing food in the hope of leaping up and stealing something from the table. It’s a constant battle and despite our vigilance she often gets away with stuff; scurrying off delightedly with a leftover chicken bone or the ham from one of the children’s sandwiches or some other delicacy.

Recently, we inadvertently and, I confess, foolishly left the fridge open. Quick as a flash, the cat got in and grabbed the cold roast beef left over from Sunday dinner. It was an enormous piece and she scooted under the armchair set aside for her use with it clutched between her jaws which were stretched to maximum capacity. She stayed under the chair making the most extraordinary growling noise at all comers. I picked up the chair and the Princess bravely picked the cat up. Then, I began to attempt to wrestle the roast beef from the cat’s jaws of death but to no avail. She clutched it firmly growling the while and struggling against the Princess’s iron hold. I was afraid to pull too hard as I really thought that she would let her teeth be pulled out rather than yield her piece of beef.

The Princess eventually managed to prise it from her and like the lion in Jim, “she slunk reluctant to her cage/snarling with disappointed rage” or, in her case, the armchair in front of the fire. She had the last laugh, of course, for what could we do but feed her roast beef until it was all gone. 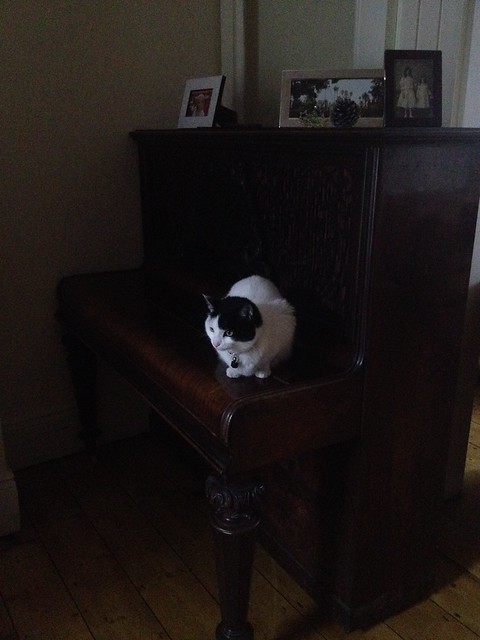 As though butter wouldn’t melt in her mouth.