Hello cruel world. We’re back from our French holiday and, as you can see from the title, my pretensions remain intact. Reentry to the world of school and work has been a bit exhausting and I will relay this in tedious detail in due course but first up the annual blow-by-blow account of our summer holiday.

The drive to the ferry was uneventful. We stopped for the, now traditional, meal of chips and Yorkshire pudding. Mmm, I know. 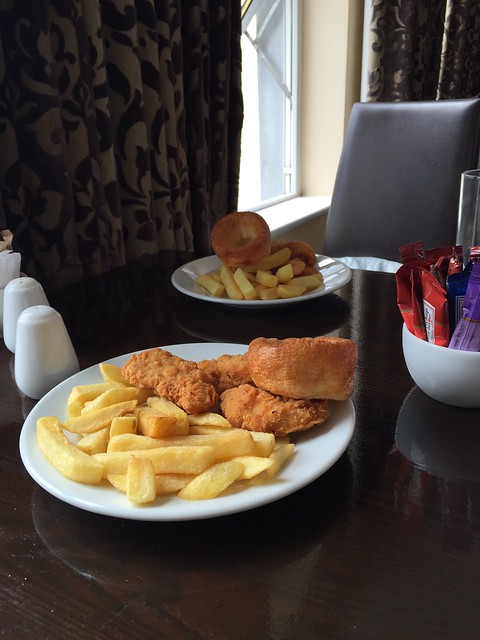 Due to late booking, one of our cabins on the ferry was three star rather than two star. It had a window and a mini-bar. That’s all it takes. The children, who had never encountered a mini-bar before, were very taken with it. 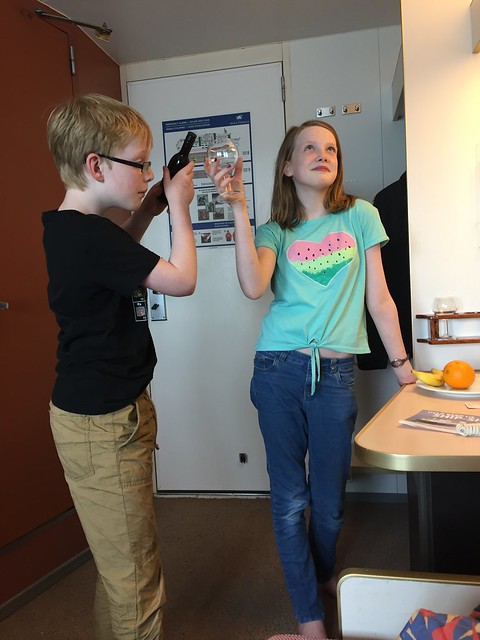 During the 5 hour drive from Cherbourg to Quimper in Brittany, we had ample opportunity to regret the new seating arrangements in the back. As Herself has grown taller, it’s not practicable to put her in the seat in the boot, so Michael was there and she and Daniel shared the back seat. This did not work well. A new, larger car is now on our list of desired purchases.

We swapped houses with a retired French couple. Their house was large and modern about 15 minutes by car from the centre of Quimper. It was set in about an acre; it was beautifully maintained and what they thought of our garden, I shudder to think. As ever in Brittany, the garden had a lot of hydrangeas and also a perfectly maintained vegetable garden with an ample stock of, inter alia, courgettes. I have to tell you that if I never saw another courgette, I wouldn’t care. 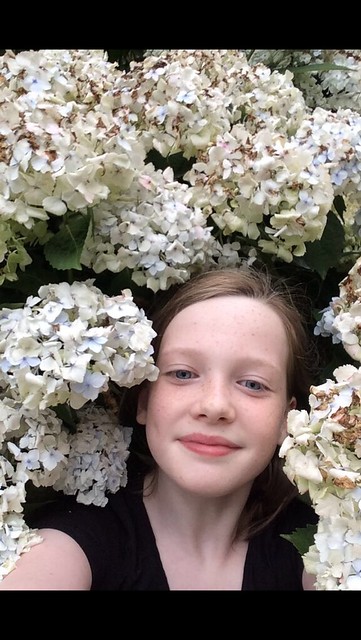 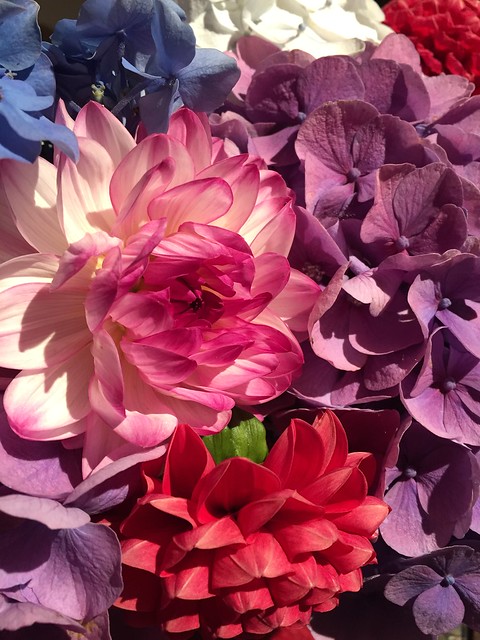 That Tuesday, our first full day in France, dawned damp. To their great chagrin, we dragged the children into Quimper in the afternoon and made them look at the cathedral and the Breton dancing outside.

Happily, our hosts had a subscription to Ouest France and every morning it arrived in the letterbox giving details of local events which would fill our children’s hearts with joy. It also gave death notices. I do love a good death notice (is this odd?). Bretons live long great-grandchildren filled lives. 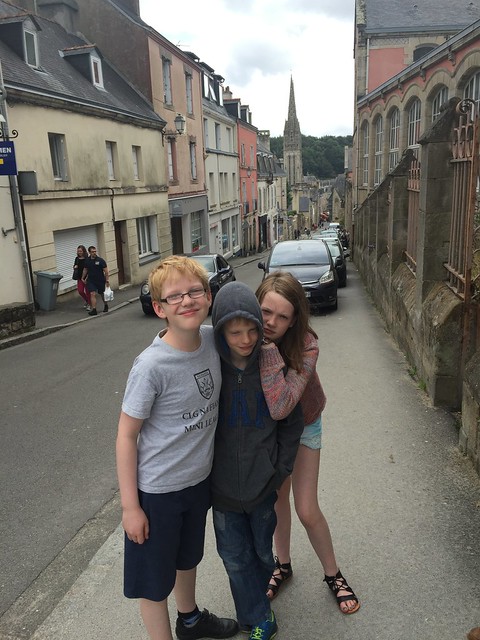 In an effort to divide and conquer the Princess and I went into Quimper in the morning while Mr. Waffle and the boys stayed at the house. This was moderately successful and she and I enjoyed lunch and wandering the quaint streets of the old town etc. We lunched overlooking the river and I commented to Herself that there were a lot of fish in the river (there were) and wasn’t it odd that that white one seemed to be tying to swim upstream unsuccessfully when all the others were going downstream. “That’s a plastic bag trapped under a rock, Mum.” Truly, middle age is full of indignities. 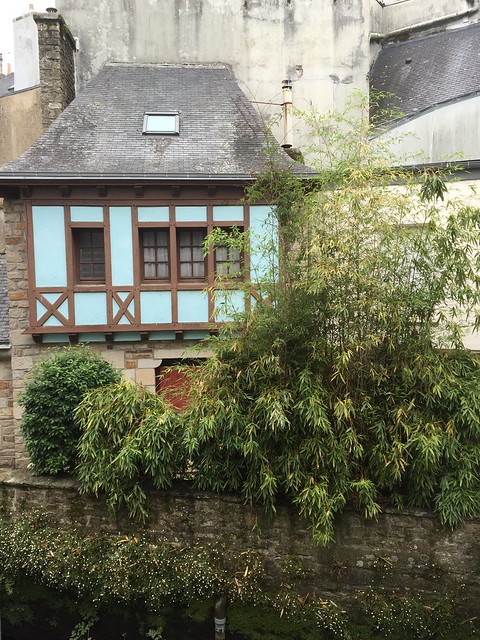 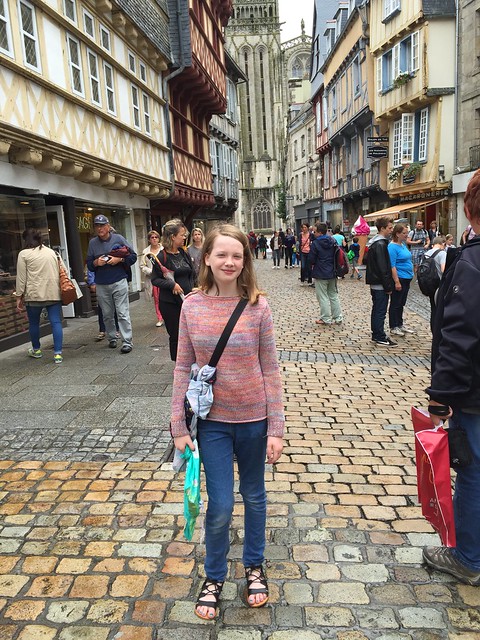 That evening in an effort to ingratiate ourselves with our children, we went to the funfair outside the town. It worked. 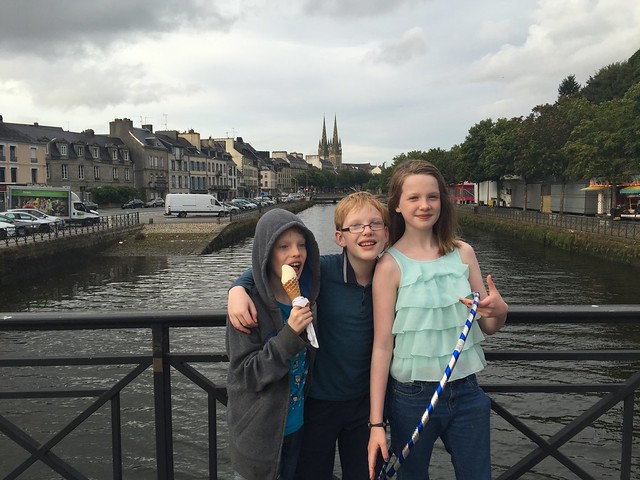 That afternoon, I had opened a cupboard in the French people’s house to find a towel and this is what met my startled gaze. I hope and pray that they never opened our hot press. I suspect not as we returned to find it in the state we left it while the toolbox had been meticulously reorganised (they fixed a number of minor snags around our house for their own obscure reasons – whatever the reasons, it was a very welcome development). Are everyone’s presses like this? 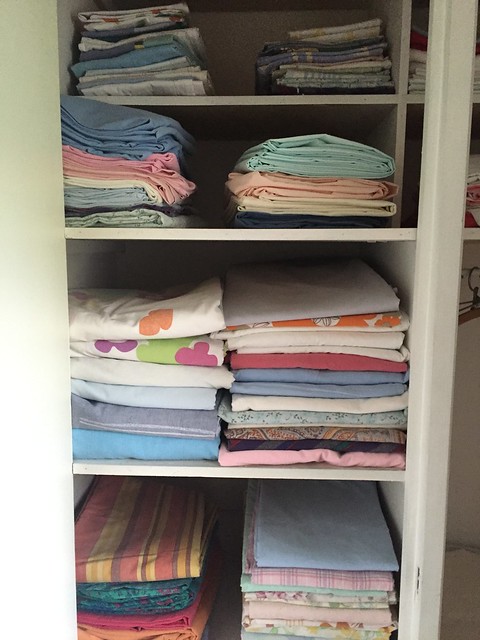 Hands up, if you iron your sheets.

Mr. Waffle and I made a daring expedition to the Musée des Beaux Arts leaving the children alone in the house. Aside from the mild feelings of guilt, it was excellent all round. The local gallery had a lovely regional collection in its own right and was also hosting an exhibition of self-portraits from the Musée D’Orsay. Insert here some hand wringing about the quality of galleries and museums in Ireland in small regional towns which compares poorly with the equivalent offering in France. The children relaxed at home. 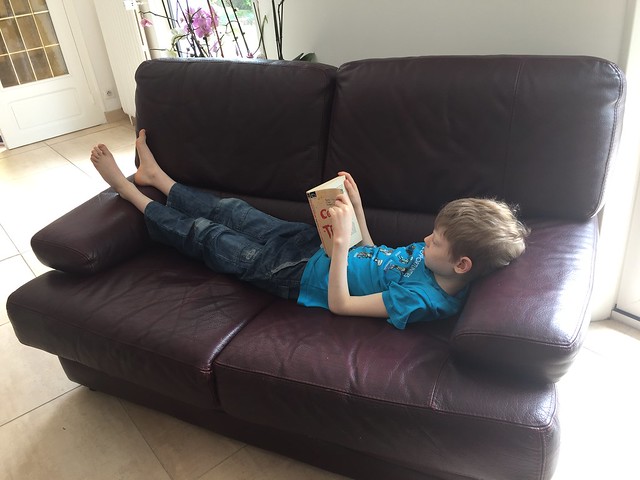 That afternoon we inspected a babysitter who was going to mind our precious children while we went out to dinner. She was only 16 so she brought her father to inspect us. We gave them some courgettes and she told us that her rate was a very reasonable €8 an hour and we struck a deal for the following evening.

That evening Herself made us mussels for dinner with crêpes for dessert. We had splashed out on a crêpe frying pan and associated wooden utensils and we were keen for her to test them out. Frankly, money well spent. 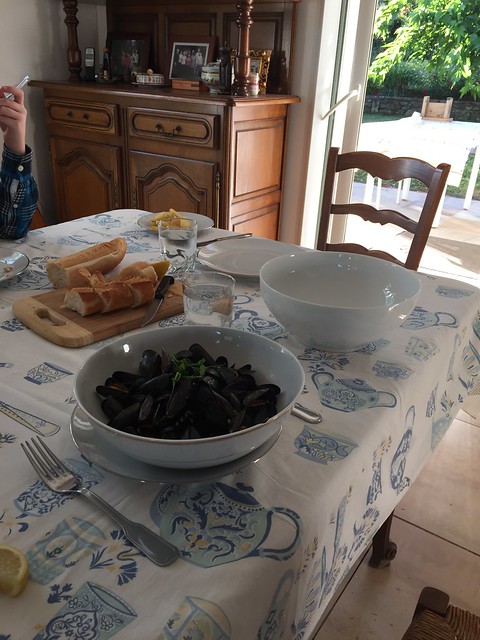 This was our first day to visit the beach. We went to Bénodet which is an appealing little town. The beach is always a bit challenging because Daniel and Mr. Waffle don’t like it, Michael is mildly in favour and the Princess and I love it. So, it’s all about compromise and brief dips rather than lengthy stays. 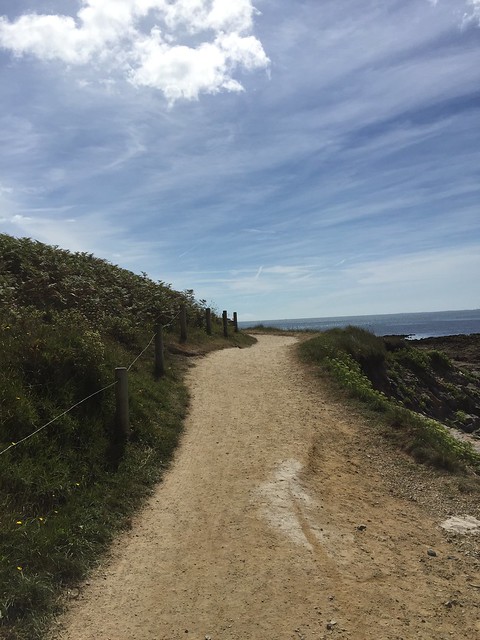 To help Daniel, in particular, recover from the trauma of going to the beach, we went to a campsite/outdoor entertainment spot where they offered a zipwire and sundry ancillary attractions including a long groundsheet covered in water and soap along which the children sped on their stomachs. More entertaining than it sounds. 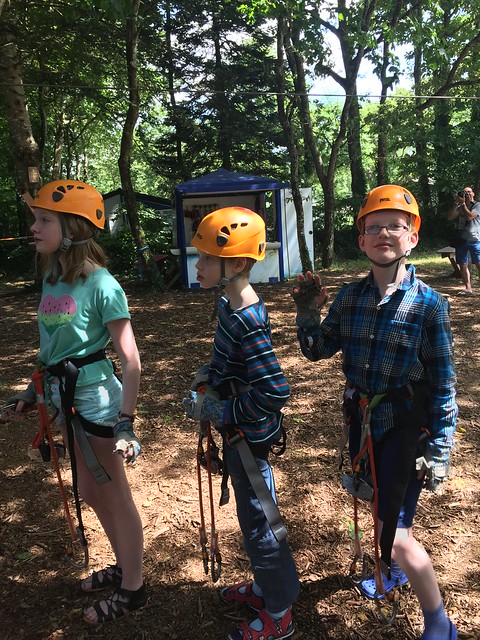 That night, leaving the children in the care of Manon, the French teenager, we took ourselves off to Pont Aven for dinner in a lovely restaurant where we have been before. We were celebrating our wedding anniversary and the sale of the old house and being on holidays.

When we got home, all was well and we went to pay the 16 year old babysitter €32 for the four hours she had held the fort. There had been a misunderstanding, she intended a price of €8 per hour per child which is standard in France. I have had a lot of babysitters in France and this is not standard. People, that was €24 an hour so €96 for the night making it the most expensive babysitting we have ever had; this for a teenager who lives at home with her parents in a regional French town. And it’s not like the children are hard to mind at this stage; they read their books, they put themselves to bed. I was fit to be tied. We handed it over AND I gave her a lift home AND more courgettes. Between dinner and the prohibitive babysitting, it was undoubtedly the most expensive evening we have ever had.

I woke up, still outraged. Brave Mr. Waffle rang the rapacious babysitter and said that we didn’t need her to come the following week as it was just too dear. She said that she had done some further research on rates and realised that a sliding scale would be more appropriate so that she would only charge €60 for each night so next week we would only need to pay her €20. With some reluctance, we agreed. Even writing about it now, I still feel stung. And she seemed like such a nice girl.

After dealing with the babysitter, Mr. Waffle further displayed his nobility by going to the beach again. Afterwards, we went to Île Tudy which, despite its name, is not an island but a peninsula and an appealing place to watch the world go by. 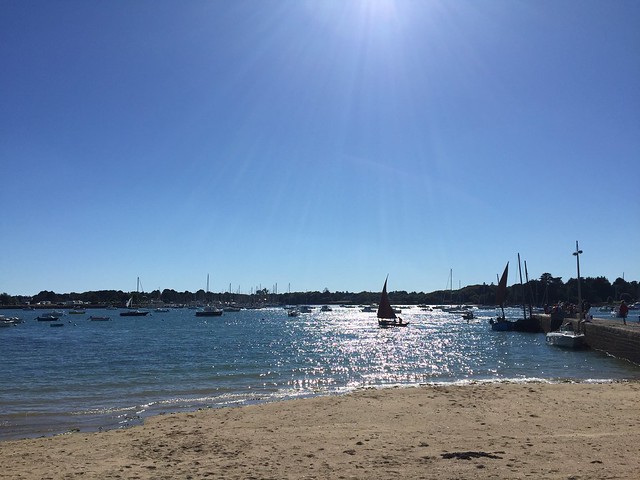 That night we had our greatest success of the holiday. Ouest France had informed its readership that there were to be fireworks in town at 10 that night. Despite the fact that it was late, we decided to go. The fireworks started 45 minutes late and the Princess’s watch fell into river so things were not exactly auspicious at 10.45 but once the fireworks started, the children were completely entranced. They absolutely loved it and I think they will remember it forever. And then we wandered back to the car through the old town and it was all quite lovely.

We went to mass in the cathedral. It lasted 75 minutes and used up most of the world’s incense reserves. And it was in French. It would be useless to deny that the troops were restive. In the afternoon we took them to a medieval fair (thanks Ouest France) in Pont Croix which is a beautiful little town. I can’t deny that I had hopes. However, the medieval fair took place in a field outside the town which, I have to tell you was not precisely what I was expecting. They’re raising funds to build a medieval village but so far all they have is half a house and a couple of tents. 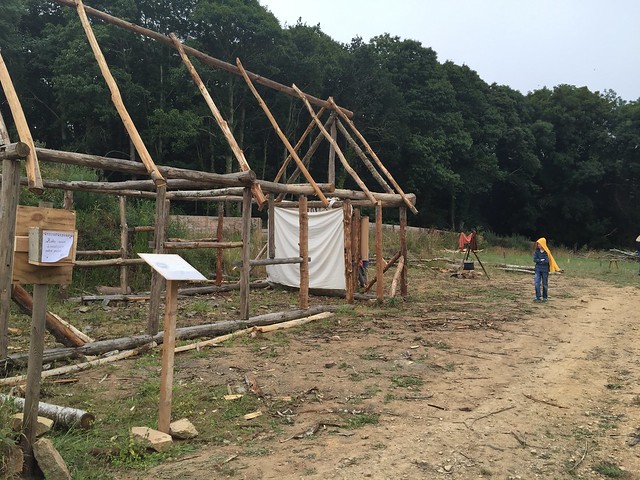 And it was raining. Michael said, “I told you so.”

Actually, it wasn’t too bad in the end. There was calligraphy, medieval games (as exciting as you might imagine but, any port in a storm) and a goose hissing at a donkey. At times like this, you take your thrills where you can. 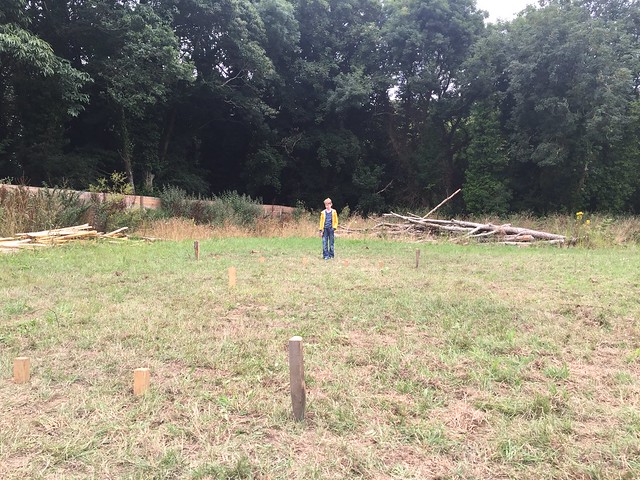 We went into the town for pancakes afterwards, it is still very beautiful and strangely empty. There was a brocante and we bought some tat. All quite pleasing. 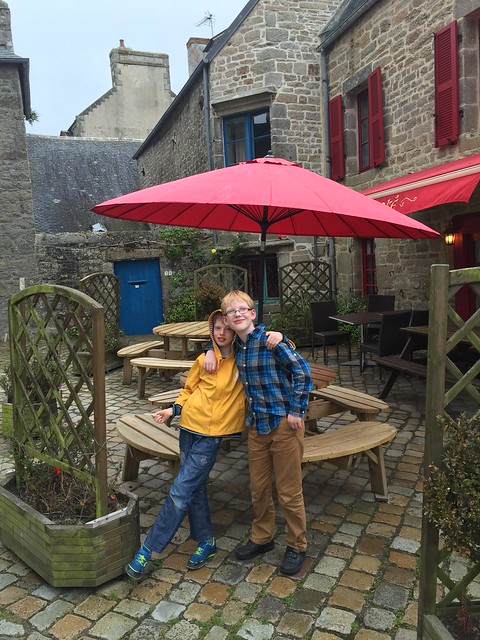 Tune in soon for week 2.