Today is the last day of Christmas. Christmas was good and really long this year because of how it fell, I was on holidays for nearly a fortnight. Hurrah.

Our advent calendar went missing mysteriously and despite extensive searching could not be found so our Christmas season began with the week long steaming of the pudding: 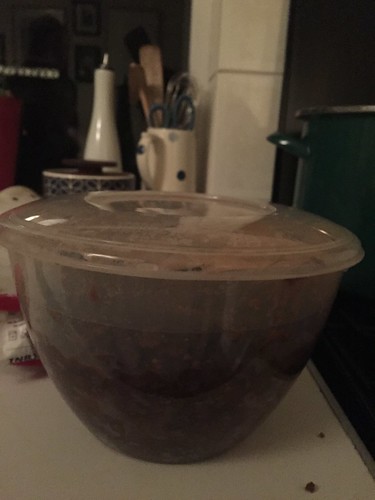 This was followed by the arrival of Saint Nicolas. To be honest, Mr. Waffle and I were pretty sure that he would not come to people who left Belgium more than 8 years ago. We were so wrong. 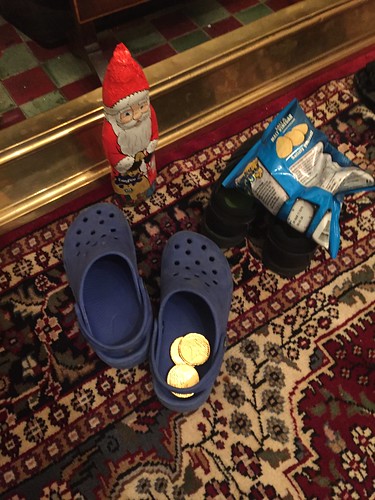 We got the annual Christmas magazine from school – same as the one I got 35 years ago but they’ve updated the graphics: 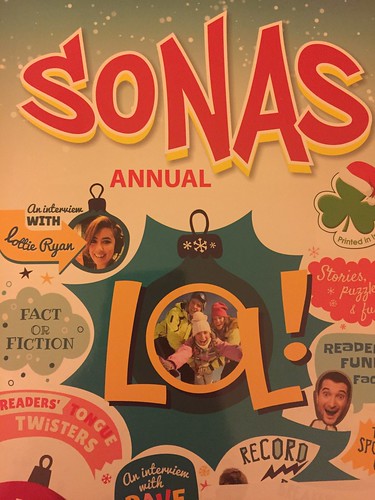 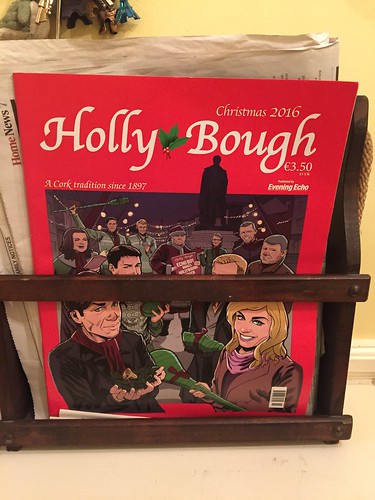 We got the bumper RTÉ Guide: 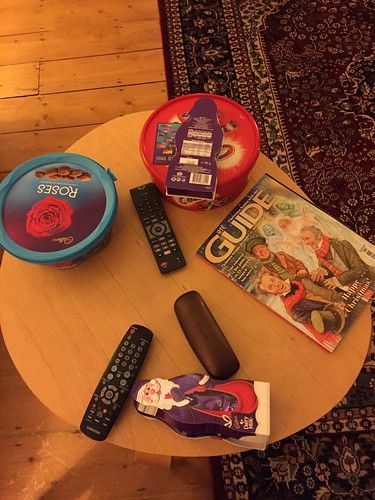 We put a wreath on the door. 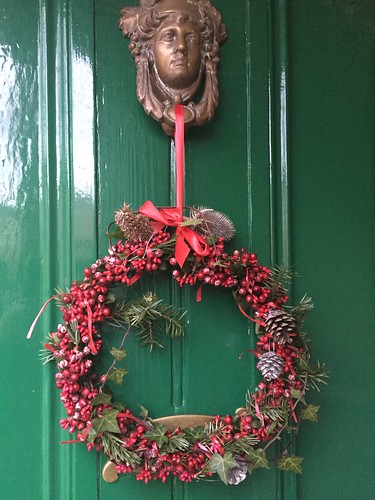 Then we got the tree. 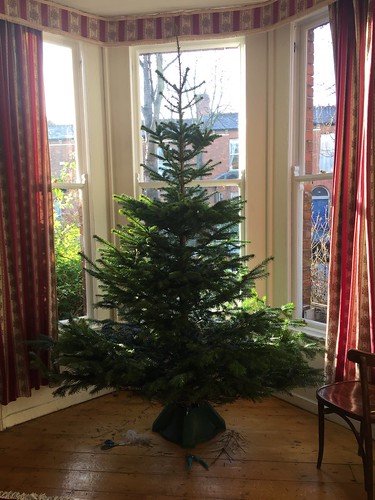 Daniel and I decorated it. 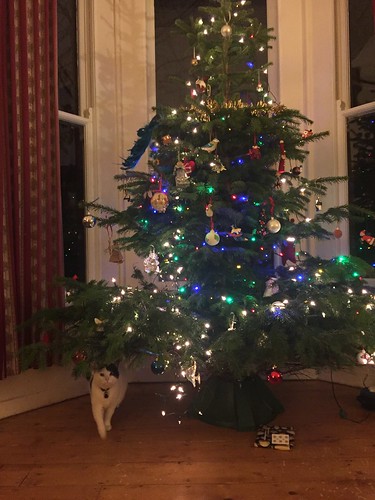 We saw Santa at mass the Sunday before Christmas – he was in mufti – he gets a lot of work locally and covers the boys’ school. At the sign of peace, Michael was quite startled to see him in the pew behind us but Santa, showing great composure, raised his eyebrows and put a finger to his lips. Michael was charmed.

We had a furious round of pre-Christmas activity. I took a day off work to get my Christmas shopping done. Don’t mock. That morning Mr. Waffle had a meeting he couldn’t miss. Inevitably, both boys were sick. I spent the morning minding them until the secondary school rang to say that herself was sick also. I left the boys in their sick beds and, as the car was in the garage, took a taxi out to rescue my poor sick child (on the plus side it gave me the opportunity to verify that the Princess’s bike was in the school bike shed as suspected and not, in fact, stolen from our garage like the last one as we had feared – there had been a certain amount of driving in and out to school due to wet weather and the pathetic time she arrived home bedraggled and damp and her heartless parents felt bad and we had slightly lost track of where the bike was). At lunch time, Mr. Waffle relieved me from duty and I went off and bought everything in the afternoon. It just shows, it can be done.

The boys had their Christmas play which was Charlie and the Chocolate Factory. Daniel was Charlie and he was terrific. Michael was Slugworth. He was also terrific. I was very proud, my sister came up to see them and she said they were marvellous and, unlike me, she is completely objective. In drama class, Michael got to star as Scrooge in “A Christmas Carol”. It went very well but Tiny Tim’s leg accidentally fell off. There was a Christmas concert in the Princess’s school; there was also a carol service in the church near the Princess’s school. The Princess sang at both. I recorded her singing the song at home so that I could dazzle you with her general amazingness but she is not keen to share it so you will have to imagine it. There was also a carol service in our local church where both herself and Daniel sang (not a complete success as she was exhausted after a sleepover the night before and Daniel was sick). And we had some neighbours and friends around for Christmas drinks. We watched “A Muppet Christmas Carol”; in my view by far Michael Caine’s best film. And then constant work parties, lunches etc. It was quite the whirlwind, I can tell you. I can almost sympathise with the teacher in the Princess’s school who hates Christmas and wants them all to know about it; an t-Uasal Ó Grinch as he is known.

By Christmas Eve I was a bit flattened. Nonetheless I was up early getting cranberries in the supermarket (I blame the Americans, when I was a child there were no cranberries and we got through Christmas fine). Then I went to the butcher’s to get our Christmas turkey and spiced beef. There was an enormous queue and the staff were plying Christmas punters with tea and coffee during the wait. Text received from herself during the waiting: “When will my mother return from the war?” When I got back, we took ourselves off for a walk in Wicklow with a picnic lunch. It was cold but, crucially, it did not rain. 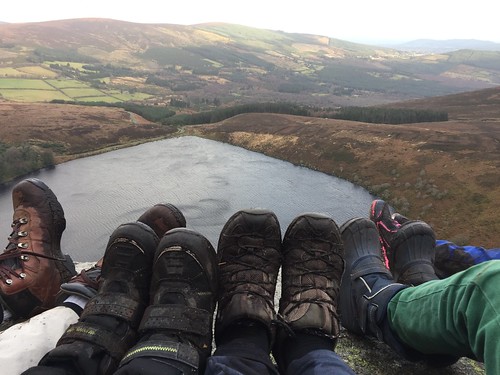 And then we went to midnight mass (starting at 9, confusingly) where there was beautiful music and herself got to carry the baby Jesus to the crib and none of the children collapsed from exhaustion. In fact so lively were they that Daniel arrived downstairs at 12.30 for a chat which was quite the surprise. 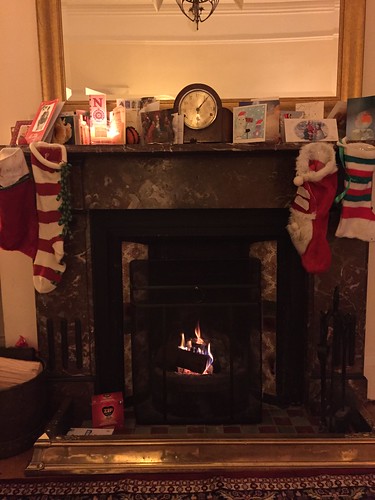 The next day, we had Mr. Waffle’s family for Christmas- 8 adults and 5 children including ourselves. I was quite nervous about the quantity of food that needed to be prepared but it was grand and a good time was had by all etc. At least I hope so, they ate it anyhow which is crucial when you bring a turkey into the house.

As is tradition, we went orienteering on St. Stephen’s Day and for the first time ever, I think, it did not lash rain on us. 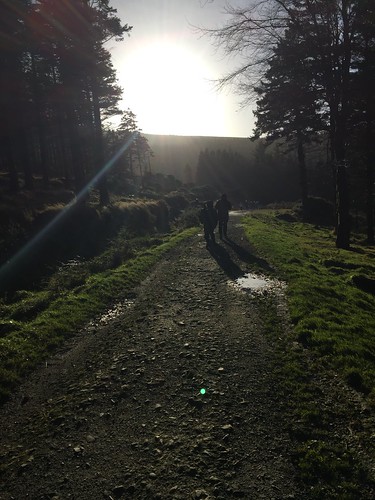 The next day we headed to Cork. As my mother always says, we travel light. Ahem. 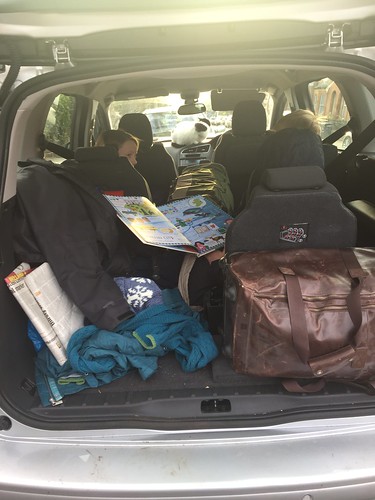 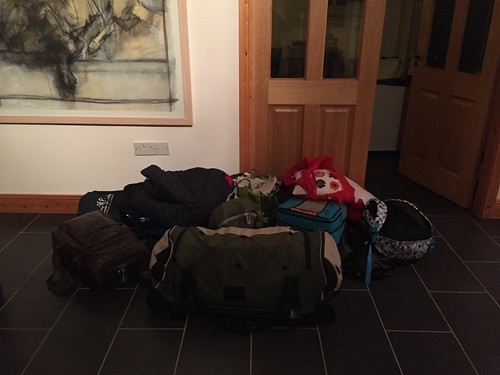 We stopped off at my parents’ house and hoovered up presents. It was like Santa all over again and then some. Then we went to east Cork where we often stay in my friends’ summer house – so often, that we now have our own key. Um, look they were in Spain, it was empty. They have very energy efficient modern Scandinavian heating which takes about 12 hours to warm up so we came prepared with hot water bottles for the first night but after that it was perfectly toasty – underfloor heating is where it is at.

They have no television and no wifi. We fell back on traditional entertainments. The boys made plastic models. 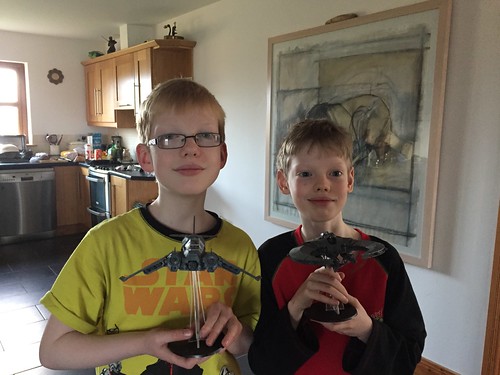 We attempted their jigsaw. Very hard. 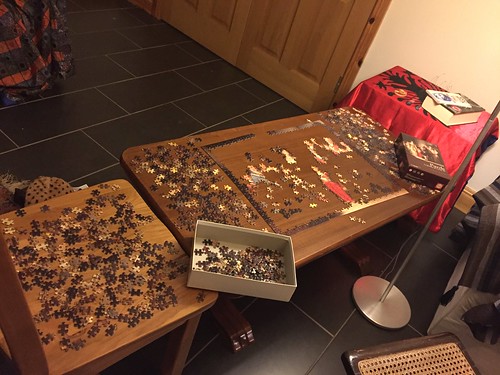 We went ice skating. We went to Fota Wildlife Park. I must say that all of these things are a lot easier when your children are 11 and 13 than when they are under 8. Although Mr. Waffle got pretty grumpy about the traffic in and out to Mahon Point for the ice skating. Do not go ice skating in a shopping centre at peak post-Christmas sale time was part of the message we took from that experience. 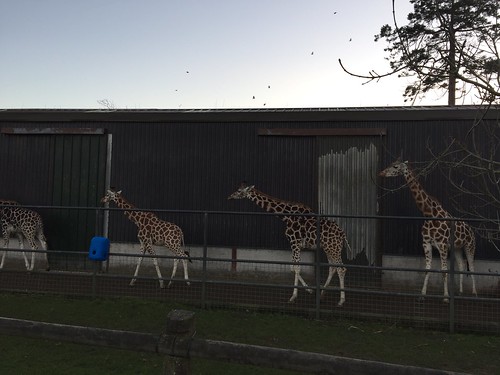 We went to visit second cousins in Limerick. We saw a ruined abbey. 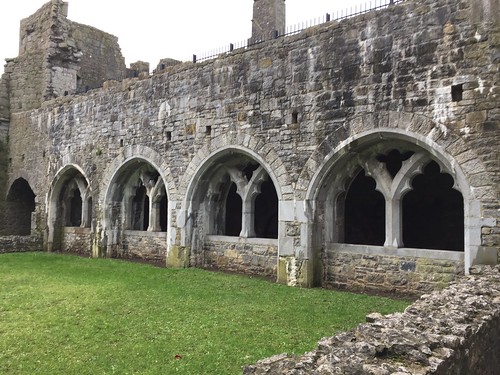 We were back in Dublin for new year’s eve. Mr. Waffle went to a party at a neighbour’s house but I was tired and stayed home and the Princess and I chatted. Mr. Waffle returned to join us just before midnight. We did some further mild relative visiting. I went to the sales. I took the boys to the dentist. We went for a lovely walk in Howth. 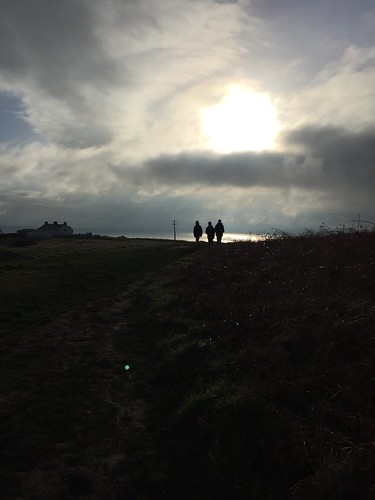 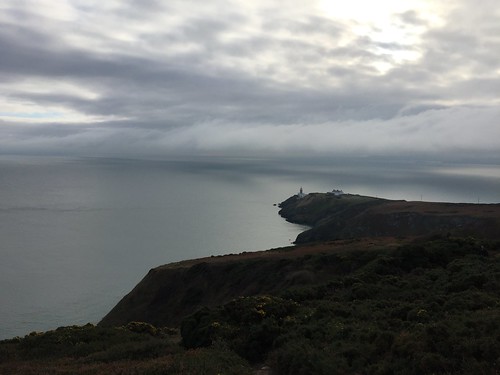 I went back to work yesterday and am slowly re-adjusting. Mr. Waffle and the children are still on holidays. Today is Women’s Christmas and Mr. Waffle nobly took the children out so I got back to an empty house – slightly thrilling. After dinner, I suggested that Mr. Waffle and the boys might clean up as it was Women’s Christmas and the Princess might be excused (I was the cook and so excused ex officio). The Princess was outraged by this blatant sexism when Mr. Waffle does just as much work around the house as I do (or, according to Michael, slightly more which I dispute but I don’t think Michael counts putting things away as work) and insisted on staying to help her father.

And now it is nearly midnight and the end of Christmas. Tomorrow we will be taking down the Christmas tree and the decorations. Alas. How was your own Christmas?