When we lived in Belgium, I used to occasionally buy and read “Royals” magazine. The clue is in the title; it goes large on the Belgian royal family but all of the European royals feature from time to time (the Grimaldis are my absolute favourites; what a family) and sometimes more exotic royals from Asia or the Middle East. I used to read it in a post-modern, ironic way and, because it’s in French, it’s clearly not the same as reading, say, “Hello” magazine which I am obviously too lofty to read.

Mr. Waffle goes to Brussels for work from time to time and on his return he often picks me up a (post-modern, ironic) copy of “Royals” magazine. Inspired by his success he got me a subscription to 12 months of “Royals” magazine last Christmas. I have to tell you I was not delighted, I felt I’d tipped over from post-modern, ironic to weird middle-aged Belgian royalist lady. Anyway 12 months later, my subscription has finally expired. If you need to know anything about the Belgian royal family, ask me now. While I have to say that I enjoyed it more than I expected to, I am glad to have reverted to being an occasional consumer of Belgian royal family news rather than the Irish expert on Prince Laurent’s latest quirk. 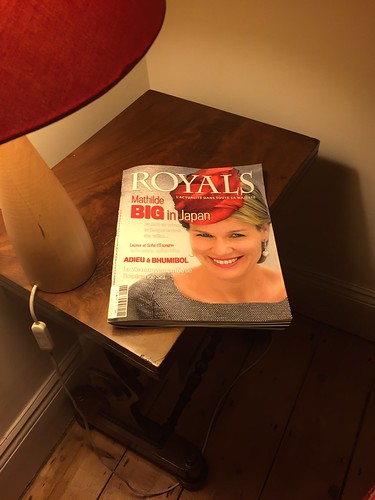