She wasn’t here, she was off on her French exchange in Paris. She’s only getting back tomorrow. It was her first birthday away from home. She seems to have had a lovely, lovely time. The French exchange’s mother is my friend who I lived with in Brussels for two years and who did more than anyone ever to improve my French by correcting me when I made mistakes (ideal French exchange mother material, you have to concede). Mr. Waffle and I attended my friend’s wedding in Normandy with herself, a 3 week old baby, in tow. So, we’ve known each other a long time and it is very pleasing to be exchanging our daughters. They pulled out all the stops and I am slightly dreading having their daughter E back in the summer as entertainment standards are high. Still we have a couple of months to plan. 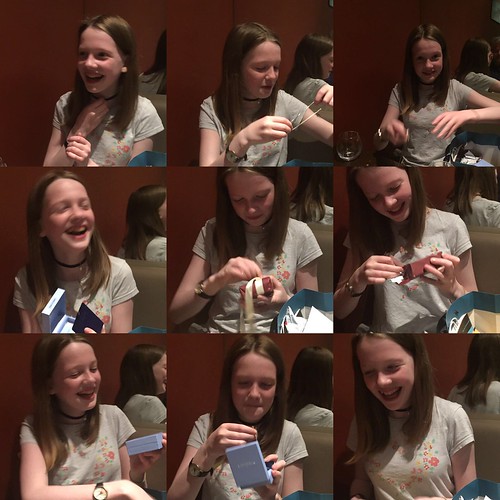 My daughter is a very independent 14 year old. She was away for a week at mid-term, away for 10 days now at Easter and is going away for three weeks in the summer. And she is on committees and teams and seems to be very engaged in all kinds of things. I rely on her school’s twitter account for details of her activities – she refers to it as a fifth columnist. When I did a traineeship in the European Commission nearly 25 years ago, there was a very bright, very competent, fiercely independent English girl who was one of our cohort. She was a friend of a friend and I remember my friend telling me that this girl had essentially left home at 15 winning scholarship after scholarship and entirely paying her own way for everything. It seemed, in some ways, a bit sad to me and the memory has stayed with me. Honestly, at one level, I feel that if herself had to leave home in the morning, she would be perfectly able to do so. I know the job of parents is to prepare children to live happy lives on their own but I’m a bit worried we may have peaked too early here.

School is going well for her. She’s always been very academic so that helps. But she has thrown herself into the “clubs and socs” end of things and is always staying late to do activities at school. As she cycles in and out, she’s very independent and we’ll often get a text message saying something like, “I’m not dead, I have just gone to [friend’s] house. Home later.” And that’s fine. She’s sensible and she’s reliable. And she seems to be doing fine socially though, of course, you can never really know.

She still reads everything and lots of it. Her interests are eclectic. She is fascinated by Jewish religious laws. She’s read a lot on this one. Apparently the rabbinical courts have turned their attention to what happens if a weasel takes bread from the house [the details on why this might be bad elude me] and she likes their attention to detail. She has me tormented on Catholicism and the rules which apply.  I have the shakiest grasp on this myself; this is not helped by her constantly trying to poke holes in my limited knowledge. I blame the internet for giving her the impression that the Catholic church is anti-science. The Church has many, many faults but that is not one of them.

She and her brothers are generally either at war or in a state of uneasy truce. I am hoping this will pass. They sometimes get on pretty well but that is mostly when they are jointly torturing Mr. Waffle and me and I am not sure that we are prepared to make the ultimate sacrifice for sibling harmony. 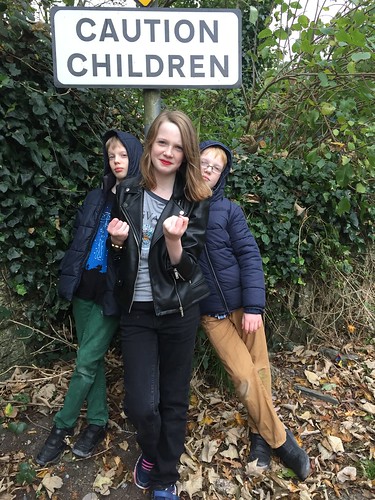 Instagram and snapchat are her social media of choice. She can leave email lying ignored for days but a snapchat question generally gets a (laconic) response. Can I just say that I hate using snapchat and it leaves me feeling old and baffled. This is what I get for being over 25, I suppose. Last autumn my brother and sister bought her a snazzy new phone. Prior to this, she had only been able to access social media through the school iPad which was deeply unsatisfactory for reasons I didn’t entirely understand. Our rule had always been no electronic devices in the bedroom but we dropped the ball here and since she already had her iPad in her room (for homework and – not authorised – watching Netflix) we just let her take the phone there too. We were only brought to our senses by the shared outrage and indignation of her brothers who are only allowed 20 minutes computer time per day. We said her phone had to stay downstairs. We survived it.

She still loves animals. She loves our cat. She desperately wants a dog. She is even fearless with the neighbour’s hens. 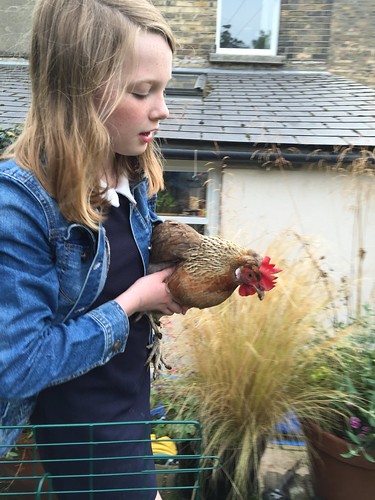 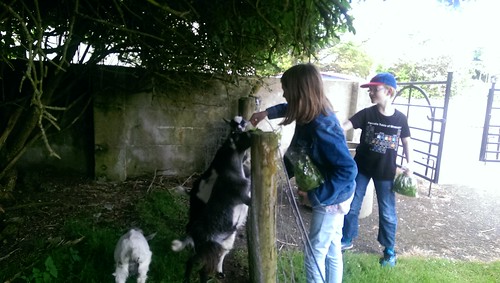 She is a terrific cook. She continues to use her powers for good and makes a range of cakes and buns for local consumption. She also makes great risotto. 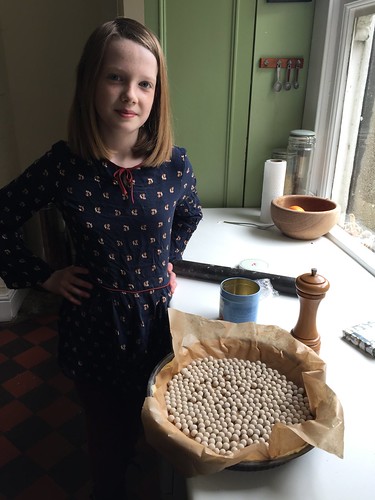 Her room is a fastness and woe betide any family member who crosses its threshold. It was very tidy there for a while last summer under the influence of Marie Kondo but standards have slipped a bit since August 2016. Still reasonably good though as I have promised to just march in there and start tidying up, if it gets too messy.

I don’t want to tempt fate here but all in all, things are very good. She’s happy, she’s settled in school, she has friends, she has lots of interests and things are going her way. There was a while last year when she was, I think, a bit miserable (based on a reading of signs, omens, portents, not any actual information shared, you understand), but that seems to have passed. She and I go out together a bit, to the cinema or to cafés and it is pleasant. I feel like time is racing away. They always say that children grow up very fast but this has not been my experience to date. Now, suddenly though, it’s like the end of the race is in sight and I’m not sure I am ready to stop running. 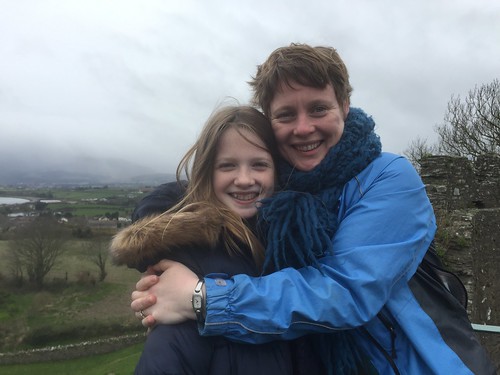