Mr. Waffle and I went out early for breakfast. And then we went for lunch to a fish restaurant in Montparnasse. We left the children to their own devices. Likely to be electronic devices, but we shut our eyes to this.

After lunch Mr. Waffle, the boys and I went to an exhibition featuring dragons. Herself drew the line at going and was probably right as perhaps not quite what she would have liked. It turns out that our sons know an extraordinary amount about dragon lore and given that they are, you know, mythical animals, it’s surprising how consistent their information was with that in the exhibition. It turns out they do learn something in those fantasy games. As my mother says, “Knowledge is never wasted.” Though I am not sure that this was what she had in mind. 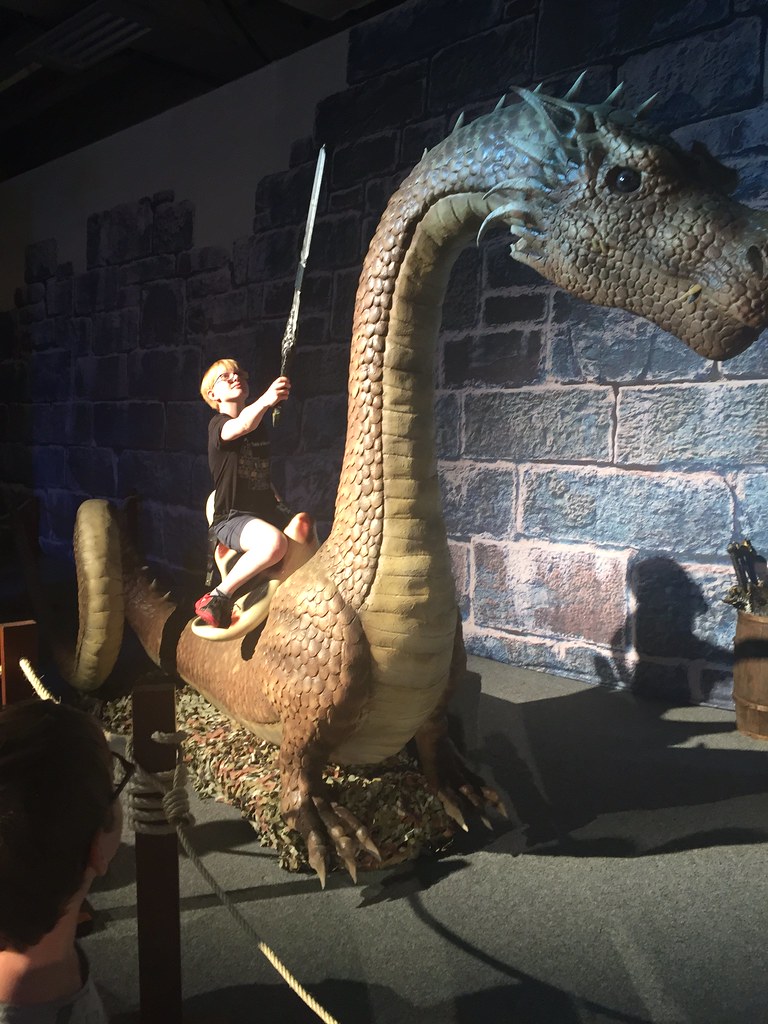 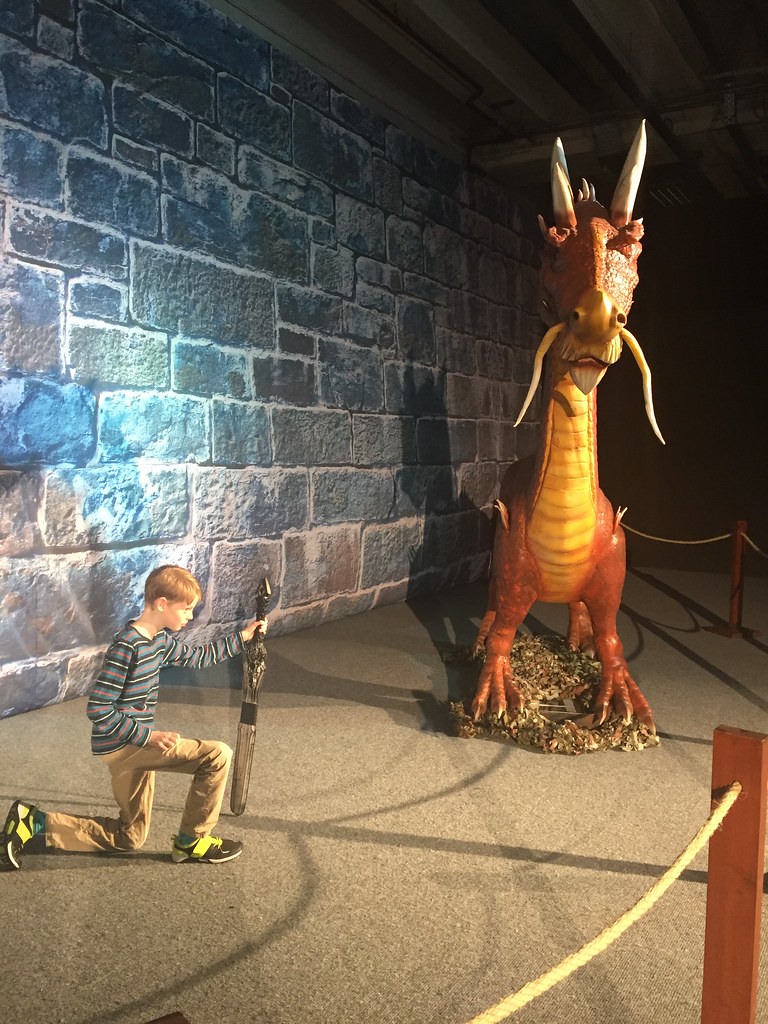 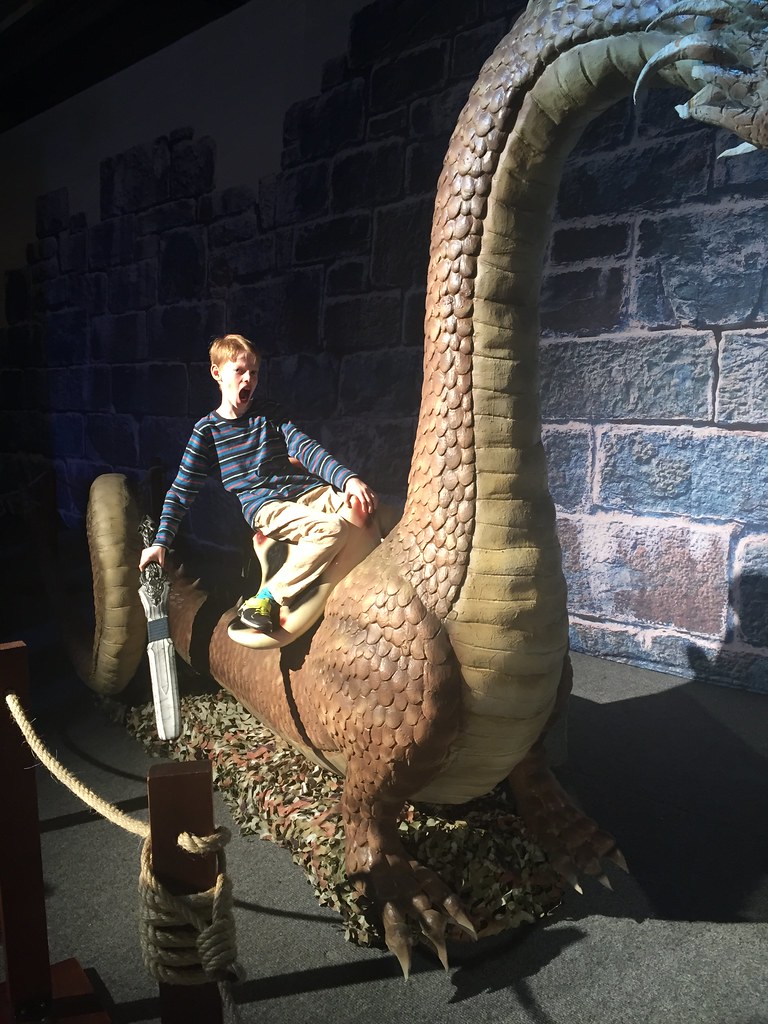 On the way home, we passed a group of boys playing football on a concrete pitch near our house and Daniel asked if he could join them. Off he went and I sat nearby watching the whitest boy in Ireland playing with 9 black kids from one of the more exciting Parisian suburbs. But Daniel was delighted with himself and they were very nice to him. I chatted with a 5 year old who was watching his elders and told me who everyone was and where they lived (large block of flats across the road) and also that he, the five year old, had just got a new cousin. I told him that Daniel had a new cousin too. “But my new cousin is in London,” said he. “So is Daniel’s!” I exclaimed and we sat there and marvelled at the delightful coincidence.

In one of the papers there was an article about the new French equality Minister who had fought her way up from one of the rough suburbs to Ministerial glory. “Which rough suburb?” you cry. Ah, Malakoff, of course. Maybe it was rougher when she was young but I didn’t think it was too bad at all.

Herself and myself went back into town. We had breakfast together. We also went to HEMA. I love HEMA but this was not an optimal HEMA and I feel she still hasn’t appreciated its true wonderfulness. It’s a Dutch shop which is also in Brussels. I still have loads of stuff that I bought there years ago which has stood the test of time despite it’s cheap and cheerful ethos. 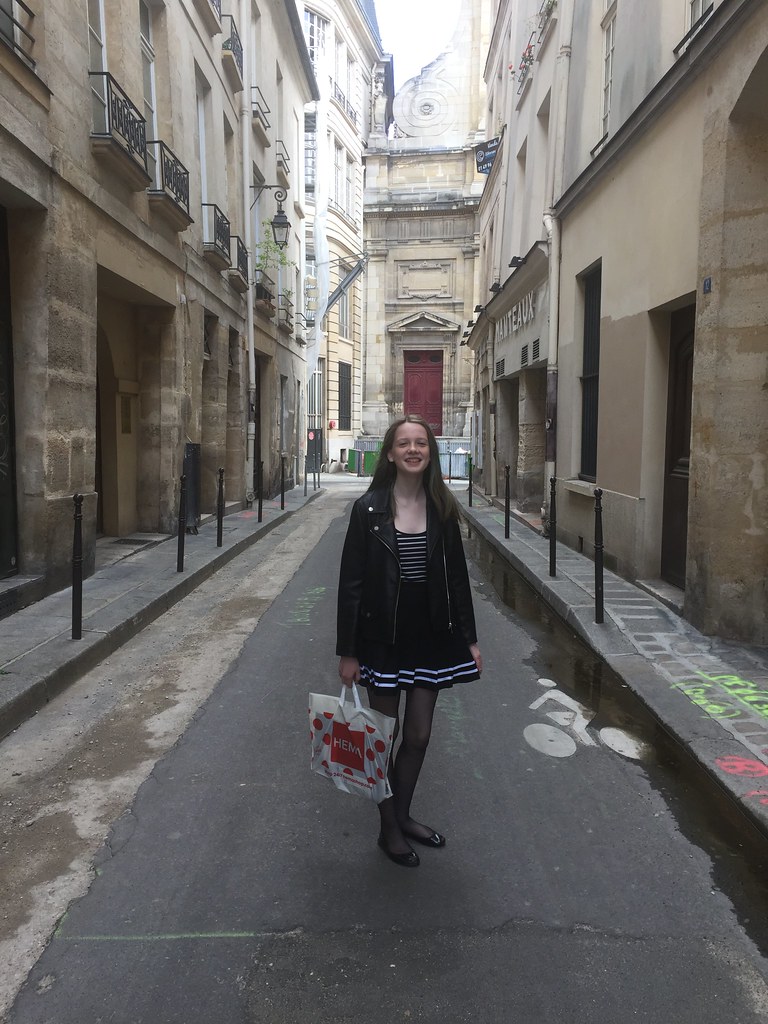 She spotted some cute bollards. 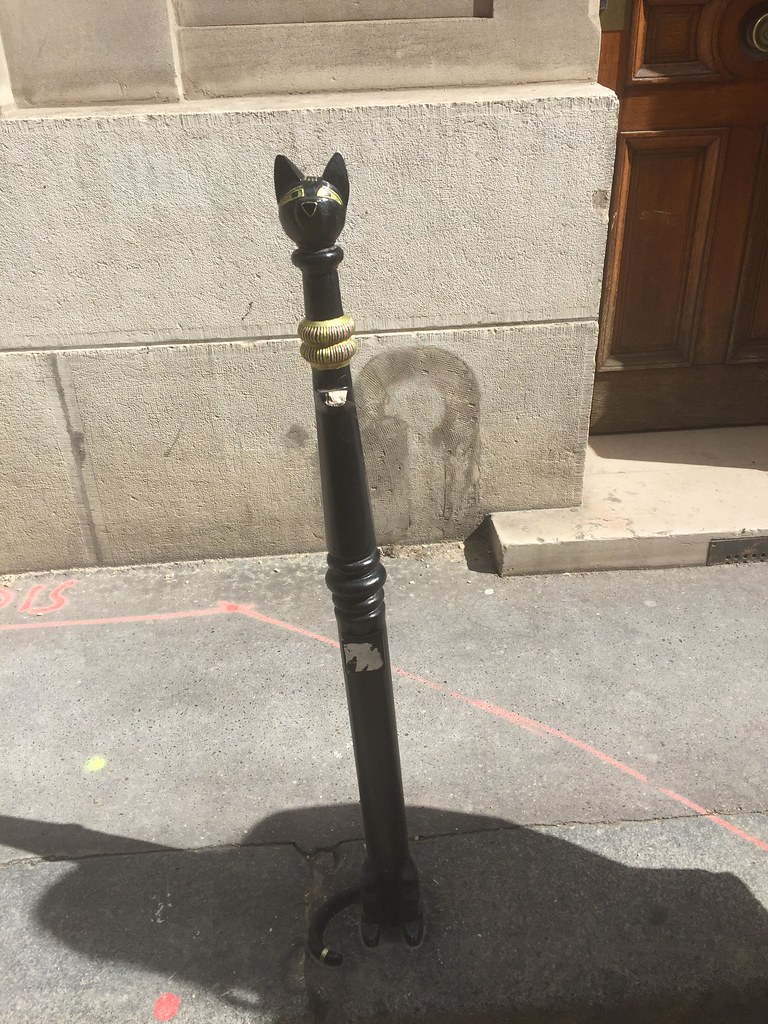 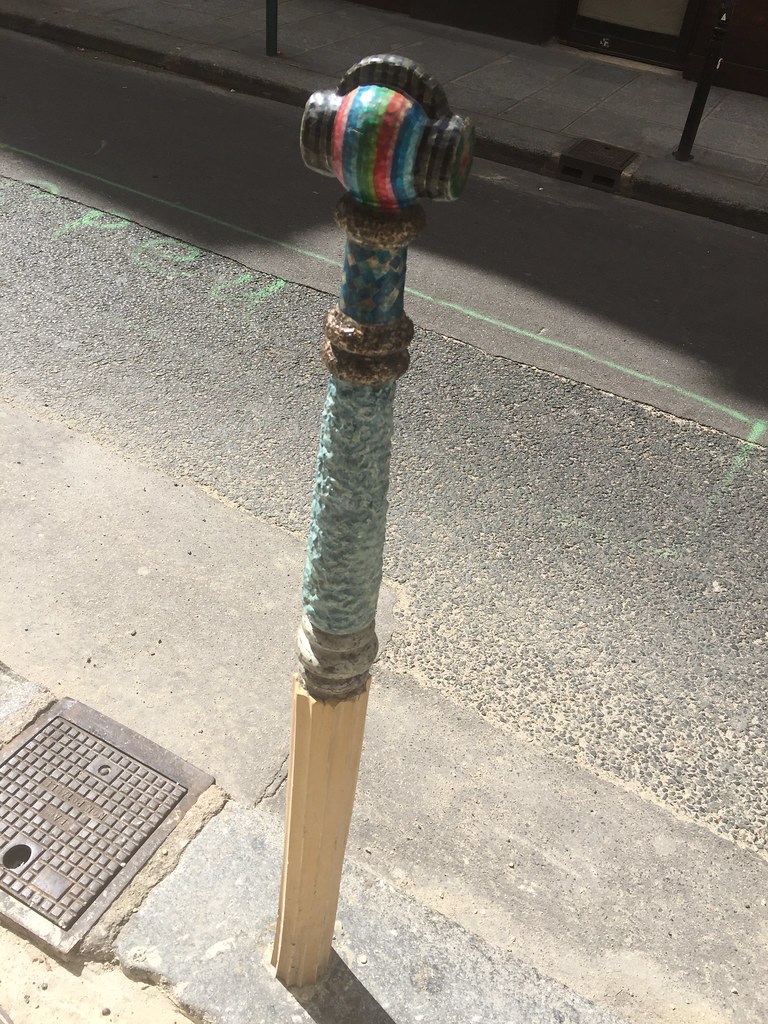 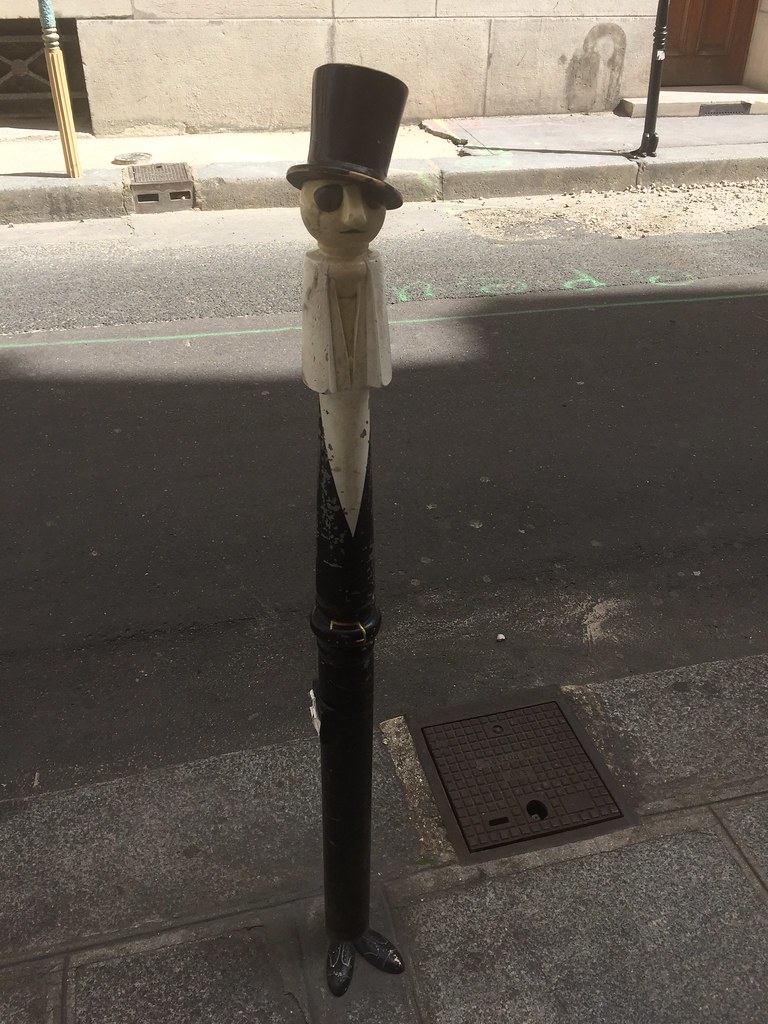 She’d been keen to go to the Monoprix for a while and we finally went. Fantastic, I have taken to the Monoprix with the zeal of the convert. We even got the boys’ school tracksuits (plain navy, no logo on pain of death, impossible to find). Then we went to Mariage Frères and I bought some very expensive Earl Grey and confirmed what I had heard from another expensive tea merchant that Lapsang Suchong is now no longer available. The woman behind the counter was a bit cagey about why EU regulations banned it but I feel I now have a complete explanation for Brexit and post-2019, I guess we all know where we can go for our illicit Lapsang.

We went to Place des Vosges for lunch. 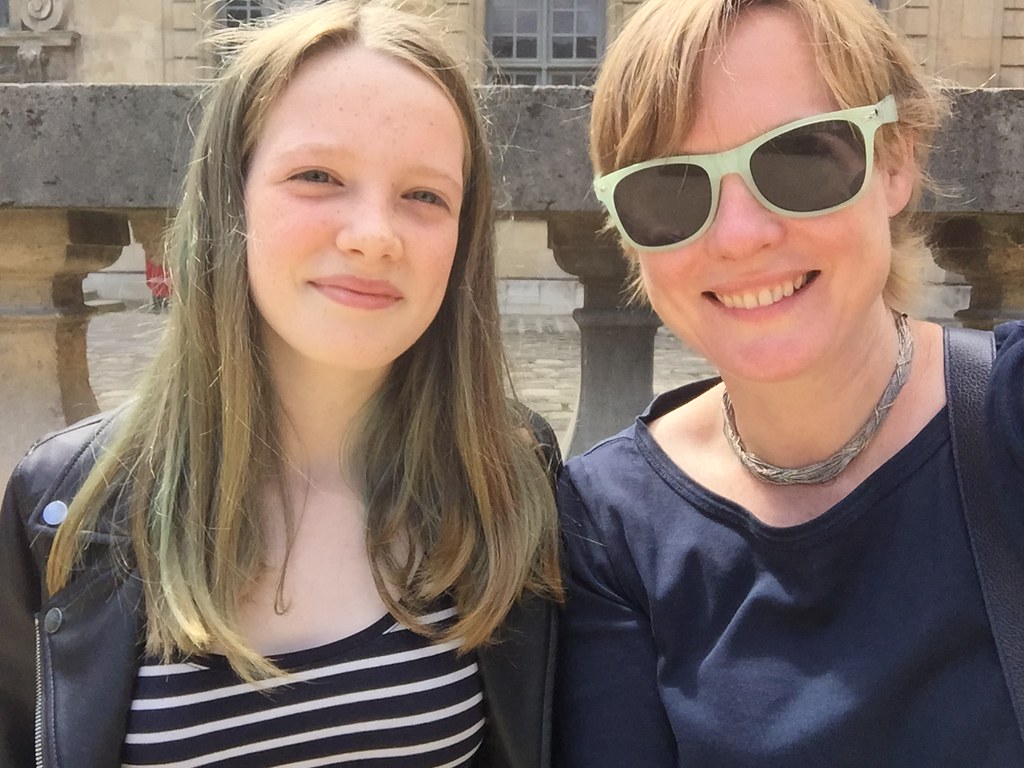 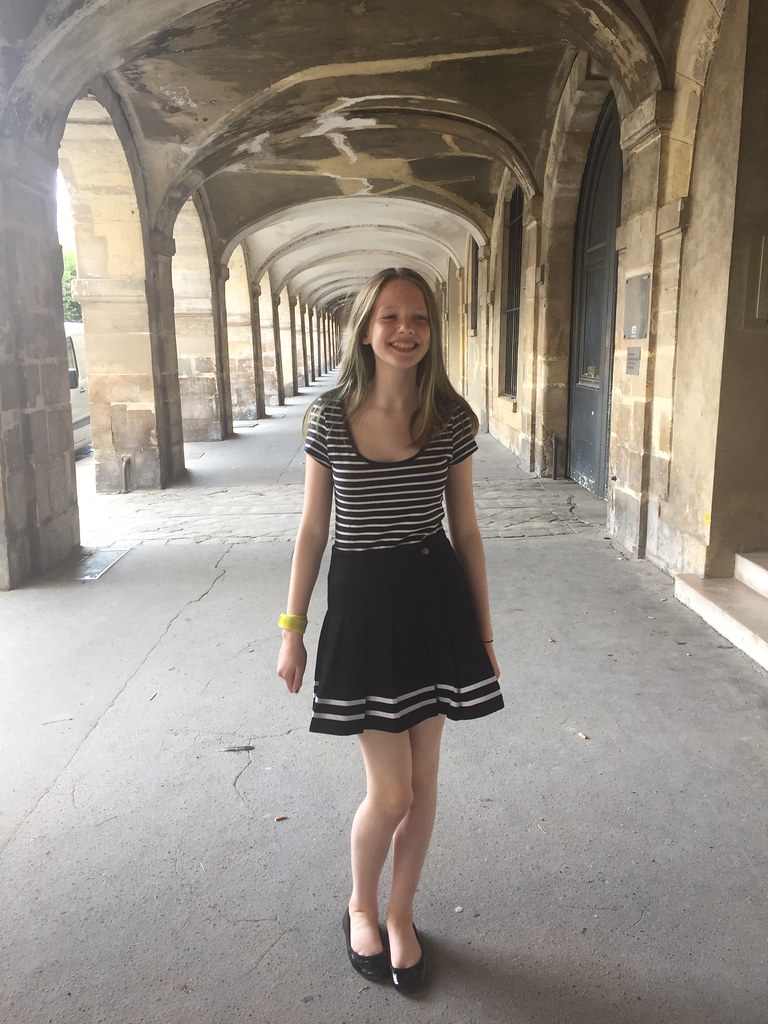 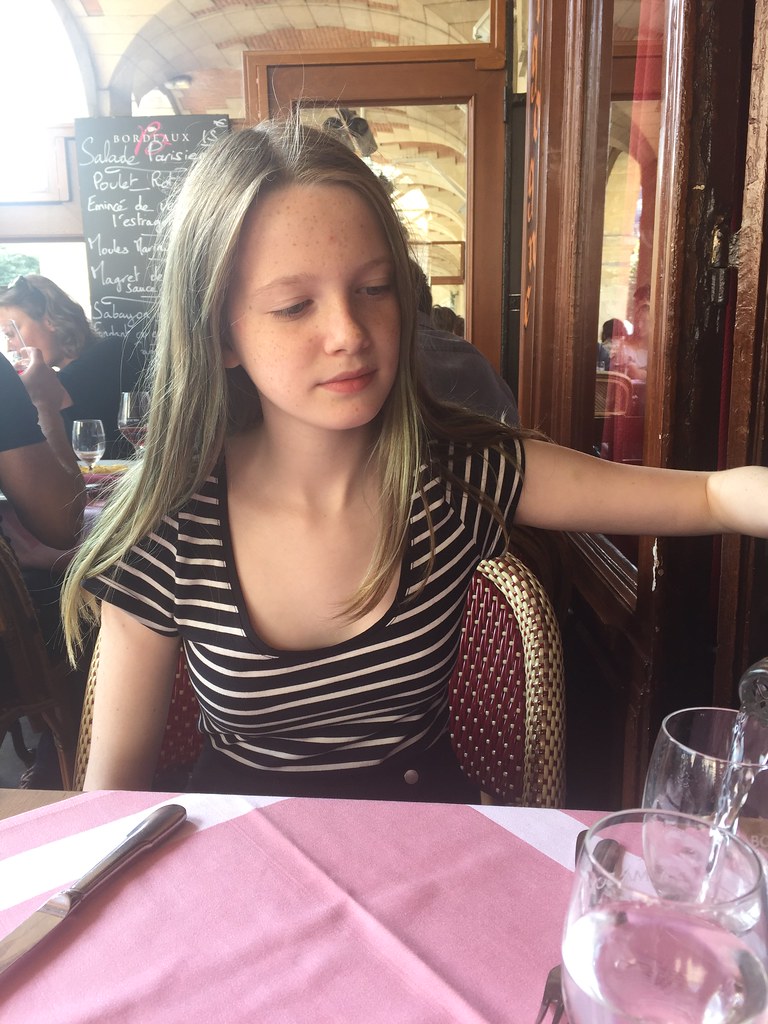 Food was a bit indifferent but the setting was delightful.

After lunch we went to get the metro home. When we got there, the metro station was closed and two policemen with semi-automatic rifles were standing at the entrance while Parisians hung around impatiently. I suddenly felt a bit nervous and I said, “Let’s get a taxi.” It was a bit depressing and I suppose it was nothing really but I was definitely unnerved. Our taxi driver home was full of personality he had views on big pharma (against), tourists in August (for, numbers back to normal this year as I knew to my cost), terrorism (against), Mélenchon (strongly for) and cyclists (against). It was a long journey.

When we got home, Mr. Waffle asked whether I wanted to go out on the electric bicycle to the Monoprix. An irresistible combination of thrills. Sadly, I am not even being sarcastic here.

Later in the evening, Dan went out to play football with his new friends and the rest of us went to the local pub for an aperitif. 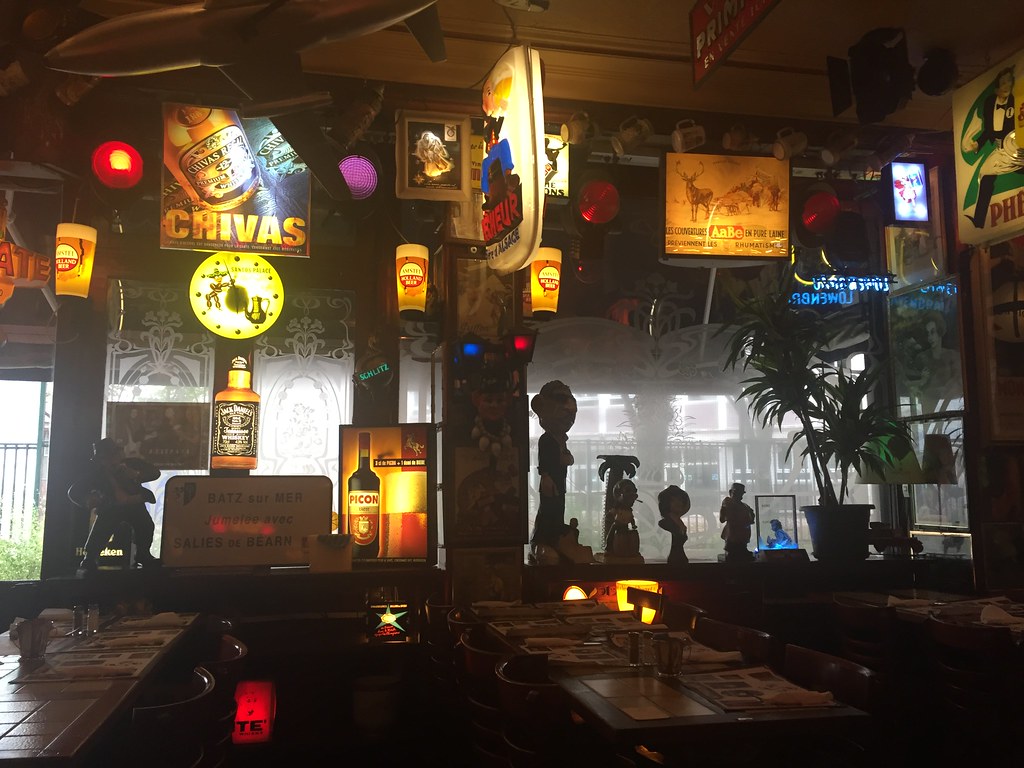 The credit card company called me to say that my card had been compromised. Alas. It was compromised in an unlikely way. About €50 spent in a suburban Parisian DIY shop. Not a credit card fraudster who thought big. I went back to the house with herself and later was able to send her out for the others saying in a timeless fashion, “Tell your father and brothers to come home from the pub.”

That evening we searched for a film we could all watch. We made them watch “Four Weddings and a Funeral”. It was a surprise success everyone was amused; it stood the test of time really well though I still think Andie McDowell is dreadfully miscast and there are some ethically dubious choices which I felt it was hard enough to explain. However, I covered up by saying things like, “Is that Mr. Bean?”

We went to mass in Saint-Germain-des-Prés. The priest said we were all so lucky to be in this beautiful church but since most of it was shrouded by sheets and scaffolding, it was a little hard to agree. He said a good long mass including singing the gospel which is not something I’ve ever come across before. Clearly not catholic enough.

We had lunch nearby and then had an exhaustive search for an open pâtisserie. In the course of our search, a very kind woman, who led us to the only open pâtisserie in Paris asked Mr. Waffle whether he was Belgian, because of his accent. I love the Belgians, but that’s not what you want to hear. We went for afternoon tea, with the cake, at my friend’s house. She and her family had just come back from a holiday in America the previous day but they were ready and, apparently willing, to have us round. She and I shared a number of flats together in Brussels years ago and we are now exchanging our daughters on a regular basis. She lives in the 16th which is leafy and beautiful, though pretty quiet in August. 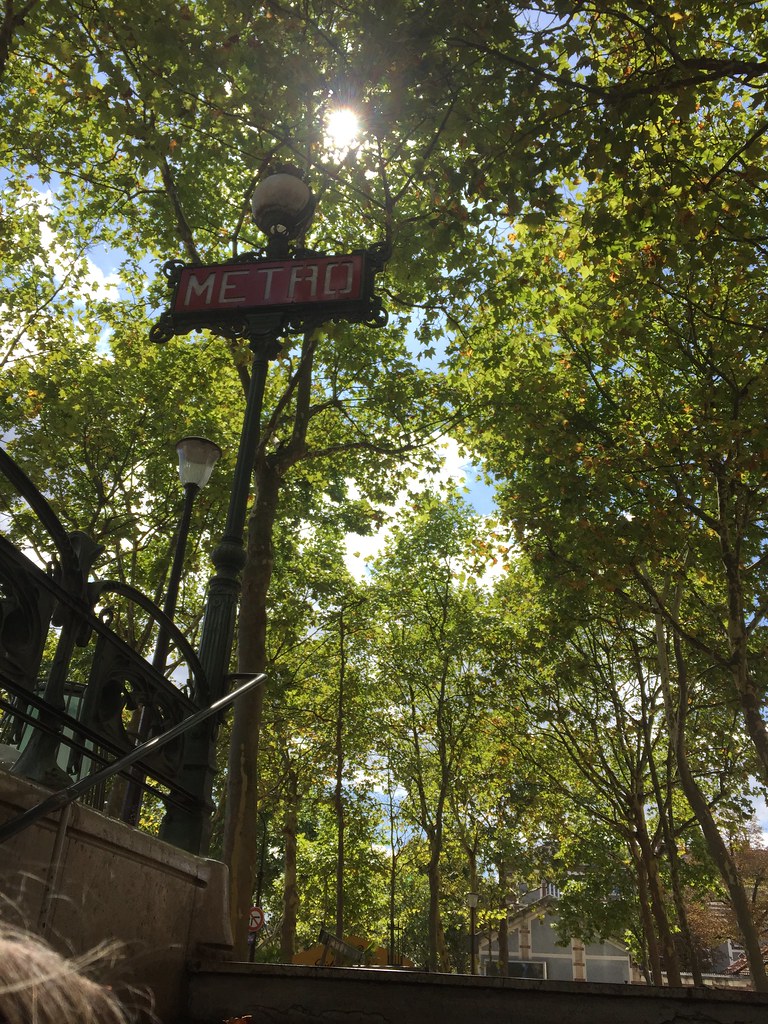 I was dying to see her flat and I was not disappointed. It is just beautiful. Parquet everywhere, big beautifully decorated rooms in an old residential building. Her children 13,11 and 9 got on reasonably well with mine. 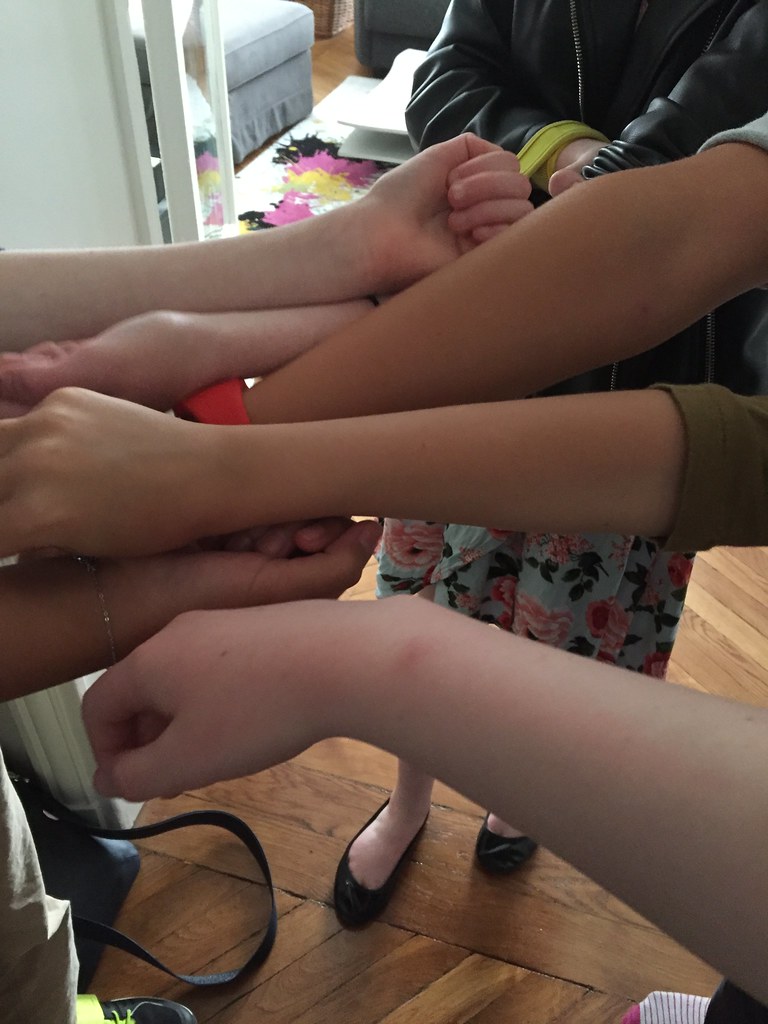 We had tea and then we went to the park where the children played and the adults caught up on all our news. It was lovely. 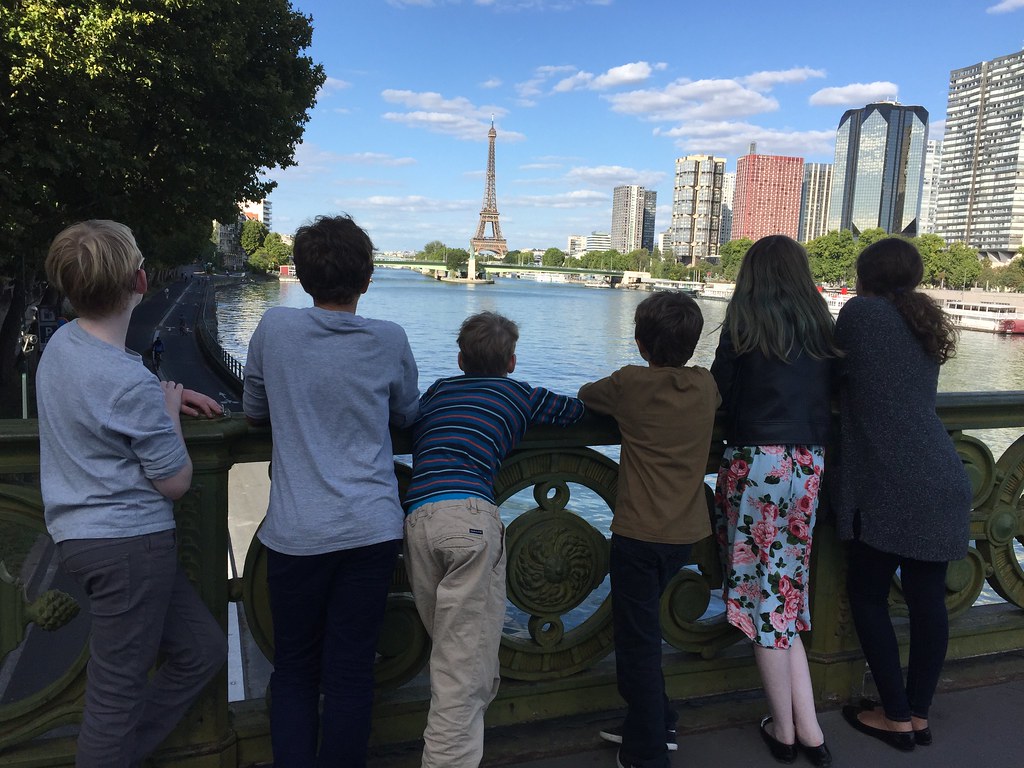 We went home and had a last Parisian dinner in the pub around the corner.

I dreamt I was working for Macron. I knew at that point, it was definitely time to get away.

Packing up was quite painless. Although also, I discovered subsequently, pretty ineffective as the French people had to post back to Dublin a pair of sandals and two dresses I left behind.

Daniel and I went down to the park and had a ferocious game of table tennis. I have no idea when he improved so much. Last time we played, he could hardly get it over the net. Then we hopped into the taxi and arrived in CDG two and a half hours before our flight was due to depart. We queued up at the check-in. “Where are you going?” asked the woman. “Dublin,” we said. “You are much too early, you will have to wait and [the unkindest cut] you are delaying the people travelling to Cork.”

At the airport which was quiet, it was definitely starting to feel like home. We saw: a man going to Cork whom Mr. Waffle knew but couldn’t quite place; a man I had met at a work meeting; and sitting opposite us on the plane Mr. Waffle’s French teacher from school. Once we got to Dublin, the French people were in departures waving frantically at us. We waved back, passing them like ships in the night. I met a former colleague in the bathroom. Note for people from larger countries, this is what being Irish is like, all the time.

We arrived home and collapsed exhausted. Herself piped up, “OK if I go to a party this evening?” And that was it for another year.