On Friday night, herself went to stay at friend’s house. I dropped her off on the way to a table quiz with former colleagues including the person who always wins pub quizzes. We won. On Saturday it was absolutely lashing. Once collected from her friend’s house in the morning and having had an hour or so to re-group at home, herself disappeared off with friends for the day. Daniel had no match (mirabile dictu). While Michael was at drama in the afternoon, Daniel, Mr. Waffle and I did some boring but necessary tasks (new football boots, wedding present, new jumpers) and then when Michael finished drama we all went to the science gallery exhibition on catastrophes which was not as thrilling as the boys had hoped. Last night Mr. Waffle and I went out to dinner and a film (Death of Stalin) which wasn’t bad but wasn’t as amazing as everyone said it was either.

This morning was mass and hockey followed by (drum roll, please) the boys’ birthday party only a month and a bit after their actual birthday on September 27. We had six 12 and 13 year old boys around (which, including our own pair, is eight boys, that’s a lot of boys). We took them down to the park where they played capture the flag and football. The weather was beautiful. When they came back to the house, they had cake and settled down to play board games until we gave them pizza about 6.30. We then fell back on charades until their parents came to collect them between 7 and 7.30. It felt a bit like 8 o’clock on Christmas night when everyone is exhausted but the mood is reasonably good. I’ve had worse birthday parties, I can tell you. Herself came back from another day in the company of friends to cast an imperious eye over the first years and eat pizza with them.

I sometimes wonder what exactly I filled my weekends with in my 20s. Possibly, shopping for a more extensive wardrobe. This is what Mr. Waffle and I wore yesterday: 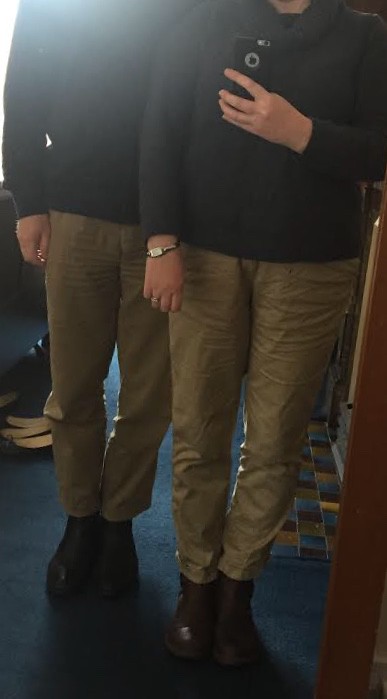