On Friday night there was no hockey training for Michael as it was cancelled due to cold weather. This is not the kind of attitude adopted by the hardy GAA players/coaches to cold weather; it was very welcome though. I had my office Christmas party so although it was my Friday half day, I went back in about 5 having spent the afternoon picking up my daughter’s bike from school (she was on the DART to friend in Wicklow) and watching a film in front of the fire with my loving sons. I was reluctant to go back to work but did and it was grand but I felt dutiful and virtuous rather than having fun and letting my hair down; possibly for the best. I bailed out about 7 to pick up herself from the DART. She was going to a friend’s Christmas carol concert in Trinity. I was a bit dubious – I have been stung before by youth choirs. We met her other friend J in front of Trinity and then went into the chapel where the concert was to be and to my surprise and delight it was quite warm. And then the concert itself was absolutely superb. The singers were amazing; they were unaccompanied but sounded utterly beautiful. The performance included the only good version of “Away in a Manger” that I have ever heard (sorry everyone). My favourite song was probably “Gaudete” but they were really all excellent. Afterwards herself and myself went to supper and that was lovely too although she was exhausted by the time we got home.

On Saturday afternoon, Daniel had his final GAA session of the year (7 a side tournament – which his team won – followed by pizza). You will note that the GAA were not put off by inclement weather like the hockey people. Michael meanwhile had his drama showcase (v good if a bit confusing). Herself and myself attended and we picked up glitter Christmas glasses. 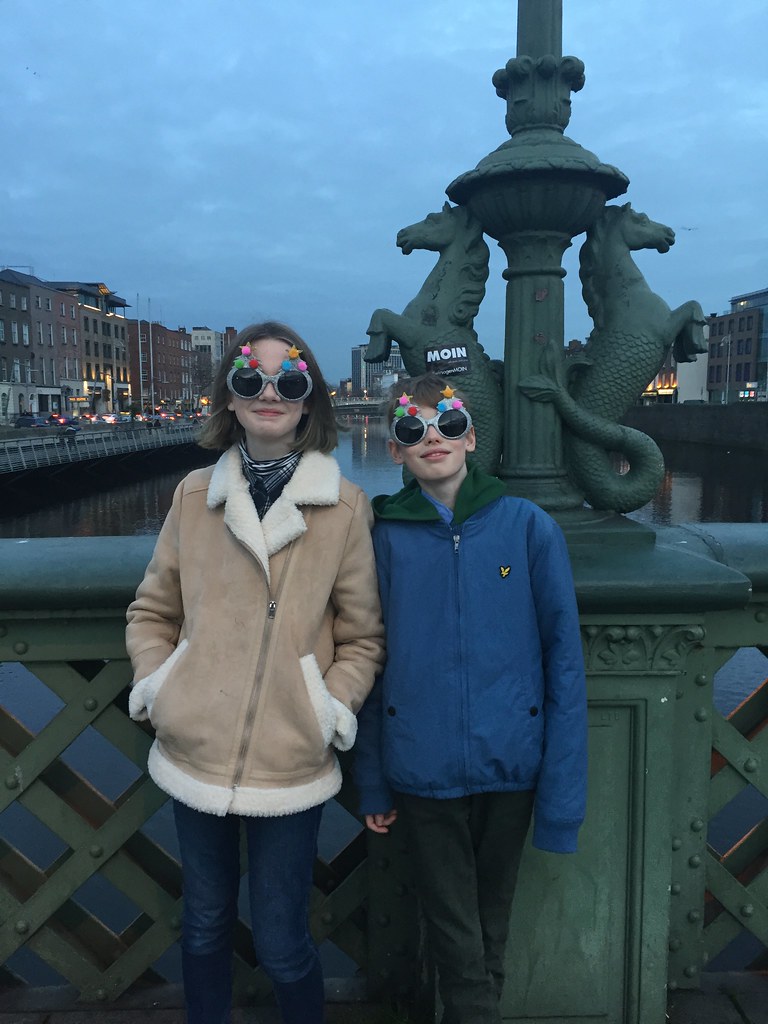 Afterwards we went to look at the Christmas window in Arnott’s (for me, for me, children only v mildly interested) and got on the new extended Luas line home (verdict from children – “it’s a tram”).

On Saturday night we all trooped off to see the Princess win an award. My poor parents and parents-in-law are not really well enough to attend this kind of event any more and my brother and sister are a bit too busy and far away so herself had to make do with enthusiastic support from her parents and some lacklustre support from her brothers who were, you know, supportive but a little bored.

This morning we had mass (herself mentioned from the pulpit for her award but they got her name wrong so, um, swings and roundabouts) and choir rehearsal. Had a great chat with one of the other parents while waiting for rehearsal to end. Like my mother, he is from Limerick and v interested in horses. I was asking how his daughter was getting on in secondary school and he said that he had spent last night explaining sets to her. “It is,” said he, “very useful for working things out if you want to put a combination on the tote.” He spent some time trying to explain this to me but, unlike his 13 year old, I seem to be a slow learner, I am glad, however, that somebody has found a practical example for the use of sets.

At lunch time we took ourselves off to see a special screening of “A Muppet Christmas Carol” in the cinema. Singing along was encouraged but it did feel like Michael and I were the only ones who knew all the words; so we were, I thought, a little conspicuous. We had hoped to go and look at the snow in the mountains but it was too cold and wet (I mean, I know snow is wet but you want blue skies to enjoy it not leaden sleeting ones) and we realised, belatedly, that herself has grown out of her hiking boots and would have to climb the mountain in Converse runners so instead, we went to the parents-in-law for a visit and now we are home, I have lit the fire and nobody is going anywhere for the remainder of the evening.