Last Monday night, Daniel had hurling training, there was a talk in the school about Transition Year and I was hosting bookclub. Something had to give. It was Daniel’s training. He took it manfully, particularly since the weather was freezing.

On Tuesday night it was parents’ council in the school at 7, Michael in scouts at 7.30 and Mr. Waffle at soccer at 8. We made everything but one of us had to cycle home from the school at 8.30 in the evening in positively Baltic conditions.

On Wednesday morning, the Princess and I left the house at the same time. As we arrived at the top of the road in the freezing cold, she said, “I’ve forgotten my gloves but I’m not going back”. She had “mocks” this week, a venerable Irish rite of passage where you do a whole set of practice exams for a week before you do your actual State examinations in the summer. Since you have half a year of the course left to cover, results are invariably hair-raising. They are taking these with immense seriousness in the school and she was particularly anxious not be late. I was wearing gloves. It was very chilly, my fingers were frozen inside my gloves. I half-heartedly said, “You can have mine.” “No,” she said, “you have further to cycle” and she pedaled off like a demon in the other direction. I felt like a heel all day. 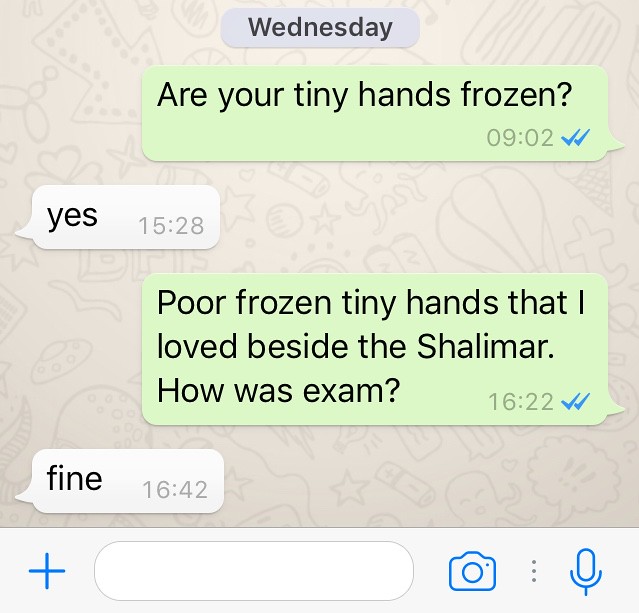 On Wednesday night there were no activities. This encouraged me to spread my culinary wings. Other nights I get home at 6.30 and there is some activity which means that dinner has to be on the table and eaten by 7 which doesn’t really allow for flights of fancy. On Wednesday night we had salmon (sadly still raw when brought out of the oven), cheesy potatoes from the butcher (slightly out of date but ingredients were described as “potatoes, cheese, sauce” so a bit difficult to gauge how bad out of date might be, sauce, it turned out, included cream so that meant out of date corresponded to “completely inedible”) and green beans (do you find that these always take longer to cook than you might think?). The whole was an unmitigated disaster. Thursday saw me returning to “fun with pasta” (say what you like, pasta and pesto, hard to go wrong) and last night Mr. Waffle had to go out to his parents’ house so the children and I had take away which was undoubtedly the highlight of the culinary week although, doubtless, very bad for all of us.

How was your own culinary/activity filled week?