Former colleague: Can you get out for drinks on Friday night?
Me: No, sorry, I’m going to French karaoke at the Alliance with Mr. Waffle and the kids.
Him: You win being middle-class.

It was quite good actually. We sang a song (La Mer– it sounded exactly like it does in the video at the link) and if herself hadn’t been ill with a cold and Michael hadn’t spent the evening with his fingers in his ears and his head on the table, I think we could have ranked it among our successes. 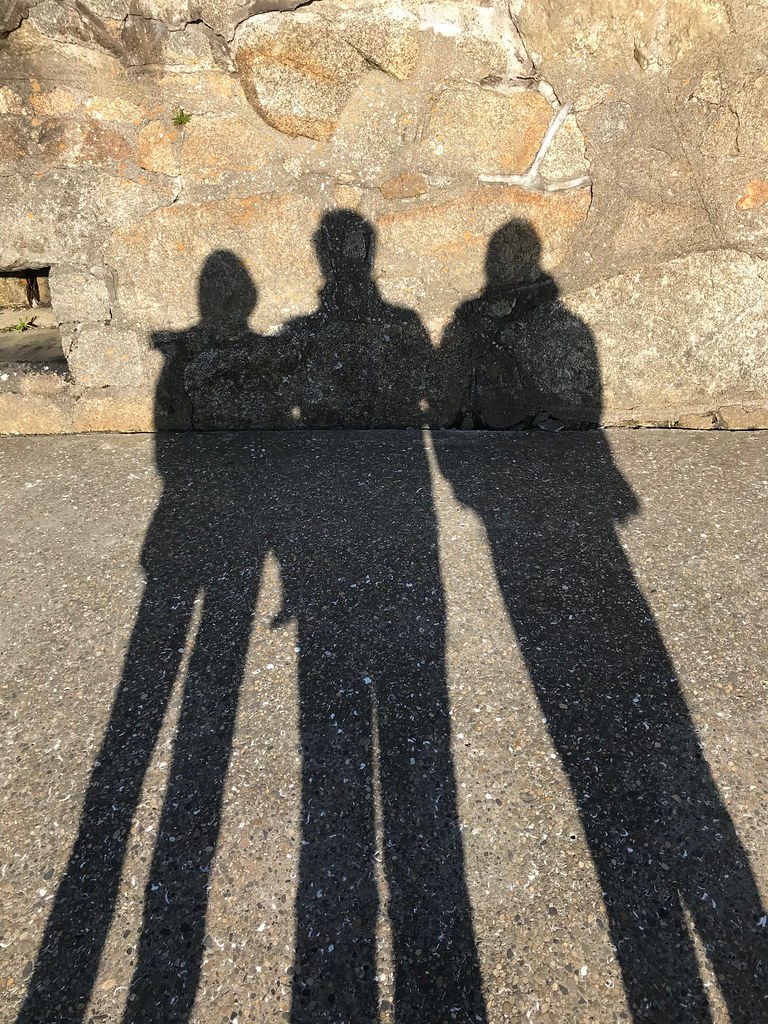 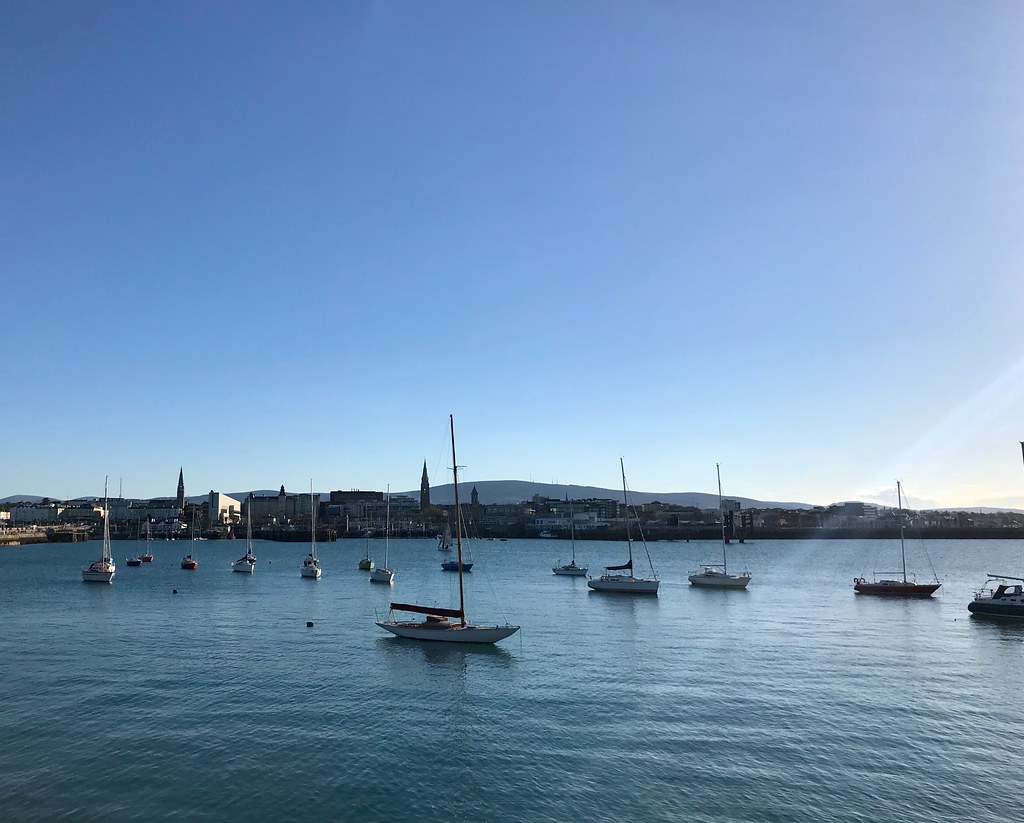 My father often says, “The telephone is not a toy”. This is what they used to say when he was growing up, apparently. The passage of time has certainly worked to make him wrong on that one. When I was in primary school, my parents had a complex arrangement for dropping fish to my grandmother on Fridays. It often failed and my father would say to me, as we drove to school, “What did we forget, Anne?” “We forgot the fish, Daddy.” My grandmother would then telephone my mother and say these words only, “Helen, you forgot the fish.” She was not one for unnecessary chatting on the telephone and, in this regard, my father is very much her son.

My father is amazingly old. He was 93 on March 25. What is really quite extraordinary is that he is the same as he has always been. In all the time I have known him, he has been himself in, it seems to me, exactly the same way.

I have a picture of him with my aunt and grandparents as a very small boy. I am fascinated by this. It was taken when they lived in America, and I can’t help feeling that this is a very South Pasadena picture rather than an equivalent from Cork in 1929 (exciting times in America though). They all look so informal and relaxed. 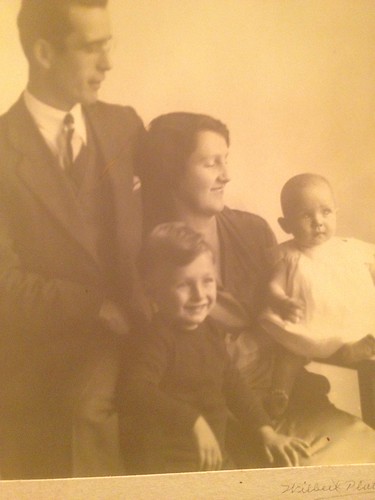 Due to my brother’s (frankly insane) labours in clearing out the attic, I have this one of him and my aunt after his return to Cork. 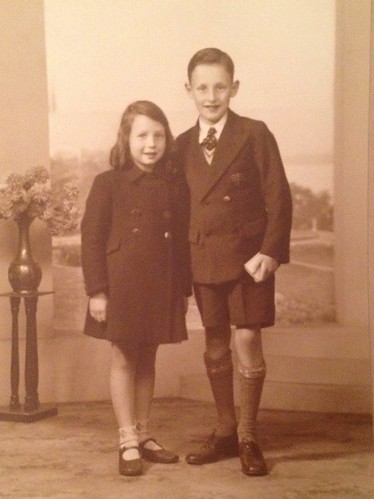 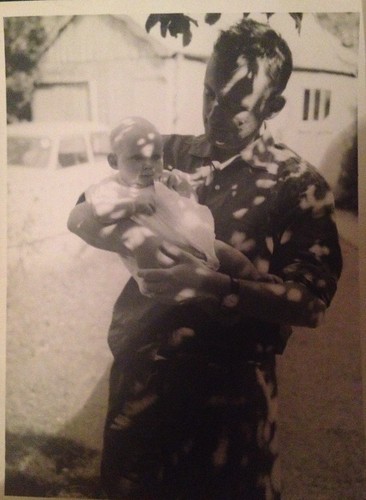 There he is with the beautiful baby in what was at the time a frightfully modern carrying device (could it have been called a papoose? Really?). My parents had taken me to a meeting of the Cork Historical and Archaeological Society. It is hard to know what benefit I derived from that particular meeting but at least I know from whence comes my propensity to bring my children to historical sites in which they have no interest.* 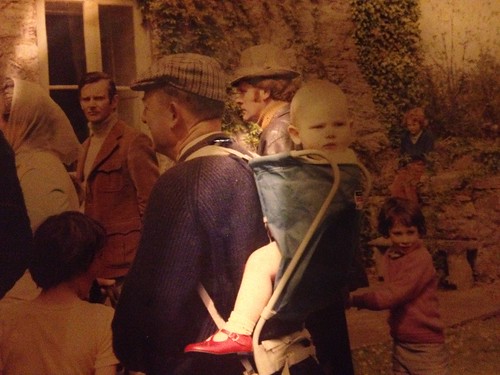 There we are in the front garden, while I was still the favourite child when neither of my sibling usurpers were born or thought of.** 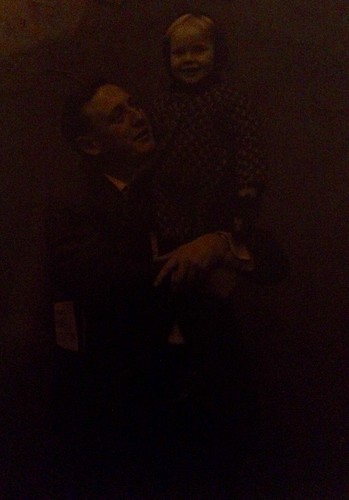 My father used to enjoy sailing and mountaineering before his children were born and given that these were different times, he continued to do so happily after our arrival, leaving us in the care of our saintly mother for up to a month every summer while he was off in the Pyrenees or sailing off to French ports. He has beautiful albums of black and white pictures he developed himself showing French ports in the 50s and 60s. 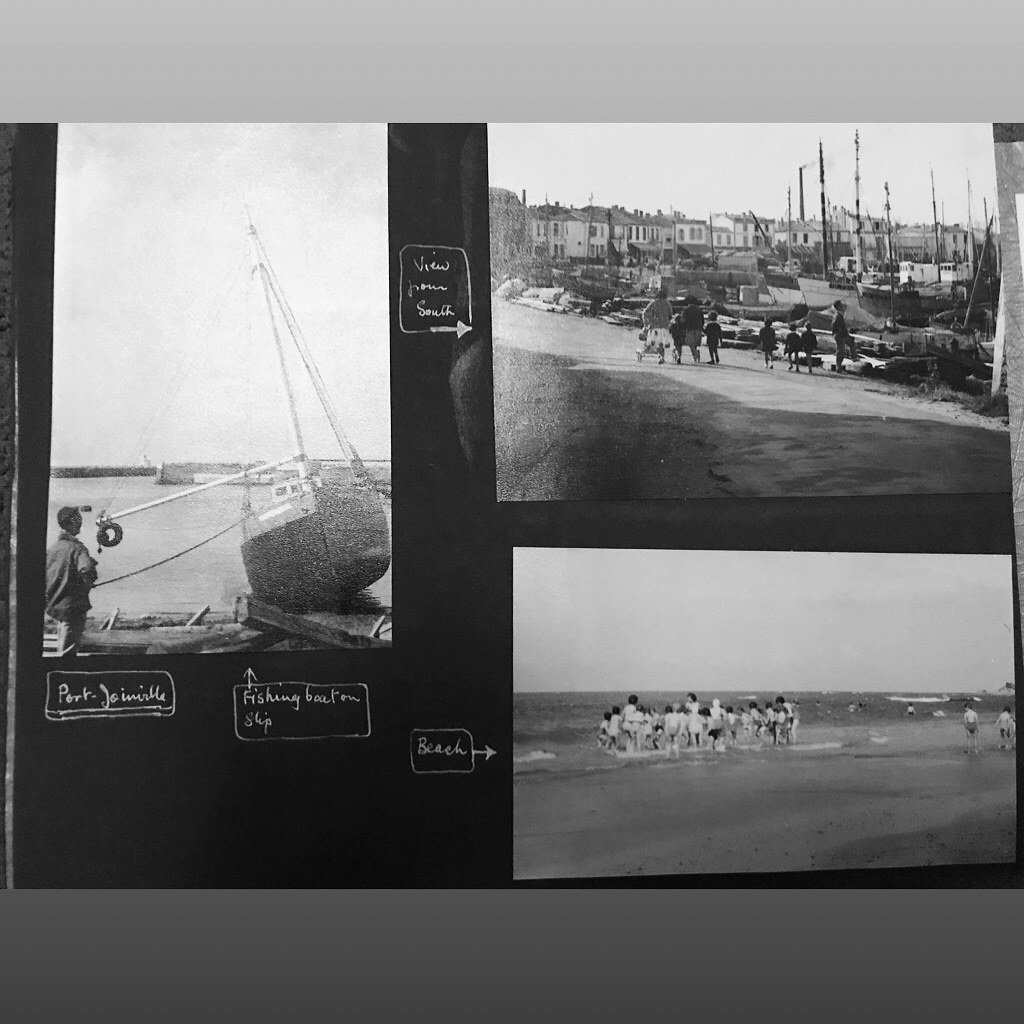 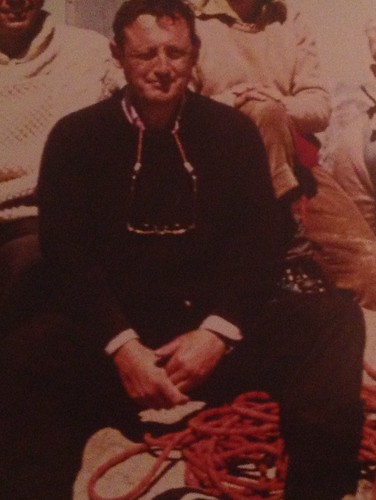 We used to sometimes visit him at work and he would give us frogs from the vegetable tray in the fridge to play with.** I feel bad about the poor old frogs now. 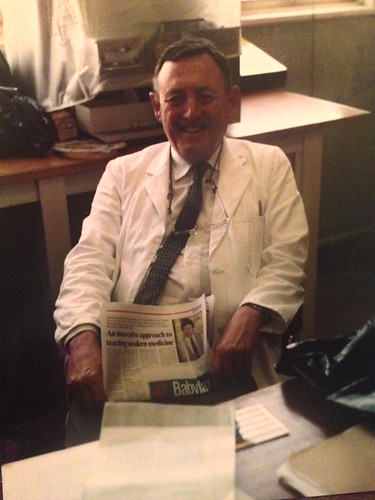 I am so grateful that my father is the same man he always was – frail, yes, it’s been a while since he’s been up a mountain or even on a bike (although he happily cycled into his 80s), but in essence absolutely the same – well read, knowledgeable, funny, infuriating, conservative, stubborn and entertaining. As my mother’s dementia gets worse and worse, I miss her very much and I appreciate all the more how lucky I am to have my father so mentally well. I do wish, though, that he would, occasionally, be willing to chat on the telephone. I suppose he is unlikely to change the habits of a lifetime at this point.

*Please admire the verbal gymnastics which stopped this sentence from ending in a preposition while, admittedly, making it somewhat more difficult to understand.
**You can’t have everything.

Normally I am not a morning person at all but the other morning, it was springy and I was cheerful and I leapt out of bed singing. An irate voice came from the bedroom next door. “Mum, we need to talk about singing first thing in the morning,” said Michael, “this is a terrible sound to wake up to.” Children can be a little crushing.

There was an all-white cat who lived in one of the houses at the top of the road who had been coming to our house and putting the frightners on Hodge since he was really quite small. He had one green eye and one blue eye. We called him Griddlebone and he marched up and down the gardens of the road as though he owned them. He frequently wandered into our house in summer when the doors were open to Hodge’s furious and hissing disapproval. Only the other day, I arrived home to find Mr. Waffle indignantly announcing that he had just seen Griddlebone weeing against the kitchen window (from the outside, I hasten to add). Griddlebone was insouciant, he was nimble and devil may care and the other morning, I found his body on the busy main road nearby. A neighbour came out and took in the body before it got squashed. Apparently his owners called him Bowie; he’ll always be Griddlebone to us.

I have secured a new job. I only started just after Easter so I’m still at the stage of working out what I’m supposed to be doing and trying to find my office. I think it’s going to suit me better than the last job though so that’s all to the good. Disillusion may, of course, set in. One of my former colleagues gave me a goodbye card with a fish jumping from a smaller bowl to a bigger one. When Michael saw it he said, “Mmm, still a fish bowl though.”

On the first day, I went out for a bowl of soup and a woman at a nearby table waved to me and said hello. I began to frantically scroll though the deeply inadequate Rolodex in my head: was she someone I had met at work that morning? “No,” I realised, “it’s M from bookclub.” Then I said (aloud), “I thought you were M from bookclub but you’re not, are you, wait, wait, I know who you are, I do, you’re M’s sister…” “Catherine,” she said kindly. Why would I think aloud like this? Suitably mortified, I scuttled away but with the inevitability of these things, the following bookclub was at M’s house which she shares with her sister who dropped in to say hello. “I’m so sorry about the other day,” I said. She was very kind but did comment when she turned to tell her lunching companions that I was Anne from her sister’s bookclub they all said, “Yeah, we know.”

So, lots of new people in the new job, none of them, it turns out, a sibling of one of my bookclub members but, so far, they all seem very pleasant. I must say, I do miss my friend in HR from the old job – a lovely, lovely woman who convinced me that there was a point to HR (comment from another friend working elsewhere on my telling her about the wonders of our HR division – “Really? In my experience HR are scarcely human and not at all resourceful”). But I can still meet HR friend for lunch and my new location is delightfully central.