Mr. Waffle pointed out that yesterday was the Spring equinox and from now on days are longer than nights. Just as well.

It’s my first mother’s day without my mother. Here we are looking arty in 1969. 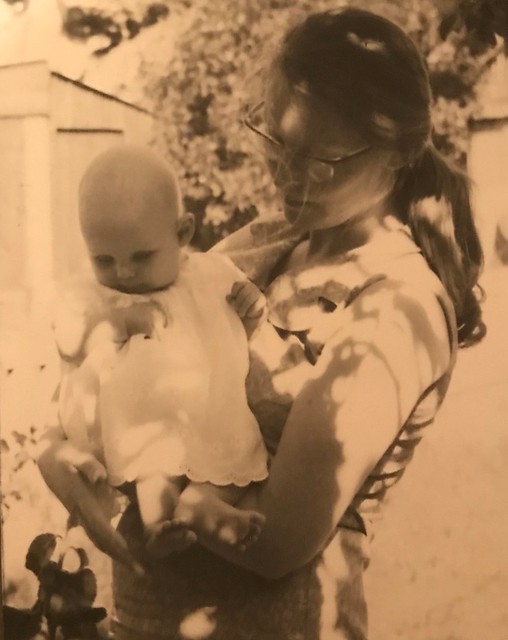 My sister visited the grave today and planted some flowers but she fears that the dandelion is king. Alas.

Still no Sunday mass. It’s so strange. Daniel and I went to play tennis instead but all the courts were occupied with two sets of people waiting to go on. There were four young people playing football on one court but I lacked the moral courage to do anything about it so we just gave up and went home.

Mr. Waffle and I swept the patio and cut back the foliage; something that made me ludicrously happy. Welcome to the land of middle aged thrills. 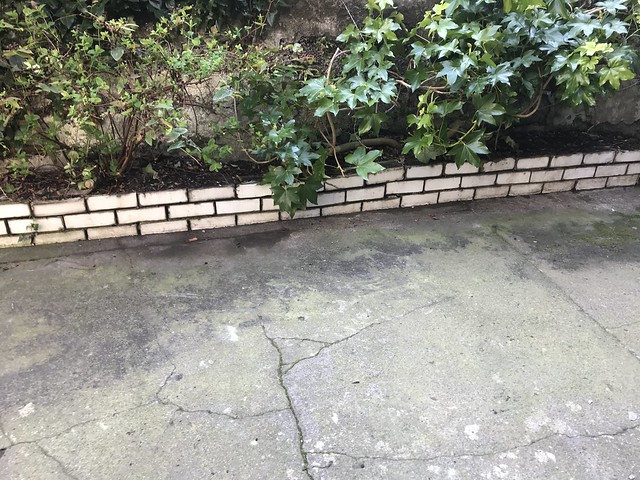 We went for a walk in town dutifully socially distancing. Temple Bar was the emptiest I’ve ever seen it. 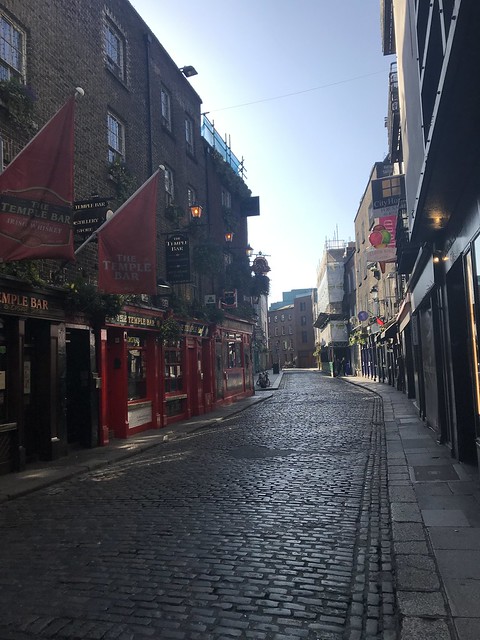 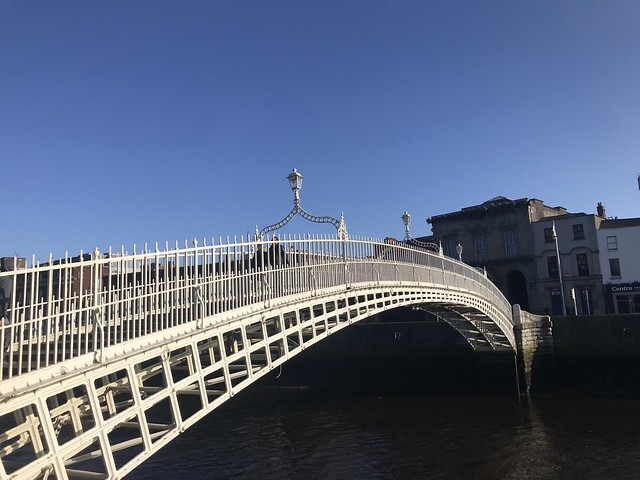 On our return home, my loving family made me afternoon tea and gave me flowers. Very satisfactory. Herself made brandy snaps. I love a brandy snap. 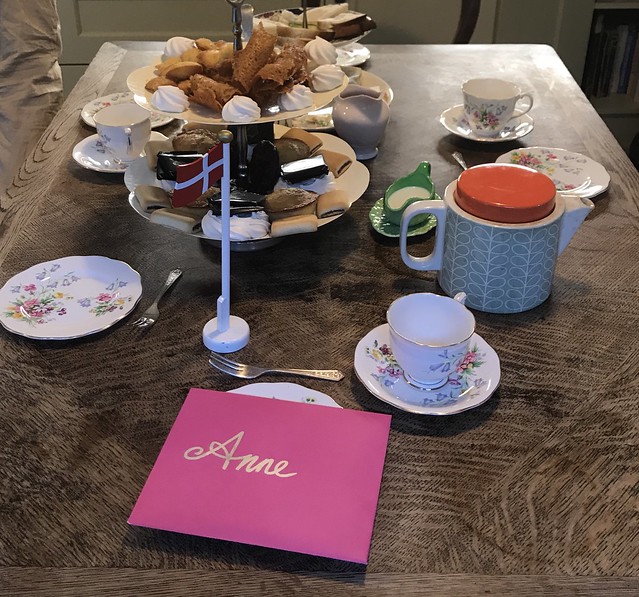 Mr. Waffle is reading Daniel Defoe’s “A Journal of the Plague Year” and I am contemplating re-reading my book about the fall of Paris which I remember as being impressive on life under siege in 1870. I feel sure I will find some bons mots with which to enthrall you all. So far, all that has happened to plague diary man is that he can’t decide whether to leave London or not.

My father continues to improve in hospital and if he doesn’t catch this wretched virus, he should be discharged home safely shortly.

In other news, my hands feel like scaly lizard mitts from constant washing.

I went into work. Town was absolutely deserted. The office was pretty empty also. We’re on a rota.

Behold a city centre street at 8.15 on a Monday morning: 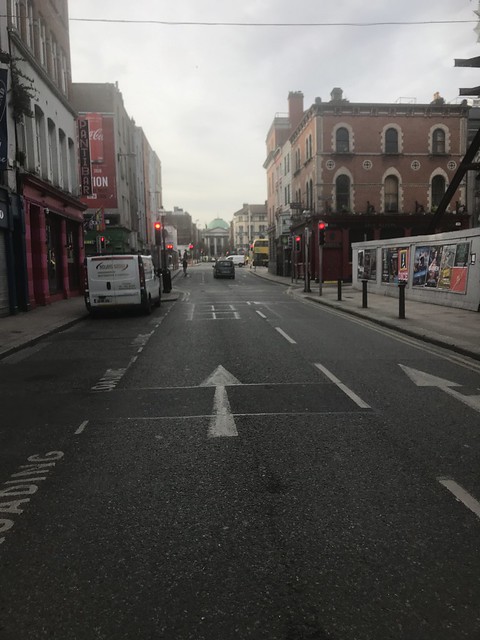 Brown Thomas (department store) was encouraging us to pull together in Irish. 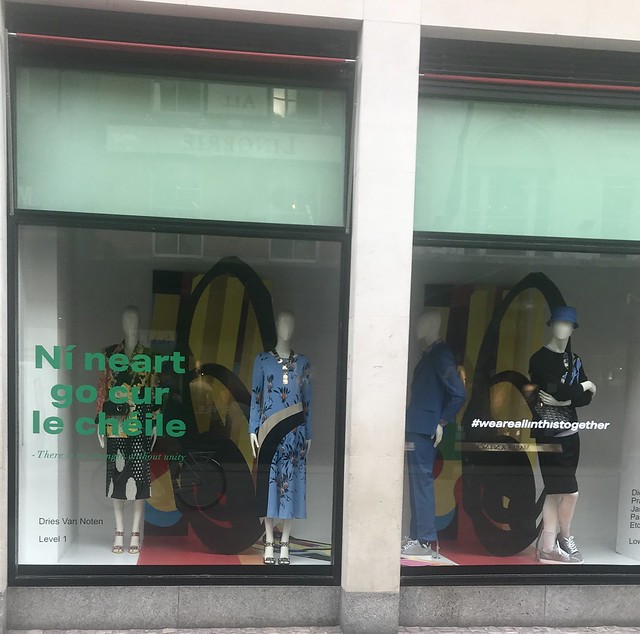 My father was tested for Coronavirus and came back negative. The hospital said that he could be released home. My sister did Trojan work with the discharge co-ordinator. My brother was already in self-isolation in my parents’ house after coming back from France the previous Tuesday. Even though he had tested negative, the hospital said that my father would still have to go into isolation. My sister said she would move home and mind my father and she and my father and brother could divide the house between them into separate self-isolation zones. My sister pointed out that neither she nor my brother would be able to go and give my 90 year old aunt her pills and her carer has, ominously, a cold. So, unless, they could find someone else to cover, I would need to come to Cork, stay in my sister’s house, not see my father or my brother and sister and check on my aunt every day. I stood ready, given how much my poor sister is doing but I was relieved when they found someone locally.

Britain went into lockdown and my three year old niece in London who has always been pretty dubious about outside as a concept was the happiest child in England. Her parents are sending us regular footage of her ongoing delight at being indoors with both parents all the time which are very entertaining.

I worked from home in the morning. The technology continues to work really well although I am already tiring of the video conferencing. Mid-morning, herself and myself walked up to a local shop to buy nice bread (no joy) and the owner said that he was closing the following day for an indefinite period. I hope he comes back.

I was in work for the afternoon. There was much running around and reading the runes after the Taoiseach’s speech further shutting down the country. Was everyone’s presence in the office essential? Could we all be set up to work from home? Apparently we could. Then possibly we could but some presence was essential (as someone said, “my indecision is final”).

Meanwhile, my sister managed to get a radio and headphones into the hospital for my father. He had been having a miserable time as the light was too poor for him to read and he was too deaf to listen to the radio without blasting everyone in a 2 mile radius. Our woman on the inside (my aunt’s cleaner who also works as a hospital cleaner a couple of days a week) went and set him up and put on his headphones. He was delighted but now there is no chance of him ever picking up the phone when I call.

I noticed that I was beginning to lose track of the days of the week without the anchor of regular schedules.

The libraries which have been stellar in the crisis (audiobooks, ebooks, you name it) reassured punters that it didn’t matter when they brought back their outstanding loans. In some ways, not as reassuring as they may have intended.

I used up the last of my dinner candles. And (unrelated) still no flour available in the shops. 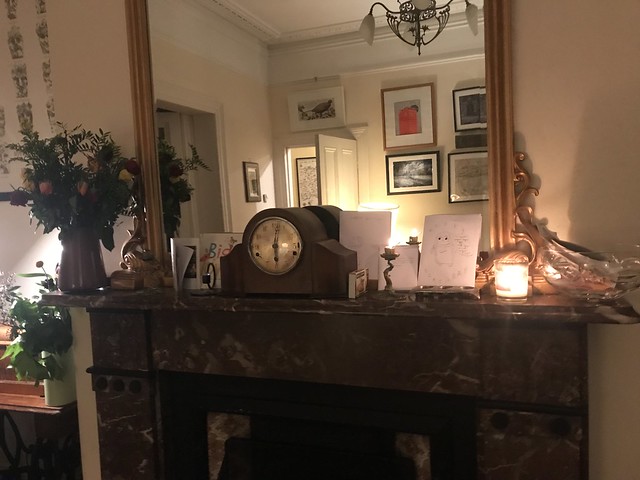 Herself began to paint her ceiling. 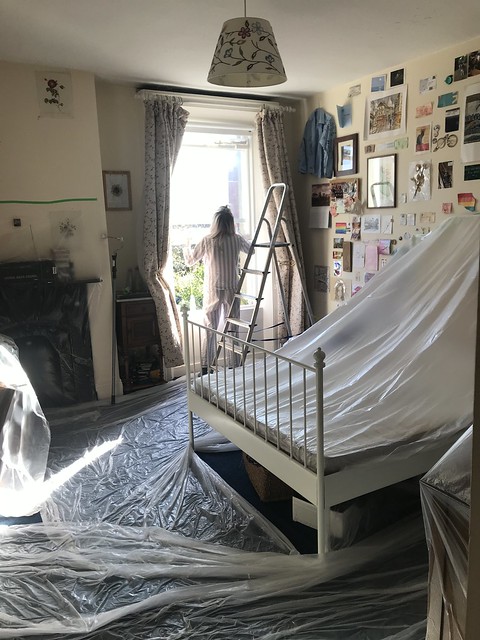 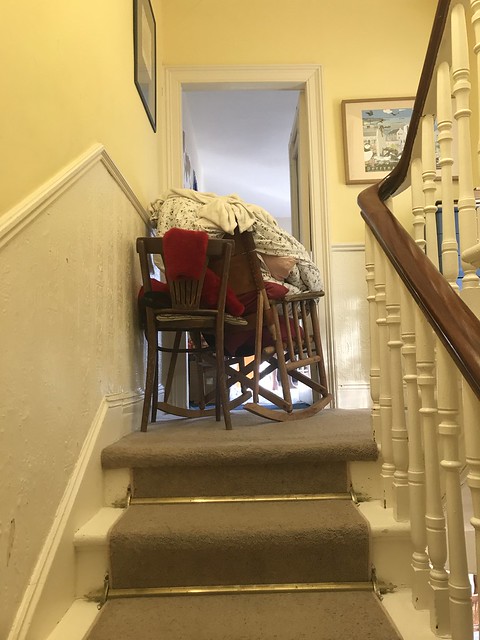 I did not think that the city centre could be emptier than the day before but I was wrong. 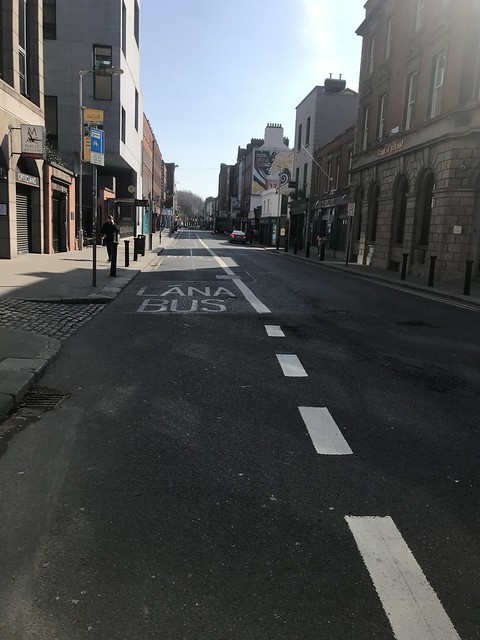 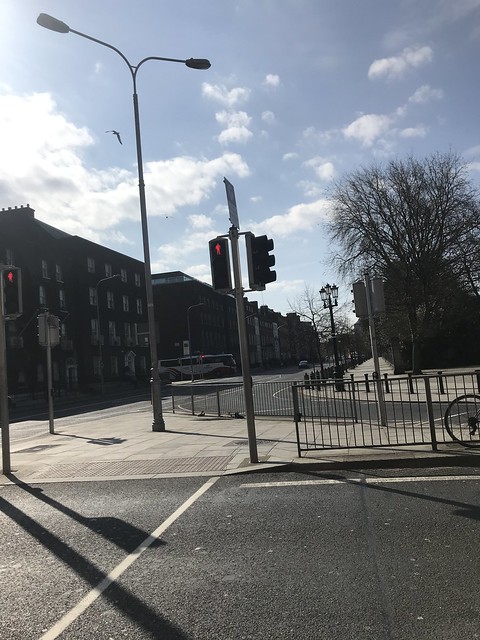 It was finally decided that we did not need a full-time presence in the office as everyone was tooled up to to work from home and the technology worked like a charm.

It was my father’s 95th birthday and, notwithstanding headphones, I managed to get hold of him and wish him a happy birthday. He was cheery at the prospect of discharge on the following day.

Herself completed her ceiling painting. I understand that further decoration is to follow, if the paint ever dries. She is currently marinating in paint fumes. 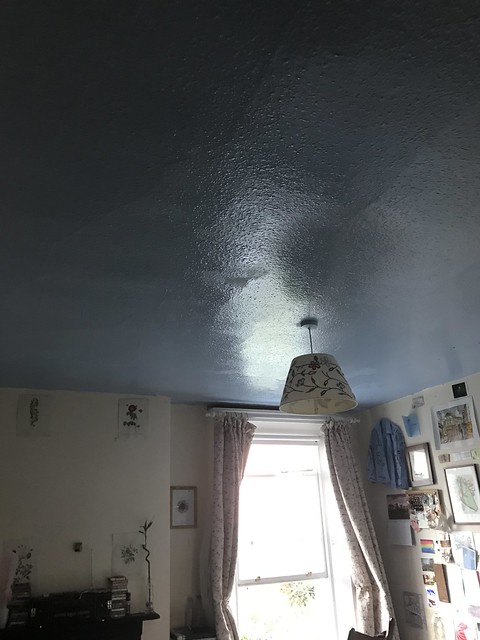 We got a communication from the school that they were engaging with the insurance company to get back the money paid for the school trip to Barcelona. I know this is very #mymiddleclasshell but here are the things we have booked and paid for this year which it appears after some engagement with insurers will not be refunded:

Still, as a young colleague pointed out to me, everyone has something. Another colleague told me dolefully of how he and friends had flown to Vietnam only be turned around and sent straight back to Ireland on the next flight.

A professional singer who sang in the adult choir at our church has died. He was in his early 70s, I’d say and very sprightly although a bit superior. Funerals are now small family affairs so we didn’t attend and I don’t know anyone who did. In the current circumstances rip.ie (a resource without which etc.) now has a load of comments under condolences and I see that the poor man seems to have died from Coronavirus. Grim.

I made the whole family watch “Daybreakers”. Only two stars on Netflix but who doesn’t like a high concept film about vampires that’s slightly schlocky (Mr. Waffle apparently).

Not having watched the news in years, I am now avidly consuming the nine o’clock news every night. Everyone hates it but me.

All of the neighbourhood whatsapp groups set up to help us through the Coronavirus are going crazy. So far no one has taken up the many offers of shopping for elderly neighbours and people are offering each other DVDs and books to swap. I suppose we all feel like a bit of community engagement.

I worked from home. I dragged the boys out of bed about 11. They were stoic. Michael as his daily exercise cut the hedge and swept the path. I was quite pleased. Inspired by his effort, this evening I pursued my long held dream of moving the compost bin. Quite difficult but mission accomplished.

We got bad news from my sister. My father had a temperature and they wouldn’t let him out of hospital. Public health said no and public health are basically running the country now. My sister spoke to my father who is not a particularly emotional person and she said that he said his heart was broken. I feel so sad for him but fingers crossed it’s nothing serious and they will release him next week. I think we’re all a bit terrified he’s going to die alone in hospital having cannily managed his health for so long but maybe we are all unduly pessimistic. I certainly hope so.

At 8 this evening everyone in the country was encouraged to stand outside and clap for the health service. I am very grateful to the health service but I thought it was a fairly stupid idea. I forgot all about it but at 8 I was sitting inside and I heard this thunderous clapping, I went to the front door and there were all the neighbours up and down the street standing at their front doors clapping away and I joined in, somewhat sheepishly. It was surprisingly moving.

Tell me your own plague updates.