Every woman I know was inundated with invitations to online conferences. Of the three I was invited to, I went to the one from 6.30 to 8.00 in the evening. The timing didn’t seem particularly right on but it did suit me. I watched from home. Herself came and joined me. It was a good panel and interesting. One of the speakers was an older colleague at top management level. I thought she was pretty good but herself said, “She sounds exactly like you, I would not pay for those insights, when I get them for free at home, all the time.” Make of that what you will. One of the speakers was joined by a baby on her lap and the moderator’s small children could be heard roaring in the distance, “Their father is supposed to be keeping them under control,” she said through gritted teeth. Herself tells me that in the lectures that became “A Room of One’s Own, Virginia Woolf, spoke of the “other women who are not here to–night, for they are …putting the children to bed.” Plus ça change eh?

Daniel had his course so was online all day doing Engineering. Roddy Doyle came back to Michael’s online English class to give the 13 children who were there his further advice on their writing work for about an hour. Honestly, the man is a saint. Michael said he answered all their questions and chatted away to them and they really enjoyed it.

I saw this sign outside a restaurant in town. Unintentionally accurate. 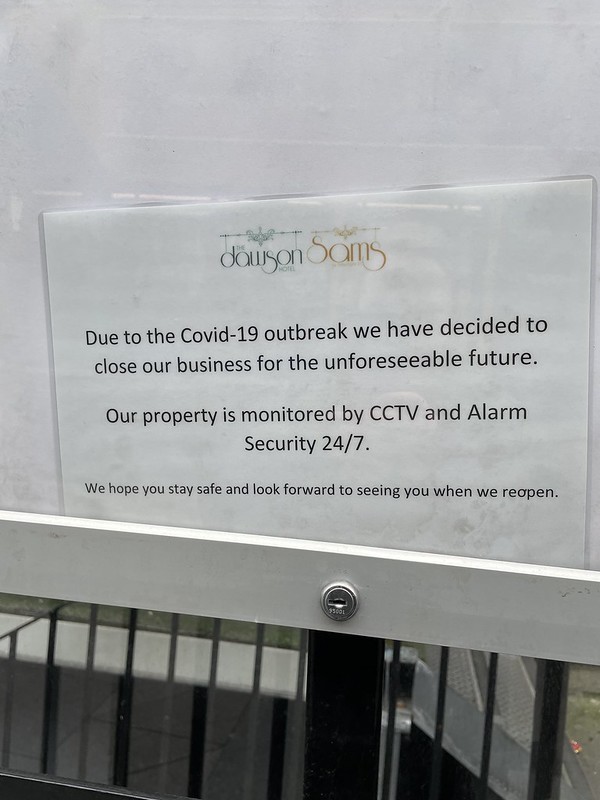 That evening marked the deeply unwelcome return of the school parents’ council meetings. The principal is long winded man and have you noticed that however long someone is in person, it is as nothing compared to how they get into their stride in online meetings? We were given some video footage of the outdoor classroom. If you ask me, even set to music on video it looks pretty bleak.

A former colleague sent me birthday flowers and chocolates out of the blue. It was such a lovely surprise as completely unexpected. I think everyone is trying to do more of this kind of thing. It was very nice to be the beneficiary. And due to the fact that the house is freezing, they’re lasting really well. 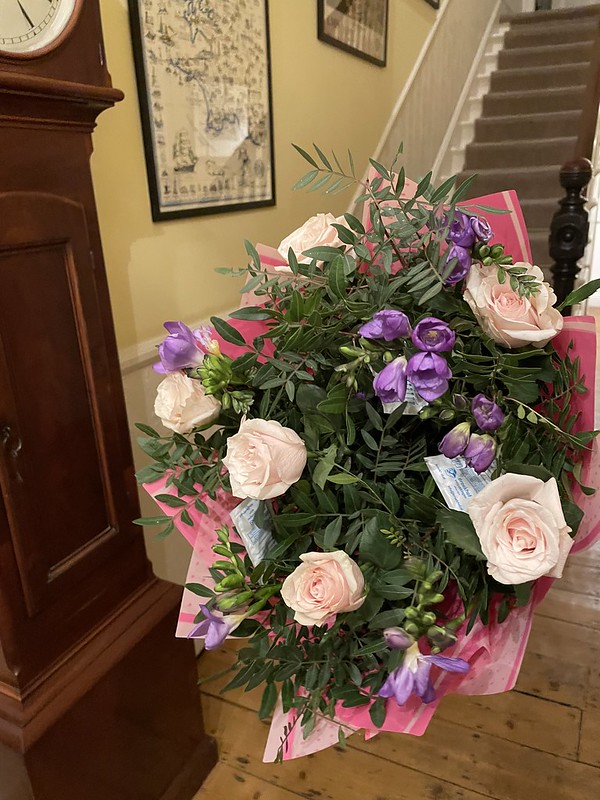 I took the day off work and woke up to driving rain. Alas. Mr. Waffle and the children provided presents and cards which I graciously accepted as my due. Some birthday cards came in the post; loads of people sent messages by text and email. I was delighted with myself. I do love to celebrate my birthday.

Mr. Waffle and I braved the elements and went out to buy the ingredients for a delightful afternoon tea. We returned to the house with our buns and fancy bread and cucumber to find that Irish Water had turned off the water due to a leak and it wouldn’t be back until six that evening. Alas.

The boys got messages about their Leaving Cert subject choices. Daniel is ok but Michael really wanted to do History and Geography and they are timetabled back to back. The perils of a small school. He’s decided to do Geography in school as he knows all the specialist vocabulary in Irish already (igneous and metamorphic rock anyone?) and History outside school. We’ll see how it goes. Herself had the exact same problem and ended up doing Art in school which she enjoys, so that’s something, but which is not, perhaps, her strongest subject.

So a slight pall cast on my day due to Michael’s understandable gloom and the absence of cold water in the taps, but never mind.

I collected herself and her bike from school. She greeted my arrival with unalloyed delight. In the latest news, it appears that following union directives teachers can no longer give test marks or sight of corrected scripts to students. She despairs and, I think, so do her teachers.

Anyhow, crucially, when she got home, she set to co-ordinating my afternoon tea and making brandy snaps (a firm favourite of mine – she makes an excellent brandy snap). This left me time to appreciate the flowers my sister had sent me. Very pleasing. 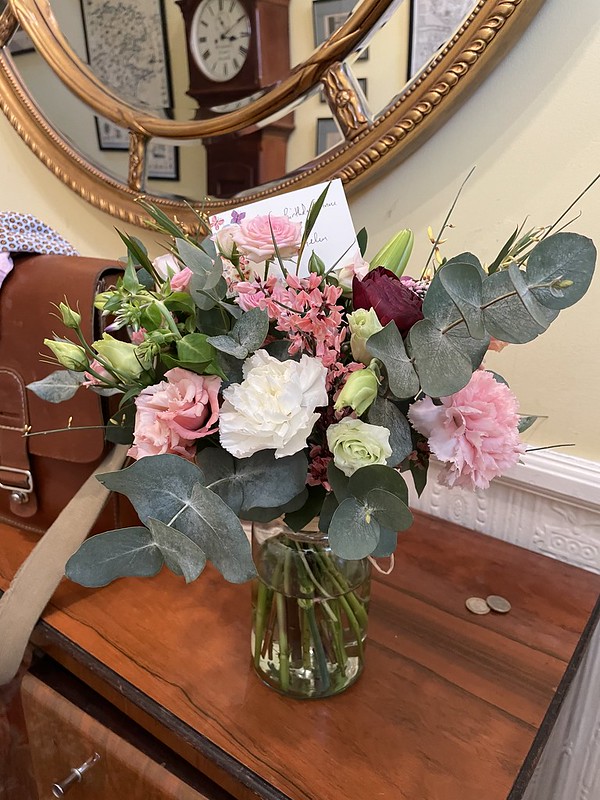 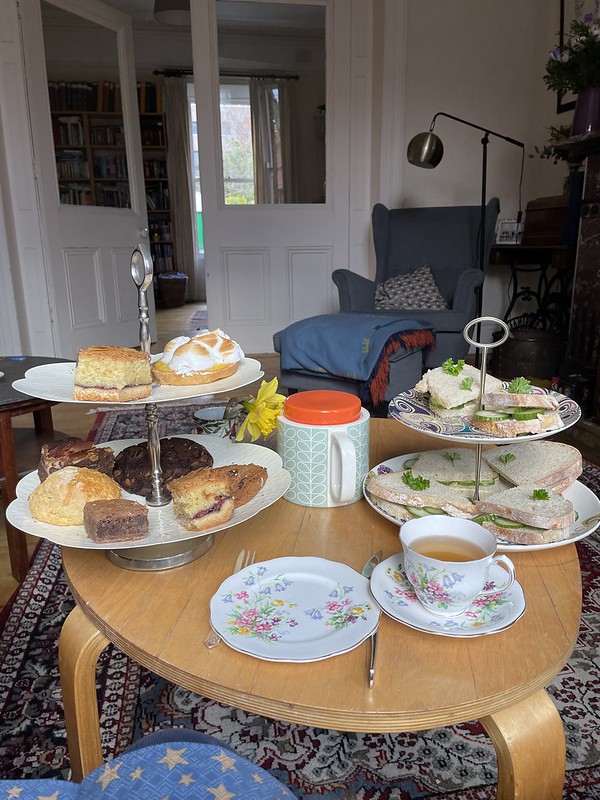 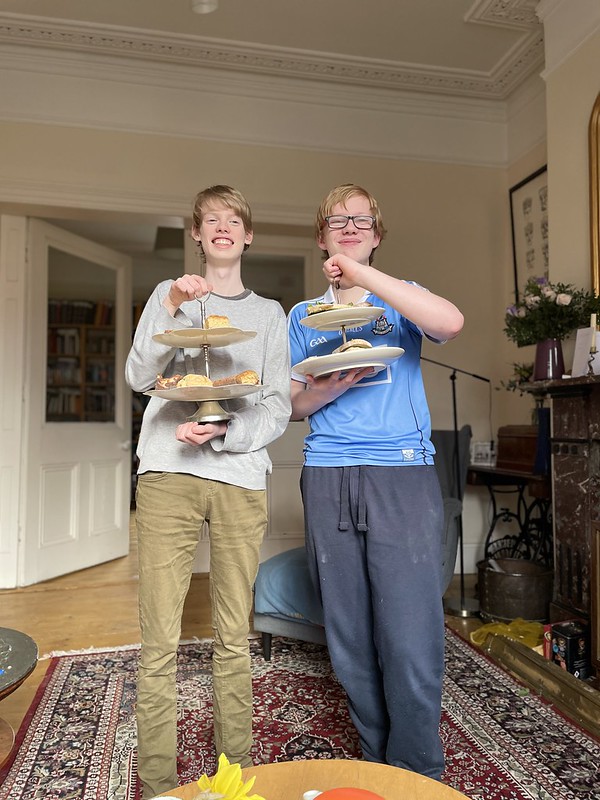 The tea had to be made with hot water from the tank but no one appears to have suffered any ill effects.

Then after dinner there was cake. My husband and his ability to take a lovely photo of his wife, people: 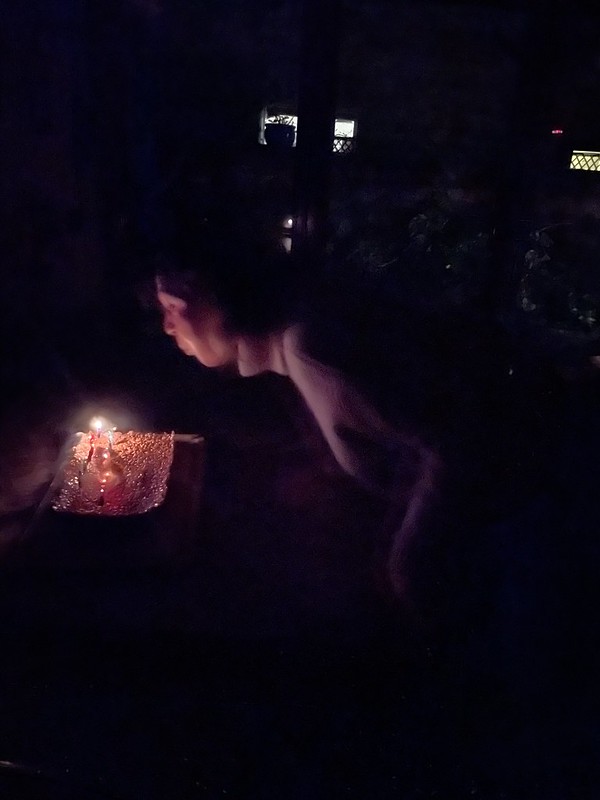 And a zoom call with my brother and sister who had clubbed together to, very generously, get a blue book voucher, which I really hope to be able to use this year. My sister also supplied various unguents for my aged body. It turns out that all the perfumes of Arabia can sweeten this little hand. Since my brother set up the zoom call, I got to enjoy the sensation of waiting for admittance to my own party, as I told him, once I was let in.

All in all, a good birthday.

I paid for my fun on the previous day with a rather frantic day at work. Still, well worth it. Mr. Waffle was presented with a social dilemma. While he was out, one of the neighbours dropped by a bottle of wine to say thanks for the bike. We had given away three bikes and Daniel could not say which of the three men had dropped in the bottle of wine. One of the three is a mild media personality and Mr. Waffle showed Daniel some pictures of him in action and, happily, he was able to confirm that this was the wine donor. Life is full of difficulties.

It was this day last year that the Taoiseach announced from Washington that the country was going into lockdown and that we were going to have a very odd St. Patrick’s Day. There has been lots of “one year on” commentary in the media but I’m not sure I have a lot to say other than, it’s been long. I am simultaneously deeply bored of my 5km limit and the sameness of it all and very used to what I notice people are no longer calling “the new normal”. I know it could be worse but somehow that doesn’t make it a great deal better.

The wind knocked some branches off one of the apple trees in the back garden. I put them in a vase and now they are putting out blossoms. I am delighted with myself. Now that I’m 52 these are the kind of roller-coaster thrills I’m enjoying all the time. 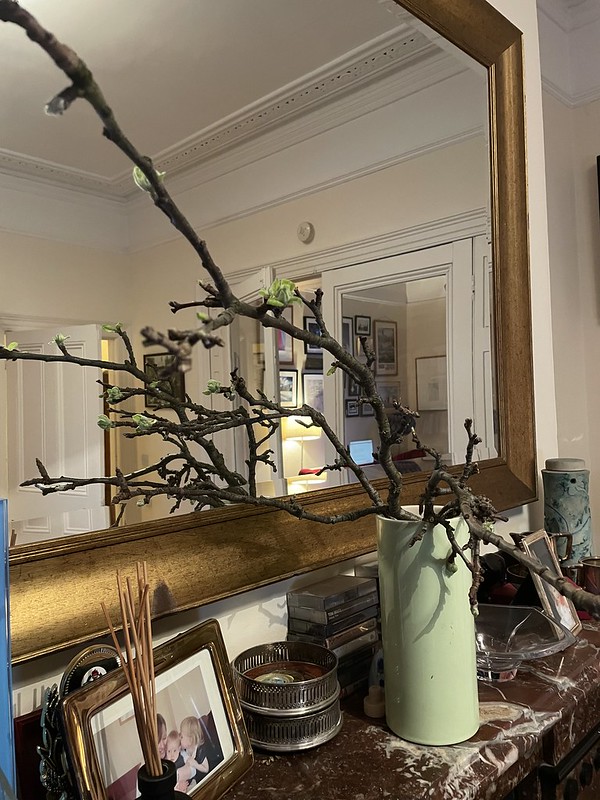 To make up for the dreadful picture her father took of me I spent a happy time with herself taking selfies with the various filters available to me in my new iphone. I love this one with the contour filter wherein I look amazing but, as herself pointed out, she looks like she’s made of plastic. Look, as I said to her, win some lose some. 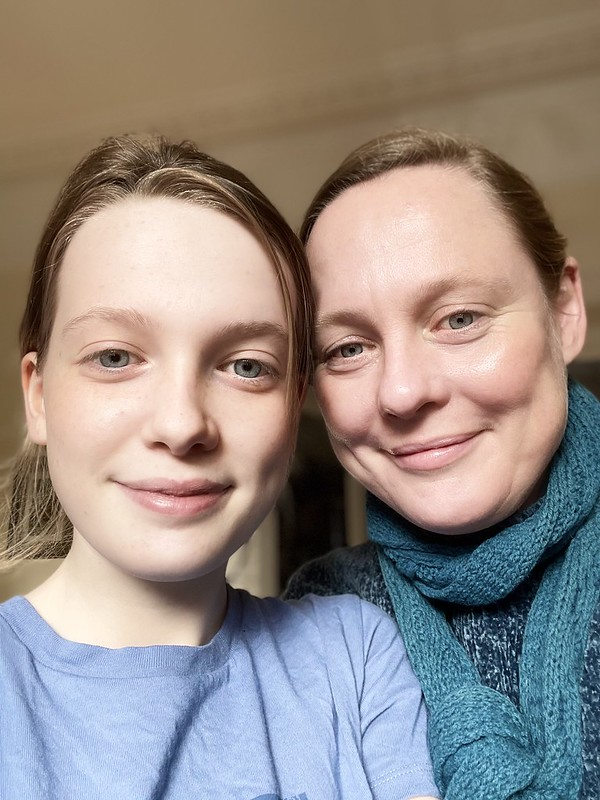 Herself and myself talked a bit about this poor woman who was murdered in England. V depressing to think that so little has changed for women’s safety since I was the same age as she is now. I tell her the same things as my parents told me and I don’t like her going out in the dark alone.

Herself was a bit down so we went out on our bikes to the local shops. We were both cheered by a trip to Lidl. Sigh.

The cat welcomed signs of spring. 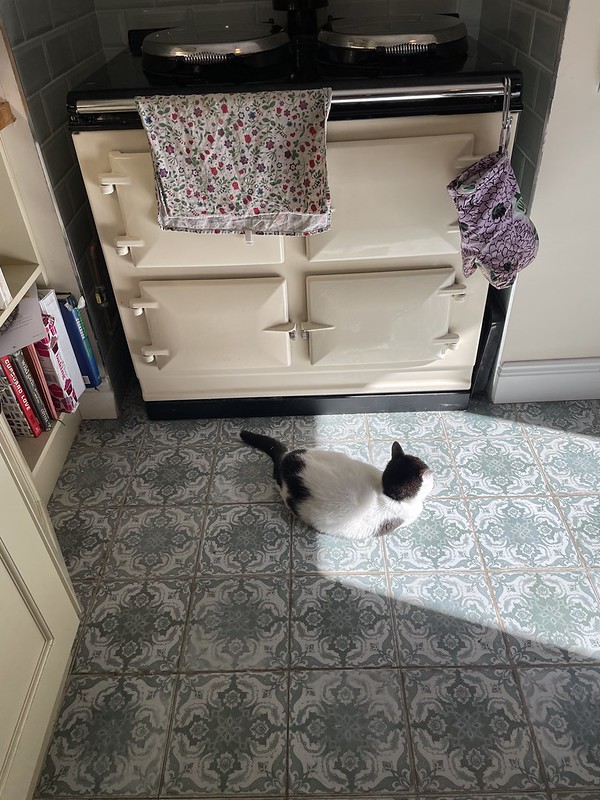 Mr. Waffle and I went in to Capel Street with our Pevsner guide. And it was grand and mildly interesting and all but I’m not sure a wander up and down Capel Street in the driving rain on a Saturday afternoon is living my best life but, I can tell you, I know my Wyatt windows from my string courses now.

My sister gave my aunt the animatronic cat. Notwithstanding my sister’s description of it as “rather creepy”, my aunt seems to be delighted. We will follow developments with interest. Did I tell you that my aunt got her first Covid jab? Well, she did and she seems to be fine. So good news there.

There’s a little fatigue amongst the troops after my birthday but, nonetheless, a card is produced and herself bought a bunch of flowers as did her father. I now have four bouquets and my blossoming branch. Delighted with myself.

I went for a walk round the block while my sister did likewise in Cork and we talked on the phone and admired signs of spring in our respective locations.

Mr. Waffle, the boys and I went for another walk after lunch and then Daniel and Mr. Waffle settled down to watch the rugby (Ireland v Scotland, Ireland won!) and Michael scuttled upstairs to continue his game of Crusader Kings III (he has spent many months expanding his empire); and herself continued dolefully with her studies.

As ever, I am anxious to hear news from your own lockdown, bated breath etc.