I got an exciting package from the relatives in London containing a Cork poster for my birthday. Very thrilling. 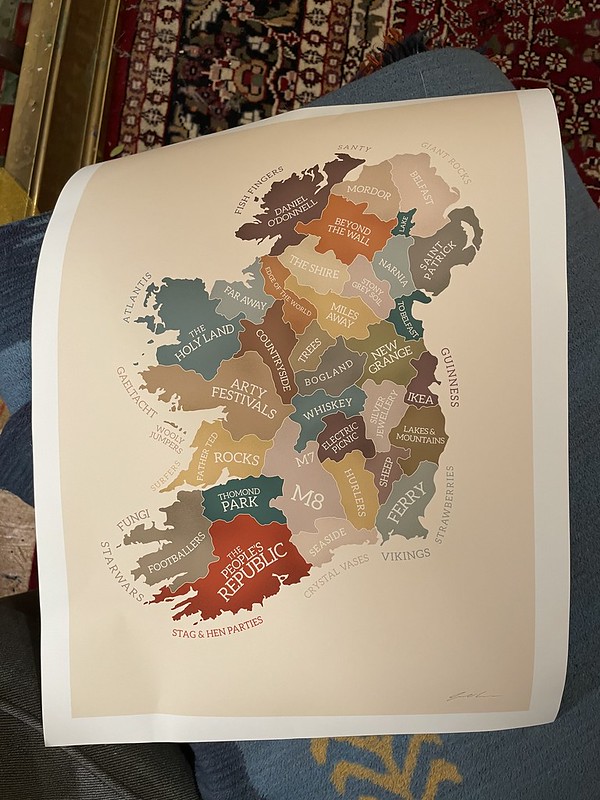 We were all very excited to puzzle out this extraordinary translation of washing instructions on a new scarf that herself got. My favourite touch is the apostrophe in necessaire. 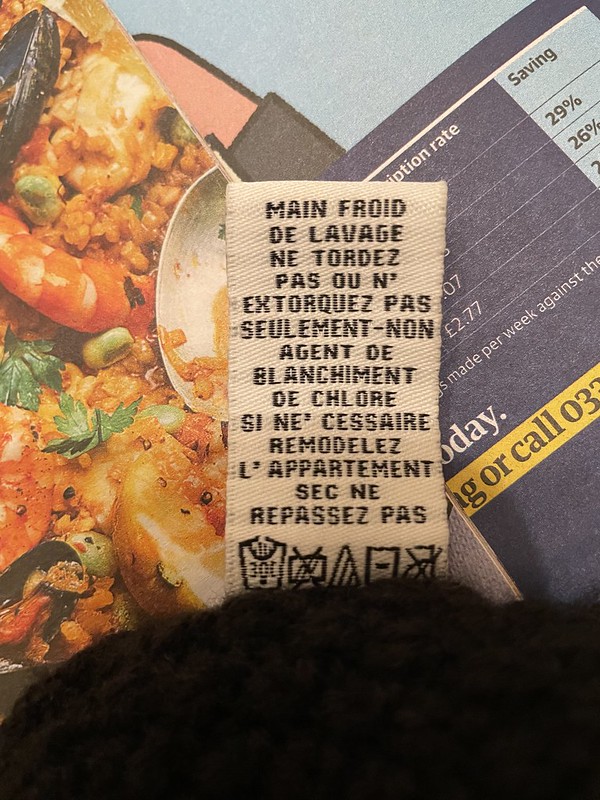 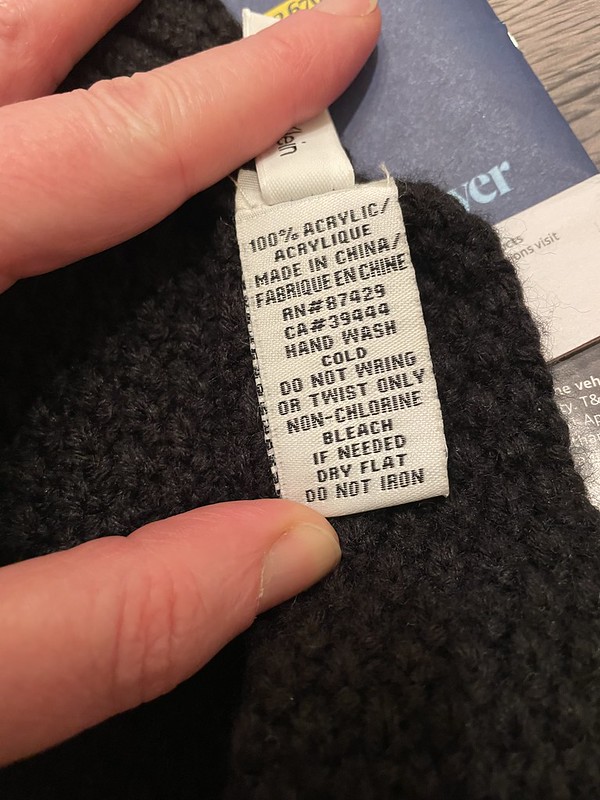 The fifth years are back in school and herself is outraged having very much enjoyed having the building open to sixth years only.

I took the day off work as it’s a quiet week with Patrick’s Day in the middle. It was a beautiful day and Michael and I went for a cycle in the park in the morning. Mr. Waffle and I cycled out to Chapelizod and had a look at the weir in the afternoon. It was an excellent outing by pandemic standards. 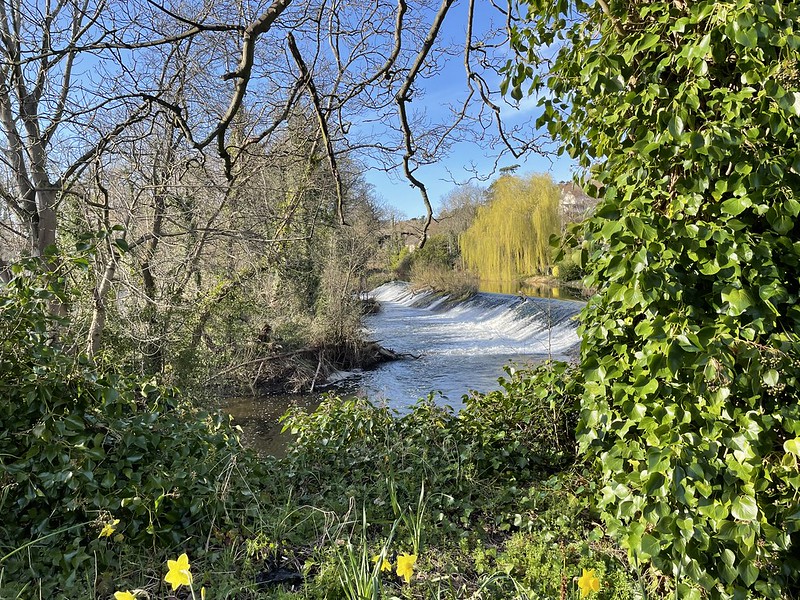 One of the boys’ teachers from primary school rang me out of the blue to say that the church where they were baptised was trying to get in touch with us. Odd. I had a grand old chat with the teacher anyhow. She was asking after all of the children which was nice; she herself is absolutely delighted to be back in the classroom even though she has junior infants this year and I can’t help but imagine social distancing must be difficult. Anyhow, I contacted the church – they had lost the boys’ baptismal certs but with some information on dates, they managed to locate them. So much for the Catholic Church’s extraordinary record keeping or, alternatively, it’s an impressively elaborate scam to get the boys’ data.

That evening we went into town and looked at the buildings lit up in green for Patrick’s Day. Low levels of enthusiasm but it was something a little different. 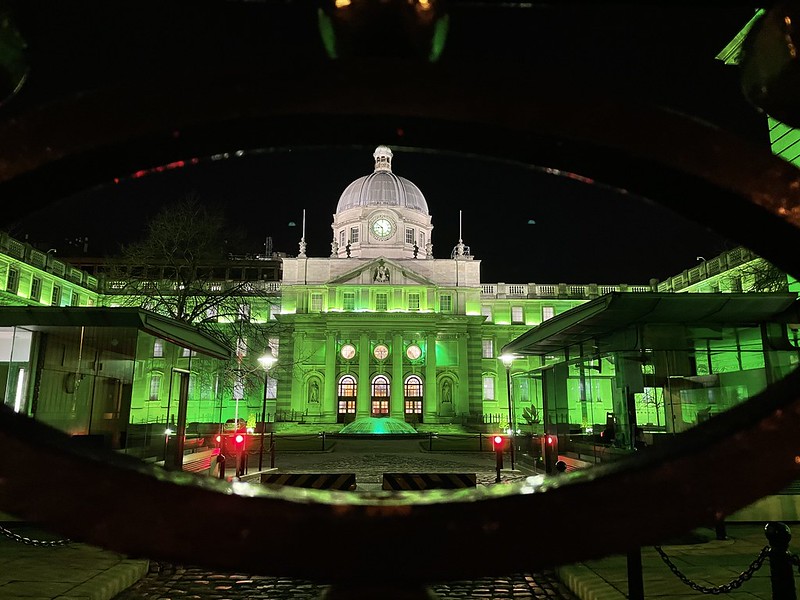 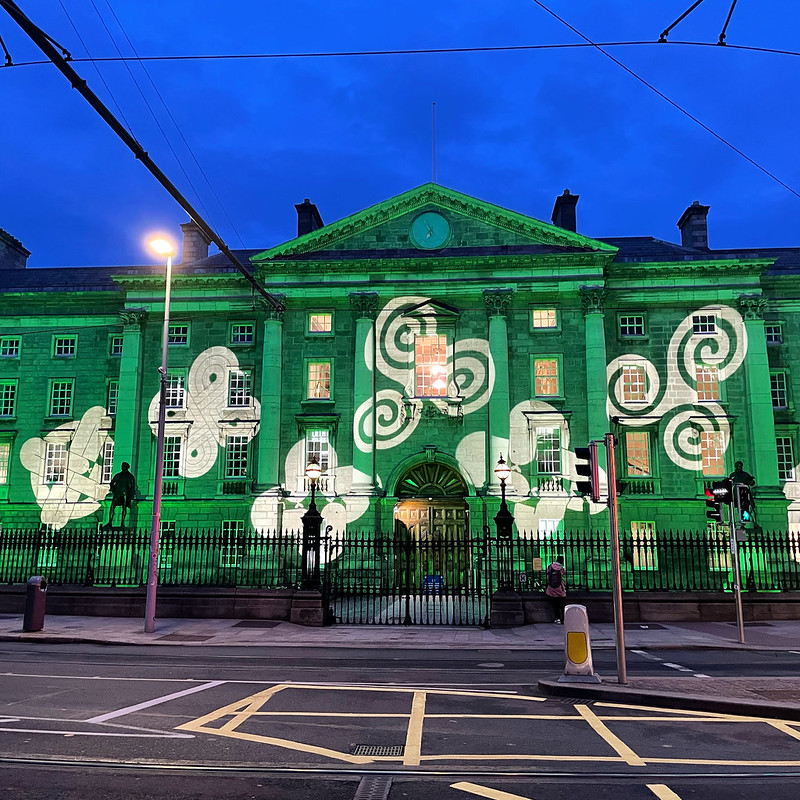 I made everyone listen to “Hail Glorious St. Patrick” in the car on the way home.

After the excitement of Tuesday, this was a quieter day. I thought about my father saying that when he was a little boy, the first time he really understood the passage of time was when he put his St. Patrick’s Day badge in a drawer and then a whole year passed and he was able to use it again. Not perhaps one of his best anecdotes but, it transpires, unforgettable.

Mr. Waffle, Daniel and I went to the Botanic gardens. I mean, fine, spring has sprung and half of Dublin was sitting on the grass enjoying the fine weather. There were pictures out from a photographic competition and I think it’s fair to say, that we were all more excited about this than we would have been in peace time.

Herself is preparing for her various oral exams and is concentrating on her German oral. We watched a dreadful cookery show called “Wer kann, der kann” as practice. Would not recommend although I am slightly intrigued by this review from the Hindu that I found online.

In the midst of it the cat started making the most appalling growling noise in the kitchen. Herself went to investigate and found that the cat had caught a mouse. Mr. Waffle was out and herself, reading the situation quite correctly, decided that I was useless and ran to put on her shoes, get a plastic bag and dispose of the mouse corpse. When she got back it was to see the horrifying sight of the cat bolting the mouse down starting at the tail. On the plus side, it was definitely a mouse and not a rat. Oh Lord, this is the year of vermin. The cat was delighted with herself.

Daniel was on dinner and he decided to make pizza. I picked up some burrata at lunch time at considerable expense to make salad to accompany the pizza. Mr. Waffle picked up some Lidl mozzarella for the topping and Daniel was a bit dubious about its quality. In fact, it was fine. Then Mr. Waffle took some of my beautifully curated salad, “I see what you mean about the Lidl mozzarella,” said he, “It isn’t really very nice.” I was fit to be tied.

Herself pointed out to me that I am not a restful companion and I keep hopping up and saying, “Right” and putting them all to work. This arose when I got up after dinner and said, “Right!” and all the children moaned, “Not ‘right'” which I found perplexing until it was explained to me.

Mr. Waffle is a hard man to buy for but he seemed reasonably content with his presents. His sister in London starred by getting him a signed copy of a book he was already interested in. She knows the author. The glamour.

Dan had to go to the physio and Mr. Waffle took him (his knee is a bit sore but it’s not serious you will be glad to hear). While they were gone, I sprang into action, taking from their hiding place the ingredients to make the classic rice krispie birthday cake. I made it, I washed up after it and I hid the cake before he came home. You can imagine my ire when Mr. Waffle noticed that there was an extra half pack of rice krispies on the shelf. Sigh.

Mr. Waffle and I took our faithful Pevsner guide and continued our exploration of Dublin. He quite fancied exploring Temple Bar. Normally he loathes Temple Bar as it is full of tourists but he thought he might like it in lock down. He was wrong. It was the most spectacularly depressing outing. It’s become a day time hang out for Dublin’s homeless population. There were people who looked really sick from drugs pale, yellowish skinny faces; people drinking in corners and people wandering aimlessly making quips about us walking around with our guidebook (we were quip worthy, I concede). Honestly, it felt like some kind of scene from one of those post-apocalyptic films; it was really sad but also, not relaxing.

When we got home, herself had returned from school. She did a mock French oral at school. It went well.

I had ordered a birthday dinner in from Etto and it was really excellent. And then we had the rice krispie cake. What’s not to love? 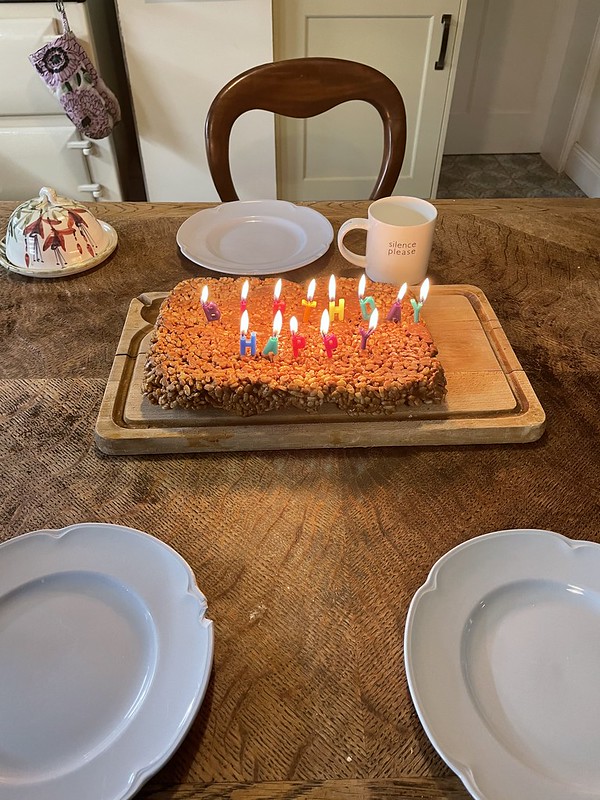 We also talked to the Londoners who had moved house that day and so had actual, live, bona fide real news. We got a tour via Skype of the new house but I can’t wait to visit in real life.

The cleaning rota was deployed again. We all hate it but most of us think it’s worth it.

Herself and myself have started watching a German series on Netflix called “Zeit der Geheimnisse”. Honestly, I think it would be confusing in English but we are dutifully watching in German with German subtitles (oral prep) and all the twists and turns are definitely keeping us on our toes.

Ireland won in the rugby beating the old enemy, perfidious Albion. Daniel was pleased. My brother watched it in Cork with two friends who have been vaccinated. This is in breach of the rules but I haven’t the heart to blame him.

For film night, I had planned to bring to the audience a three hour epic (and indeed had paid Mr. Waffle’s money to google play to rent it) but dinner was late and I switched horses mid-stream and rented “Little Miss Sunshine” and put that on instead. Everyone loved it and came in at a handy 1hr 42 minutes. It came out in 2006 and Mr. Waffle swears he has never seen it before but who did I see it with then leaving him to mind our 3 children under four? A mystery.

I have no idea what I did today other than a lot of walking around the block. I see that a certain anti-lockdown spirit is animating local fly posting. 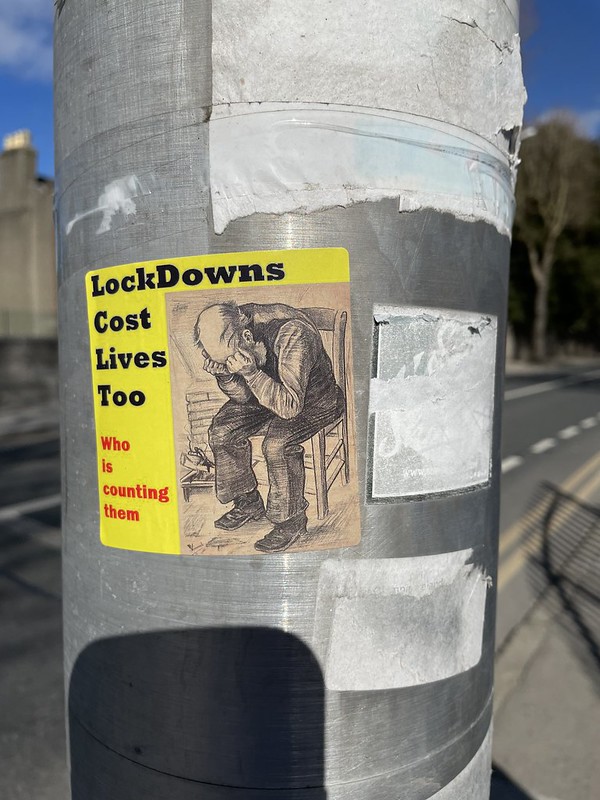 I also agreed to play a board game with the boys. They were merciful to their father and me and the game they picked was short and not very complicated, it’s all we’re able for. Herself and myself had more of our Netflix German secrets show. Very tiring; she had to get out a piece of paper and draw a family tree for us to follow it.

Let me have your lock down news and, pretty specific this one, if you have a recommended series in German on Netflix, let me know.